Noita is a very giffable game. The official Twitter account for developer Nolla Games has a lot of cool gifs. Explosions. Acid. Ice. Rats. Noita is that game where every pixel in the word is animated. You can explode, burn, melt everything you see, as a little witchy character exploring a procedurally generated dungeon. I was sitting around a laptop on the floor with the devs, and people kept stopping to look, because the whole screen was a mass of destruction fireworks. In his preview, Alec (RPS In Peace) described it as "magical melting nightmare".

Nolla Games is actually three very nice lads, Petri Purho, Olli Harjola and Arvi Teikari, who have all made games individually (the most famous are Crayon Physics Deluxe, The Swapper, and Baba Is You, respectively), but have also been working on Noita for six or seven years at this point. They only decided to make things more official as Nolla Games relatively recently.

As a layperson (read: does not actually make games herself) I would have assumed that most of that best part of a decade was spent on building the game’s engine, which is called Falling Everything. It is a very appropriate name. In fact, what they found harder was making a game out of that engine that was also fun.

“With tech, the questions you have to answer are easily falsifiable. So if you have water, and it looks like water, and it runs at 60 frames per second, that’s good enough!” Purho explained to me. He gave a talk at GDC this year that goes into the specifics of the tech in more detail, where he says that 90% of the engine is a simple set of instructions that tells a pixel where to look to determine where to go next. A pixel you say is made of sand, for example, will look to the bottom right and bottom left, and if either of those spaces are empty it will move there. And then you’ve got sand that will form a neat, sandy pile if you drop it somewhere. 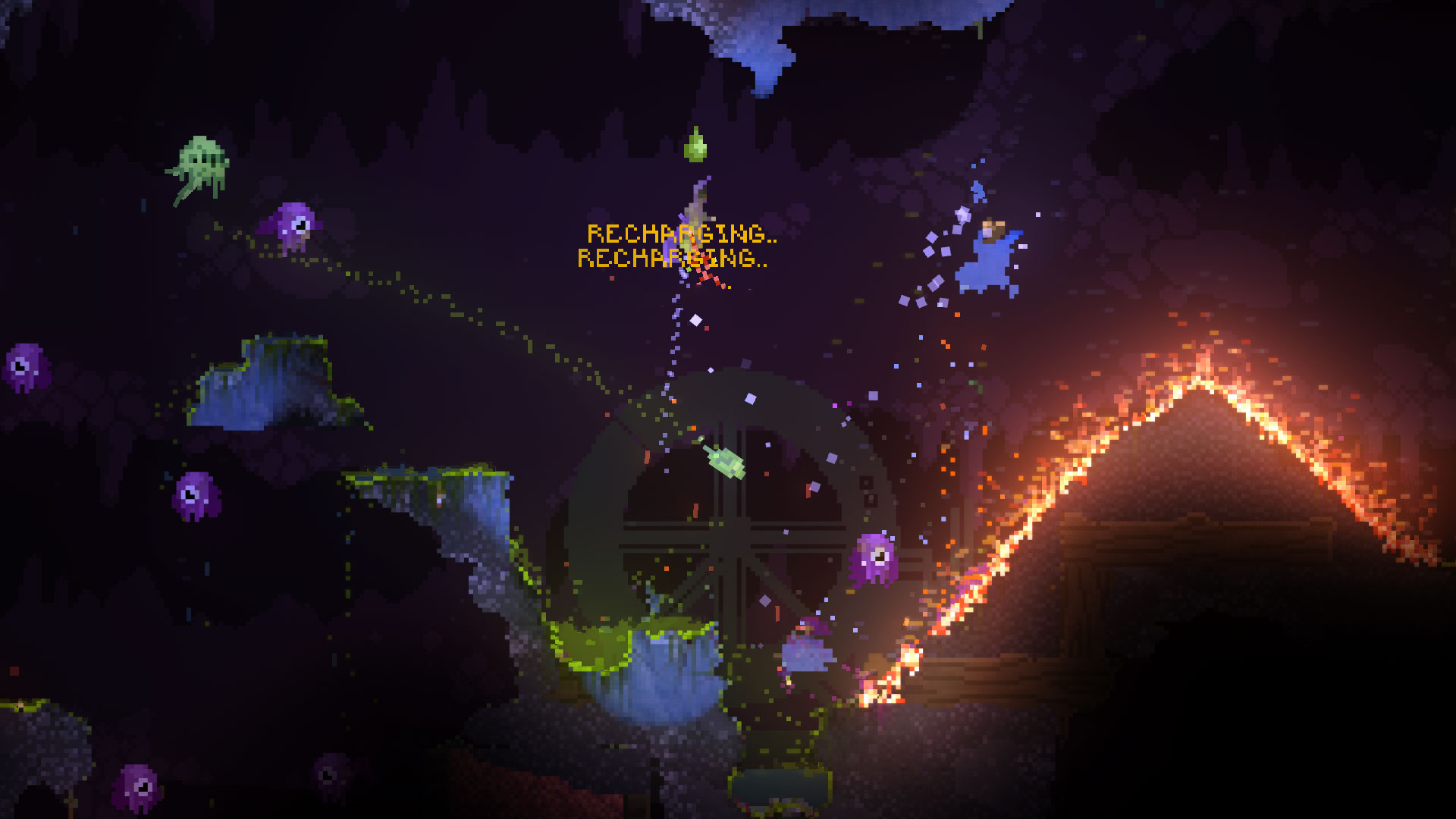 Not that there weren’t some technical challenges. Teikari remembers that combining that system to work with rigid bodies, like crates, barrels or trees, was a difficult task for Purho early on, and scaling the engine up to work across a continuous world was another hump to get over. But a lot of time was also spent on iteration because, as Purho said, “‘Is this fun?’ is more of a subjective thing.”

“It sounds like every kind of game you could make using this would be super awesome,” said Harjola, (who also showed me a fun Easter egg for Baba Is You that he put in the game to congratulate Teikari on its release). “Apparently it’s totally the opposite. The simulation makes it really hard to design robust and playable games.”

Teikari said they spent at least two years just trying out different ideas, listing some of the early versions of Noita that were discarded: a kind of Black & White game where you played a god who could guide, or frazzle with lightning, a tribe of people; a kind of 2D Fallout game where you explored underground vaults; a crafting-heavy game like Minecraft or Terraria. They’ve come out of the other side of that with a roguelite permadeath explosion-crawl through a procedurally generated dungeon full of weird enemies. You can find magic wands that have randomised abilities, and eventually modify spells that combine abilities to do different, weird things. To keep the effects going, the game tracks several screen’s worth of game outside of what you can see. At one point I ran into a huge cloud of acid gas, boiling it’s way up from the tunnels below me and eating through everything. Probably, it was explained to me, a wand had generated with a spell like Sea Of Acid, and an enemy had used it off screen.

There are some rules to Noita, and some structure in the form of portals that lead you onwards and a shop to buy new stuff. Purho explained to me that emergence actually comes in two “flavours”, the good fun interesting stuff, and then the game breaking parts that people forget can happen. In Noita they try to make it so that destruction actually keeps the game together and minimises the breaking. But you can still find a spell that fills the entire screen with lava, because that’s really fun to do sometimes. And if it blocks your way forwards, well, it’s a permadeath game that generates a new world for each life, so your progress being destructively ended is par for the course. 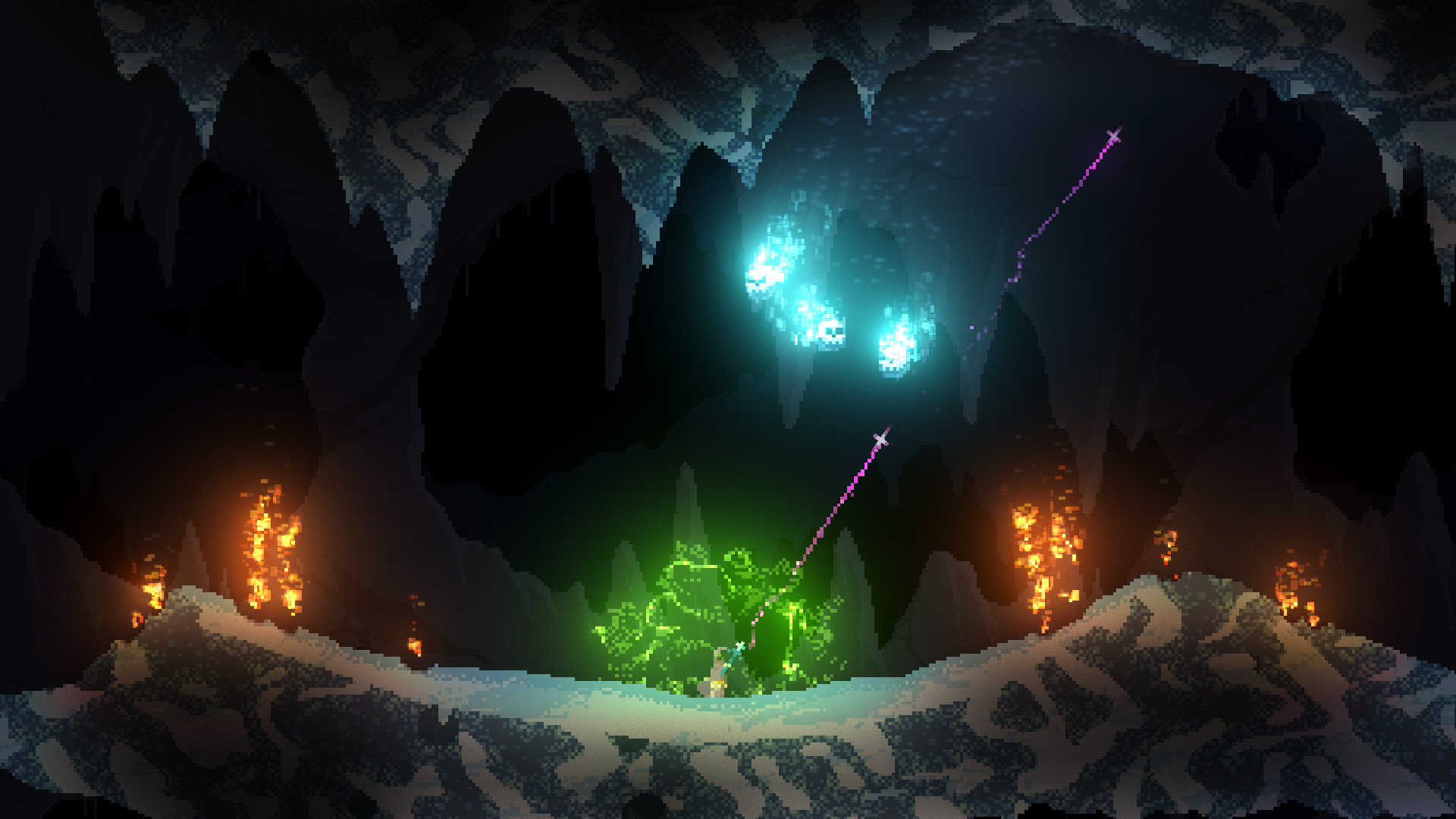 I found Noita really difficult, but not annoying in the way that I find most roguelikes, because even in failure I would do something like accidentally set fire to a pool of oil, or run through a pool of acid and accidentally explode it whilst trying to escape. I didn’t get past the first area, but ran into every new attempt ready to clap and laugh like a seal again.

Noita does loads of cool stuff that you assume was coded in deliberately, but is actually just emergent chaos creating a kind of order. Teikari pointed out that heat will make water in the game evaporate, but if it hits a ceiling it’ll condense and start falling back down as indoor rain, which he described as “seldom helpful, but interesting to look at.”

Some enemies throw potions at you, which smash if they hit a hard object, or float if they hit liquid. But the liquid inside is also accounted for, so breaking the bottle in mid air makes the potion spill everywhere, and if it lands in liquid some will seep out and there’ll be less potion left. That didn’t exactly happen on purpose, but they made an enemy who throws potions, where potion bottles can break, and they have liquids in them. But when those elements all come together in the Falling Everything engine, everything else just… emerged.

They’ve actually had to put a few steadfast points in what Purho calls the “emergent randomness” of the physics. The caves have oil lamps that, originally, wouldn’t always explode when shot by the player. Now they always will, which means you can plan around them. Or just know you can always make a nice explosion. 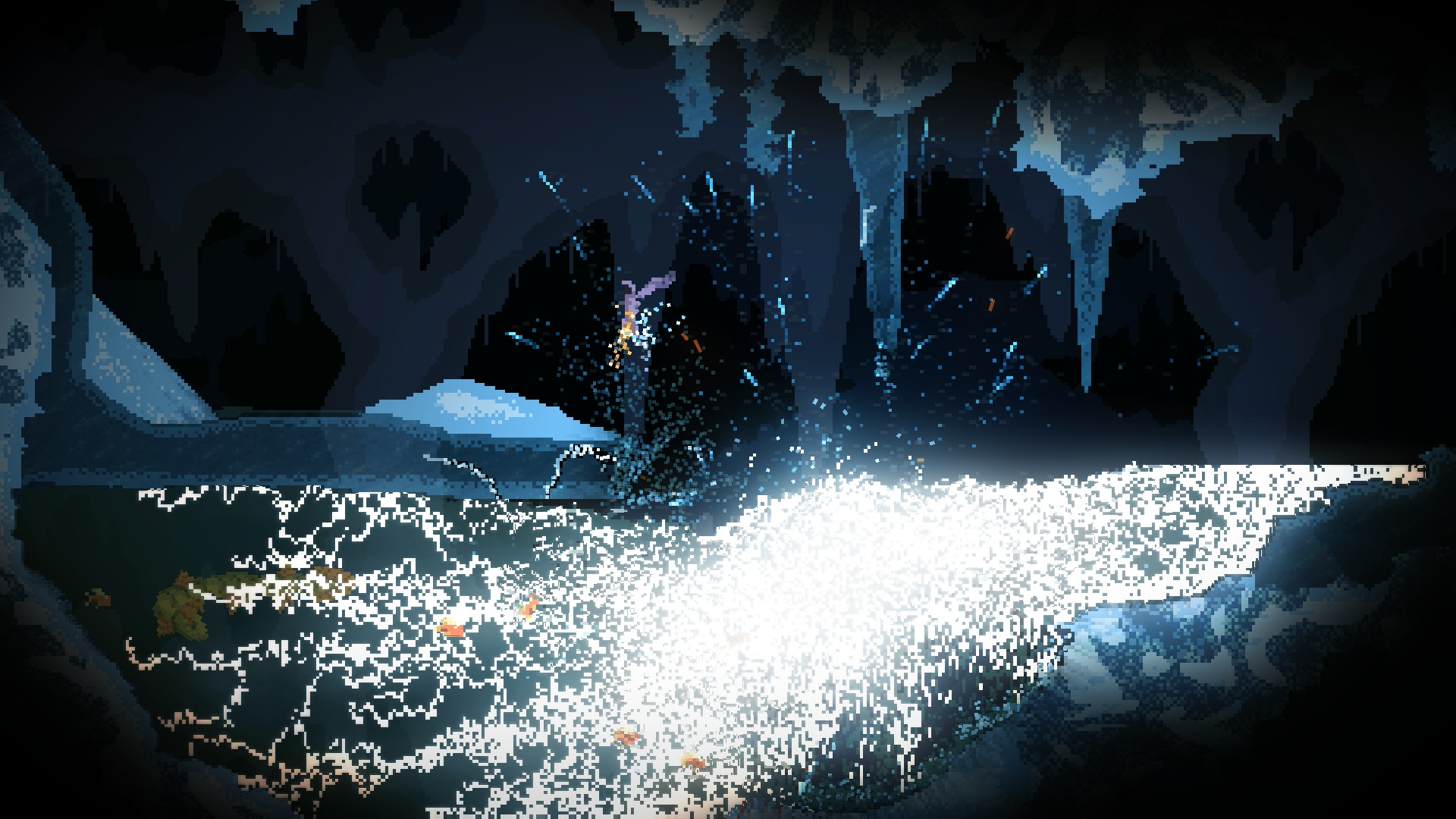 Harjola is looking forwards to when the game is out, and “seeing what kind of things people find in the game that we have not planned at all.” So far they’ve been testing with a relatively small group of players, but Purho has already had people mistaking bugs for features. There are a bunch of hidden things in the game that they didn’t think could be found by one player in one run, but Sarah Northway emailed Purho letting him know she had. And that one of them was broken.

“I still find it very hard to believe because it's a really big undertaking!” said Harjola. “You have to dig for like two hours --” His teammates started making internationally recognised shutupshutupshutup noises. “-- I’m not going to say in which direction!”

“No hints for anyone!” said Purho, firmly.

My instincts tell me that, by the time it comes out, Noita will have a few more hidden surprises buried in it. Or you could just keep making your own, which seems infinitely possible with Falling Everything.