If you click on a link and make a purchase we may receive a small commission. Read our editorial policy.
Developer: Obsidian Entertainment
Publisher: Private Division

There are a few times, during Obsidian's rootin' tootin' shootin' lootin' first person space cowboy RPG The Outer Worlds, where the game lampshades the tropes it uses. One of them really stood out to me. An information broker asked me to clear the airwaves he used for his radio signals, meaning I had to convince two rival faction leaders to stop broadcasting. This meant having to do a task for each of them, with each task involving a sub-task.

When I handed the quests in, they both had more errands. And so on and so forth. When I finally returned to the broker and he asked me to reset his satellite relay, I was like "Oh, I bet I have to press three different switches now or whatever", and he was like "No, don't be ridiculous, that is a stupid system, who would design that, it's just one button." And while it's all very well to put that little joke in your game, it won't change the fact that the rest of it is all about finding sets of three switches. 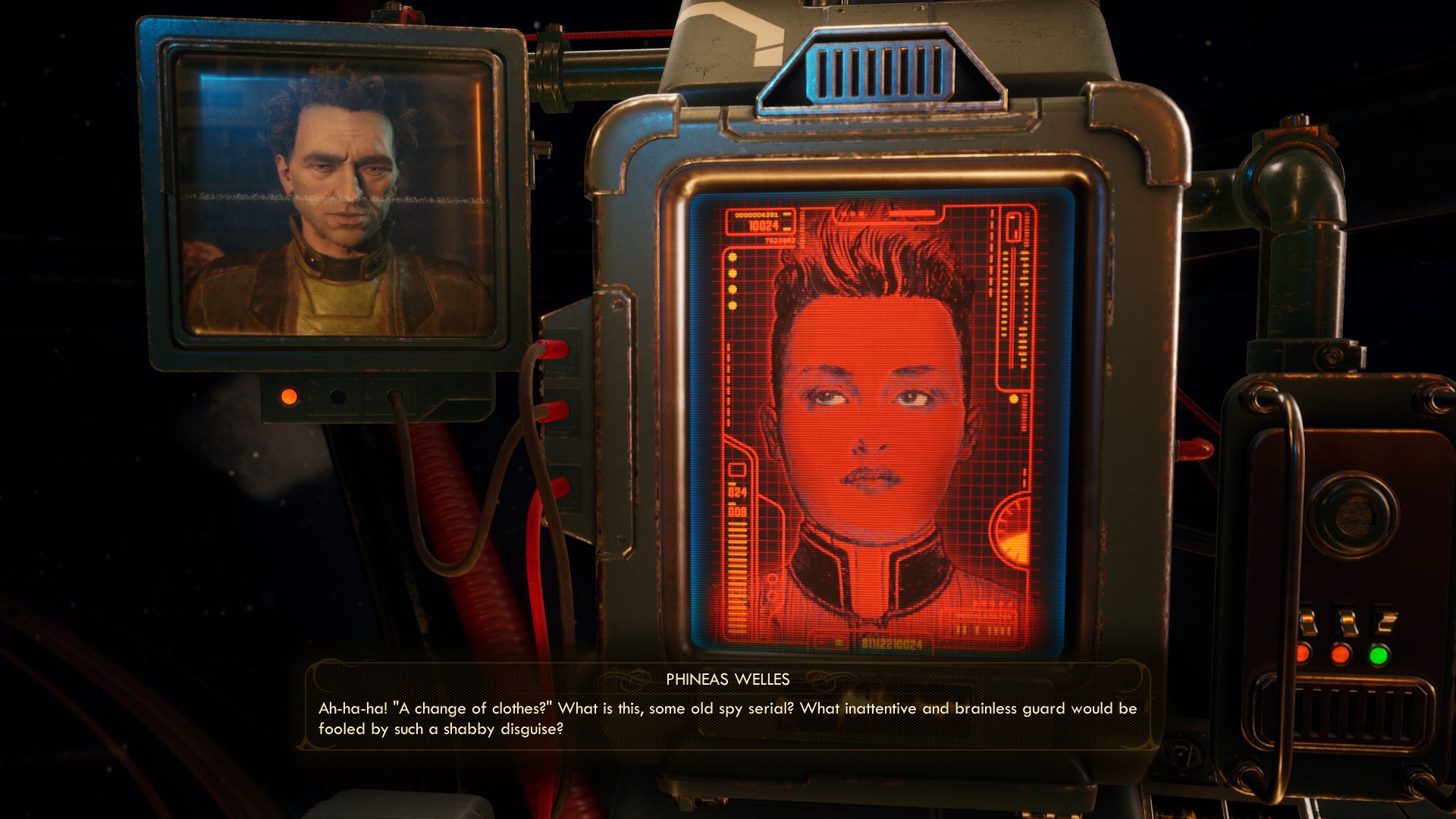 In classic Obsidian style, you play as a sort of chosen one, mostly because everyone else is so inept they can't even buy their own hangover pills (this is genuinely a pivotal part of a main story quest, by the way). You are the only colonist successfully reanimated from cryosleep aboard the colony ship Hope, which ended up dropping out of lightspeed and doing the last bit of its journey to the Halcyon colony planets in real time. This took 50 years, however, during which time everyone got on with doing space capitalism and indentured corporate servitude without you.

The Halcyon colony is in a bit of a state. Almost everyone and everything is owned by one of a number of corporations, which operate in an insane tangle of bureaucracy, and whether you're on the inside pissing out or outside pissing in, you're probably starving to death. Friendly mad scientist Phineas Welles is tired of this, and woke you up without the permission of the mega-corporate business baddies on The Board, with the broad aim of getting you to fuck shit up, and then eventually unfreezing everyone left on the Hope.

You decide how you go about this during character creation, which has some fun space makeup and big noses to choose from. You decide your rough focus by setting Body (punching, dodging), Mind (thinking, noticing) and Personality (talking, leading) attributes -- which do not change as you progress -- and then fine tuning by distributing skill points, which you get more of as you level up. Skills include your different combat abilities: hacking, sneaking, persuasion, all that kind of stuff. You can level them up to 100 points, with milestones granting new buffs and debuffs every 20.

This all sets how you'll experience the game largely in stone. While you can, admirably, complete almost every mission by using either combat or not-combat approaches, you won't level up enough to be good at everything -- though I should say that you probably can't avoid combat entirely. Even avoiding most of it will entail a lot of slow crab-walking through grass or hiding behind bins. Luckily, you can collect six different companion characters (tanks, a medic, an engineer, and so on) to cover your weaknesses. Even so, I had much more fun putting points into shooting, though it's a bit "click to produce numbers".

The Outer Worlds has Time Dilation, see, a purply slow motion ability that's a big copy of Fallout's VATS system. Basically, the only point in having that is to snipe someone's leg off before they even know it's flown off into the bushes behind them. My spacer, Del, was kind of a Han Solo type -- charming, but a dead shot. I got into a politician's home by persuading the post office to hand over a parcel for him (which would normally have taken 35 years to arrive with the requisite forms), and then persuading the guards on the door that I was a real delivery person. Once I was inside, I shot everyone else in the face with a shotgun. Excellent. Pew pew.

But once you've decided what sort of gently defrosting rube you are, you notice the grind after a few hours. You rock up at a new location (a township or district or space station) and explore. You encounter the factions at play, who are generally served in either Corporate Stooge or Rebel Outlaw flavours. Still, you sometimes find a caprese salad side dish in the form of people who are Neutral And Out For Themselves. By asking around, you get jobs to do. 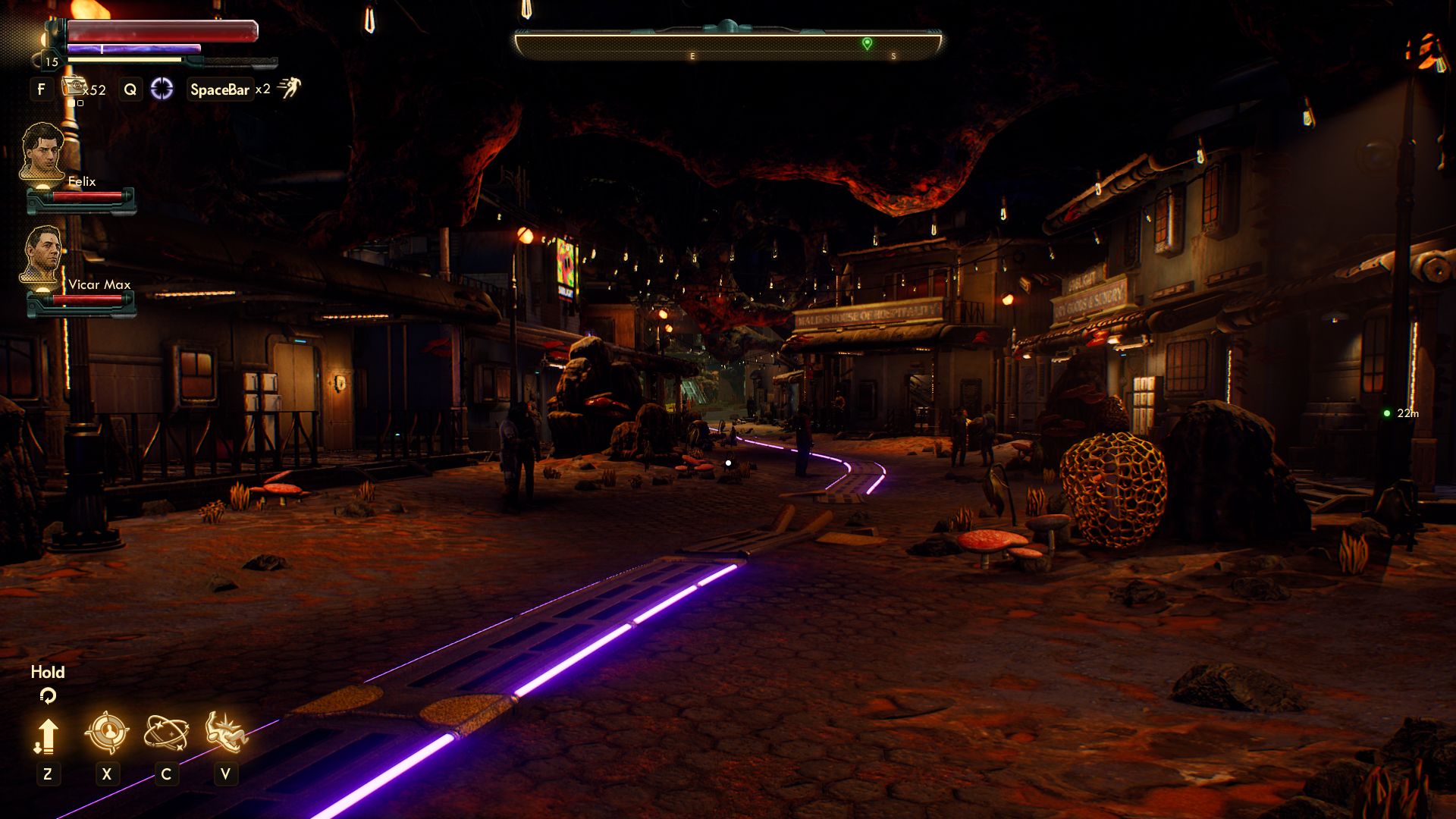 You make your way through the local population of factionless marauders, swivelly robots, and giant angry fire insects/acid iguanas/rock gorillas, retrieving what you were sent to retrieve. How you retrieve things and who you eventually give them to will raise or lower your standing with the factions. At some point, you realise you've accidentally completed the story mission for an area. Usually, but not always, you will be presented with a choice that ultimately helps or hinders one or other of the factions.

Oh, sure: in one town the rebels will be a sort of hippy commune growing their own tomatoes, and in another they'll be a weird religious fringe group - but the parts of the process still feel the same. It's the biggest annoyance in The Outer Worlds, and it's more noticeable because a lot of everything else is identical too, aside from a few "ooh look at this" vista reveals. You'll probably run into a lot of people with the same haircut as you, too.

It's not that it's not, you know, a romp, but it can't stop nakedly doing impressions of other things you like, like a kid at school going "What do you like? Yeah I like Douglas Adams too! 42! Belgium! Hahahah!". Like the Time Dilation I mentioned earlier, and the way the screen zooms into peoples' faces when you have a conversation, and the CRT-ish computer terminals with messages between employees, which are all clearly cribbing from newer Fallouts. 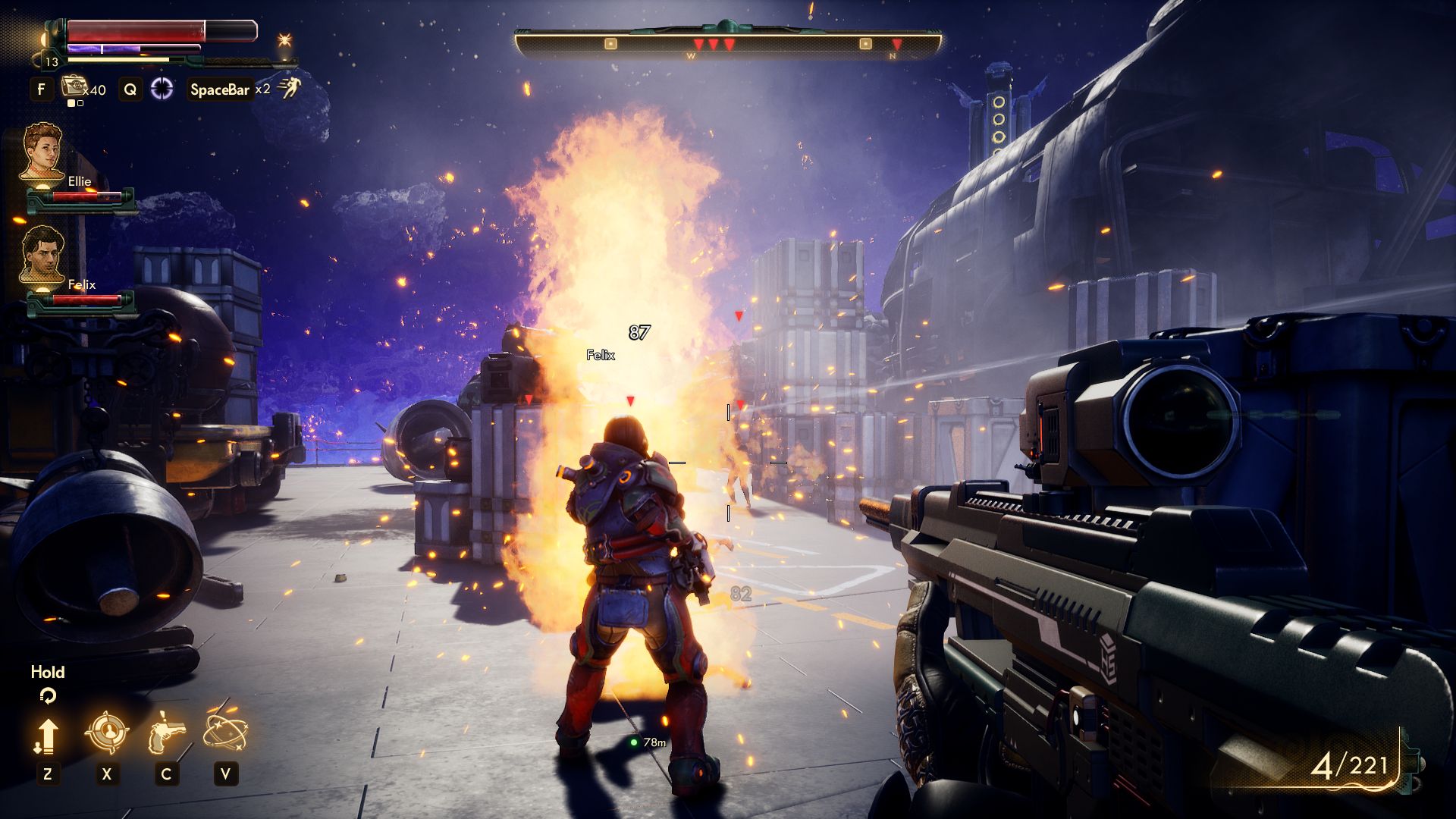 Did you enjoy Knights Of The Old Republic? Because one of your companions is a fun robot you've modified to kill people. What about Borderlands? Have fun killing masked marauders as they run at you brandishing big hitting sticks, and picking up lots of guns! Fan of Firefly? You'll love the stark contrast between the grubby spacers living on the edge of poverty in their nu-old west towns, and the bumbling asshole rich guys with bolo ties in charge of it all. Also one of your companions is a priest with a past, and another is a sweet engineer gal in overalls with a southern accent. I dunno what to tell you.

It even has a selection of greatest hits in the side quests. Count 'em off: overly friendly family who are definitely cannibals; my parents died and I am a weird man-baby murderer now; smuggler trapped in a cave; hack them robots!; dangerous cross-species experimentation in a secret lab; bring me that specific kind of pie.

When The Outer Worlds does travel in more original directions, it's great! Probably my favourite thing in the game is a kind of devil's bargain system, where you can accept a Flaw, brought on by context in the game, in exchange for a valuable Perk point (that is, a powerful buff ability). I got attacked by a bunch of robots and chose to accept Robophobia, meaning I suffered penalties whenever I was around a mechanical bruiser. But then I fixed up the aforementioned robot companion SAM, and discovered that if I had him in my party I was permanently terrified, which I loved. I then accepted almost every flaw I was presented with. It's a relatively small system change that ends up being mad fun. 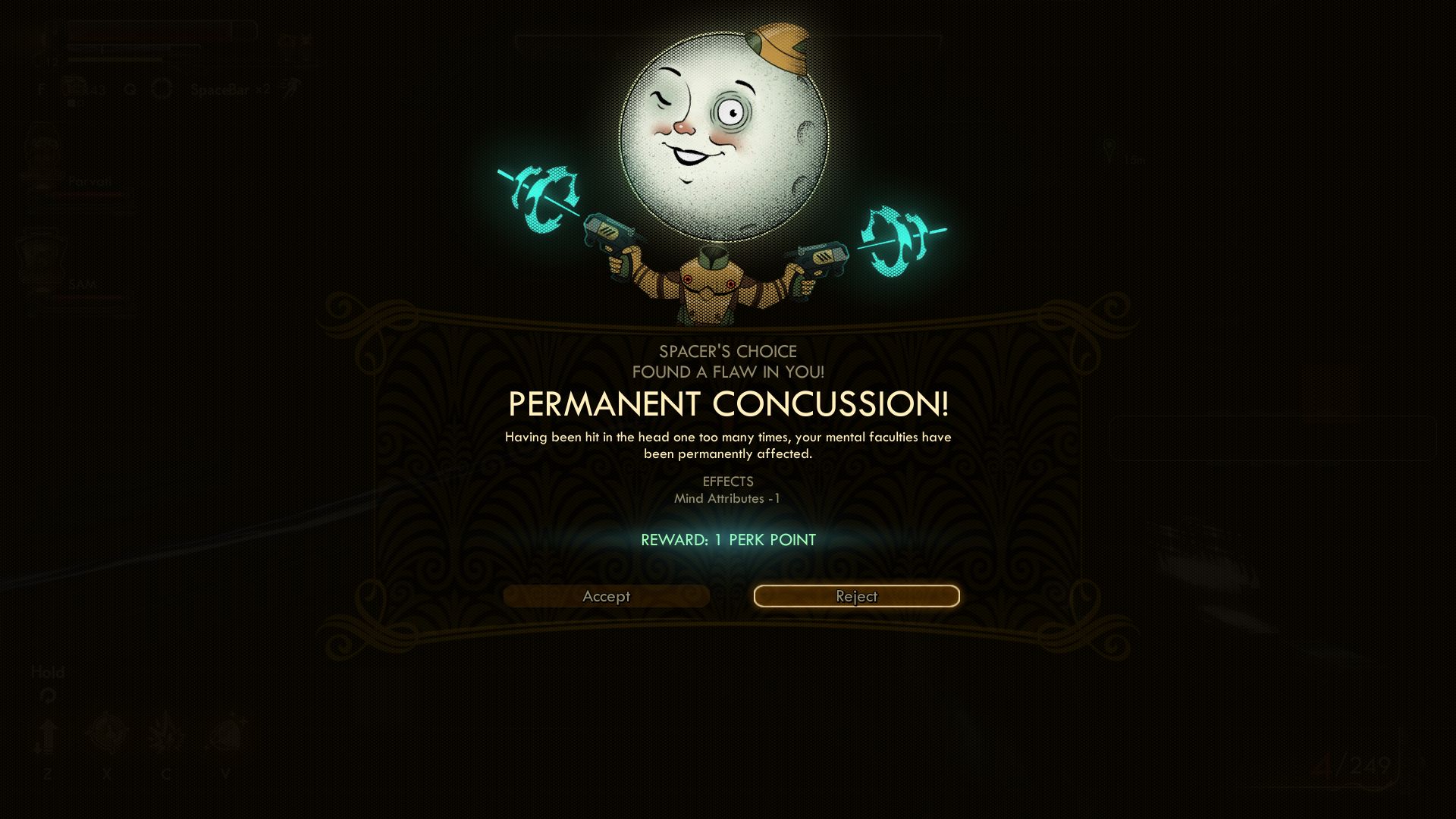 The skewering of corporations is low hanging fruit, but The Outer Worlds' sense of humour is way less scatological than Borderlands, and has little subtleties -- like, one of the loading screens has text that says something like "Your tutorial tip here!" like those ads on the back of toilet doors in a Wetherspoons. All the corporate lords are men who are a bit shit at their jobs, while the rebel and indie factions are lead by strong women(™), which I enjoyed even if my eyes began to roll sometimes. You can, at any point, betray Phin, and do the whole game working for the Board. Parvati, the explicitly asexual engineer, asks you for help setting her up on a date with a fellow woman engineer. There's a dude who constantly says the word wink, instead of actually winking, and you have the option to just punch him in the face. You can spend the whole game being an unrelenting asshole to everyone, in fact.

The Outer Worlds is alright, innit. It's good fun. Sit back and let the orange and neon wash over you. Boo the cartoonishly evil corporations. Exhale through your nose at their Diet Toothpaste. I bet I'll play it again, in fact. But you can tell it could have been great, if it had taken a few more risks. Real space cowboys take risks, don't they?