I've just seen a game that reminds me of Deus Ex. It's set in a dystopia where corporations call the shots, and you can approach situations how you see fit. Guards can be persuaded, tricked, intimated or shot. Robots can be hacked. Sewers can be snuck through, if you can first lockpick the entrance.

There are no punks in sight. I'm talking about The Outer Worlds, a first person sci-fi RPG from Obsidian Entertainment. I only got a hands off peek at E3, and one carefully curated slice might not represent the whole cake. But gosh, that slice looked delicious.

We’re in the wild west, but we’re also underground, and also on an alien planet. We're in the town of Fallbrick and the world of Monarch. It immediately feels very Firefly, an inspiration narrative designer Dan McPhee was quick to point to in our later interview. Fallbrick is yer classic hive of scum and villainy, the E3 presenter tells us, and we’re shopping for a job. 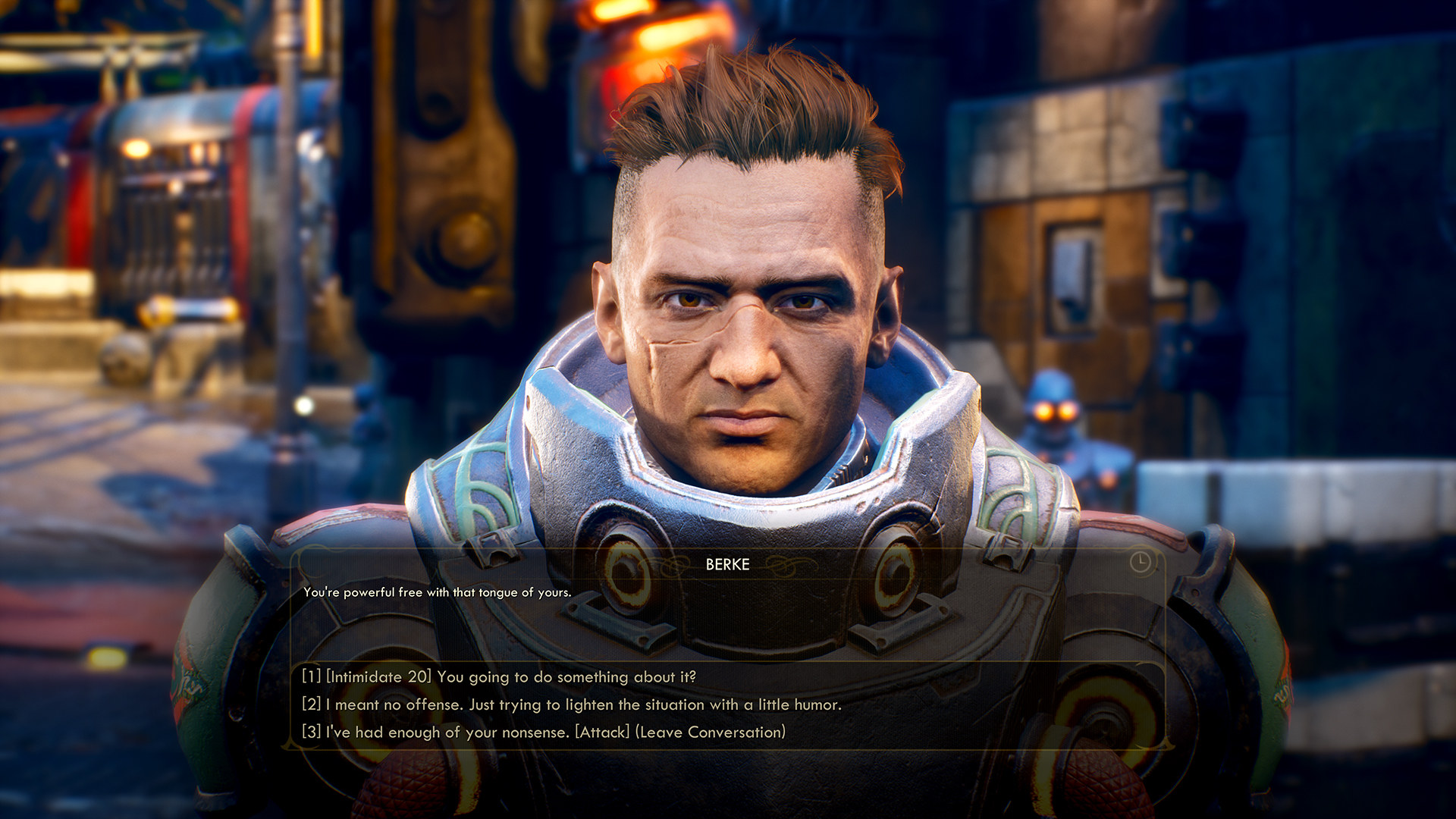 He then immediately dives into how "entire branches of quests might only be available if you have the skills to unlock them". In the demo, we only manage to pick up a quest by convincing a 'business' owner that we're trustworthy. We could also have threatened to beat her up.

She wants us to deal with a rival's factory, and she doesn't care how we do it; we might want to sabotage the factory, or just kill the poor fella. We resolve to decide when we get there.

As we walk, the presenter proffers some lore. We get a bit of background on this particular planet, which was once intended as an earth-like colony. The terraforming went awry, and turned the wildlife bigger and nastier than it has any right to be. Giant mushrooms dot the yellow-specked countryside, and overgrown mantises skirt around the edges of town. 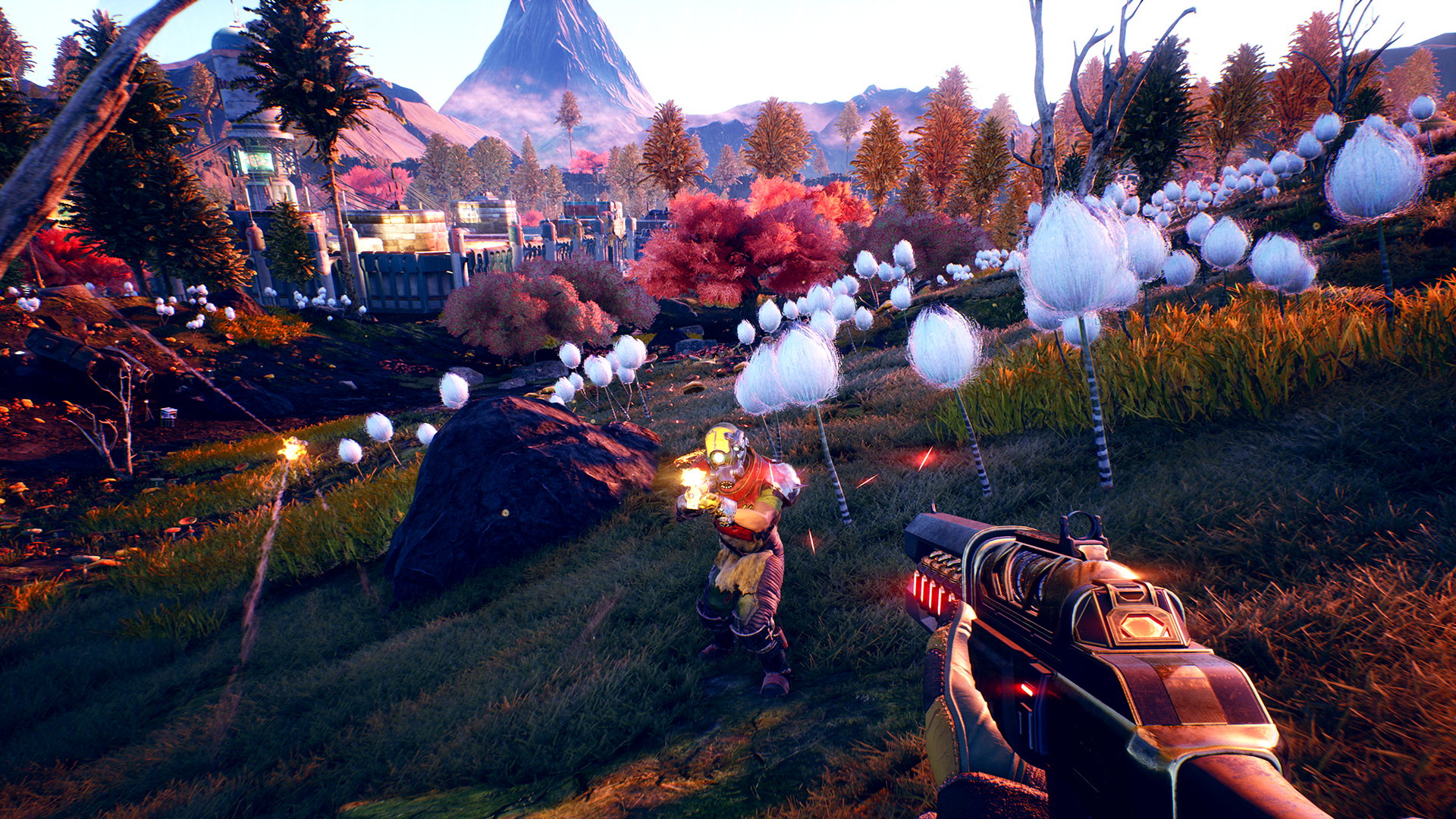 Some entrepreneur managed to buy the whole planet, which lead to the corps not letting anyone on the planet trade. I'm aware that in real life I also ultimately work for a modern day megacorp, but I still enjoyed seeing a company like Microsoft-acquired Obsidian explore the pitfalls of big companies gaining too much power - and couldn't resist bringing that up with McPhee.

"To be fair, we do try to provide both viewpoints," he said. "At the start you're rescued by someone who's very anti-corporate, but then you go through a town that's still owned by a corporation. Those people talk about the benefits of that and how cool life is, and you can flip sides and start supporting them instead."

But there's no time to dwell on that. We left town, and immediately bumped into some marauders. Our companion vaporises one of them with her special ability, and we shoot the rest. This is our first taste of time-dilation, an ability that lets you slow down time. McPhee describes it as a more active version of VATS shooting from the Fallout games. You can take out people's limbs to make them crawl or drop their guns. I'd be surprised if I don't still always end up just shooting at heads, but it's nice to know I'll have more options if I get bored.

I'm hoping I won't. Every gun demonstrated comes in some flavour of laser, plasma or electro-enhanced-bullet. I particularly like the look of a charge up rifle that eliminates most enemies in one hit.

Even better, though, are the situations where you can avoid combat entirely. We approach the factory we're supposed to dismantle, and look about for the sewers. They're behind a waterfall, but we can't pick the entrance's lock. We head to the front entrance -- but we don't go in guns blazing. Instead, we use our automatic disguise kit to cross into the restricted area. The guards are still suspicious, but they'll give us a chance to explain ourselves.

One wants to see our papers, but we’re good enough at lying that she buys our story about it being our first day on the job. It crossed my mind that when I play the full game I might run into the Deus Ex problem, where I wind up going back, killing everyone, and hacking everything in order to max out XP. McPhee reassured me that they hand out XP every time you use a skill, so in the demo we could have levelled up by running our mouth.

Disguises have limits, it turns out. Our disguise will run out if we loiter too long, or get interrogated three times, and it'll get harder to talk out way out of trouble with each encounter. It's a blend of sneaking and blustering I can get behind, especially when it dovetails with some hacking. We reach a terminal that lets us turn the robo-guards on their human overseers, then fight our way through the ensuing chaos. 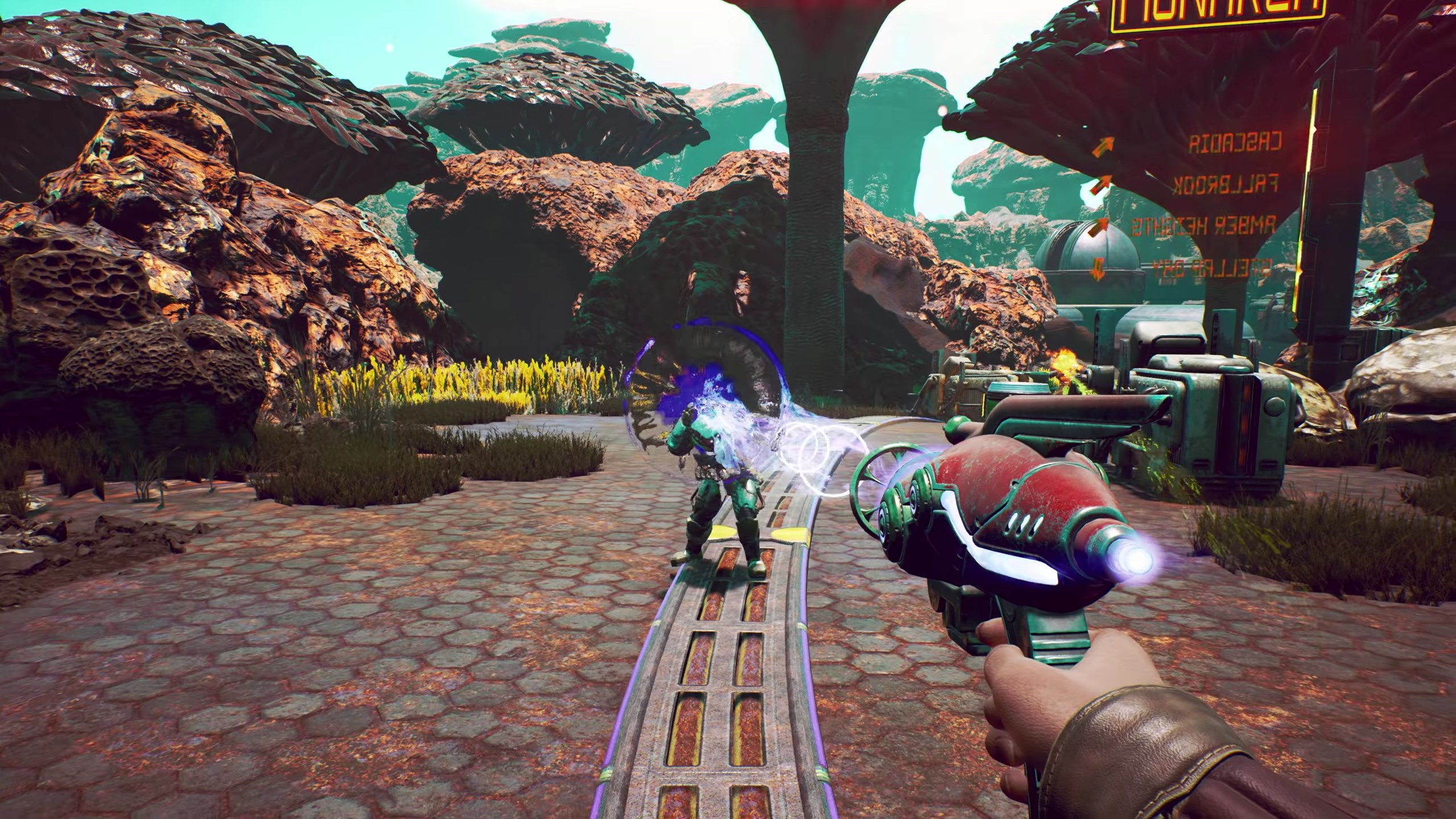 At one point, we take enough damage from robots that we get the option to become scared of them. This is the fear system, which lets us choose to make certain enemies permanently tougher to fight, in exchange for a perk point. We weren't told exactly what perk points do, but I know I'm a sucker for that kind of devil's bargain. I'll probably be a gibbering wreck by the end of the game.

When we finally find the man we're after, he tries to get us to turn on our employer. Though not before first telling us, for some reason, about how much he likes to tuck into more than pork from the "Cysty-pigs" his factory has been farming. Those are pigs that have been engineered to grow bacon-flavoured tumours, and we're being offered a lifetime supply of the stuff. We could also try to broker a peace between them - though the demo ends before the presenter makes his choice.

I'm in two minds about the humour. It's a constant presence, and almost every line is tinged with glibness. The dialogue often made me smile, never made me laugh, and sometimes felt awkward when a joke didn't land. I'm a tad suspicious I'll find it tiring after longer than a half hour peek, but I'm also hopeful that worry will prove unfounded. If my half hour on Monarch was even vaguely representative of the other Outer Worlds, I know I'll enjoy exploring them, whether I'm laughing or not.