You look weary, friend. Is it all these great games? I've got just the thing. Pull up a stool and let me serve you a drink.

It's The Red Strings Club!

Matt C: Would I want to visit The Red Strings Club? It’s a classy place, with gorgeous piano tinkling and and drinks that put you in touch with the roots of your soul. That’s no exaggeration - the bartender plays his patrons like an electric fiddle, nudging their mental states towards the answers he seeks. He’s an information broker, and most folks know something about the conspiracies that whirl outside his doors.

Those conspiracies involve brainwashing, AI and cybernetic implants. Shadowy figures are bent on rewiring humanity to eliminate prejudice, depression - and inevitably, freedom. Hang around the club for long enough, and you might start to think they’re onto something.

That’s largely because the Red Strings plays host to one of the most interesting characters I’ve ever met. Akara is the world’s first ethical android, and she wants you to know about it. Maybe drugging your customers is an ironic necessity when unravelling a plot about neurological manipulation, but there’s no way that’s going to pass without comment.

It’s a game about questioning assumptions, and not just when you’re playing detective. It’s the most explicitly philosophical game I’ve played since the Talos Principle - and that mostly involved absorbing dialogue rather than participating in it. Akara quizzes you after every encounter, testing both your intuition and your moral compass.

Technology can set that compass spinning. Who’s to say that ridding the world of mental anguish is an evil act, and who’s to say that it isn’t? Should we change what it is to be human, or should we be left free to suffer? There’s more philosophical meat here than at one of Kant’s dinner parties.

I wrote my university dissertation on whether we should turn to AI for moral guidance, and struggle to convey the thrill of playing a game that asks the same question.

Alice Bee: Matt will definitely have written about philosophy this time. The Red Strings Club is fabulous. My favourite thing about it is that it’s all hands on. Normally when I play something that’s about the terrible advance of technology, it’s about how humanity becomes removed from actually doing the stuff that gets did. You just press a button and your computer does whatever the queued action is.

Because it was the sort of upbringing I had, we used to go to the RAF Fairford Air Tattoo most years, and one year we were talking to an American pilot, who flew one of those big transport planes. He said that the crew used to be bigger, but as technology got better you needed fewer people to fly a massive plane. And he didn’t mistrust the technology, he just felt a bit safer with more people on board in case the tech stopped working. Like when you enter a signal dead spot and can't access Google Maps and really wish you had someone who knows the area because you have no idea where you are and you’re pretty sure you’re going to die. 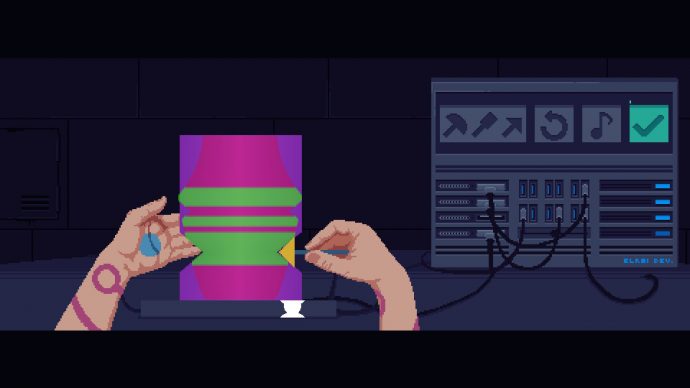 The point of that story is that in The Red Strings Club technology is super advanced but still made by hand. In the first section of the game you’re an android, inserting implants into people to change their lives. One of them can somehow give them more followers on social media. The people come through on a production like, hanging on a conveyor and totally naked. It’s very impersonally personal. But the implants themselves, that have the power to change a person’s core beliefs and personality, are crafted on a lathe, like pottery. Your job is to make them into the right shape. As if we figured out the secret to life-altering technology, and it is: this specific angle combined with this curve will make you not care about the opinion of others.

This sort of thing runs through The Red Strings Club like some kind of long thread. The actions of people are tied up in technology because, obvs, it’s what we do with technology that makes it good or bad. Unfortunately a lot of people are shitheads.

Katharine: Those cyberpunk pottery sections Alice mention above are my favourite parts of The Red Strings Club. You've just hacked an android responsible for sculpting personality modules out of clay to fix the problems of would-be clients. Or at least it looks like clay. Whatever futuristic material you're actually dealing with, you sit down at a crafting wheel and slowly ease different shaped tools in and out of chunks of biomatter stuff with your mouse to create the desired template.

Now I know nothing about pottery and have never 'thrown' an actual pot, as they apparently say in the pottery biz. But it's also something I've never done in a video game before either. It's oddly therapeutic, clicking your mouse real fast to whirr up the wheel while moving it from side to side to mould it into the correct shape, and I don't think it would feel nearly as satisfying or tactile to perform using a controller, for example.

It's a shame there isn't more of it, really, especially when the entire act is so fundamentally tied to your mouse, and therefore your PC as a whole. In fact, I'd happily play a game that was just cyberpunk pottery, perhaps against the clock or with even more tools at my disposal to make even more outlandish sculptures. Alas, what I thought was going to be a tutorial for something more complicated later on in the game like the bartending sections ended up being just that: a one-off module-making session.

Still, despite its brevity, this is anything but a throwaway mini-game. Your actions here and the modules you choose to install do in fact have a lasting impact on what happens later in the game, and it's just another thing that makes The Red Strings Club stand out as far as I'm concerned - although if anyone does know of a good pottery-making game, please do point me in its general direction. I promise I won't use it to hack your personality in the process.