If you click on a link and make a purchase we may receive a small commission. Read our editorial policy.
Developer: Frogwares
Publisher: Bigben Interactive

There are many types of rain. As we speak, the south of England is blessing us by alternating sunshine with heavy showers that are refusing to turn into a storm. Instead of clearing the air, the rain is only making it more humid. In 1920s Oakmont, the fictional town in new Lovecraftian detect ‘em up The Sinking City, the flavour of the day is constant cold mizzling, blowing into your face and impregnating your clothes. You know when a rain makes you feel mildly damp to your core? The Sinking City captures that perfectly. Private Investigator Charles Reed, his face itself like a wet Wednesday afternoon, never looks totally dry.

It’s one of very few things the game does do perfectly. It’s fun tramping around the washed out streets of Oakmont for a bit, taking note of the abandoned cars, broken windows, the mud. Seaweed is left hanging from trees, after the waters of a recent and devastating flood receded (partially at least; to get around about half the streets you have to use a whippy little boat that does sick drifts into floating debris when you turn). But you can see where the devs ran into limitations, and while they’re understandable, they have an impact. 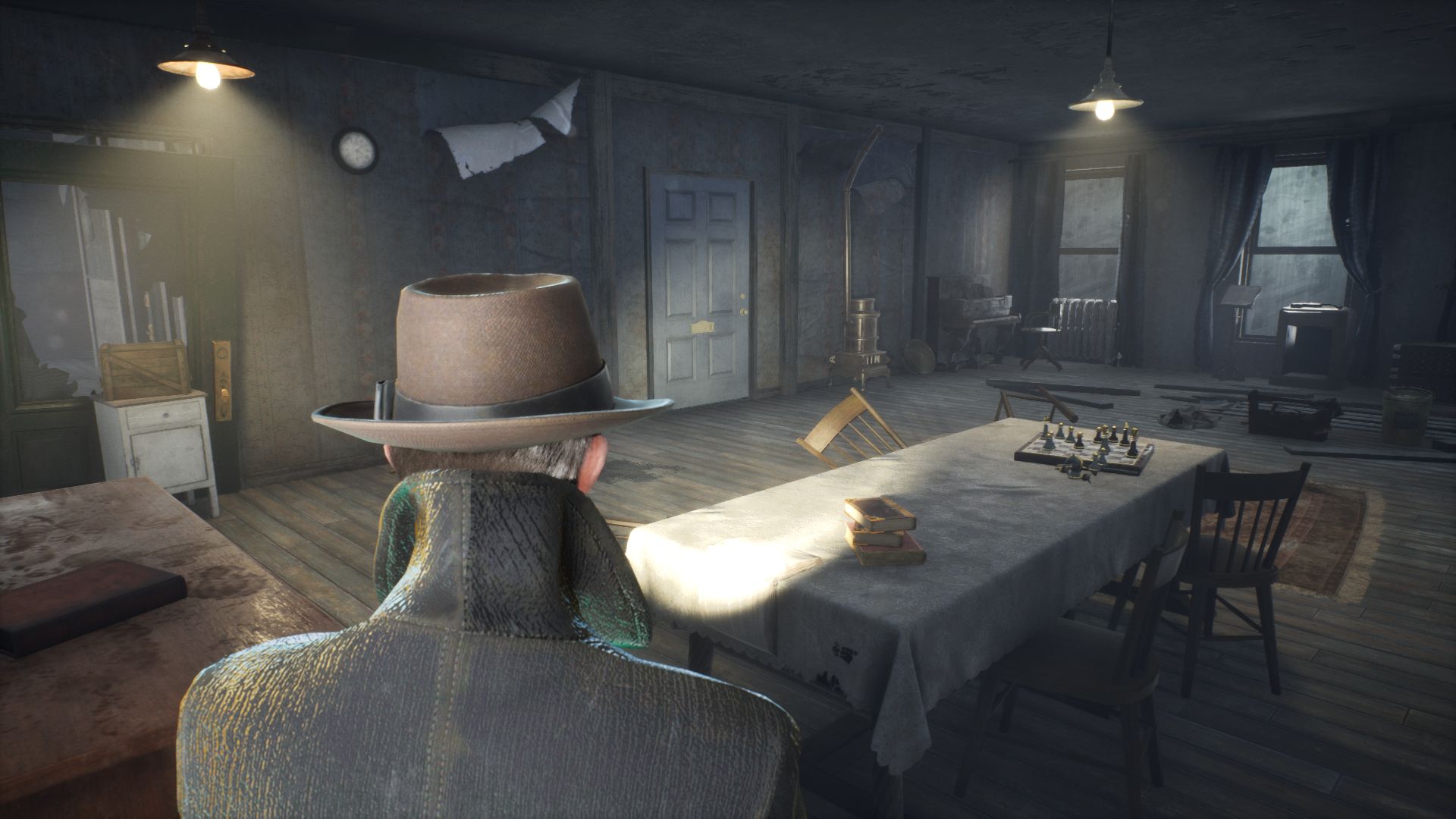 NPCs appear in groups. Occasionally you’ll see one fall a couple of feet from mid-air as you approach. Often houses will have doors on the inside that have letterboxes and knockers on them, which is a confounding interior design choice, to say the least. Houses, shops and warehouses have the same layout as the house, shop or warehouse you just visited. It undercuts the whole ‘treat it like a real place’ and learn the street names vibe’ when many of the streets look the same.

A big selling point for The Sinking City is that you don’t get automatic quest markers leading you by the nose. Luckily, everyone writes their letters, articles and even diaries by describing which two streets they live at the intersection of, so you can place them yourself. Using the map as you would in another game, opening it briefly to check your position, makes it tedious, but studying it and placing numerous custom markers yields better results. I eventually knew my way around a few key places, but never got to know the city like a local. 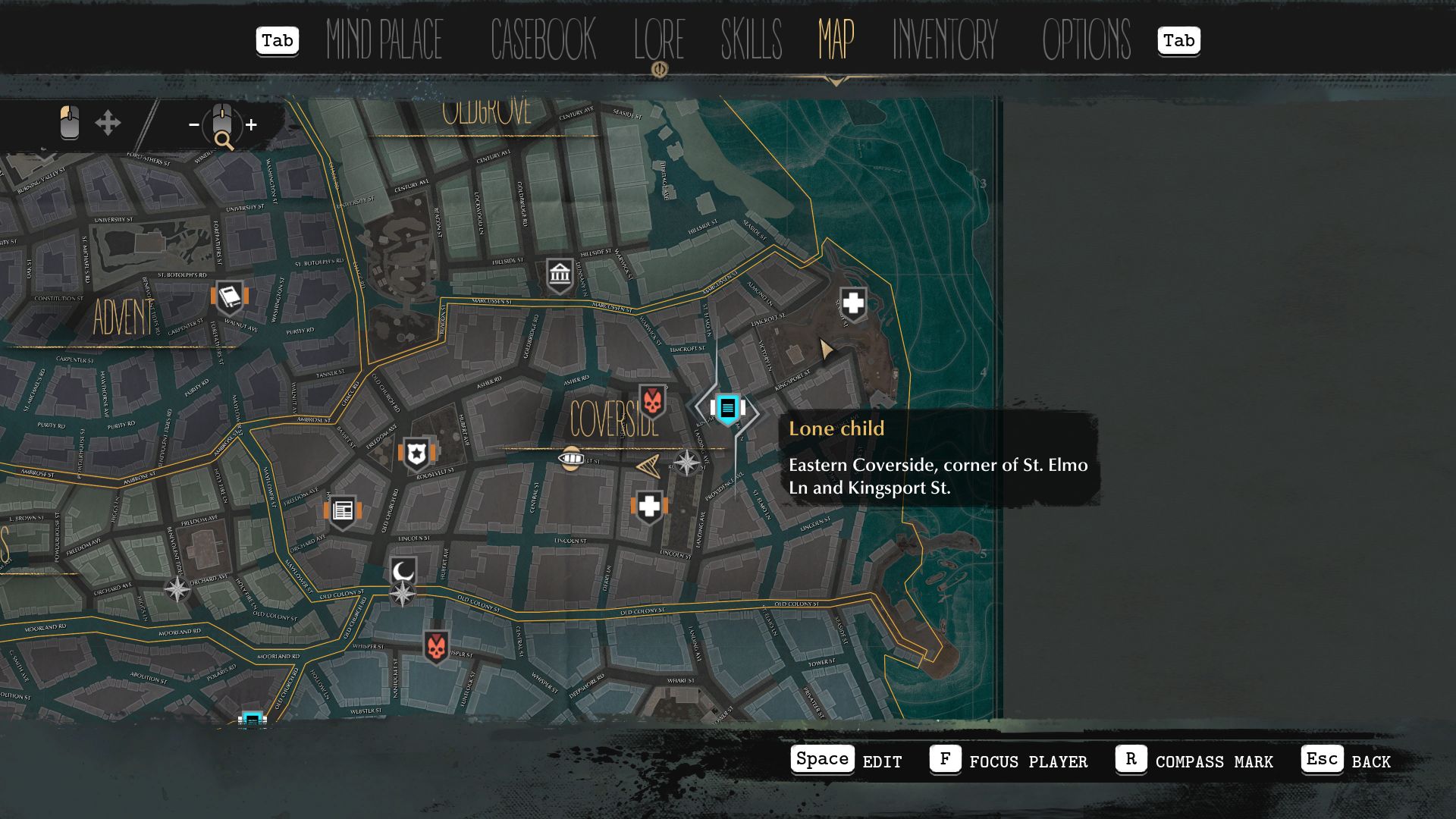 The Sinking City uses the same mind palace-y business as Frogwares’ popular Sherlock Holmes games: you investigate a scene to find evidence, combine bits of that evidence to come to conclusions, and use those conclusions to decide on the solution to your current case. Yes, there are some semi-annoying underwater set-pieces where you trudge around in a diving suit. Yes, Reed does have to do scavenging to craft consumables, a sticky balsamic glaze in service to a fillet of undercooked shooty-bang combat against supernatural fleshlump enemies. It isn’t good combat. But the detectoring is the draw.

If you don’t find all the evidence, or only find key bits of it, you won’t have all the possible solutions available. In practise, you won’t often miss evidence, and it’s not often that a smart deductive mind will serve you better than thoroughly searching every kitchen counter for a diary or a key. But that’s okay, because the Sherlock games never really asked you to think like Sherlock, and fitting all the bits together is still a nice jigsaw. There are a few good cases, hiding one or two possible answers unless you have the wherewithal to research something at the library. 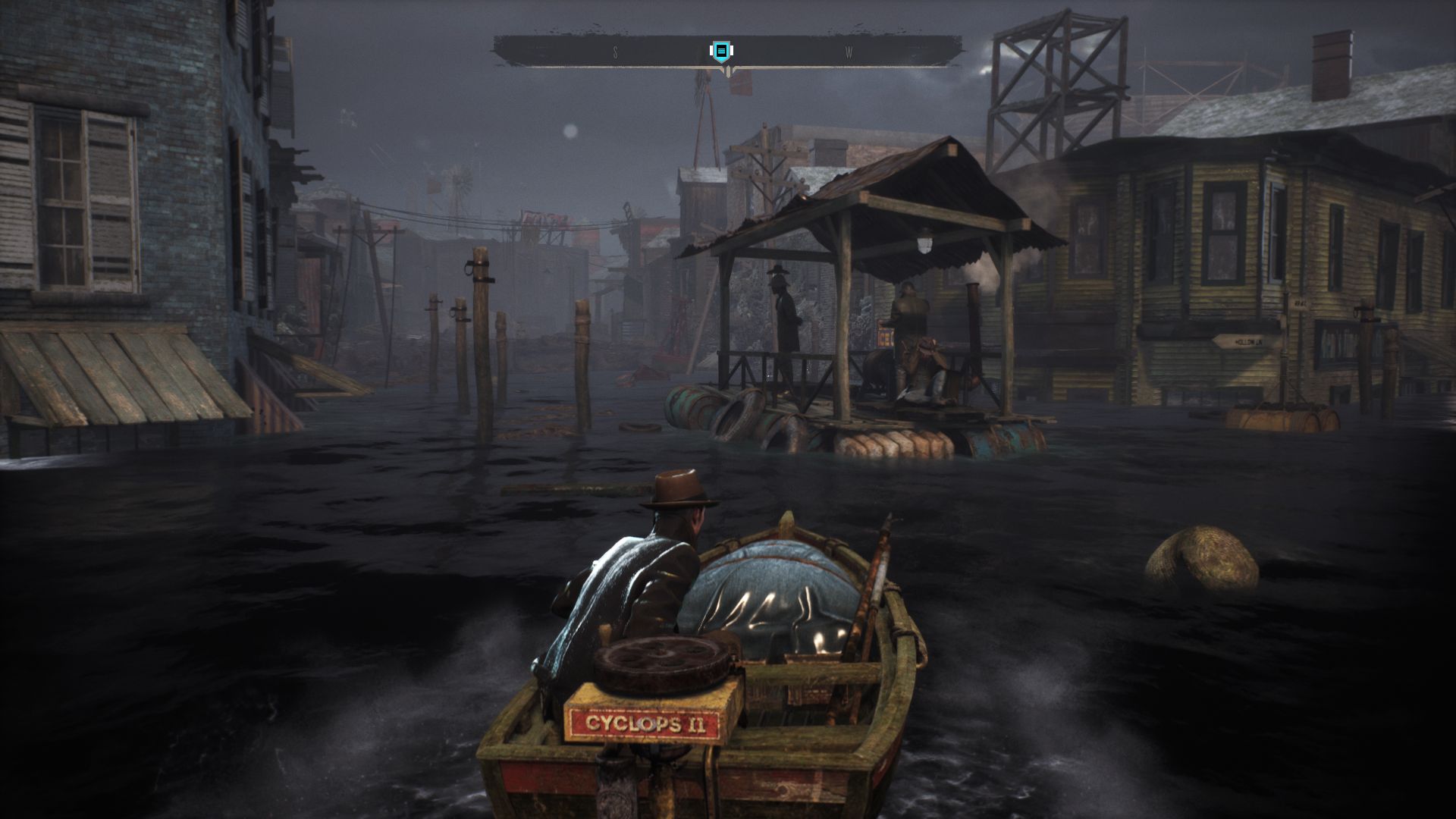 But one thing the last Sherlock game had was a right solution, as in: this person is or is not the murderer. In The Sinking City your choices have less weight because they come down to fuzzy morality. This person would be good for Oakmont, but is controlled by the cult. This person is an arsehole, but is not controlled by the cult. Who to choose? Up to you! But you don’t see a noticeable change in the city, and in any case the story has an inbuilt futility that makes all choice seem meaningless. And here we run into the Lovecraft of it all. And possibly some spoilers. Sorry.

Like The Call Of Cthulhu game, the thread that Reed is chasing leads to fish-monster gods, and the end of the world. Oakmont is part of a cycle that has been going on for centuries, having been built on top of a kind of chthonic sea-hell gate that, once a cycle, a chosen one must either close or open. Reed is so chosen, and he has fish-god magic. Solving crimes often involves him placing the events in order using special supernatural portal-o-vision, which I don’t think is admissible in court. There is a meter measuring his mental state, and if he sees too much weird stuff the screen goes all wibbly and he hallucinates monsters, or has visions of his own suicide. Cool! 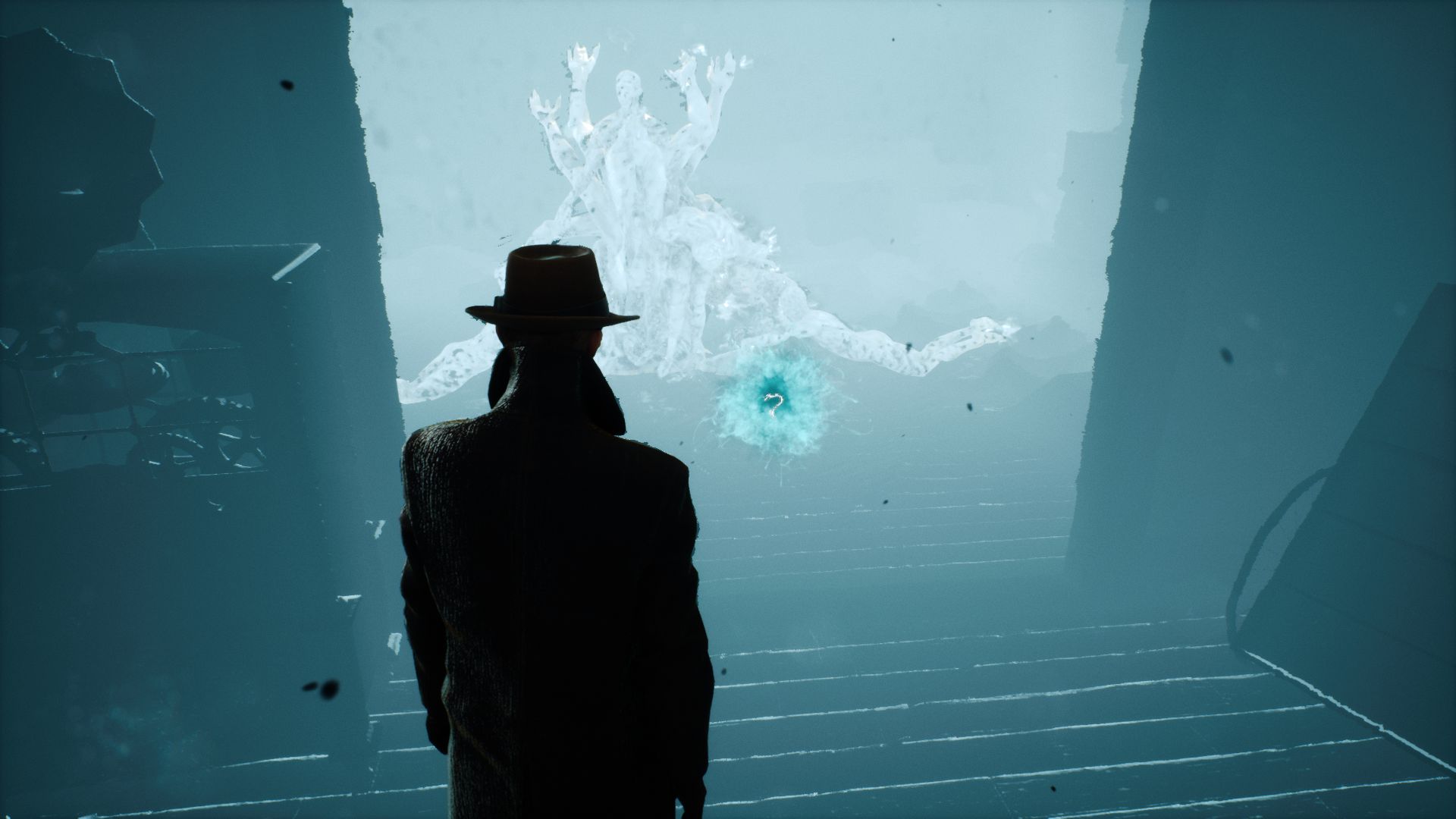 Thing is, if there’s one thing Lovecraft (who, I posited to Brendy a couple of weeks ago, would not be popular if his last name was something like Stinkboy) is known for, it’s his imaginative descriptions of some things being so cosmic and unknowable that it leads to gradual physical and mental breakdown. Oh! And racism. If there’re two things Lovecraft is known for…

I’m not going to debate that Lovecraft was a racist. He once described black people as “semi-human”. He was one of those lads who was so keen on white Anglo-Saxonness that he was mean about white people he didn’t think were white enough, like Irish Catholics (which is some fucking laugh). The Sinking City is evidently aware of this, because every time you load it you get this screen: 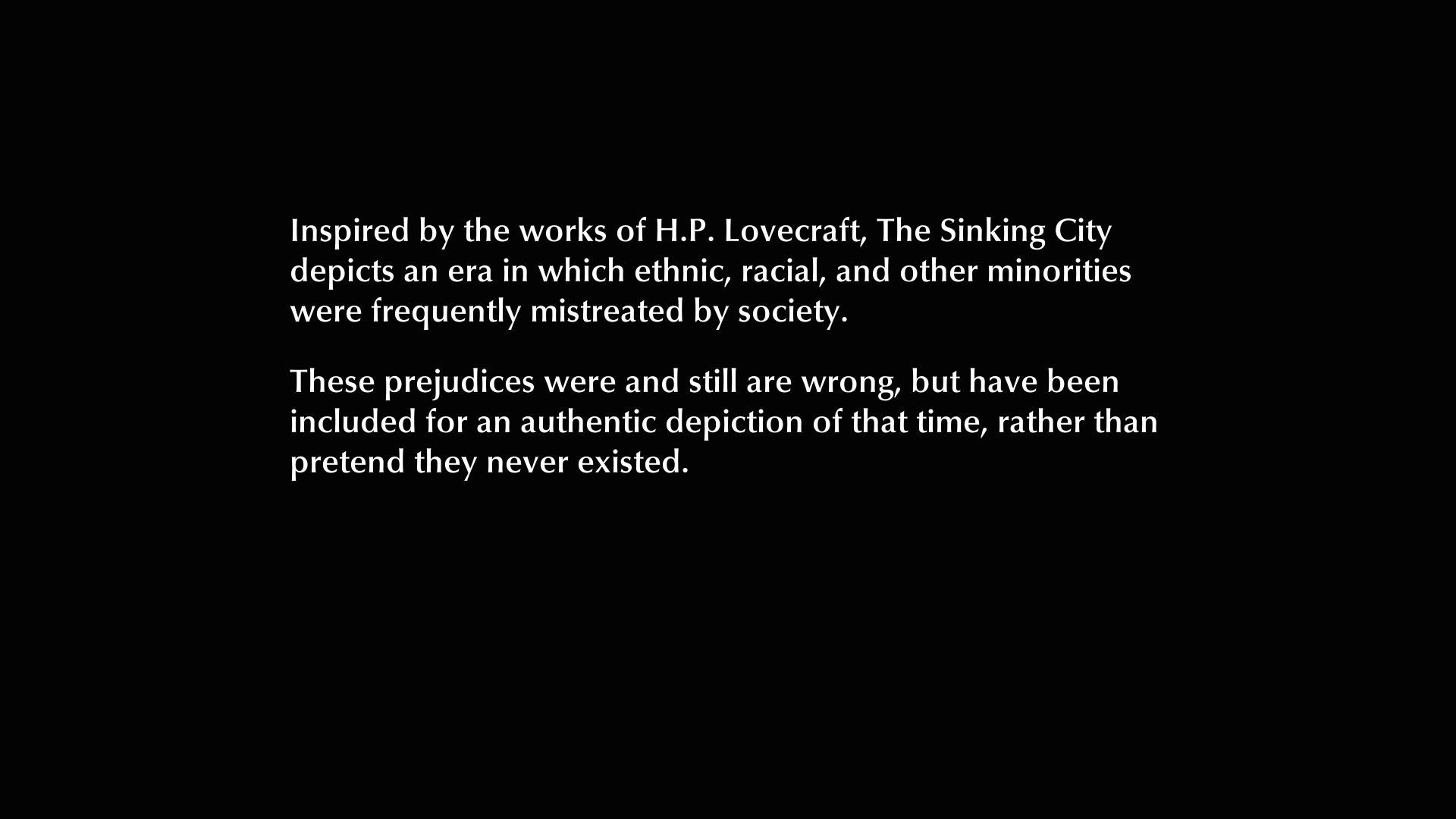 The Sinking City does include characters of different ethnicities, but you’re not going to hear any real life slurs. Rather, the game has adapted stories that are pretty explicitly inspired by Lovecraft’s own horror at miscengination. A significant part of the plot involves the Innsmouthers, from Lovecraft’s story The Shadow Over Innsmouth. In the game they’re immigrants and refugees from a neighbouring town who have flat noses, wide set, round eyes, and downturned mouths. Locals call them fishfaces, and do not like them. Some accuse the Innsmouthers of tainting their women.

One of the first people you meet is a man named Throgmorton, who looks like an ape. Like, he literally has a face with the same proportions of a literal ape. Later you find out that it’s because his literal dad went to Africa and literally had sex with a literal female gorilla. This seems to be inspired by the short story Facts Concerning The Late Arthur Jermyn And His Family, in which a man went to Africa, produced children with a “white ape of some unknown species, less hairy than any recorded variety, and infinitely nearer mankind” and thus fucked up his entire lineage from then onwards. Apparently Lovecraft’s skill as a writer did not extend to subtlety. 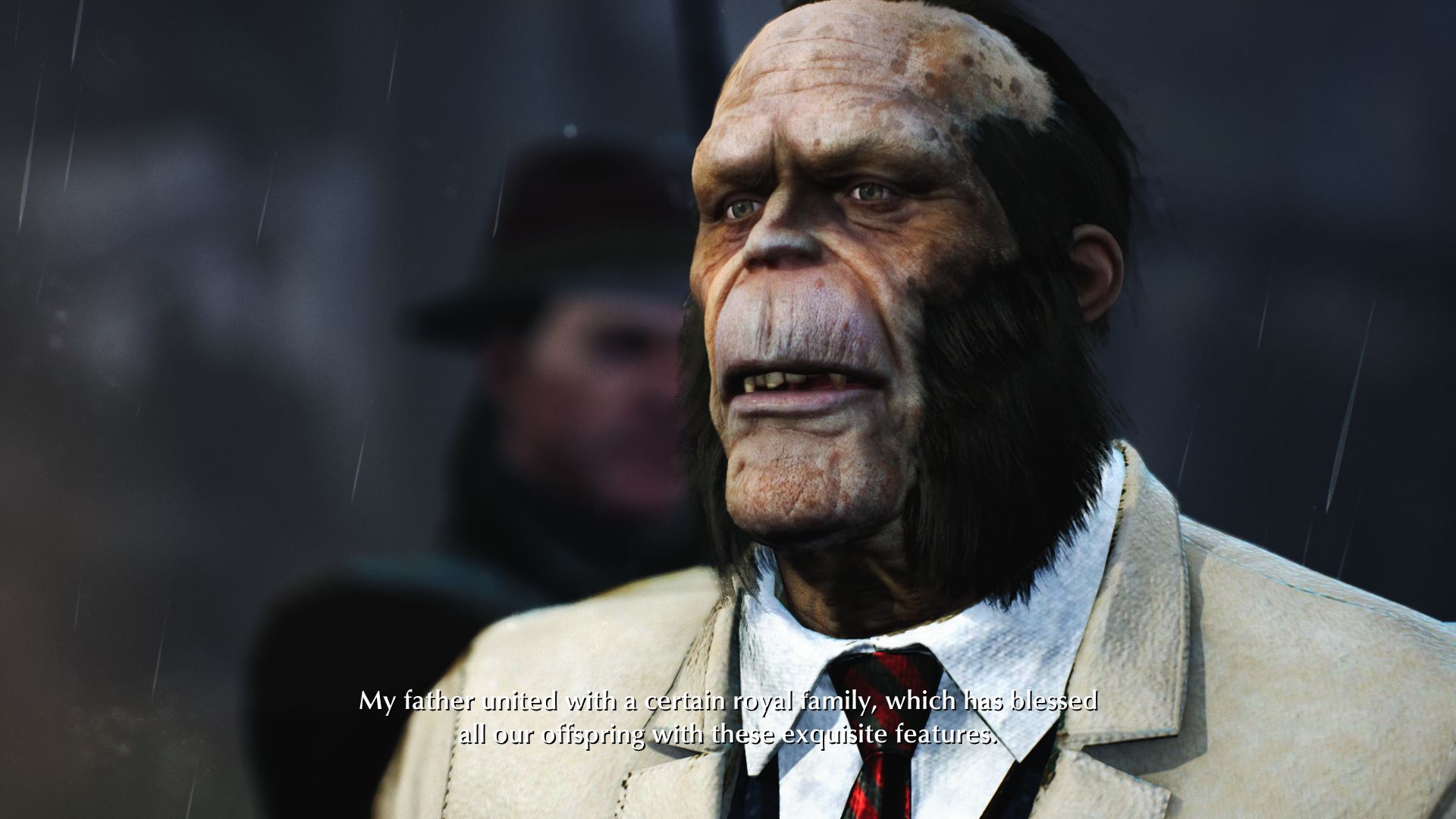 I don’t want to have a go at the very idea of adapting Lovecraft, but it seems weird that The Sinking City includes that disclaimer up top, and then doesn't critically engage with the stories it chooses to reproduce. That could have been really interesting! But as it turns out, the Innsmouthers mostly are involved in a sinister cult where they’re hastening the end times and all reproduce with the Old Ones, the fishy frog people from underwater. It’s why Innsmouthers look like fish. So… the metaphorical racists are correct in their prejudices...?

I get that it’s a grey area, but Lovecraft’s views were common at the time. His stories themselves aren’t an accurate depiction, unless people from New England are way weirder looking than I’ve been lead to believe. My feelings on this are complicated further by the fact that the KKK are in this game. The actual KKK, not an alternate universe KKK. Which is where “authentic depiction of that time” definitely comes in. Although I feel moved to point out that the KKK still exists now.

Their role is confined to just one main line case. They all hang out in a gentleman’s club in one bit of the city, but there they are, with real-world historical photos of the KKK on their walls. And even then you don’t see them being visibly racist towards other ethnicities, beyond having it out for the Innsmouthers too. I understand why you wouldn’t want to have a bunch of NPCs liberally flinging around slurs, but to avoid mentioning what the KKK really did seems like, if you’ll excuse me, whitewashing. I’m genuinely puzzled as to why they feature. Are they meant as a stand in for Lovecraft being a racist? Are they to confront the player by pointing out what all these metaphors actually mean?

Without the weird Lovecraftian bits, this is a slightly janky, slightly grindy detective game that does some interesting things in a very atmospheric depiction of a profoundly depressed town. Taking them into account, I don’t know! I was confused and uncharmed by the whole thing, but I still haven’t untangled my brainnoodles. At least I’ve told you how they got tangled. Goodness, I was very interested in The Sinking City. I really wanted to love it. But I’m afraid rain may have stopped play this time.