Occasionally, when I pause They Are Billions and zoom out on my tightly packed, grid-based steampunk settlement, I think about how the tiny families in the centre could have just as easily lived their entire lives without ever seeing a single zombie. There’s little in the way of a fixed story or characters in this survival strategy, either in its separate challenge maps or ambitious, flawed campaign. But there is a constant mood of melancholy, darkening the air like industrial smog; the uneasy feeling humanity died out a long time ago. As the saying goeth, you either watch your settlement get munched to bits by zombies, or you live long enough to continue colonising hell to extend the borders of a grim dystopia. Jolly good, then.

I need a suitably steampunk name to start my campaign, something reminiscent of the sort of outwardly doddering, bitterly seething black-hearted elitists that I imagine overseeing a neo-Victorian colonial hellscape. I’m in luck! There’s just enough letters for Jacob Rees Mogg. Every standard mission and survival map starts with a command centre, four bow-wielding, speedy hunters, and an SMG-toting soldier (in a campaign, you’ll need to unlock the soldier via the tech tree). These missions require reaching a certain population, or income threshold, or clearing the map of flaky shamblers. Survival maps give access to the full tech tree, and this mode yeets increasingly nasty tides of crusty limpers at the settlement until it either perishes or sees off the final wave. I see a lot of people calling it an RTS, but you can pause it and still build things, so it’s really just an ‘S’. I would also accept ‘extremely elaborate tower defence’. 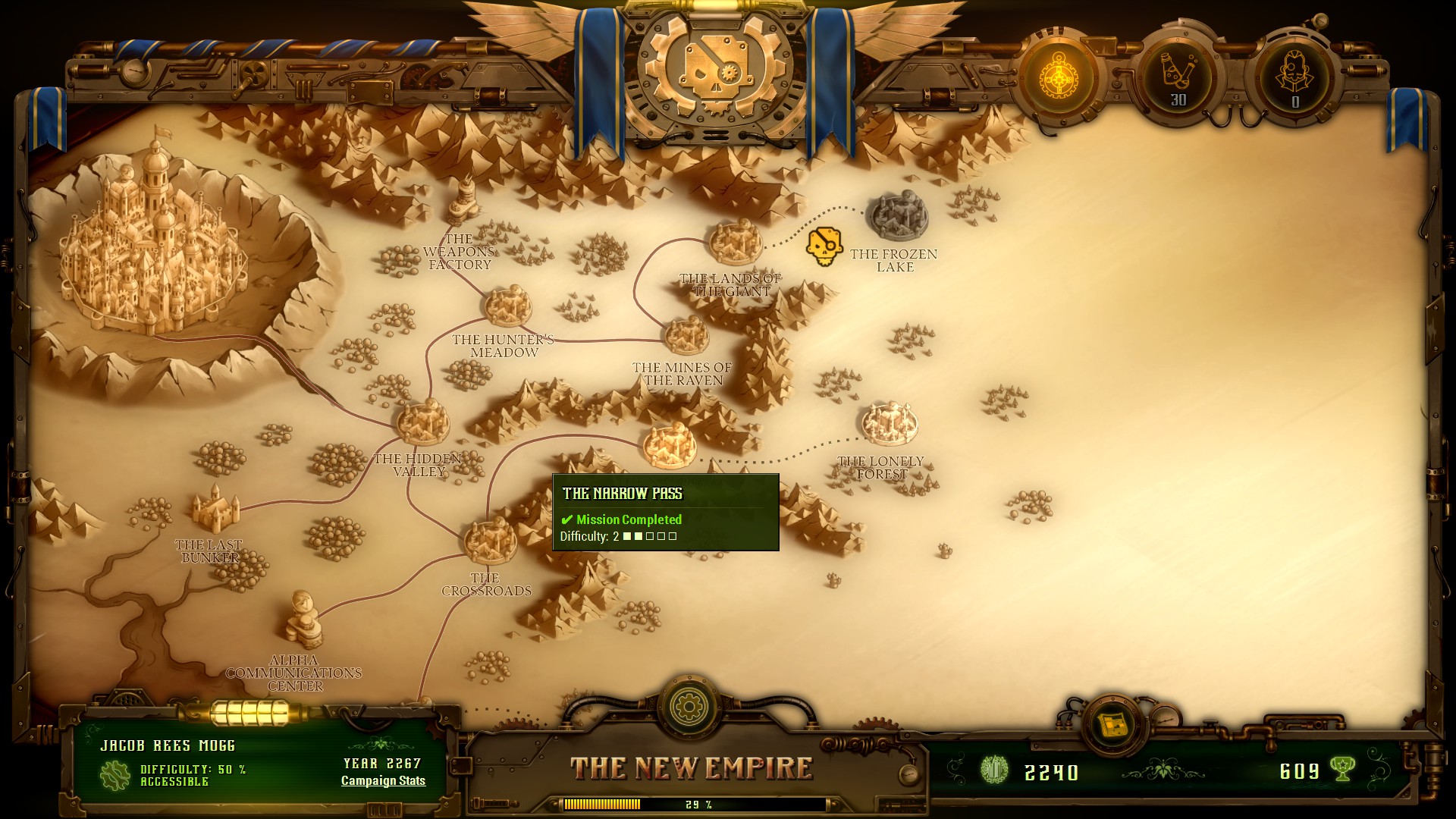 I start each mission the same way, sending each of my four hunters in a different direction. A soldier’s guns tend to attract bigger swarms than you can deal with at this early stage, but the hunter’s silent bows and speed make them perfect scouts. They edge along, picking off strays. Soon, the throng will grow too thick for them to take on alone, and that marks the borders of my starting territory. At this point, vigilance is my main concern. Once I start placing down houses and resource buildings, a single crumbly rambler is enough to kick off an undead buffet domino effect, with one zombie multiplying into two, four then entirely too many to deal with as more buildings fall.

This is urban planning as factory blueprints. There is always limited space, and buildings can only be constructed inside a power grid extended outwards from your command center by Tesla towers. There are certain restrictions on placement. Power generating mills need to be placed four tiles apart from each other. Sawmills placed next to forests gather wood but need workers to operate. Workers live in houses but need food from farms and fishing huts. Refineries gather stone to build bigger houses to house more workers to hire as soldiers. Expanding in one direction means sapping resources from another. 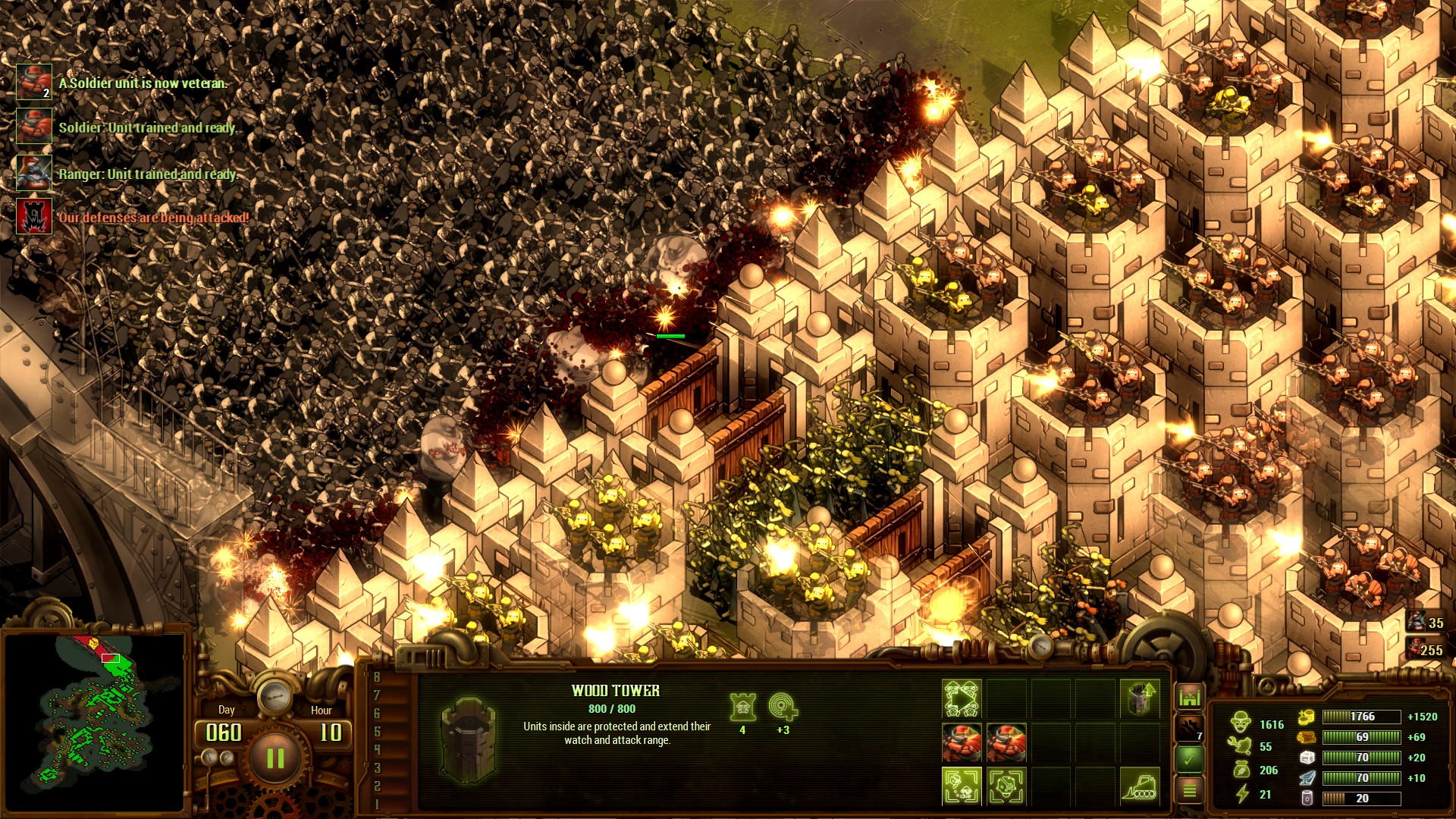 In terms of how this feels to play, it’s a dangerously compulsive plate spinner with increasingly sharp buzz saw blades that can and will lop your hands right off if you don’t spend enough time building up the defences on the outskirts of your colony. In terms of mood, It’s a tyranny of efficiency, less explicitly deliberate than Frostpunk but almost as oppressive. The people serve the colony and the colony serves the people like some horrific clockwork chicken and bronze egg situation. Farmers toil in the shadow of tall wooden palisades to feed the crew of gigantic ballistae and the pilots of flamethrower-wielding mechs. Steampunk Rees Mogg flattens his moustache and lubricates the gears of his pocket watch with orphan tears so he can check exactly what time the endless pile of ravenous walking corpses is due to descend on the walls.

There are two other types of missions in the campaign. An Infected Swarm mission offers you a set number of points to spend on an army and some barricades, then it chucks a load of tainted staggerers at you. Hero missions stick your chosen commando (you pick from one of two early on) in a facility where you fight your way to a shiny objective box, pick it up, then exit the way you came. These worked well in StarCraft because the characters were interesting enough to spend some quality time with, and there was enough unit variety to engineer tricksy scenarios that forced you to use your abilities. Neither of these things are true here. 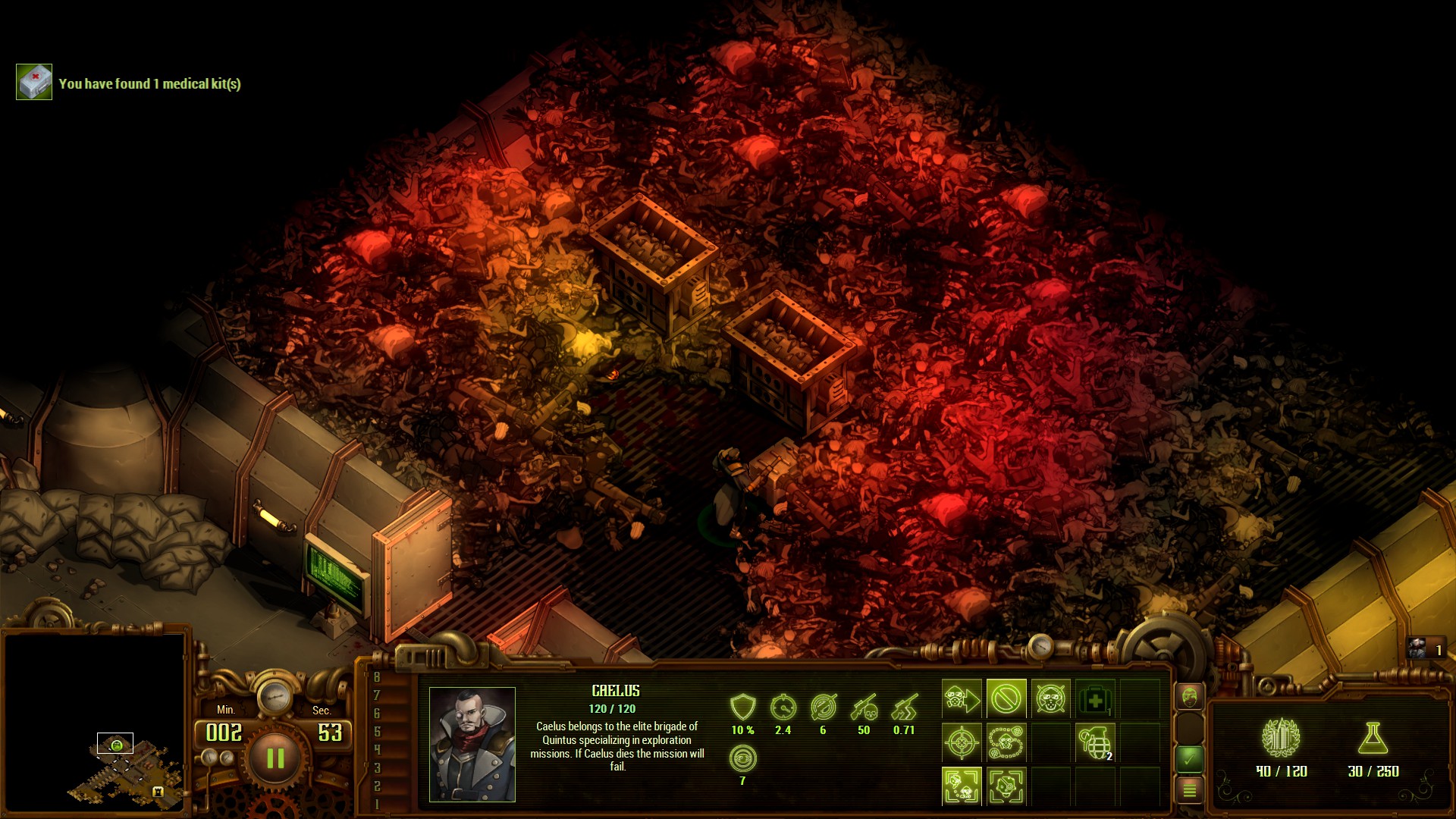 I’ve played about 28 hours, and the game tells me I’m 35% of the way through the campaign. Granted, I was rusty, and it probably won’t take everyone this long. I also knocked the difficulty down to easy after a while because I wanted to see as much as the campaign as possible, and also because I’m a coward. I’ve only seen a handful of the swarm missions, and just three of the hero missions, but at this point, it’s hard to say they add much except padding. The hero missions can get downright tedious, and the swarm missions seem very close to trial and error in how demanding they are in requiring specific approaches from the player. In both cases, I can’t see any reason I’d want to replay either of them.

I would have traded that easy mode out, absolutely accepted it not being there, if we were given the option to save just once or twice during the missions, which can sometimes take two and a half hours to finish. The choice not to allow manual saves in survival mode contributes so successfully to the atmosphere of dread and gives tactical decisions real heft. But spending hours on a campaign mission just to fall at a final wave is, to use my critical vocabulary to its fullest, a colossal ball ache. Especially when you're unable to predict the size of that final wave because each mission has different plans. 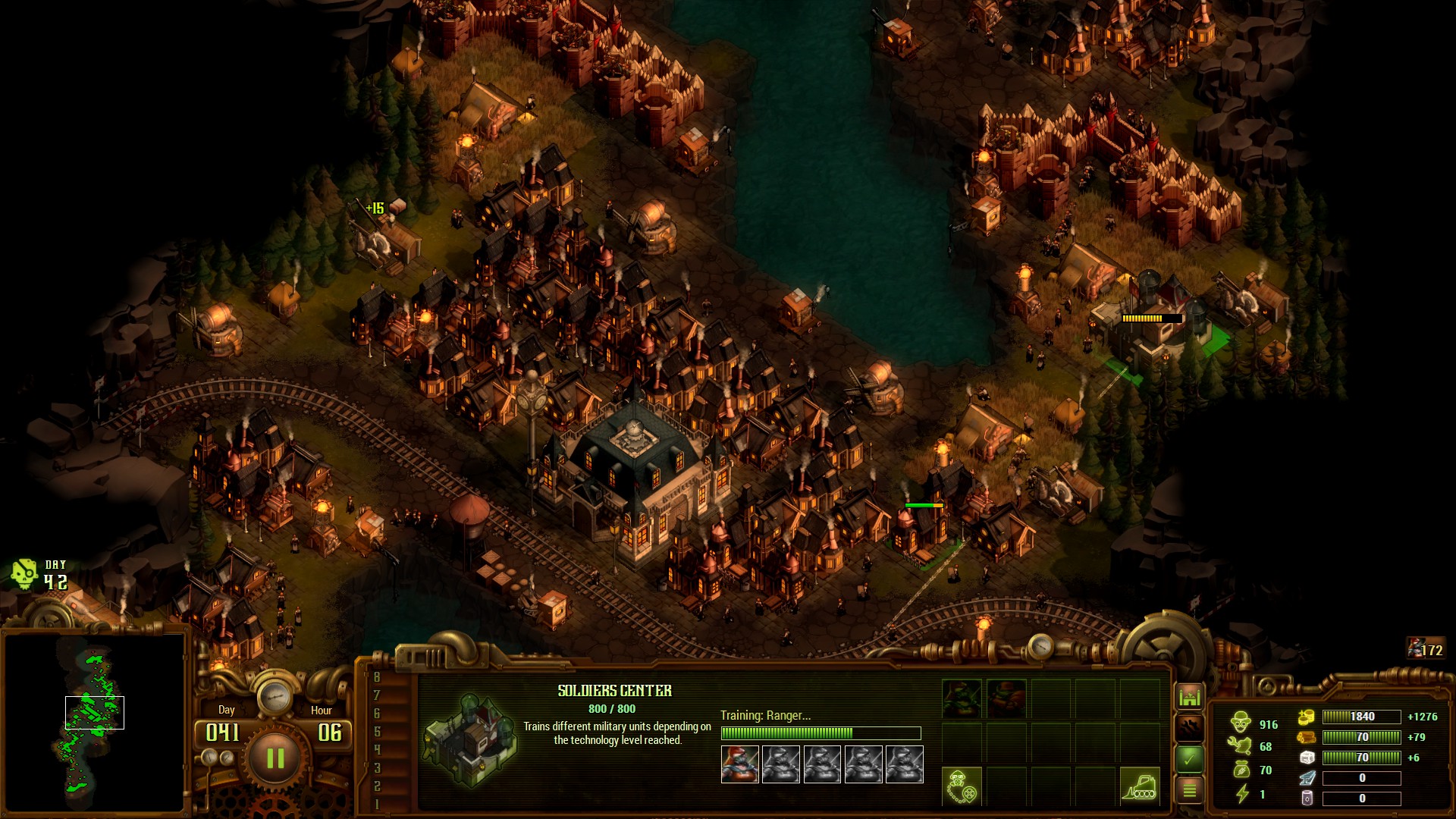 Plot twist. I’m going to give the game a Bestest Best sticker, and I’m going to explain why. Back in early, early access, when I imagined what a They Are Billions campaign mode would look like, it was easy to look at the quality of the survival mode and imagine something that would stand up against the great RTS campaigns. It was such a successful execution of concept that it made sense to assume that whatever Numantian turned their hands to next would match it. That isn’t the case, but it doesn’t mean that They Are Billions is a failure, just proof that, in retrospect, this was always a game that did one thing (and one thing only) exceptionally well.

But this is a verdict on the game as a whole, not solely a review of the campaign mode. A campaign mode that I appreciate for giving me the option to spend an extended amount of time experimenting with buildings and units and objectives and differently balanced maps without the full pressure of survival mode. That one thing that They Are Billions does so well is what PC gaming is all about to me. The base holdouts in StarCraft and Warcraft III are some of the best times I've had with a mouse in my hand, and Numantian have distilled the essence of those classic missions into a potent brew and worked alchemy with it.

The music is fantastic. The art is striking and its got that timeless comic book thing going on that means it's probably still going to look as good in five years as it does now. The campaign is a letdown, but that's partly because the survival built such a high perch to be let down from. If you're into strategy, I still think it's essential, and I can't really think of any better use than the sticky approval circle than that.