“Spearmen before archers,” I mutter to myself, as the Gamescom build for Creative Assembly's Total War: Three Kingdoms spins up. “Spearmen before archers.” In 20 years of playing Total War games set everywhere and when, from feudal Japan to medieval Europe, that magic mantra has never steered me wrong: it's the equivalent of “i before e except in c”, or “always hit the treasure chest before opening it” in Dark Souls. A Total War battle in which placing spearmen before archers doesn't at least get you through the opening five minutes is, probably, a sign that Armageddon is imminent. Will Three Kingdoms be the installment that breaks the chain and brings about the fall of civilisation?

Of course not. As the demo battle - a night-time skirmish in the mountains - begins, hundreds of uncouth sword dudes stream from a bamboo forest above the road where my army is innocently ambling along. I dutifully stretch out a welcome mat of the second century's finest polearms, slide my ranged units behind it, and watch with satisfaction as the ambushers are poked and pecked to a bloody standstill. Then I run a couple of cavalry units up the slope, and swing them round and down into the enemy's rear in the tactician's equivalent of a golf clap, scaring the other general off-map in the process. It's over in seconds, the carnage daubed lavender and orange by combusting trees and the flying lanterns that, in Three Kingdoms, stylishly telegraph the discovery of hidden units. But wait, what's that unholy trumpeting in the distance?

That trumpeting is the sound of reinforcements arriving, and unhelpfully, they are right between me and the map's (optional) exfiltration point – a new feature of ambush battles in Three Kingdoms. I hastily drag-select everybody and aim them at the middle of the map, where a bare hilltop confers a moderate defensive advantage. While my army is on the move I have a moment to reflect on some of the finer details here. Formations, for instance: my Protectors of Heaven infantry have access to Hollow Square, which sees them facing outward in all directions, making them (whisper it) unflankable. My Azure Dragons can separate like curdling milk into a line of spearmen backed by archers, Total War's golden rule of thumb replicated inside a unit.

It doesn't take my army long to trundle across the map because everybody runs by default – a perk of Romance mode, the more dramatic and less plausible of Three Kingdoms' two overarching campaign playstyles, where fatigue is less of an inconvenience and battles are proportionately snappier. (The other, if you're late to the party on this front, is Classic, which is based on exciting historical artefacts like crop tallies rather than the boring old feats of godlike valour depicted in the ancient Chinese epic, Romance of the Three Kingdoms). And then there are my heroes, Sun Ren and Sun Quan. This being Romance mode, they're effectively free-roaming superheroes rather than just overpaid people in loud hats who fight alongside your rank-and-file.

Sun Ren is a Vanguard, which means she's all about wrecking other heroes and molesting crowds: her two abilities are Heart Seeker, a high damage bow ability, and Flames of the Phoenix, an AOE blast. Sun Quan is a Commander, which means he's all about holding fast and juicing up your basic units: his two abilities are Stone Bulwark, which takes the sting out of incoming arrows, and Unyielding Earth, which makes nearby friendlies more resilient against charges and melee attacks.

Usefully, the two are blood relations, so if one of them dies the other will go bonkers with grief for three minutes, gaining huge stat increases. It's the shallow end of a fearsome depth of personality politics in Three Kingdoms, with your decisions between battles theoretically dictated as much by the traits, foibles, kinships and rivalries of celebrity characters as army size or the robustness of your economy.

Brendan has already gone over the broad strokes of all that, so let me dig into one of the knottier elements: spying. Where heroes in older Total Wars were essentially generated at random per faction, heroes in Three Kingdoms are drawn from a persistent recruitment pool that is shared by all factions. Each has a satisfaction level affected by how well you cater to their traits, which are partly or completely unknown to begin with: a hero who lives for the whiff of freshly shed blood probably won't be content with a management role in one of your backwater cities, for instance.

If their satisfaction drops too low heroes will cause disruption, quit or even rise against their lords, forcing you to kill or banish them (at the risk of annoying any other heroes they're on good terms with). Banish a hero, and he or she will return to the recruitment pool. You can also, however, pretend to banish heroes, casting them out with much over-compensatory ceremony in the hope that another faction will hire them, whereupon they'll serve as a double agent. 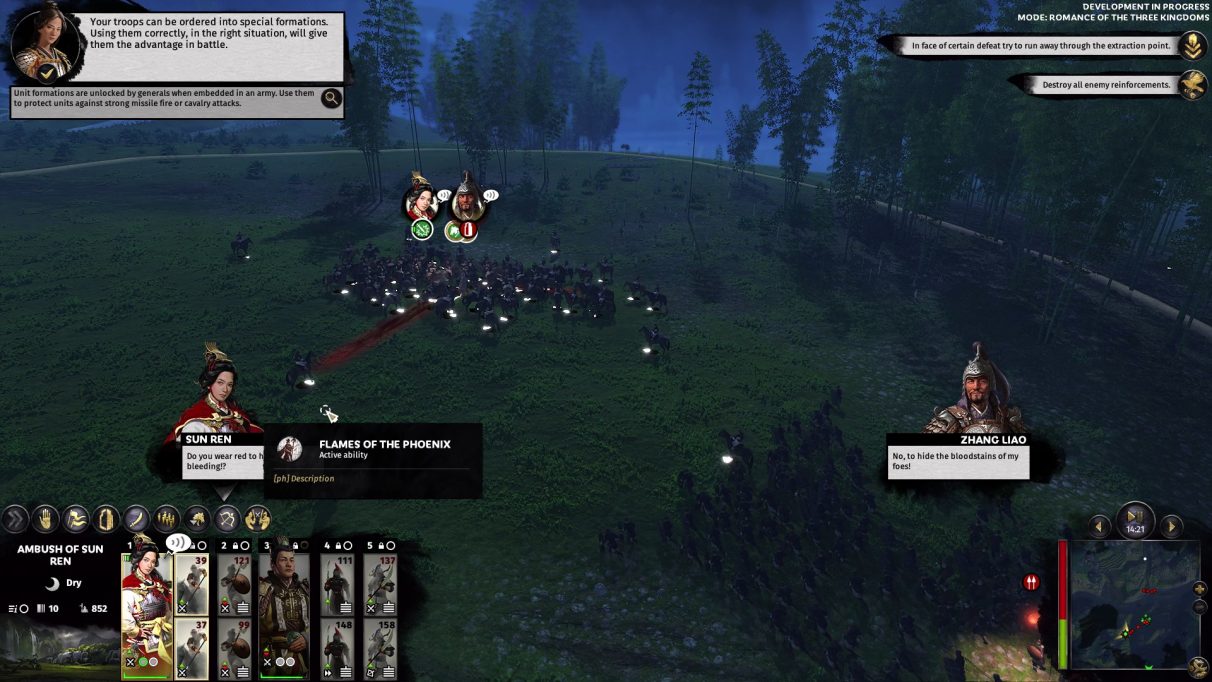 Once recruited by somebody else, these heroes will do all the things a loyal subject might do, including participating in attacks on the faction they're secretly in bed with. They also, however, let you see what enemy units on the campaign map are up to, and you can spend precious cover points - which accrue passively and otherwise act as protection against exposure - to trigger acts of sabotage.

These range from standard Total War cloak-and-dagger operations like sowing discontent in cities to slower, more consequential gambits worthy of The Usual Suspects. You might leave your agent be for hours, letting them gain levels and prestige, growing ever more central to your enemy's designs till, at long last, they're anointed heir to the entire faction. Then you arrange for the existing leader to accidentally swallow something sharp, and hey presto – you've conquered a third of the map in a single move. Give or take a civil war with any rivals to that faction's throne, anyway.

Grandmasterly reversals of this scope are sure to be rare, but the threat of them should invest the average Three Kingdoms endgame with refreshing paranoia. Especially, of course, in multiplayer, where the absence of an explicitly-labelled PvP mode may only serve to stoke tensions. “You've got two good friends playing together, and you know, why wouldn't you just put a spy in your friend's camp?” comments Al Bickham, Creative Assembly's development and communications manager. “Just in case. It may never come to anything.” Even if you don't turn on your ally, it might repay you to keep tabs on their movements. “Why is it that I always have an army ready to swoop in and take the settlement after you've beaten an enemy?” ponders Attila Mohacsi, senior game designer.

Back to the demo battle, where things aren't going too swimmingly. As I'm lining up my forces along the hilltop a second army emerges from the forests behind me. Perhaps making a stand isn't the best idea, after all. But how to reach the exit, with all those flashing spearpoints in the way? I experiment with another time-honoured Total War tactic - kiting the other side's infantry with my cavalry. It's super effective, but in the process, sparky old Sun Ren gets into a bout of trash-talking with an enemy hero, Zhang Liao. As far as martial repartee goes the writing is more or less up there with “where did you buy your clothes - the toilet store?” but it's incentive enough to initiate a duel, which sees both heroes dismounting for some motion-captured high jinks while basic troops maintain a respectful distance. 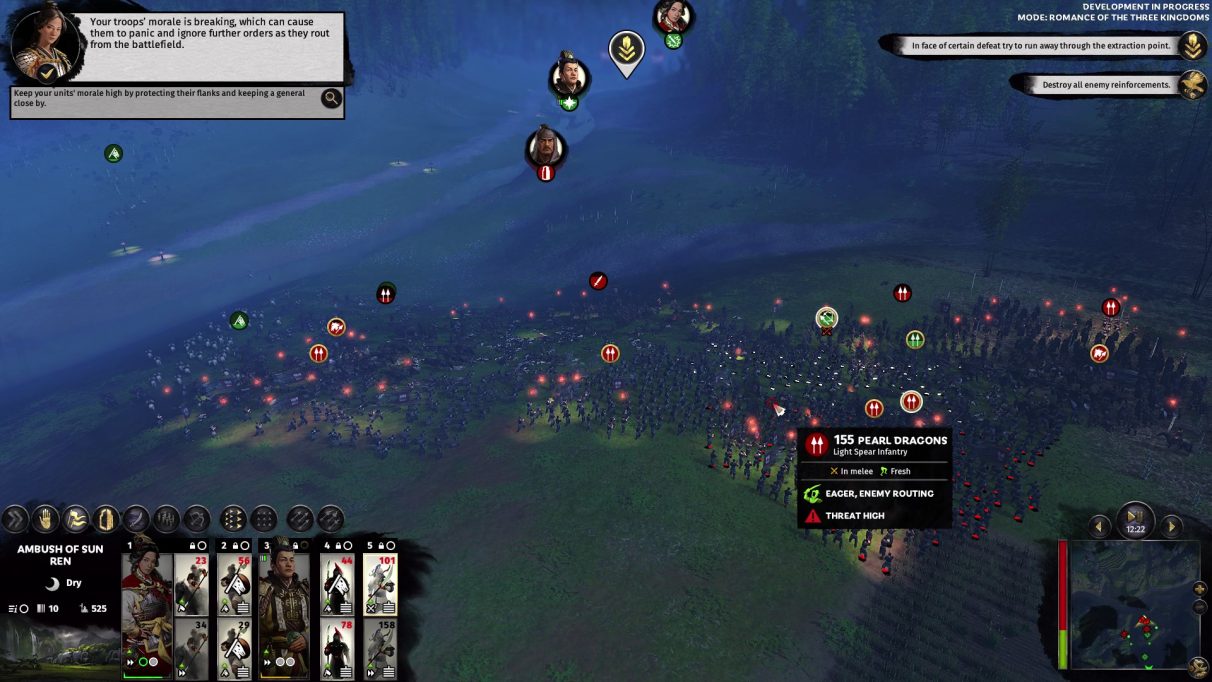 Winning or losing duels (which you're free to turn down) has an obvious effect on your army's morale. Beyond ensuring that your newbs aren't pitched against seasoned warriors, the trick to them is essentially spamming your character's abilities. Unfortunately for Sun Ren, I'm too busy sneaking everybody else down the valley to pay much attention, and after a few spirited moments she takes an axe to the lower intestine. Sun Quan accordingly flips his lid and starts kicking formations apart like sandcastles, which at least helps me power through the enemy line and get around a third of my army to safety.

There's a lot about Three Kingdoms that's familiar to the point of enervating - the importance of morale and positioning, the rock-paper-scissors relations between unit categories, the somewhat patchy battlefield AI which sees massed battalions haring off in pursuit of a single cavalry unit. The trouble – a perennial problem where this franchise is concerned – is that the more exotic elements aren't the kind of thing you can properly explore in an hour or so of play. Still, Creative Assembly has had a lot of success with weirder campaign dynamics in recent years, and while I doubt this iteration's flair for espionage will exceed dedicated intrigue 'em ups like Crusader Kings, the prospect of cat-and-mouse games within a persistent hero population sounds thrilling. After all, what use are spears and arrows against treachery?