They’re climbing the walls. Hundreds of tiny warriors are using grappling hooks to scale the stone barriers of a Chinese settlement, as I look down on the battlefield from my perch at E3. I bite my lip and pretend to know what I’m doing. Yes, swordsmen, through the breach. Spear dudes, down the middle. Grappling hook men, up you go. Only stinky Romans use anything as primitive as a ladder to assault a city. But oh no, I’ve forgotten my heroes. Three horsemen that are now hundreds of metres away from the action. These units are what Total War: Three Kingdoms is all about. Special warriors, similar to the powerful hero units of the Total War: Warhammer spin-offs. I send them in and they slaughter dozens of soldiers, holding entire battalions at bay. But the enemy has one of these heroes too – Lü Bu. And he LOVES to kill.

Three Kingdoms is the first “full fat” Total War game set in non-orc history since Total War: Attila (although what counts as "full fat" in Total War circles seems to be a lively debate). While fans of dusty military history might be pleased by this, it’s also clear from these hero units and other elements that developers at Creative Assembly have learned from their Warhammer days, despite this being made by a different internal team.

I was playing the Battle of Xiapi in spring 199 AD. At this time in Europe, Rome is reaching the height of its power, with Emperor Severus swanning about Iraq trying to bust down the walls of Hatra. But in China, all sorts of complicated shenanigans are occurring. The Han dynasty, China’s reputed “golden age”, is falling to bits and the country is splintering into the Three Kingdoms, the states of Wei, Shu and Wu. I can tell you all this because I’ve just learned it from Wikipedia. This lack of knowledge is one of the reasons Creative Assembly feel it’s right to set their next strategy game in third century China. It’s an under-explored period in videogames (unless you’re a Dynasty Warriors diehard) but a significant moment in world history. 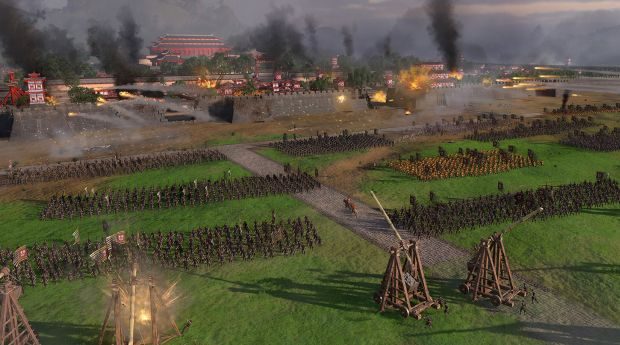 History, however, can only give you so much. Here, events of the campaign will also be lifted from The Romance of The Three Kingdoms, the 14th century Chinese novel that covers the same period. There’ll be two modes. A Classic mode will let you play through a more historically accurate version of events, while Romance mode will give you all the colour of the novel.

“What’s in the book matches what’s in the [history],” says Janos Gaspar, game director, after I play the demo. “But it has the texture that we usually don’t get as historians. It’s telling about emotions, it’s telling about relationships, behaviours, motivations. Not just of single people but for a wide cast.”

The studio used biographies for Napoleon in the same way, he says, to add colour to that era of history for Napoleon: Total War, and here the idea is similar. They want to use both sources: the historical record as told by boring old taxes, inheritance records and army reports, and the “larger than life” characters and sometimes-mythical events of the Romance. Since the novel has all the significance in East Asia as Robin Hood or King Arthur does in England, says Gaspar, leaving it entirely out “would be a shame”. Although they will still give you the option to play through the facts without embellishment. In the historical Classic mode, major characters will be embedded with their men, for example, lacking the superheroic specialties of their Romance counterparts. They will be “more mortal”.

But there’s also something a little Crusader Kings about the champions of this new campaign (in the Romance mode at least). Or to hear Creative Assembly talk about them, it seems that way.

“We do have the concept of ‘persistence of character’ in the Romance mode,” says Simon Mann, senior designer.

In other words, characters will die in battle, but they will also be captured, wounded, hired, released and develop in other ways. The studio wanted to bring the concept of Guanxi, an Eastern philosophy of social standing and personal networking, to the sieges and skirmishes of this installment, says Mann.

“The characters build their relationships with one another as you play through your campaign, so people form friendships, rivalries, bonds. And this is based on their personality types, the actions that both the player and the AI do on the campaign map and in battle.”

Gaspar expands on that. When you’re recruiting, for example, you’ll have to keep a character’s family connections in mind. Not just their battle-stats.

“Characters have a relationship network,” he says. “They have property, you could almost say they have feelings, and you have to reason with that. When you’re recruiting a character you no longer just look through the stats and think: ‘Yeah he brings this trait and that’s good because later on he will be a better warrior.’ But also: ‘Hm, maybe I will pick this guy. He’s not great but he has good friends.' And that might be very useful later on...”

But their temperament also matters. Gaspar gives the example of a ‘charitable’ person who might not get on with an ally who is ‘greedy’. This in particular is very Crusader Kings II, and a little different from the personality quirks of, say, Total War: Warhammer, where traits have more practical effects. A ‘lazy’ trait in those games, for instance, simply limits your movement range on the campaign map.

But in Three Kingdoms, traits might have a knock-on effect in terms of diplomacy, to the point where one character might leave the faction of another, fed up with their greedy ways, among other problems. Close ties will also be important in the heat of a skirmish. If there are two brothers in the same battle, says Gaspar, and one of them dies, that’ll have an effect on the surviving bro. He may lose morale, or he might go berserk. If there are two rivals fighting for the same side, they’ll both fight harder, trying to “outperform” the other.

On top of this, the result of a battle may also affect how one character sees another on the campaign map, and if that brother does die to an opportunistic spear between the ribs, there will be “mourning period” where the morale and attitudes of his family members and friends are affected.

“Even maybe for years afterwards,” says Mann, “you might be feeling the hurt from an event like this. So now you don’t have to treat these characters as pawns, they’re humans with real ideas and depth of character you have to manage and control.”

All of this sounds interesting. A romantic war filled with drama in a setting that isn’t immediately familiar (at least to folks with big blind spots in their world history, like me). However, it remains to be seen how much depth all those relationship-twisting mechanics will have. And even if this interpretation of Guanxi has depth beyond a few intentional personality clashes, we don't yet know how clear it'll all be to the player. Even when moving my troops around on the map, I was reminded how much effort it takes to truly know a Total War game.

In the short demo, I didn’t get a lot of time to bring myself up to date with a series I haven’t played in earnest since Medieval II. So it was hard for me to tell exactly how much has changed after such a long absence, and how much I need to re-learn. But it still feels like a game that offers more to those excited by small historical details – the weapons used by certain units, the effects of fire arrows on certain troops, the effectiveness of certain fortifications, and so on. Hovering my mouse over the units, I could see there were a lot of stats to read, a lot of details to learn about tiny men. And that means, for a Total War amateur, it still felt like a game of geometry and slow positioning. Of basic flanking and having greater numbers. Although I did notice the AI reacting to my advances by pulling back its troops to strategic points, rather than simply routing or throwing its swordsmen into the grinder.

The fights between heroes aim to bring a little more to the map than triangles of horses poking rectangles of archers. While my soldiers fought two long and farcical skirmishes in separate parts of the city, I sent one of my important horsemen to challenge the enemy’s hero – Lü Bu. But this enemy general is a beast of a fighter. Did you know he killed his own dad? It’s true; he’s a dad-killer. He quickly stabs his way out of trouble, causing my bloodied hero to flee the entire battlefield in fear. I also could have broken this duel off early, but it would have resulted in a drop in morale for the surrounding troops. 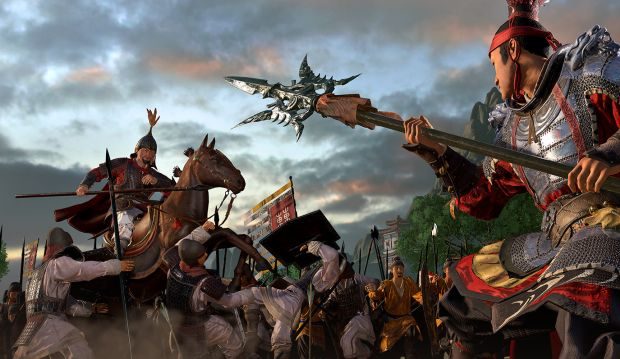 Mann suggests I use another hero, a general who is more specialised at going head to head with fellow warriors. I click on Lü Bu once more and my hero heads straight for him, ignoring all the other clashes around him. They fight, and I see the menu for my hero. Each special character will have abilities to use during these dramatic scraps. One of my hero’s abilities – Blinding Fury - does a massive chunk of damage in one hit. I use it to deliver the fatal blow to the enemy commander. The battle is over. Lü Bu is dead.

I mean, I knew this was going to happen because the demo blessed me with a ridiculous amount of troops, and it was introduced as “Lü Bu’s last stand”. But still, victory feels good. I didn’t get to see the campaign screen, or how this win would affect the map of China, not to mention the invisible network of relationships lying underneath it all. And I suspect that side of things (among other details too small for my feeble brain to pick up during a tired E3 day) will be the real measure of worth for fans of Totes War. But by learning from their Warhammer outings, and (it seems) from Crusader Kings II’s familial feuding, this trip to the east has gained some promising features.

Total War: Three Kingdoms is due out in Spring 2019. Check out our E3 2018 tag for more announcements, trailers, news, and goodness knows what else.