Total War: Warhammer is a big game, and the recently released Total War: Warhammer II [official site] is even bigger. But in the eyes of the Creative Assembly, that still isn't big enough. To remedy this, they've come up with the Mortal Empires DLC, a free download that will essentially merge the two games' campaigns together in one huge map, letting players assume command of any of the eight races available in the series so far.

To find out why this is happening and how the Creative Assembly are going about it, we spoke to Game Director Ian Roxburgh and Lead Designer Jim Whitson.

RPS: My first question is: why do this? Why did you decide to take the two games you've made, smash them together as one huge game, and then release it for free?

Ian: Well, very very early on when we first decided to do the deal with Games Workshop, and you look at the massive, massive amount of content there is in the Warhammer Fantasy IP, we knew that we ultimately wanted to do all of it, and make a game with all of it in. But that's just far too vast a task to do in one game, there's just so much there, that we thought the only way we could ever achieve that ultimately is by breaking it down into a trilogy, make three full-sized games just ram-packed with content themselves, and then as a free offering for our fans, we can merge them all together and put them all together and create what we ultimately want and what we believe our fans would ultimately want, which is this massive, Warhammer universe, but with everything in it. 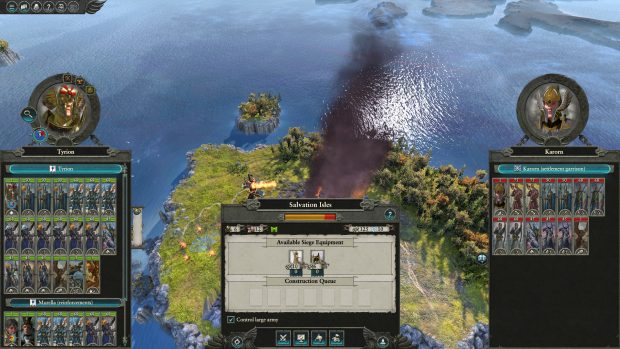 RPS: Is the idea to combine it all again after releasing a third game in the series?

Ian: Yeah. So what will happen is when we release Warhammer 3 eventually, we will actually combine all three games into a bigger map from all three games. So this is like a halfway stage if you like, where we are taking the first two and combining them into the biggest map we've ever done. Then by the time we've finished 3 we'll do the same after that as well so and again that will be free to our fans.

RPS: Why did you decide to release the Mortal Empires campaign now rather than when the third game came out?

Ian: In a nutshell, because we could.

Ian: Because whatever way you look at it, this game, the Mortal Empires campaign now, is a magnificent, huge game in its own right, it's by far and away the biggest and most content-rich campaign map we've ever done, and so there's no reason to wait until the end of the third, because we've already got two games plus DLC's worth of content in a free campaign, and we wanted to be able to give that to our fans to play and enjoy sooner rather than later. There's no reason not to do that if you can and we have the desire to do it, because our fans get the benefit of playing the Mortal Empires campaign sooner than they otherwise would. 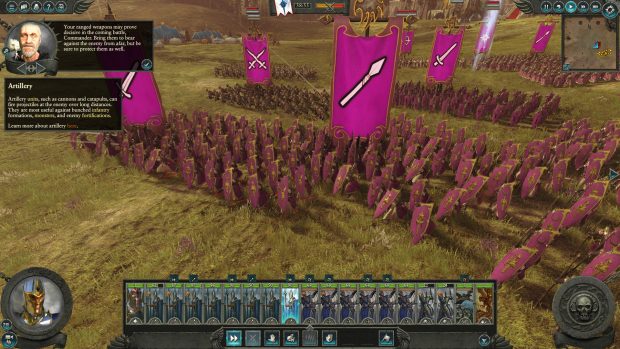 RPS: Were you ever concerned that releasing it in this manner would lead people to believe that these were two halves of a game that were originally intended to be one?

Ian: We've tried our best to make it clear, because I think people who have played Total War: Warhammer II will realise that's a massive game in its own right. It's huge, I mean it was a massive undertaking for us to do, and you know, and the Mortal Empires campaign is something on top of that as well. So I don't think anyone would feel like we've sold them short on what Warhammer II was.

The idea is that actually they're just getting even more really cool stuff, thousands of hours of gameplay in the Mortal Empires campaign for free, and that is really about the policy from the beginning with this trilogy, [which] was to be able to give loads of stuff free as we go along, as we refine and evolve the game through DLC. Yes there has to be some paid DLC obviously to generate the revenue to be able to make the future games.

But at the same time, we're giving away a load free, so everyone can get the benefit of it, and feel that we're giving something back. And like we said that's hugely gratifying for us as developers and hopefully it's really gratifying for our fans as well. Because they get the benefit of the game getting continually better and better and better for free, even once they've bought the first game. So that was the plan. 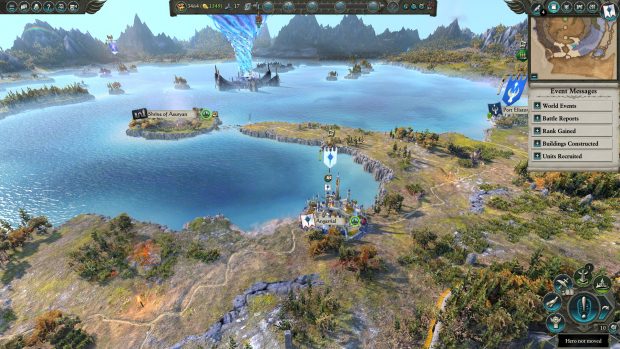 RPS: How exactly does the combined campaign work? I've played both games and they're quite different in terms of the victory conditions and how the different races function. So how are you merging those two campaigns together in terms of how they play?

Jim: In terms of the victory conditions we're not going with the Vortex narrative on this one. It's more focussing on the sandbox aspect of Total War, which was still there in Total War: Warhammer II, but obviously because of the huge breadth and depth of content we've got by mashing the two games together, that in itself provides a constantly changing gameplay experience.

So each of the races has got individual victory conditions that are tailored to the flavour of that race which again keys back into the lore, and amongst those victory conditions there are ones that will encourage the player not to turtle in their starting area but to go out and experience the world so they go out into contact with all those many many races there. I mean in turn one of the campaign there's something like 117 factions present on the map. 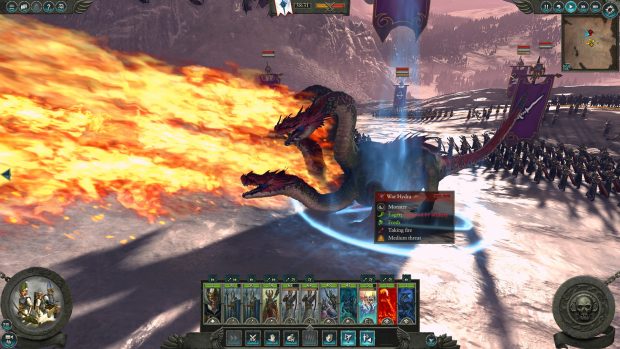 RPS: One of the things I recall from the first Total War: Warhammer is that the races were quite different in terms of who they could ally with and where they could place settlements. With this Mortal Empires campaign seems to be more focussed on conquest. How are you going to facilitate that through the game systems?

Jim: Well, we haven't got the mechanic we had in Warhammer 1 where, for instance, Dwarves could only capture territory off of Greenskins. We've included the mechanic we had in Total War: Warhammer II with climates and universal territory capture, so you can legitimately go over to Ulthwan as Karl Franz and actually capture territory over there. It's not necessarily always going to work out for you particularly well because there's a place that's got a climate that doesn't really suit your race then you're going to make slower progress there. But that's all part of the strategic thinking.

We've got much more sea hexes as well. That adds a whole new dynamic and the AI's been beefed up to handle intercontinental invasions across seas. So you can't just capture an entire continent and then sit there with it lightly defended. You're gonna get the AI turning up on your shore and attacking you. So all of those things are new, strategic things that players need to be thinking about, and that keeps it fresh. At the same time we've still got Diplomacy. That's all perfectly legitimate. It's a sandbox game, we don't lock of diplomatic options particualrly between factions. So if you want to as Karl Franz make an alliance with the Vampire Counts, if you work hard at that and make the right moves that's perfectly possible.

Ian: I've just been doing that in my campaign [laughs].

Jim: So it's all about providing players with that toolbox of toys and features to you know, go about things in the way that they want to. 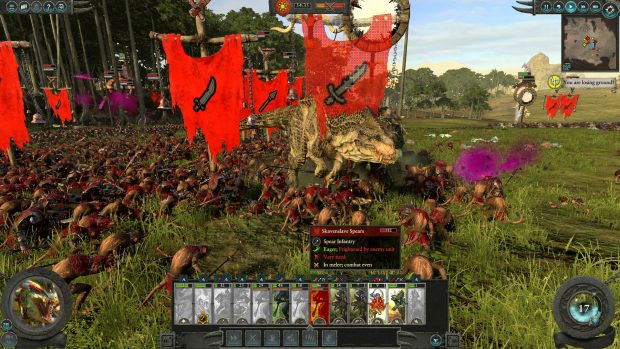 RPS: How have you merged the two maps? What changes have you needed to make in order to make the setting as a whole functional?

Ian: Well first and foremost, the gameplay and the design is the priority in this. So we did look long and hard about how we'd go about doing it, and very early on came to the conclusion that just a simple adding of both maps together wasn't going to be the right gameplay choice. Because even in the Vortex campaign, if you've played that you'll realise there's four separate continents and you'll spend a lot of the game just building up on one of those continents in relative isolation. If you just bolt that onto another massive map on the other side of the world, again it would be so long before you broke out of that and actually engaged with others.

So largely from that point of view, and also the more technical restrictions or considerations, like for example, the end-turn times. There's so many new factions in this new game, and the end turn goes through all these factions. We don't want you to be waiting much longer than previously for each end turn.

So what we've done is we've reduced the actual scales and size of the map for the New World part of the map, but it's still as rich in content, it's still got loads and loads of regions to capture. But it's not as vast as the Vortex map was itself if you follow me. So it's designed to bring the Lizardmen and the High Elves into a bigger world more in terms of gameplay and to keep the whole thing under control. But the whole map is still way bigger than anything we've done and it's cram-packed full of everything. All the DLC we've done, for one. And there's 35 starting position, so you can play 35 different campaigns and when you consider how massive an investment a time each individual one of those is.

Jim: Yeah it's about bringing this scale, but without allowing the gameplay to become baggy in any way. It has to remain tight.

Ian: That was far more succinctly put than my waffle. 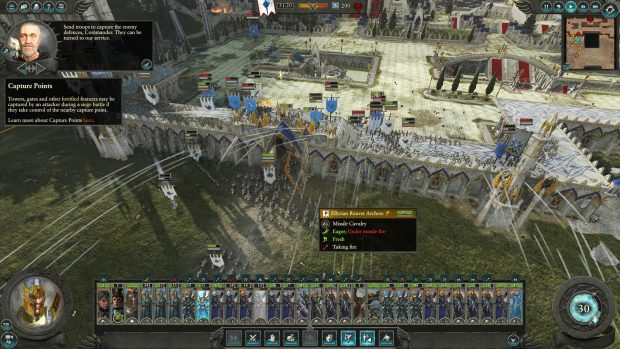 RPS: Alongside the map, you've got all the different races squaring off, and all playable. So when you were thinking ahead to the Mortal Empries campaign, did you need to make a plan so they would be balanced equally?

Ian: We knew full well from the beginning for each individual game and for the Mortal Empires campaign that balancing was going to be a big issue, because one of the fundamental design tenets of the whole trilogy is this asymmetry of races. And so balancing was always gonna be a tougher task than it was before, and let's face it balancing a game the size of Total War is always a tough task.

So very early on as part of this plan, because we knew what we were going to be doing, we built in new systems and put aside the time needed to be able to properly test the balancing. So we have put a lot more time than we would have in previous products into that whole balancing and new systems in order to do that, and of course we use a lot of internal feedback and feedback from our fans in pre and post-release as well. We'll always keep refining and evolving and responding to feedback and tidying up the edges where fans report that something might be a bit OP here and there.

Mortal Empires is due to launch on October 26th and is free to owners of Warhammer 1 and 2.