I can sympathise, at least a little, with the ancient Egyptian-themed undead known as the Tomb Kings, and who are Total War: Warhammer 2’s newest faction. A decade ago, I was trapped underneath the Great Pyramid of Giza for a mere 20 minutes while another tourist had a claustrophobia-induced panic attack. Waking up inside a pyramid and discovering that your innards are full of embalming fluid and you have only rags to hide your desiccated shame would, I imagine, be a little bit more unpleasant. No wonder they want to murder all the living.

With a chip on their bony shoulders and an appetite for power and conquest, the Tomb Kings are comfortable fit for Total War, even more so than their multitude of warlike adversaries. They’re an unceasing military machine that has yet to discover a problem that it can’t fling an infinite number of disposable animated corpses at, over and over again. This new faction is, however, something of an acquired taste, with some uneven integration into the campaign - but nonetheless the Tomb Kings are a surprisingly forgiving starting point for newcomers.

Leading the Tomb Kings, you get to be ultra-aggressive right from the get-go, and to take a lot more risks than the Total Warhammer norm. With their ranks filled by devoted undead and magical constructs, there’s no cost to recruiting troops. They’re literally raised from the dead. Sometimes even in the middle of a battle. And since corpses don’t, so far as we know, eat or drink, there’s no upkeep cost, either.

There’s no reason, then, to not field as many full armies as there are Lords. Not tying armies to the economy means that low funds don’t suddenly halt the game, and it frees up cash for expansion.

The result is a rapid early game, with plentiful opportunities to swallow up settlements. Pyrrhic victories are common, but as armies can be replenished quickly and for free, they're not nearly as bitter as they are with living factions. That ability to recover from defeats or costly victories also makes learning to play the new faction a simpler task. You can make a lot of mistakes and still muddle your way through. 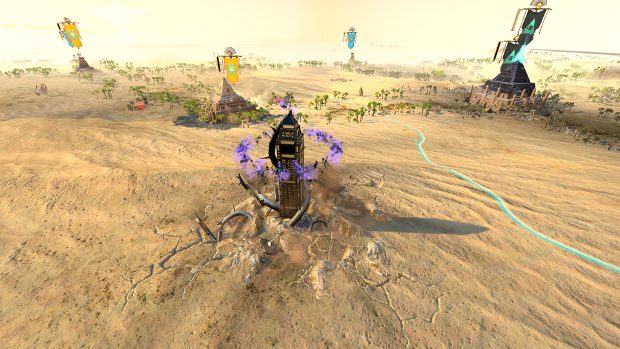 There are still some limits to recruitment, of course. Armies need Lords; there are only a few ways to raise the Lord cap, and the majority of units are limited by the number of recruitment buildings. If you want to field more than two units of top tier infantry, for instance, you’ll need to construct the recruitment building in another settlement. The money saved from unit upkeep, however, more than pays for the extra construction costs. This also ties army size and diversity directly to conquest, giving you another reason to push your borders out and start up some more lovely, lovely wars.

All of the Total War faction fundamentals are present, but few haven't been altered to fit the Tomb Kings’ style and personality. As a once great empire, this legion of mummies are obsessed with reclaiming their lost glory.

So as well as a pool of random Lords, there are special noteworthy kings with history and fancy traits who can be dug up and put to work. And the research tree isn’t about making new discoveries - instead it's focused on uncovering old knowledge, raising Lords and unlocking more hero slots by spending gold and canopic jars, the faction’s primary resource.

The TWW research tree is so often filled with stat changes - and there are still plenty of those in the Tomb Kings tree - that don't feel like tangible, meaningful improvements, but here it's a way to get your hands on powerful, unique units and pester your foes with a multitude of agents. 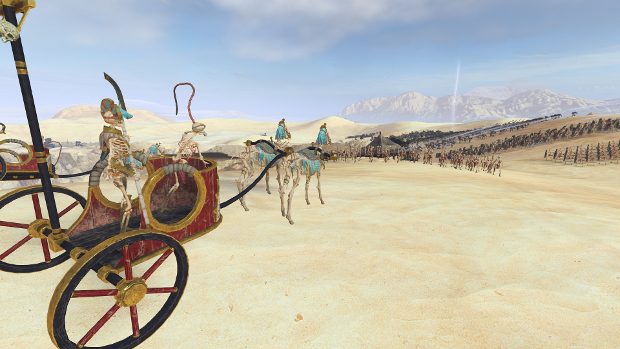 The faction’s lore even informs how magical items are discovered. While other factions typically grow their inventory of powerful artefacts by fighting, questing and exploration, the Tomb Kings are far too snooty to rely on random weapons pilfered from a dank cave (or enemy corpse).

Their boffins in the Mortuary Cult can craft everything from mystical spears and armour to enchanted items and talismans. They're crafted from canopic jars and trade resources, finally giving things like iron and marble a purpose outside of the threadbare trade system. Through the cult, tough Legions of Legend (essentially Regiments of Renown) can also be unlocked, and the Lord cap can be increased, enabling you to field more armies. It's a welcome twist to a system that's normally random.

See, gaining items the normal way - which the Tomb Kings can still do, but to a lesser degree - means that you’re at the mercy of RNG. You might end up with a guff amulet that nobody needs, or a sword you’ve already collected four times already. The sheer number of items means that you’ll inevitably find plenty of cool pieces of gear, but there’s no way to plan for them. Playing as the Tomb Kings, you’ll be actively working towards specific weapons listed in the Mortuary Cult, already knowing which Lords they’ll compliment best. As a system, it’s no less involved than the original - but it gives players more agency. 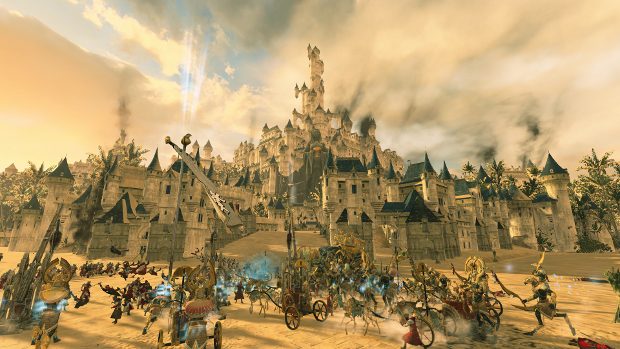 In terms of the bigger picture, the Tomb Kings have been flung into Warhammer 2’s Vortex Campaign, but instead of joining the High Elves, Dark Elves, Lizardmen and Skaven in their race to control the Vortex, this race of shambling corpses has its own unique objective. They need to find five of the nine Books of Nagash, sacred texts written by their progenitor, and which can be used to activate the Black Pyramid - thus solidifying their power. On paper, giving DLC factions their own objectives to work towards should be a plus, as it spares repetition and encourages different playstyles. Unfortunately, in practice the result is a faction that doesn’t quite fit in.

The Vortex forces the main factions to engage each other, forging alliances to halt the progress of others or starting up wars to ensure that nobody gets to enact a ritual. Essentially, it inspires total war. There’s little of that in the hunt for the Books of Nagash. The nine tomes are spread out all across the globe, held either in cities that need to be occupied or by (usually neutral) Lords you'll need to defeated.

But by reducing the number of books that need to be collected to five, it’s possible to snatch the majority of them from just one continent, while only going to war with minor factions. As such, the Tomb Kings can feel like they're playing an entirely different campaign to everyone else, somewhat removed from the real action. 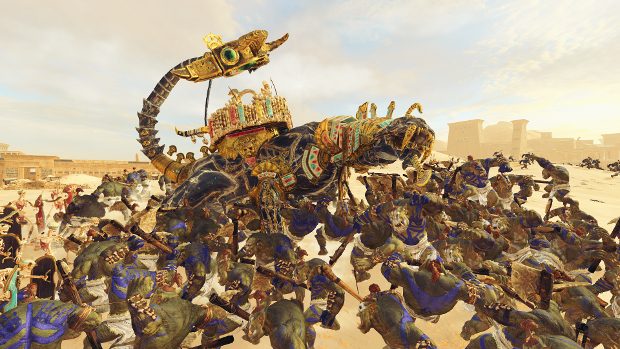 Of course, this being Total War, you can declare war on anyone, regardless of the objective. So while I didn’t really need to embark on an evil crusade across the sea to beat the snot out of some dinosaurs, it certainly spiced my game up. I just wish the main quest inspired this sort of thing more - it’s one of the major draws of the Vortex campaign after all.

The silver lining is that the Tomb King's four Legendary Lords are spread out across multiple continents. The default Legendary Lord is Settra the Imperishable, ruling from Khemri, the heart of the Tomb Kings' old empire. He gets a chariot with flaming wheels, a pet Warsphinx right from the get-go, and probably the easiest starting position.

Across the ocean are the exiled Grand Hierophant Khatep, embroiled in battling the Dark Elves with his massive Hierotitan, and High Queen Khalida, the snake and archer-obsessed vampire hunter. Each has vastly different obstacles and enemies with big grudges, but ultimately the main quest remains the same. 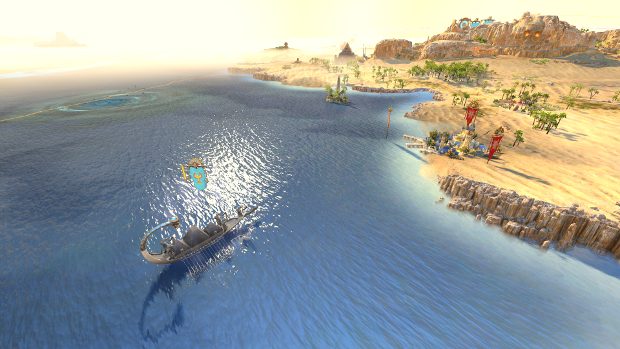 For the fourth Legendary Lord, Creative Assembly indulge in a little cross-pollination. Arkhan the Black, Nagash fanboy, is best buds with TWW's other undead faction, enabling him to recruit some of the Vampire Count units and not take a public order hit from vampiric corruption.

He’s the unpopular kid, with the other Tomb Kings not liking the cut of his jib, but his different roster gives him an edge when he eventually butts heads with them. He’s the first Legendary Lord able to recruit from two different factions, and the two undead races are remarkably complementary.

The addition of Fell bats means you don’t need to rely on the only other flying units, for instance, while the Hexwraiths are quick assassins adept at picking off stragglers and attacking from cover. They’re joined by Direwolves, who are great at harassing enemies and chasing down pesky archers, and poisonous Crypt Ghouls, for when you want to make sure your enemies feel like crap before they die. 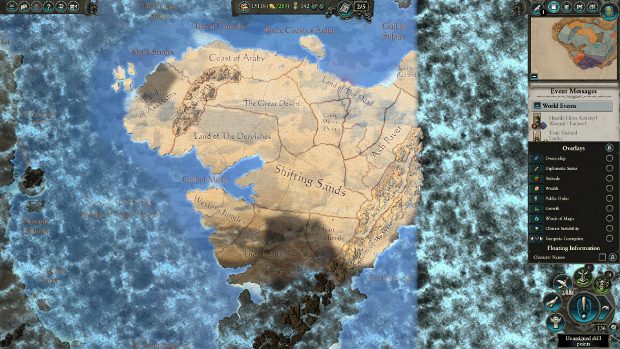 The other Tomb Kings have a broad roster of units - including archers, unlike the Vampire Counts and their few ranged options. Infantry and cavalry dominate the list, however, with skull-headed monsters, all manner of skeletons and an absurd variety of chariots making up the numbers. The lower-tier infantry can struggle in one-on-one fights, but since they're undead, they never rout, giving them exceptional staying power. They're great at locking down enemies until some chariots can smash into their rear.

The largest units, as is so often the case in Warhammer, are the real treats. Huge, deceptively fast Warsphinxes can charge into enemy units and instantly send them packing, while the colossal Hierotitan is equally handy at stomping on things and spell-casting. They're both connected to specific heroes, too. Animated constructs can be restored mid-battle by Necrotects, and Liche Priests get a buff when they're hanging out with a Hierototan. 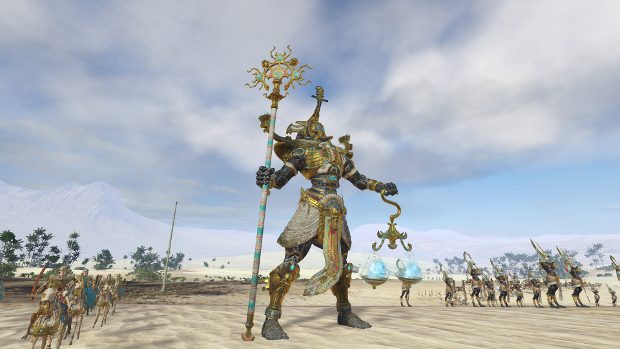 There's an undead version of the Warsphinx, of course, and a giant scorpion replete with an armour-piercing stinger. They’re an exotic bunch who specialise in inflicting fear and terror, while never succumbing themselves.

The undead are an acquired taste, though, and not only because of all that rotting flesh. If you’ve played the Vampire Counts, you’ll know how you feel about the lack of a morale system already. Playing as either vamps or mummies, I appreciate not having to worry about them getting the jitters and legging it, but they can be a bit of a pain in the arse as opponents, with battles sometimes devolving into a game of chasing the enemy Lord around. Though the Kings won't rout, they're still affected by low leadership, so take out the enemy Lord and it’s easier to make their units crumble and break. 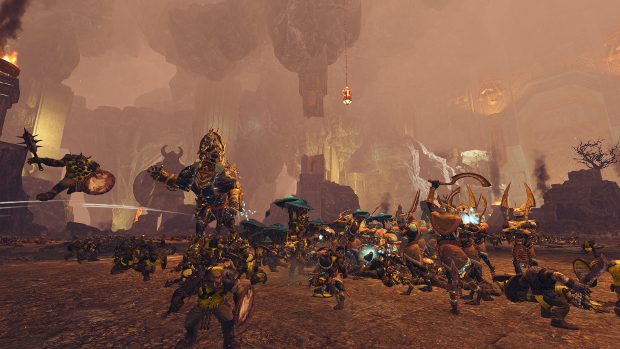 It’s the Wood Elves rather than the Vampire Counts who feel like the Tomb Kings’ closest relative, however. Their playstyles are very different, but they both foster Warhammer’s growing asymmetry. Their approach to everything from research to gear shakes things up in ways that pay off more often than not.

The Tomb Kings are ultimately a great addition to Warhammer’s perpetually pissed-off factions, but their poor integration into the Vortex campaign suggests that Creative Assembly haven't quite figured out how to add factions who don't share the core participants' objectives. Consider this, then, a slightly more emphatic recommendation if you’ve got access to the Mortal Empires sandbox, where everyone is competing in the same race to conquer the world.