Turtle Beach struck gold with their mid-range Atlas Three, and now it's the turn of their top-end PC headset, the Elite Atlas - and you know it's the big expensive one because it says things like 'pro performance' and 'designed with leading esports teams' on the front of the box. Indeed, at a princely £85 / $100, the Elite Atlas is one of the more costly gaming headsets I've looked at in some time. But is this esports-ified headset really worth stumping up the extra cash for? Here's wot I think.

For starters, you can definitely see where the extra money's gone over the Atlas Three here. Instead of a simple plastic shell with quite budget-looking padding, the Elite Atlas comes with a very Steelseries Arctis 7-esque metal and suspended padded headband, as well as larger, comfier ear cups with a classy-looking reflective finish. Made from memory foam, leather and something Turtle Beach calls 'athletic fabric' that feels a bit like stretchy running gear, this definitely looks the part of a high-end gaming headset.

Or at least it does when you first get it out of the box, because after a couple of weeks on my desk it looked a teensy bit scruffy. Dust had settled in the rubbery joints between the inner and outer ear cup, which was incredibly difficult to remove and clean due to it sticking like glue to the surface, and the reflective sides were littered with fingerprints, small scuff marks, and bits of cat hair. Fortunately, the reflective bit is actually a magnetic plate, so you can always swap them out for something a bit different if you fancy switching up the look of your headset further down the line, but I was still disappointed they even got to this point in the first place, especially when replacement speaker plates cost another twenty quid a pop. 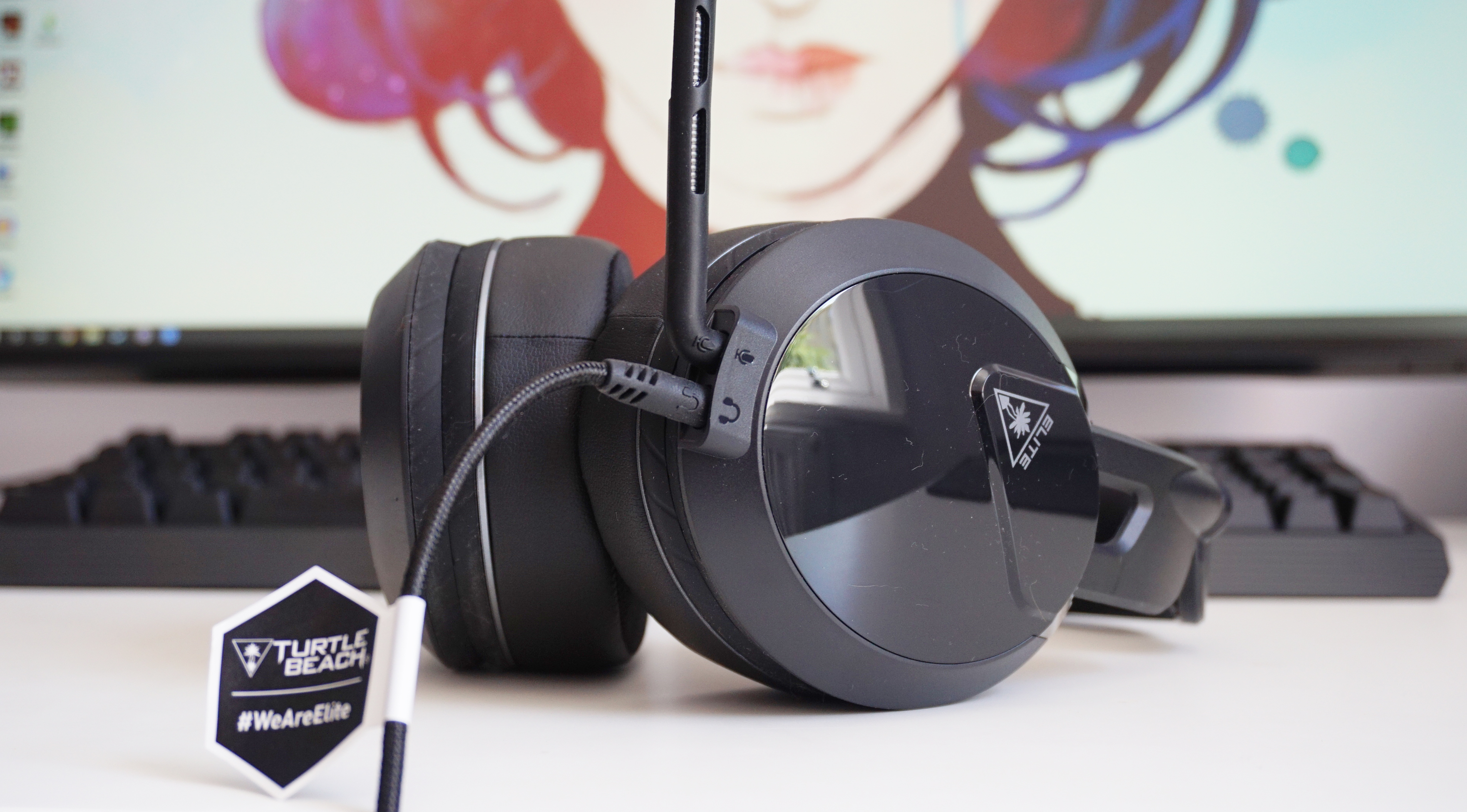 The Elite Atlas is very comfortable, though, and I didn't really experience much head pinching during the course of my testing. The headband isn't quite as flexible as the Arctis 7, all told, as it only has three, fixed stages of adjustment, but I found the middle setting to be just fine. This should hopefully give it plenty of leeway for those with even smaller heads than mine, as well as those with slightly larger heads, and it definitely feels like a more balanced bit of design compared to Turtle Beach's massively oversized Elite Pro.

The audio quality was also pretty swish, producing an immersive and thunderous soundscape in Doom that really let me get swept up in its fast-paced action. To an extent at least. While the howling Martian winds and industrial soundtrack felt very open and atmospheric, each blast of the Super Shotgun felt weirdly empty and hollow. It still had a sense of heft to it, but that deep, guttural approximation of the word PHWOAR was completely missing, which left it feeling a bit limp and deflated. 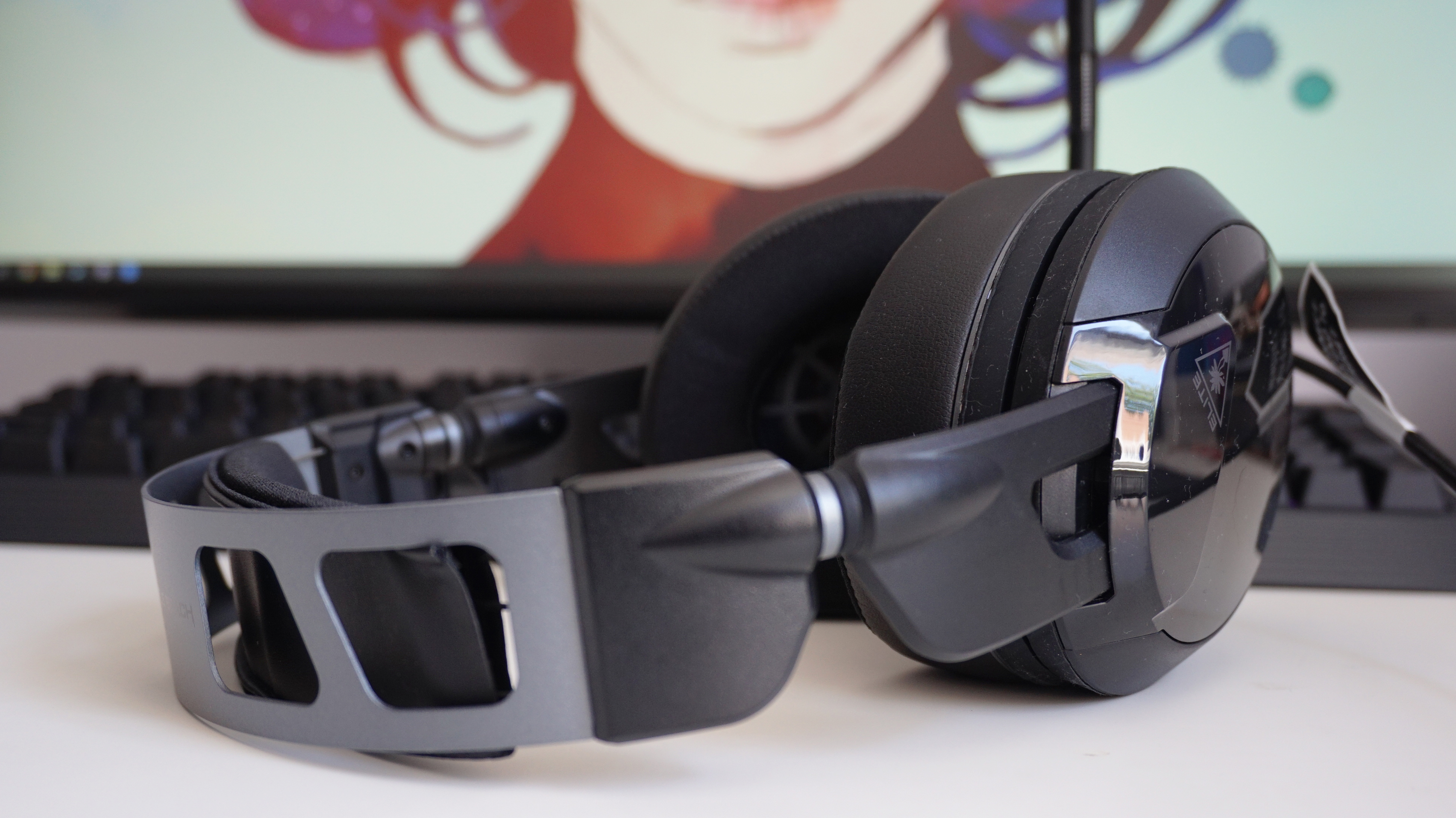 I felt the same way about the accompanying directional sounds, such as imps lobbing fireballs over my head and plasma fire coming from the other side of the map. As much as I could tell where it was all coming from, the sounds were a tad muffled compared to other headsets I've used in the past, and I suspect it's probably because the rest of the soundtrack was overpowering them a bit.

It's something I noticed in Final Fantasy XV as well, although here it was the opposite effect. While the orchestral soundtrack sounded beautiful in isolation, it got immediately started to get a bit lost every time Noctis and co opened their mouths. In fact, their voices were so loud compared to the rest of the soundtrack that it felt like they were shouting down my ear canals. The zips and zaps of battle came across in much the same way, too, making every sound incredibly detached from what was happening onscreen.

Thankfully, Hellblade: Senua's Sacrifice sounded a lot more balanced when I ran through the game's opening cutscene, but I still felt the need to turn the volume down every now and again to prevent the voices inside Senua's head from becoming too overpowering. The whispers and snickers were wonderfully crisp and clear against the rumbling thunder and ominous strings, but occasionally it all got a bit much, like I was being shouted at again despite their voices being all soft and soothing.

It didn't help that I kept being distracted by the Elite Atlas' braided audio cable, either, which I could hear moving against my collarbone every time I moved my head or shuffled about in my chair. It's quite a heavy thing, thanks to the inline volume and microphone mute control, so it ends up sitting quite close to your body. Admittedly, I didn't notice it at all playing Doom due to the sheer amount of things going on in that game, but it really ruined the atmosphere in both Hellblade and Final Fantasy XV.

It's a shame, but not as much as the headset's weird balancing issues overall. It might, of course, have something to do with the fact that Turtle Beach's 50mm 'Nanoclear' drivers have been "created specifically for esports", according to the product page on their website, but given how it prioritised the voices in Final Fantasy and not the gunfire in Doom I'm not so sure that's really got anything to do with it. 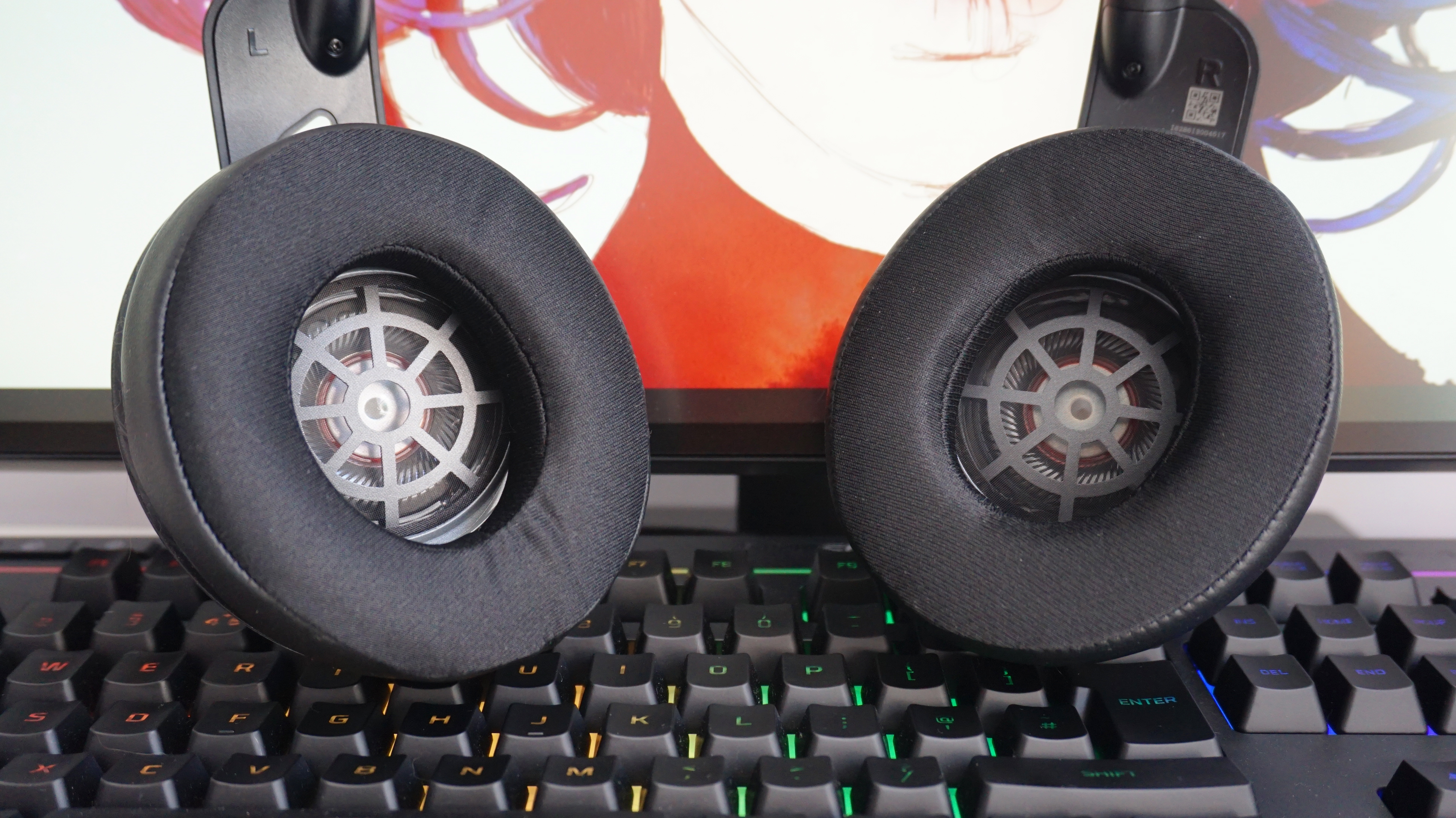 The bendy, removable microphone, at least, was very clear indeed. There was quite a bit of background hiss when I recorded myself speaking in Audacity, truth be told, but I quickly discovered that was because I had the volume control turned all the way up to max. Knocking that down to a more acceptable level, the hiss was a lot, lot quieter. Still there, but definitely less noticeable.

As a more general pair of headphones, the Elite Atlas also fared pretty well. My Final Fantasy XV soundtrack over in iTunes was a touch muddy in places, particularly the strings in busy battle theme Hunt or be Hunted, but there was plenty of detail elsewhere in the orchestral swell of my Octopath Traveller and Heaven's Vault soundtracks. Rock and pop songs were also lovely and clear, offering a good balance between the vocals and accompanying backing tracks. There was perhaps a very slight bias toward the bass side of things, but overall it felt a lot more even than my in-game experiences. 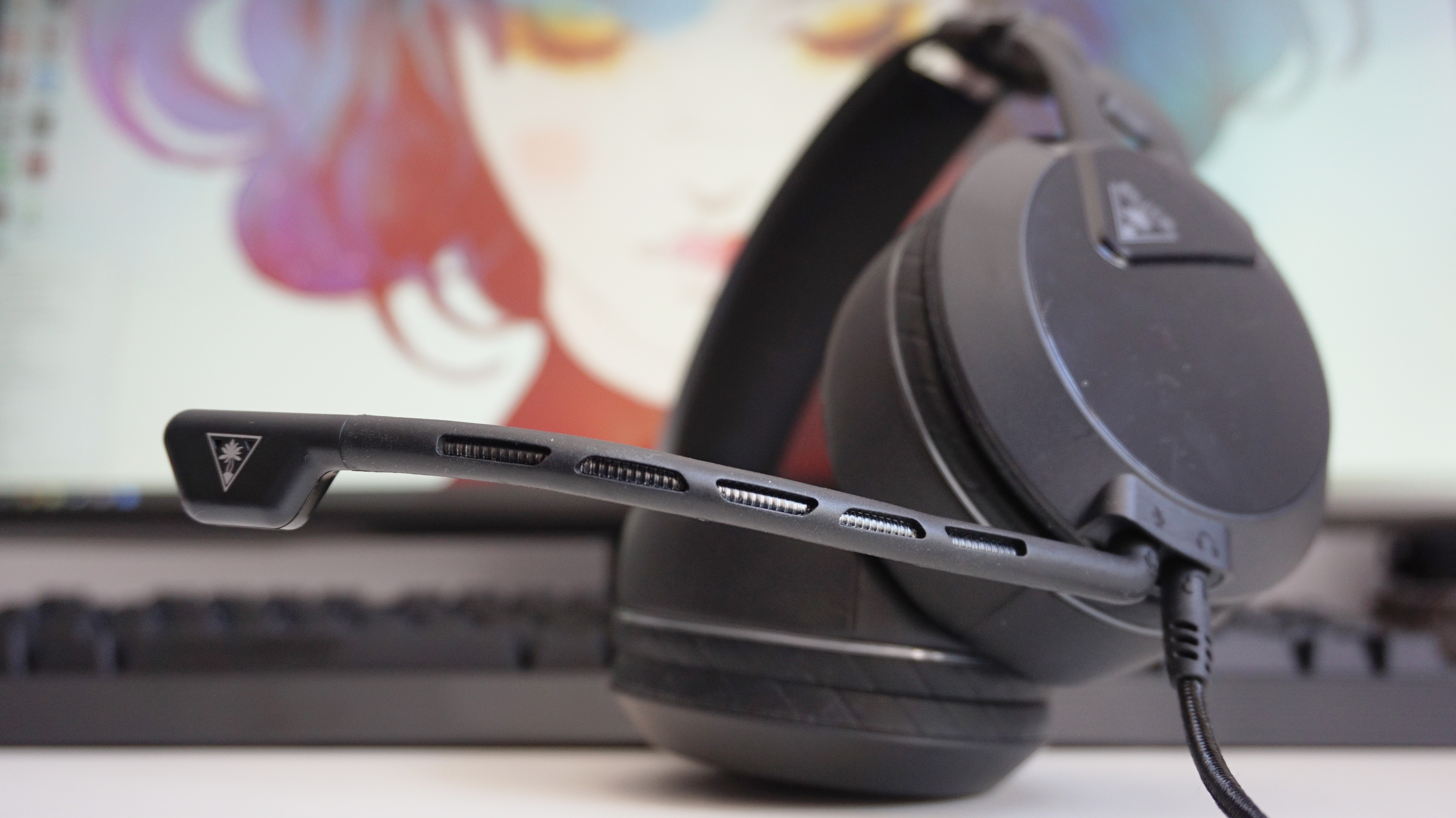 Overall, though, I think the Elite Atlas is a bit of a mixed bag. As much as I liked its immersive bass and crisp sense of clarity, I was less keen on how it married the two together. With so many of my test games feeling a bit lopsided during testing, I found myself increasingly longing for the £50 / $60 Atlas Three instead, whose bass you can tailor a bit more to suit your needs. It may not be what the pros wear, but for me it's definitely the MVP of Turtle Beach's entire Atlas line-up.