When I published my Vampyr review (summary: choice is an illusion, apart from when it's a roulette wheel; the dialogue's stuffy but the fights are tight if you invest in them), I estimated that I was about two-thirds of the way through the game. With embargoes and deadlines out the way, I was curious to see how it all resolved, and particularly what, if any, pdark consequences would ultimately ripple outwards from the choices I had made. It'll just take few hours, I reasoned. One more working day.

16 hours of increasingly maddening play later, I grimly watched the credits roll, my mind a whirl of relief, contempt and despair. If my post-review return to Vampyr had immediately collapsed into the combination of soporific lore and desperately ill-judged combat excess that did its final furlong, I wouldn't have minded so much. What frustrated me was that this was preceded by a strong stretch wherein it finally became the game of agonising vampiric dilemmas that we'd hoped it would be from the start. So close to brilliance, and then this abrupt decay into absolute folly.

Note: though this does not reveal the fates or secrets of any characters, it does describe some of Vampyr's late-game themes and structures, including how it depicts the consequences of your decisions (though not what those consequences are). Do not read the below if you prefer to go into the game totally blind. 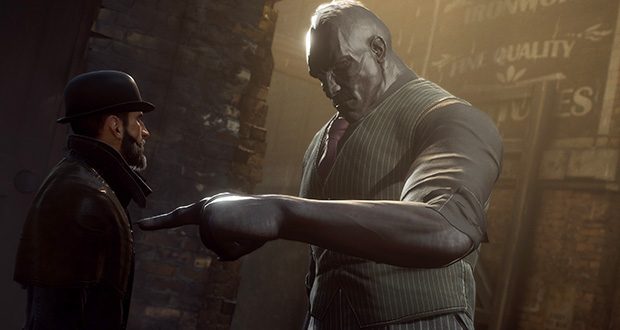 One of the many, many, failures of Vamypyr's final act is that it actually has multiple final acts. False endings (or, at least, a string of scenarios that seem, logically, as if they must surely mark a final denouement) abound, and it ends up outstaying its welcome massively. Not purely in terms of tale - it also drags you back to most of the major locations you've visited throughout the game, for an assortment of final confrontations with most of the major characters you've met throughout the game.

There's nothing new to see by this point, just long trudges through Vampyr's by now over-familiar locales, cursing at your super-strong, magically teleporting character's mystic inability to make his way past a locked wooden door or waist-high fence. A few gates to allow direct traversal between adjoining but previously fenced-off districts have opened by this point, but it's still a long, long run through the same old places, patrolled by the same small handful of enemy types.

Insult to injury is that Vampyr does finally offer up a brand new location - a suitably Stokerian crumbling European castle, no less - after the final battle has played out, but it's used only for a deeply irritating game of hide and seek and as a backdrop for the game's most interminable, and most passive, conversations. There's even some non-urban exteriors and daylight - the first flickers on sunrise - for the first and only time in the game, but no, this grand place is mere set-dressing for barely-interactive cutscenes. A waste. 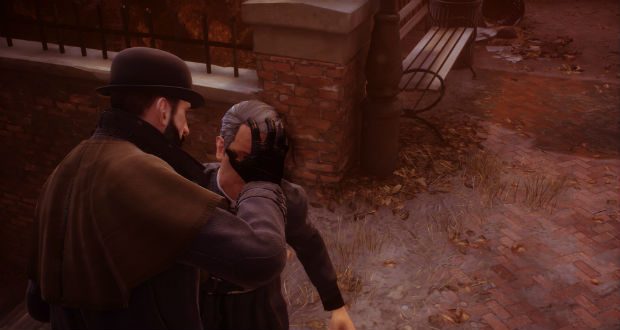 Prior to this is one of my most miserable boss fights in recent memory. As I said in my review, Vampyr boasts some surprisingly solid baby Blood Souls combat - you're managing stamina as well as slashing and dodging, and can call forth a variety of blood magicks which can combo in brutally efficient ways if you know what you doing, or you can be pummeled into so much pasty-white pâté within seconds if you don't. This particularly applies to boss fights, these tornadoes of hitpoints and megasquish attacks, which can be brutally unfair if you haven't got the rhythms of stab/shoot/magic down and haven't specced your character's skills smartly, or can be demolished adroitly if you learn attack patterns and all that jazz.

Thing is, though, all enemies in Vampyr scale to your level - in fact, to several past your own level, in order to ensure a consistent challenge. It's not the greatest idea in the world, as it makes improving your powers feel functionally pointless - all this new strength, only for it to not matter a jot because every vampire hunter and rogue monster in town magically has orders of magnitude more hitpoints.

It definitely keeps boss fights tactically interesting in the main, and stops general mob fights becoming tediously easy, I guess, but it does make every repeat fight you do because the plot is dragging you back to the other side of town tediously long. Those final hours of backtracking ask you to endlessly relive the same long skirmish against the same four or five enemy types.

And then there's the final fight itself. Generally speaking, Vampyr respects our time when it comes to the big fights that you'll almost certainly lose a couple of times before you dust 'em. Auto-checkpointing before it, no repetition of cutscenes from the second attempt onwards. Thank you, thank you. But all this smart thinking goes out the window for the climactic bally-hoo. It offers two tough bosses in immediate succession, no checkpoint in between them, and a big chunk of unskippable dialogue before you can start bashing the second one, who is also immune to stun attacks, so good luck if you've specced your character that way. A further setback I suffered was that the ammo and health packs I used during my first, failed attempt weren't restored for subsequent reloads. That meant a dozen miserable stompings, unable to fire my meticulously-upgraded shotgun or insta-heal. I made a lot of noise.

But the real problem was that scaling system. One of the reasons it's there is to support a relatively pacifistic playthrough of Vampire - not killing any NPCs and avoiding most roaming monster/hunter combat, thereby missing out on most of the available XP. So you barely level up and neither do the enemies, bosses included - but you can still collect the parts needed to make your weapons powerful, which is how a peaceful player still has a fighting chance against the mandatory big bads. But if, like me, you've diligently side-quested, killed a lot monsters and a handful of NPC Bad Dudes (e.g. the racist slum landlord I mentioned in the other article), you're gonna be somewhere around level 30, putting everything else at around level 35. I've double-checked elsewhere and, yeah, if I'd pretty much avoided fights and extreme justice, the maddening final bosses would have been a cakewalk.

You could argue that it's a clever twist upon the central What Manner Of Man Are You conceit, but I'm pretty sure it's a mix of wonky balancing and the age-old problem of otherwise ambitious games collapsing into a morass of constant, exhausting combat in their final furlong.

Which brings me to my greatest sadness about Vampyr. Its first half suffered from most of its conversations failing to offer any real choice, despite being adorned with the superficial furnishings of moral dilemmas, and there being zero pressure to drink anyone's blood, thus sapping all tension from the whole 'ooh, are you a nice neck-nibbler or a bad vein-ripper?' concept of the game. Conversely, it throws in a few situations where your decision very much does matter, but the consequences are a lottery rather than a truly informed decision. 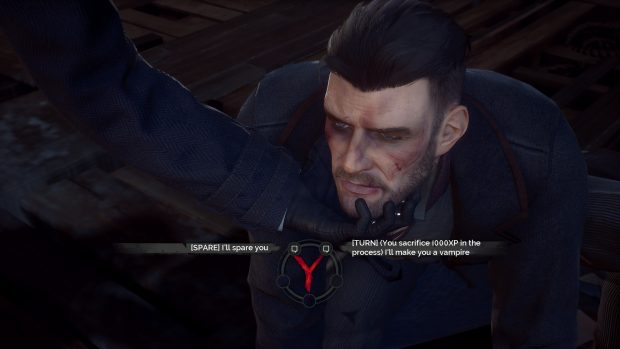 Around 70% of the way through the main story, Vampyr finally found its choice'n'consequence mojo, presenting me with exactly the kind of agonising, even chilling dilemmas I'd signed up for in the first place. Again, I'll spare detail, but it's classic good vamp/bad vamp stuff: leave a bad sort alive knowing that they'll go on to harm others, or go against your code and kill 'em. Save someone from a miserable death by turning them into a vamp, but knowing they've got some pretty spiky skeletons in their closet that may well mean they abuse their new immortal power. Let someone who's sworn they're going to harm you and those you love go, or break out the fangs.

There's nothing to rival the sadomasochistic grey areas of Vampire: The Masquerade - Bloodline's Heather dilemma, but in this stretch of Vampyr it makes a far better fist of making these decisions really hurt. I didn't even begrudge the checkpoint-only, single save system at this point - these moments felt so massive that I knew it was only right I should live with the consequences. I settled in for what I was sure was going to be a truly meaty final act, as all the dark - and often very obviously disastrous - decisions I made came to bear upon the game's diseased world. 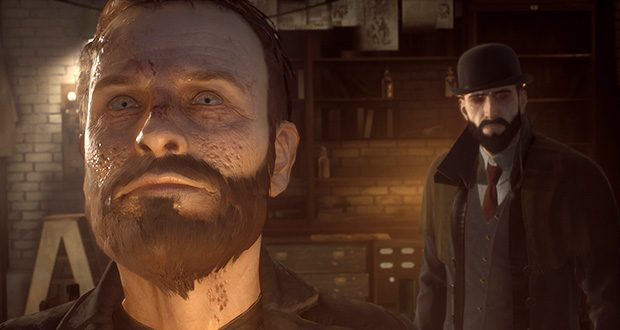 And then it all went wrong. For all the reasons listed above, and because, actually, none of those decisions mattered after all. NPCs who'd sworn undying vengeance upon me would audibly shift in tone mid-conversation, because the plot demanded that I needed some doohickey they had to save all of London; characters I had been sternly told would be a huge problem if I let them live were simply shuffled off-stage; and most of all, everything I'd chosen to do myself was ignored because my character had One Destiny.

A destiny which is to be unfailingly professional and judgemental towards others, even mere seconds after he was practically showering in blood and creating new vampires with wild abandon. And, most of all, a destiny which is to spend an extreme amount of time listening to other characters tell him what the plot is. 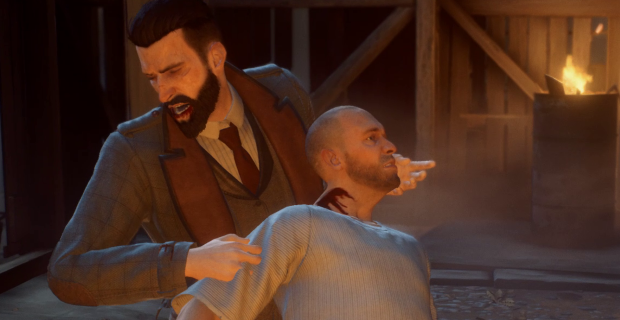 Though Vampyr tries to tie its protagonist to its central tale, really it's someone else's story, and he's just the conduit between scenes. Sometimes he is given the illusion of his own agency, but in the final couple of hours particularly, this is abandoned: he is there to be told what to do. The nature of the epidemic that grips London even morphs from merely vampiric concerns and into something far more mythic and laughably overblown, and sadly impossible to feel a connection to.

And then that final castle, that wasted space, more NPC lectures and, at last, a totting up of what you have done. Once more, I won't spoil, but the final, final scene does branch depending on how many you have killed or spared throughout the game, but really so little is affected that it feels almost meaningless. The greater tale of London's health and the people you met as you tried to help or hinder it is kept to one outcome, and so the forking concerns only one character - one the game never offered a real choice about how you treated them. Vampyr bows out as a game that relentlessly told its tale, for all its illusion of lethal choice, made all the worse for having briefly flared into brilliant dillemas before its collapse into poorly-judged combat sludge.

That is the tragedy of Jonathan Reid. Twenty hours with Vampyr were well spent indeed - the simmering, near-apocalyptic murk of this desperate London, the moreish early fights, the gentle investigation. The next twenty hours were not.