I feel like Vampyr has been part of my life for a very long time. It was only three years ago that I first saw the game, but I've been following it closely since then. It's always been at arm's length though, seen in the occasional video playthrough or prior to an interview with the developers. Last week, I had my first chance to play it, and spent two hours healing and hurting the people of London. It's been a long wait and at the end of it, being dead was a bit of a drag.

Vampyr is a confused game. Perhaps that's apt. It begins, as these stories often do, with the protagonist, Jonathan Reid, waking up with what seems like the world's worst hangover, but turns out to be actual undeath. As if that's not bad enough, the whole city of London seems to be suffering from corruption. The game is set in the aftermath of the 1918 Spanish flu epidemic; there are bodies piled in the streets and many of those still living are afraid to leave their homes.

Reid blunders around the carnage for a while before the horror of his situation becomes clear, then he rapidly comes to terms with his new status as a blood-thirsty creature of the night.

He's quite upset, with good reason, but he also seems just a little bit pleased that he'll get to hang out with the cool Romantic goths at their poetry nights. Hardly anytime has passed before he's coming out with lines like, “What is life but death pending?” and “Have the very streets of London become a mausoleum?”

Tell me those aren't the words of a man who has been waiting his whole life to join Club Dracula.

Being a moody, handsome morgue-dodger isn't all red wine and roses though. Reid was a doctor in life and he's going to be a doctor in death. That's the game's central conceit – you are a healer but also, by necessity, a killer. A preserver of life whose own life is a grotesque parody, lived out in shadows and filth. And once you arrive at the hospital, which is the central hub for at least the early portion of the game, things start to get interesting, with social webs of potential victims forming, and decisions about who to spare and who to feast on distracting from the combat.

Oh, the combat. Perhaps I'd have more patience for it if I hadn't been trying to cram as much interesting play-time as possible into my two hours with the game. The prologue seemed to last forever, taking up precious time before I even reached the hospital, and managing to be both an enthusiastic but ineffective exposition dump and a series of unhelpful combat tutorials. Everything happens at once, but very slowly.

You wake up, realise you're a vampire, then within half an hour you've discovered a clan of monster hunters that apparently know all about your kind and are defending London from an infestation of vampires. They seem to own the streets and are, in fact, the only people you'll see as you make your way across the city, searching for the creature that created you.

Reid shouts things like “don't make me do this” as you sneak up behind them and chomp on their necks, slurping their arteries like cheese strings. They, in turn, call him a “parasite” and try to set him on fire.

Combat is simple. You have either a two-handed weapon, like a scythe, or one in each hand – say a machete and a pistol. Being a vampire, you have powers too, though all but the most basic must be unlocked. The most basic are powerful though, allowing you to take loads of damage and to dodge around rooms and streets at supernatural speed. Kill a few hunters and you'll unlock your feral claws, letting you charge up a big attack that wallops enemies onto the floor so that you can pounce and drink their blood.

I called the tutorials unhelpful and that's because they don't do a great job of explaining how important blood is, and how you can get more of it. The first off-hand weapon you'll find is a stake and it lets you stun enemies. That's great because when they're stunned you can smooch them until their blood dribbles into your mouth.

But why do I need the blood, you might ask – it's basically the mana that your vampiric skills require.

The problem is that hitting an enemy with the stake doesn't release a torrent of blood and most of the time it doesn't stun them either. There's a sort of “TWOING” sound effect and the stake bounces off harmlessly. Is there a timing to master or do I need to strike them from a particular angle? It's not clear. So I spam the stake until the hunters reel and then I suck them dry. That seems to work, but I can't help but feel it's not quite right. 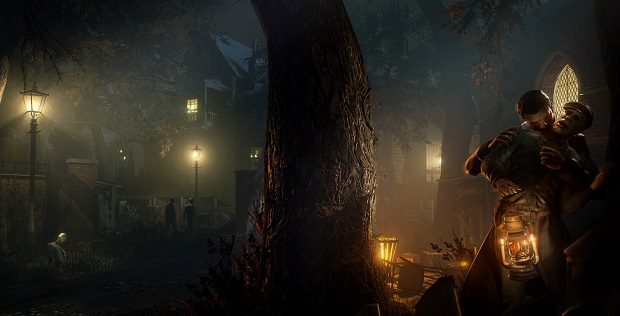 Later, I had to fight skal, which are effectively scruffy vampires. You've got your sexy aristrocratic vampires at the top of the pile and the skal at the bottom, eating rats in abandoned warehouses and barely able to string a series of snarls and groans together. They're tougher than human enemies but I found the fights more a test of patience than skill. Dodge, hit, stab, charge blood, claw, suck, dodge, hit, stab, charge blood, claw, suck. There are more hitpoints to chip away at during tougher assignments but the process is the same.

I've spent all this time talking about combat and I wish I hadn't spent any time talking about combat. But this is exactly why the game is a muddle. I want to talk about the characters I met and the way I had to learn their secrets by talking to their friends and colleagues. The more you know, the sweeter they taste, effectively, which means you get a bigger experience boost if you mesmerise them, lead them somewhere quiet, and drain them.

There's a lady who thinks she's a vampire but is actually suffering from Cotard delusion, and across the ward from her is a soldier with severe burns across his face who allows her to drink from his veins, satisfying her cravings. Reid's reactions to this whole scenario and the people involved shows the writing at its best; he wants to be Mr Rational and to help, even if he might have to be cruel to be kind, but he's also...well, he's a vampire. That goes against his rational worldview somewhat.

The key complication of Vampyr is that strength comes through blood, so to level up your abilities you'll need to kill some of the NPCs you encounter. Keep them alive and learn about their lives and secrets and the reward for killing them increases, but might also discover hidden depths that make murdering them seem very unkind indeed.

It's a smart idea but from what little I played, it seemed far too easy to fill in all the blanks. Talk to everyone about everything and you won't go far wrong. There are dialogue choices but whatever I had Reid say, even when reacting to people in a hostile manner, I always seemed to be able to step back from a decision and try different approaches. That might not be true throughout the game, and I hope it isn't because the ripples of my decisions would be the main attraction.

Killing someone and seeing the effect of their death on their friends and family could be awful. In the best possible way.

But why, you might wonder, would I want to become stronger? Well, there's a plot. It involves the source of the infection, I'd guess, and the vampire who turned Reid at the beginning of the game. To move through the plot you're going to have to complete quests and that means fighting lots of skals and other vampire types, as well as those hunters.

I got involved in a mission to retrieve some medical supplies from an abandoned building, over-run with skal. It involved lots of repetitive fighting and following objective markers through dingy rooms.

This is the confusion of Vampyr. It's a game that tells me that taking a life matters, but then finds ways to throw disposable enemies at me whenever I leave the safety of the hospital. It's a game that wants me to consider my choice of victim, but I'm only killing them so that I can unlock awesome new murdery vampire abilities. And I was shocked by how quickly it moves from being the story of a freshly turned vampire to being a game in which the existence of vampires, in various forms, and the presence of a vampire-killing cult in central London is entirely ordinary. Some of the mystery of the myth is waved aside far too quickly.

Two hours is far from enough to judge the game as a whole and my hope is that I've been scratching at an unappealingly scabby surface and if I'd been able to keep at it, I'd have found that sweet blood I craved. Only time will tell, but for now, I'm going to proceed with caution.

Vampyr is out June 5th.