The Hearthstone meta has been a bit of a mess recently. The new Demon Hunter class smashed through the entire game like a massive concrete dog through wet tissue, and although two balance patches were swiftly applied to rein in the madness, I'm gonna be honest and say I'm not entirely certain what's going on now in terms of the best decks to use. But if I'm even more honest, that's fine. Because at heart, I've never really been interested in using the best decks. Even when I do, I'm neither skilled enough, nor a committed enough daily player, to pilot them far up the ranked ladder.

My soft spot is for "meme decks" - decks built around an extremely powerful central interaction, that usually does something spectacular, but is either too unpredictable, too inconsistent, or just too situational to be genuinely competitive. Hearthstone's last two expansions, Ashes Of Outland and Descent Of Dragons, added some bizarre cards to the pool, and as I highlighted with this feather-clogged frenzy of birds, there's plenty of meme potential in them. So while the Demon Hunter wars rage in the many, many ladder ranks above me, I've decided to revisit some meme decks to see how they're faring. Today, I've been having a go with Reliquary Shaman - or as I like to call it, The Fist Of Sadness.

Reliquary Shaman is such a silly deck, that the card it's built around isn't even in it. The card in question is this one, the Reliquary Of Souls: 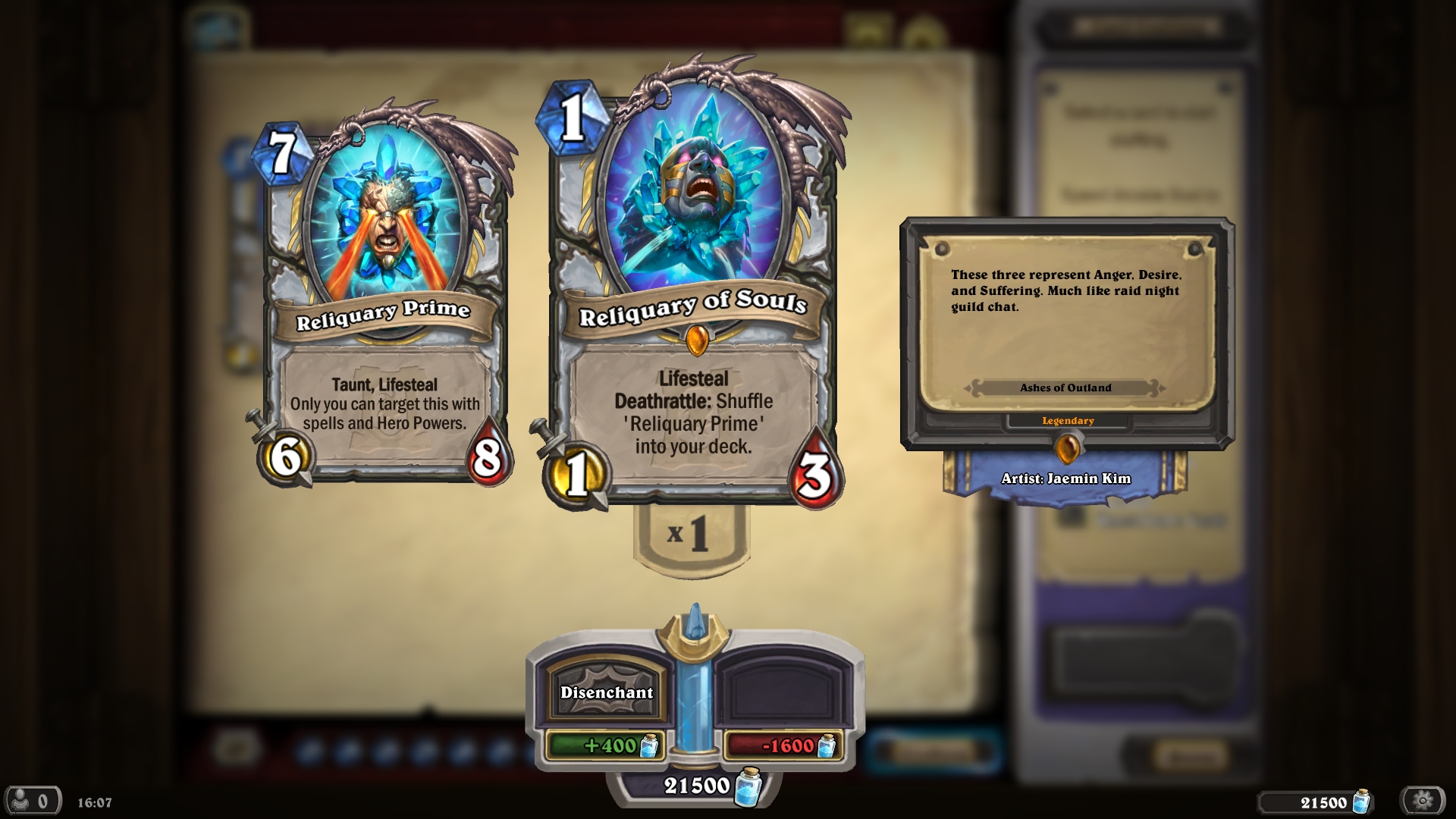 Old Relly is a sort of shouting face with lifesteal - not all that special, but he shuffles a massive version of himself with taunt into your deck when he bursts, and if you can find ways of getting a few of them tucked away, they can easily win you the late game. Now of course, RoS is a Priest legendary, but thanks to a quirk of the current card pool, it's available to Shaman. How? Through the wonderful Fist of Ra'Den, that's how: 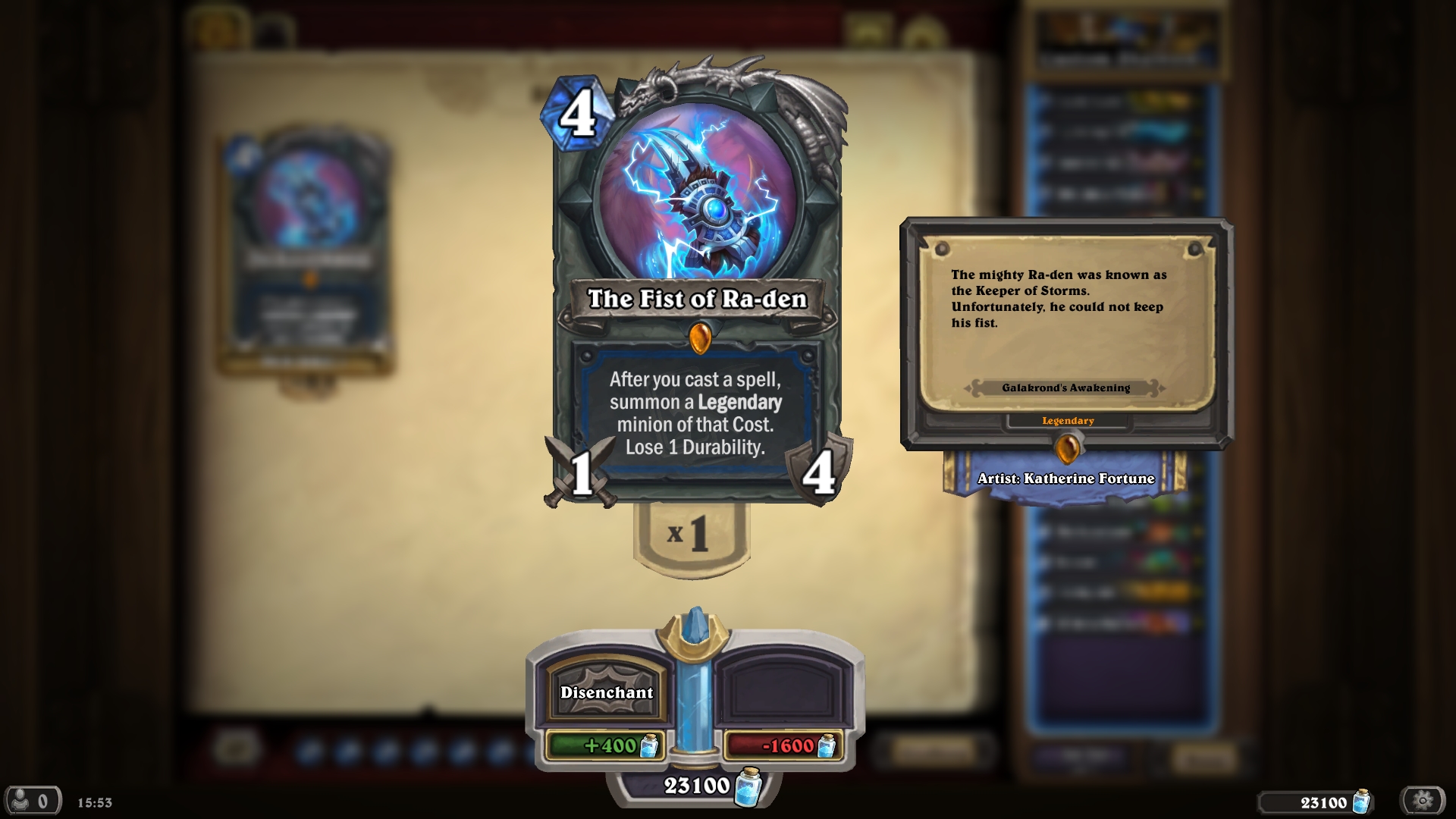 Reliquary is the only one-cost legendary card in the standard card list at present, so if you cast a one-cost spell with ol' fistus equipped, you're guaranteed to summon that good old shouting face to help you out. And Shaman, after all, has a good few one-cost spells. I've stuck the whole deck list at the bottom of the post, with an import code and all, but to give you the rough gist, here's how the deck works: 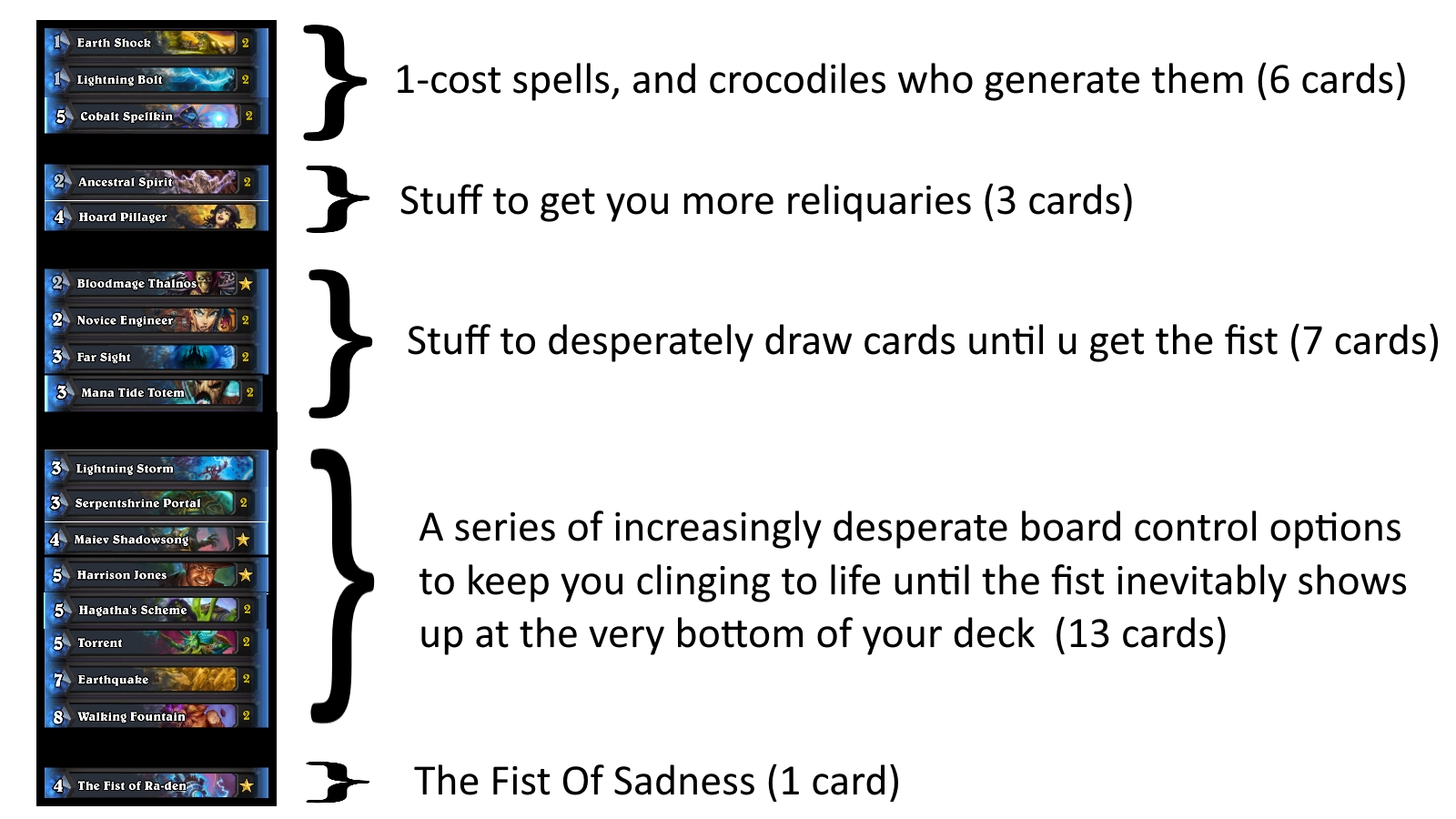 As you can see, just one third of the deck comprises the actual core mechanic: getting the Fist, firing off one-cost spells, and then replicating the Rellies generated. All twenty other cards are simply things to hasten the arrival of the Fist, and tobkeep you alive while you wait. There is, it's fair to say, quite a lot left to luck. But surely, you would think, if you can just hold on long enough, the lifesteal capabilities of the embiggened Reliquaries will bring you back from the brink?

You would think that, wouldn't you.

Well, here's how it looks when it's working: 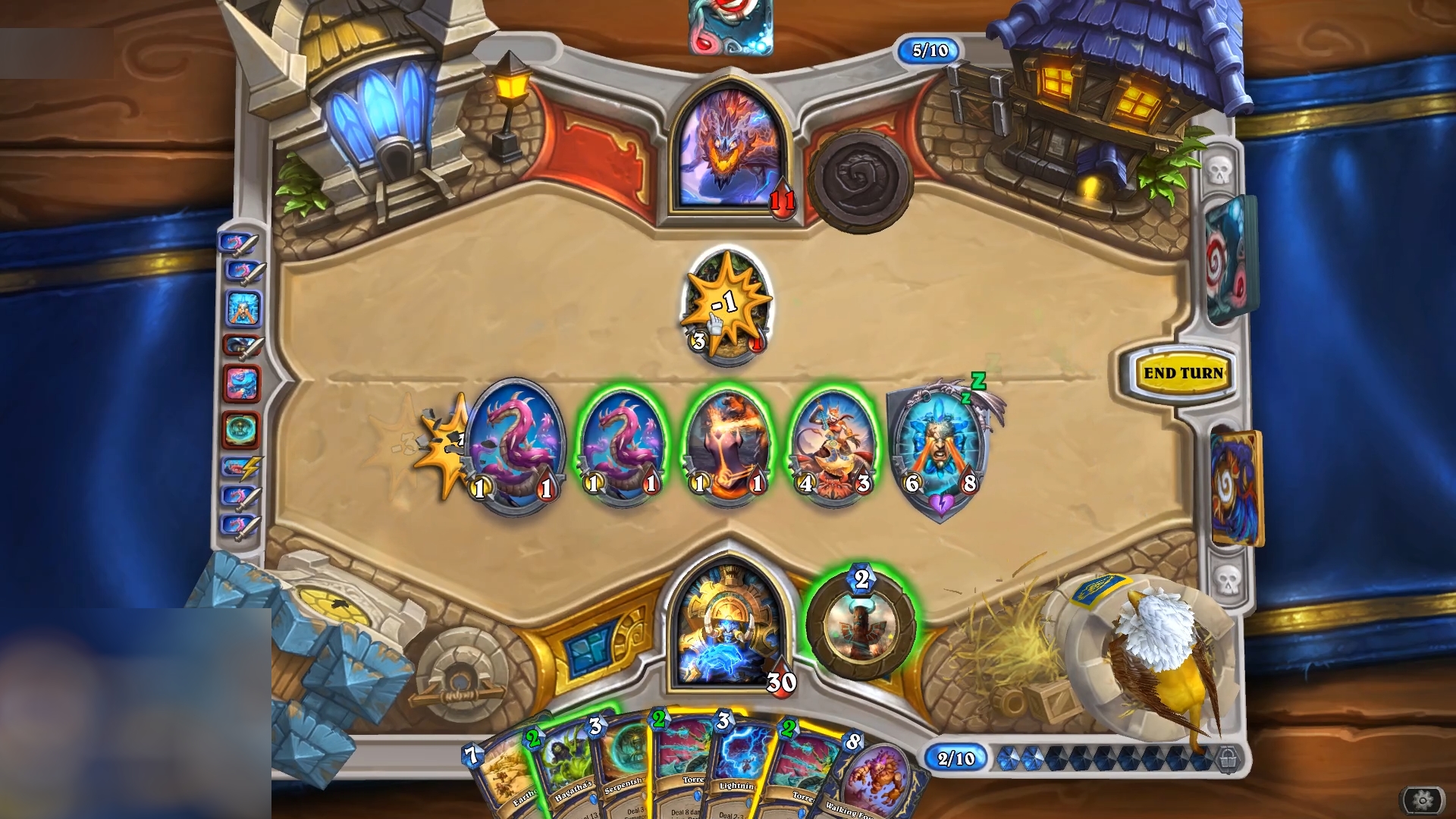 The bad news is, that's the one game I won out of six played, against a Galakrond Shaman who I'm pretty sure was using an outdated deck. And even then, I think I got a grand total of two upgraded reliquaries onto the board before I beasted my opponent with a load of random crap from firing off spare Fist charges with my big board clear spells. The fact of the matter is, this deck's based on one of those theories that seems absolutely foolproof, but comes off vanishingly rarely in practice. 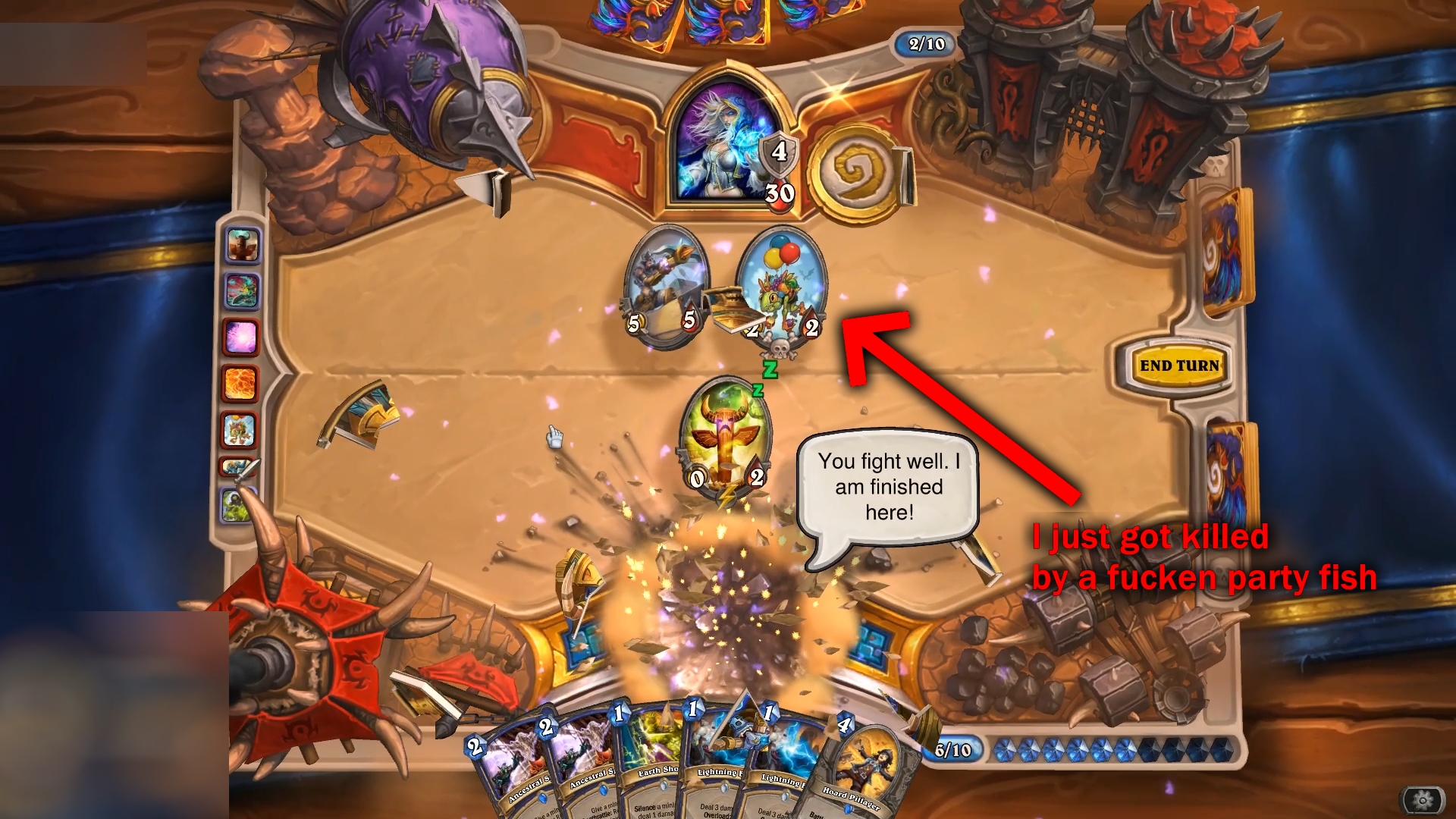 While waiting for that single win, I was trounced by a ghastly variant of Resurrect/quest Priest, two horrifically aggressive Dragon Mage decks, and - humiliatingly - a barely customised version of the bog standard Paladin deck. Admittedly, the Fist was in my final ten draws in each of those games, which is poor luck, but this deck really does make you a hostage of fortune. Without the Fist, the best you can hope for is to survive, and there are no other win conditions. It's like being locked in a shipping container with a load of wolves, and a medieval knight with narcolepsy. If Sir Snoozalot wakes up before you're savaged into paste, you're saved, but until then he's just a heap of snoring platemail on the floor.

Alas, then. The experiment was a bust. But I don't feel too bad: according to HSreplay, Reliquary Shaman currently has an abysmal 36.62% win rate, so the failure was not all my own. Next time, I might try something that gives me a little more agency.

Here's that deck code, if you fancy trying your own luck in the Wolf Box: AAECAaoIBvUE7QWQB+iwA+a3A+2+AwycApQD+QOBBP8FsgatkQOKlAOQpwOBsQPbuAOTuQMA