“It’s not a fucking expansion.” On this Steve Sinclair, creative director on Warframe, is clear. He’s talking to us a few hours before the formal reveal of the ‘it’ in question: Empyrean, the Warframe add-on formally known as Railjack that is adding spaceships, throwing them together in huge space battles and using them to explore previously unseen corners of the Origin System. So if not an expansion - and Empyrean expands Warframe, no doubt about it - what is it? Sinclair thinks of it as a ‘connection’: the means of tying together locations and missions. On a less poetic level, it’s also about what happens when a Tenno (your hero) connects with a giant space slingshot. Spoilers: you should get out the Tenno’s way.

At the heart of the connection is Squad Link, a procedural mission system designed to draw co-op squads spread across the Origin System into single shared stories. Here’s how it works in English: a Railjack team pursues an enemy ship, only to find it enveloped in a shield bubble. They put out a call for help. Down on the Plains of Eidolon (an entirely separate area within Warframe) another squad is enjoying a relaxed fishing session and picks up the distress call. Accepting it, they are given a mission to destroy a shield generator on Eidolon’s surface to aid their space buddies. If they succeed in a tight time constraint, the shield drops and the Railjack team has a much easier run at their target. Give the entire galaxy a pat on the back.

The notion of small tasks adding up to a larger success feels obvious when you see it: it’s Return of the Jedi’s climactic three-pronged attack. (Or as Sinclair puts it: “It’s the motherfucking Moon of Endor!”) Failing a prong isn’t a disaster here. If no one answers a cry for help the mission continues, just without the enemy debuff. It brings to mind the asynchronous relationship planned between Eve Online and Dust 514, only, y’know, it’s actually going to happen. 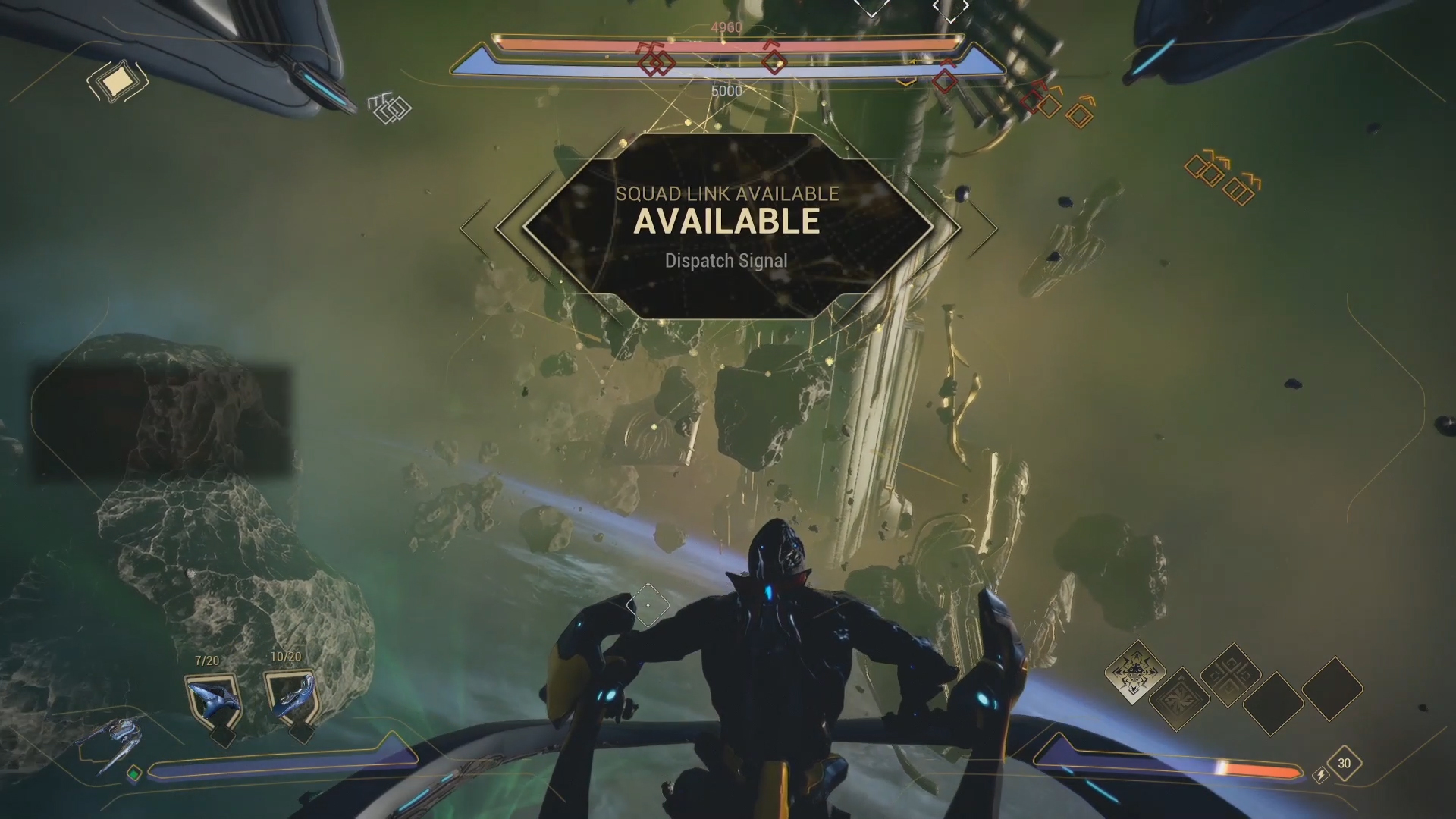 And it’s not limited to this specific Railjacks/open world combo - the Railjack could put out a call for help and have it answered by a squad in a mission, who’ll then get a secondary objective. Or people in a game of Mobile Defence could Squad Link with people in a Spy Mission, and so on. You have the option to opt into Squad Link by having to place a beacon to intercept potential missions, but it’s not yet clear what triggers them in the first place.

If Empyrean finds connective tissue between its toys, it’s also adding the most substantial plaything yet. Your Railjack ship lives in your clan’s dojo, in a new Drydock area. (The barrier to entry for Railjack will be building the Drydock - but the resource cost isn’t currently known.) From the dock you can customise colours, textures, decals and adjust the ship’s loadout, tweaking pilot’s weapons, secondary turrets, missiles, countermeasures and battle modules (think: abilities). Unlike traditional Warframe equipment this isn’t machinery you level with XP, but buy with resources. Once you’ve painted it an improbable shade of mauve you’re free to hop in with three friends and explore the Railjack star chart.

If you saw the Railjack reveal at last year’s TennoCon the basics of flight are unchanged: the pilot steers up front while remaining crew man weapon turrets to aid combat or clear debris, or run around the ship putting out fires or fighting boarding parties. The experience looks less traumatic than last year’s demo, where ship movement lurched the gunners’ sights all over the place. Turrets are now gyroscopic, keeping their view of the fight steady. 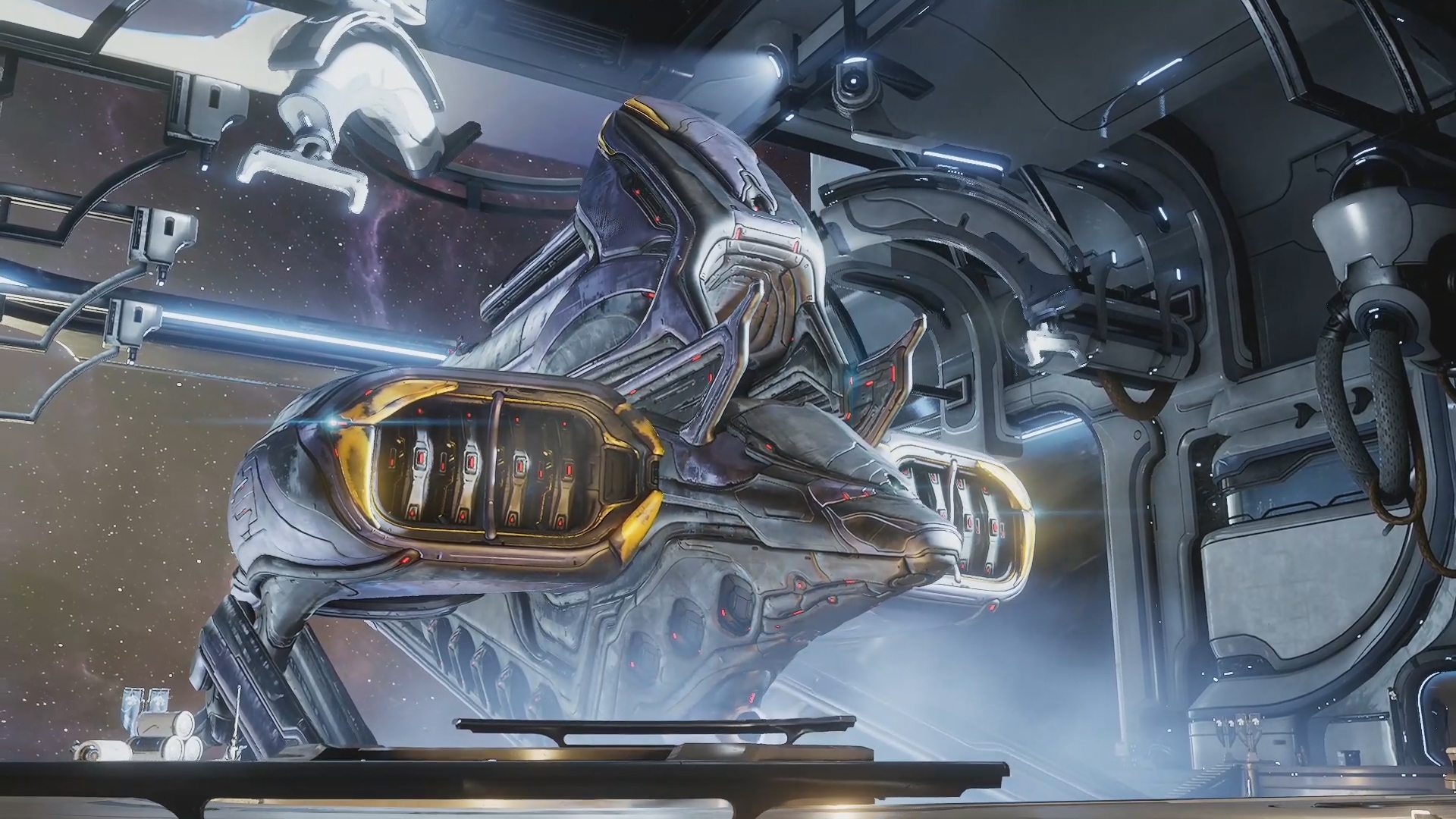 The wider inspiration, says Sinclair, is FTL, best seen in the power management screen where any member of crew can redistribute limited energy between secondary weapons, shield systems or battle module powers, ranging from EMP blasts that conk out ships to tethers that drag entire fleets into one explosive mess. Although you don’t have mods to further shape these abilities, I do like Sinclair’s pitch that this constant recalibrating of abilities is kind of a real-time take on Warframe’s character customisation.

You’ll also see NPCs around the ship. Some will just offer a friendly wave - a lack of military discipline that we fully intend to drill out of them - while others bestow bonuses and buffs to your ship. In a delightful bit of world connecting, some of these are the former Solaris slaves you bought out of servitude by paying their debts. Because it’s good to reward a lifetime of toil on Fortuna by dragging the poor bastards into zero-g warzones. Whoop!

This demo visits the Heliosphere, a new region on the Railjack-specific star chart. The Lin Tower Ruins are a vast debris field - keeping side gunners busy - where an Infested monolith awaits our boarding party. The ability to jump out the airlock and into an Archwing jetpack looked natty at the reveal; it’s still natty now, but is overshadowed by the slingshot: a cannon that fires space ninjas as bullets. Aim at a hull and they’ll pierce straight into that interior mission. Or you can blow up smaller ships with your Tenno missiles.

The Railjack pilot isn’t a lame duck during all this. They could put cloaking on the ship and leave it behind, or use its weapons to aid the away team - we see it use a tactical shock ability to paralyse a room of Infested for the rest of their team to calmly shoot in the head.

Aboard ships you charge through doing what Tennos do best (gymnastics and magic). Reach the bridge and you can hijack enemy ships, to aid chums back on the Railjack. A careful player could kill all the ship’s crew to avoid being knocked off the controls later. Hilariously, if the ship has taken a pounding from your Railjack you’ll have to fix it before it’ll fly. Stolen ships don’t have the same power management controls as the Railjack, but I’d be surprised if that’s the thought that comes to mind as your squad of four tears up the Heliosphere with three purloined vehicles. And when you’re done with it, pump a few rounds into the engine and jump out the airlock as it explodes; the ultimate fuck you. 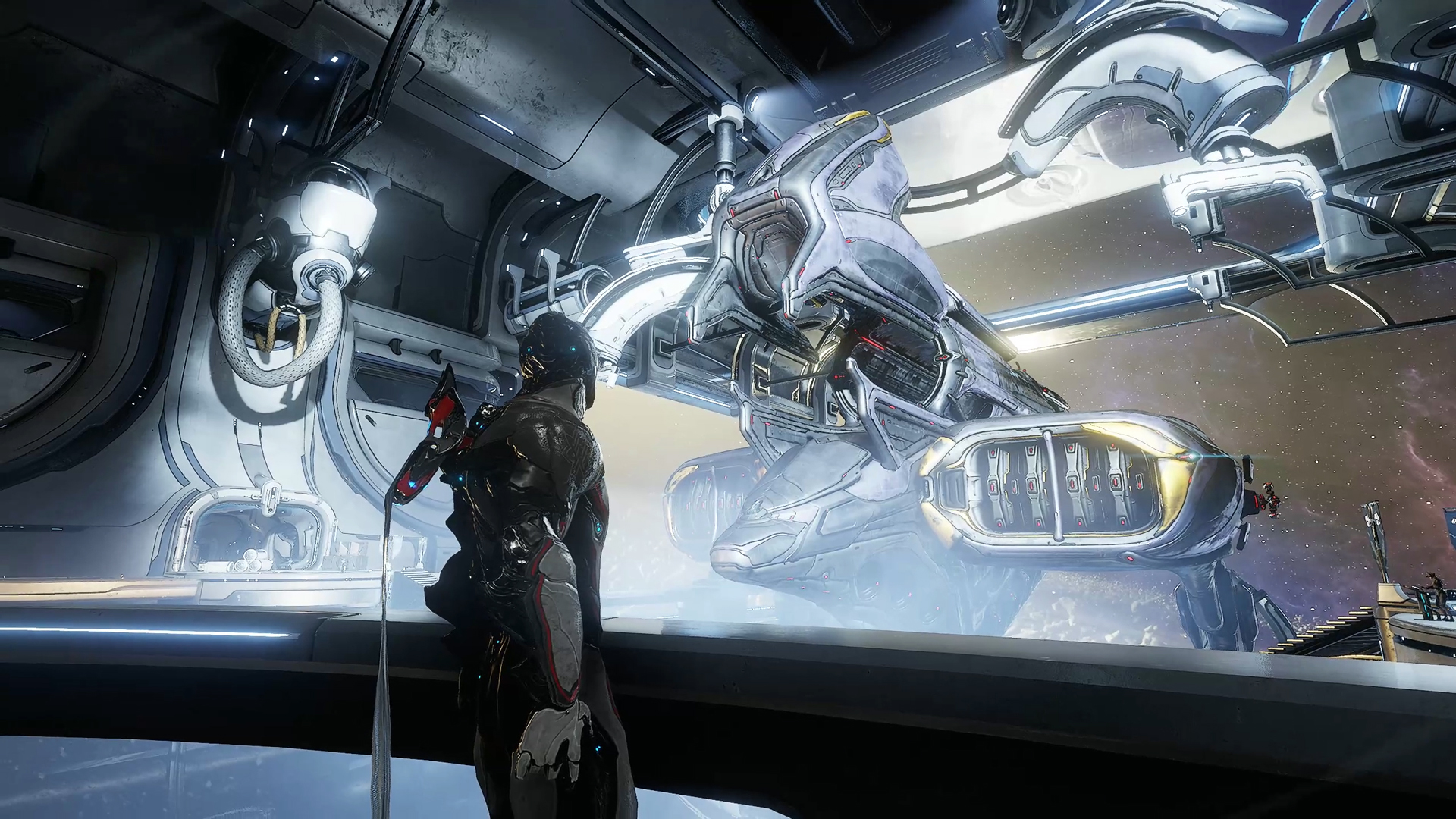 And those explosions will look better than ever before, as Empyrean also brings a game-wide graphics upgrade. Everything in the TennoCon demo uses the new tech: the real-time shadows and shiny reflective floors, just begging for the mother of all knee slides (which you can do, thanks to athletic avatars). It proves particularly striking inside the Railjack, where the cockpit glows in the light of whatever strange celestial bodies you pass by. There’s mention of wanting to prepare Warframe for next generation consoles on the horizon, but we’re assured that Digital Extremes are still dedicated to bringing low spec machines along for the ride with the upgrade.

Another Empyrean wrinkle: not all enemies stay dead. Yes, Warframe is finally introducing its ‘Kingpin’ mode, a longtime-in-the-making riff on Shadow of Mordor’s nemesis system. It sees a humble grunt (procedurally generated for each player) elevated to personal stalker, the Kuva Lich. This creature is pumped on Kuva (bad vampiric juice) and sent out with the intention of dying to a Tenno to absorb their skills in the process. They take the characteristics of the Warframe that kills them - strange armour cobbled together from other parts (we see one with Volt’s head for a shoulder pad) and mastering abilities used to dispatch them. The more Warframes you throw at it, the more twisted it’ll grow.

Enemy invasions aren’t new to Warframe, and Sinclair says to expect the Kuva Lich to behave much like the Stalker or assassins sent by enemy syndicates. This means they won’t be invading cinematic missions - the last thing you want in the middle of a lore dump is some mad hybrid freak trying to kick your arse. But just about anywhere else? Watch your back.

And this is what Sinclair means when he calls it a connection, not an expansion. It isn’t a self-contained patch of fresh, but fenced-off adventures (well, the new Railjack areas, aside), but an injection of systems that spread to every corner of the Origin System. Whether that’s being stalked by your own, personalised assassin, or the option to help a friend in need from the heat of whatever battle you’re currently in, it’s a vision of a bigger, more coherent Warframe.

Question is, when will Empyrean arrive? Talking to Sinclair it’s obvious that there are still decisions being made, questions to be answered. If I’m not firing myself out of a space cannon before Christmas, I’ll be very disappointed. Why not join me in the wait for the update by hopping into Warframe now? It’s free-to-play, and you can grab it direct from Digital Extremes or via Steam. And check out Dave’s hugely in-depth Warframe beginner’s guide to help you get going.