When I play games, my face (oh, it is tired) spends 90% of the time entirely inert, and the remaining 10% wincing or eye-rolling when something kills me and/or I fall off some ledge to my doom. Neither is from a lack of enjoyment, but just from being lost in an internal world of pursuing goals. You almost certainly look equally unsettling when you're gaming.

In West of Loathing [official site], I would estimate I spent 95% of the time smiling. If you knew me (and you don't - only my cat truly knows me) you'd know that's highly unusual. West Of Loathing, a lovely, warm comedy RPG set in an only slightly supernatural wild west, makes me feel so happy.

It's the follow-up to noughties sleeper hit Kingdom of Loathing, a browser-based semi-massively semi-multiplayer RPG that managed to be a satire of roleplaying conventions, a gleefully surreal comedy, a precusor of today's idle games and a genuinely compelling minimalist Zelda-like all at the same time. If you've played that, then you're surely already all over West Of Loathing like bugbears on Meat. You know the pedigree, you know how delightful it is.

If KOL passed you by, fear not. All you need to know is that a) Meat is currency and b) yes, it's all stick figures. (You'll grow to love 'em, within about, say, three minutes.)

West Of Loathing isn't just KOL with a cowboy skin - it's a full move to what we might sneerily call a 'proper' game. No more autoresolving battles with text boxes, no more clicker-style grinding for numbers, no more static art and no more locations that are just clicky icons on map.

It's an extremely accessible and even easy RPG now, with dozens of locations scattered across a large-ish map, with various quest hubs and shops to revisit as you take on missions in suitably Western-themed mini-dungeons, gear up and battle demon cows, skeleton militia and assorted black hats. Some missions involve mild and often ingeniously comic puzzling, but again these are about grinning your way to a solution, rather than frustration. 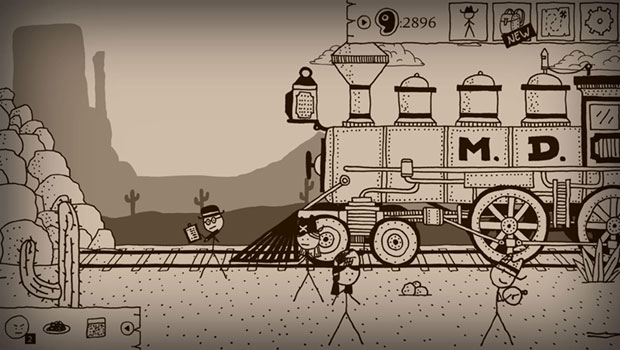 Is it a good RPG? Dunno, really. Don't care, either. To apply the usual expectations of balance and depth and internal logical and narrative pay-offs to this would be like turning up to a nightclub and telling everyone exactly how they should dance. Everything in WoL is there to serve a single, infinitely noble purpose: have a good time, all the time.

It isn't very hard because dying and repeating stuff isn't a good time - or at least not the kind of good time WoL has in mind, which is to be smiling, occasionally laughing and generally feeling all warmy and fuzzy. Challenge games like Dark Souls are a good time too, obviously, but WoL wants to be comfort food in a way I think precious few games really grasp.

Something like the pleasantly mindless carnage of Diablo, or perhaps the shallow bluster of a COD singleplayer campaign, is comfort food in the sense that it chews up large amounts of time harmlessly - Grisham novels on the plane, House boxsets. But they're not comfort food in the sense of making you feel like existence is a little bit rosier while you're in them. WoL does: the word I keep coming back to for it is 'warm.' 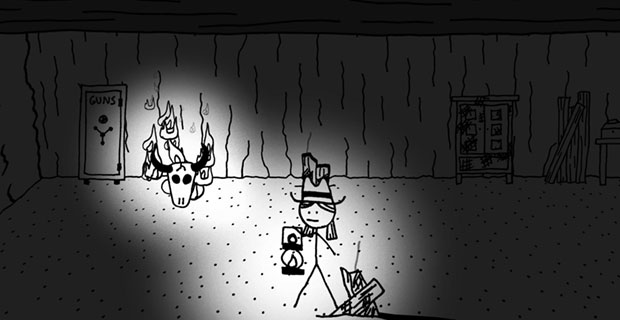 Yes, it has a steady stream of jokes, and many of them are very funny (to name but two examples: graphics options are good/bad/ugly, and at one point I ended up with a pope's skeletal pelvis in my inventory, the description of which read 'it's never been used'), but it does something more important than trigger belly laughs.

It makes me feel welcome, the game and I on the same page, having a lovely time together in this silly black and white world of stick figure cowboys and bandits and nightmare cattle and evil skeleton popes. The central message of WoL is "hey, let's go over there and see what we find!"

It's this ongoing shower of gentle invention, of ideas thrown like confetti, each one treated as a reason to smile, not as anything that needs to go anywhere. Every inventory item has a gag attached, almost every NPC greets you companionably, and everything you do has a payoff.

Maybe, perhaps this amiability goes a little too far - I seemed to level up almost constantly, and very few fights presented any threat or challenge, which, though it spared me the repetition of redoing them, gave me the repetition of breezing through them without thinking.

The battles are the weakest link in this delightful chain, in all honesty. They're JRPG-style, turn-based affairs, and do feel like the most obvious approach WoL could possibly have taken on that front. Sure, it's fun to face down new enemy types when they crop up, and you wind up with plenty of slightly silly abilities to use, but really it's just taking turns to make some hitpoints go down until everyone on the right side of the screen falls over. 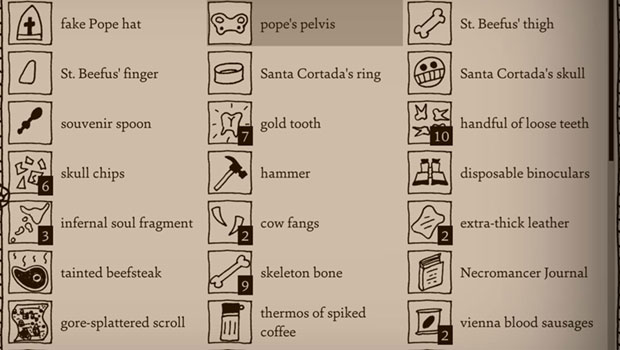 There are a few tougher fights - not quite bosses, but in that ballpark - which require the smallest modicum of strategy, and you'll wind up with so many different powers and items to use that there's usually an option to try something new. These are exceptions rather than rule, because WoL wants you to amble through it with a smile on your face, not ever dash you against the rocks.

In the main, I absolutely endorse this approach, but as the game wore on the fights did get a little numbing. (Usual proviso though: I have to binge-play games for these write-ups, so I'm likely to see orders of magnitude more fights in the space of a day or two than you will). 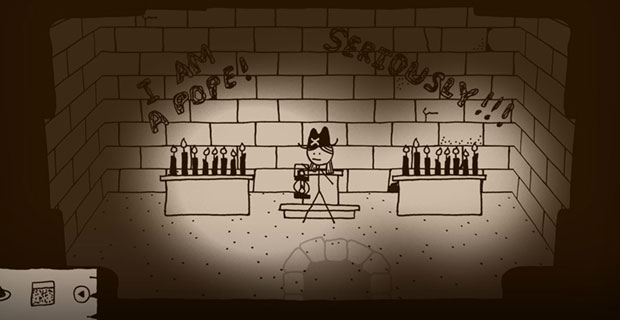 This doesn't stop WoL from being a joy, though it may mean I drift away from it after a while. For now, whenever I fire it up, I hear the bouncy cowboy soundtrack (itself full of gags, like a tiny wind-up piano you can carry around to play a different, tinnier soundtrack), I see the scribbly art whose looped, toonish animations conjure a thousand times more character than almost any multi-million photorealistic megahit I can think of, and I feel warm and welcome and happy and where I'm supposed to be.

WoL is most easily described as a comedy game, and though it is indeed a prime-cut ribtickler, that can be a backhanded compliment - as if jokes are all it has. WoL does something far more accomplished, far more rare, which is to be joyful.