Some folk sure held a grudge over No Man’s Sky, huh?

It’s two years later, and you’d still be hard-pressed to find anything on that game not followed by a few souls still screaming at the void about “lying developers”. Not that I expect the conversation to change - first impressions leave stubborn stains - but, next month, No Man’s Sky will finally let you fly with friends. Multiplayer is finally coming.

I’m not much fussed. There are dozens of massive space games out there, and the simulationist Star Citizen goal of living a second life in the cosmos was never what attracted me to the title. We’ve plenty of those. But a Proteus-like escape into a post-rock procgen universe? Sign me the hell up, captain.

People like me played No Man’s Sky because it felt more mood piece than game. The answer to the question, “What do you do in No Man’s Sky?” might have ultimately been “... Errm... Not much”, but in 2016 that’s all I needed. A walking simulator with 18 quintillion different colour and shape combinations. An adult colouring pad where every image is ripped from an old Chris Foss artbook. 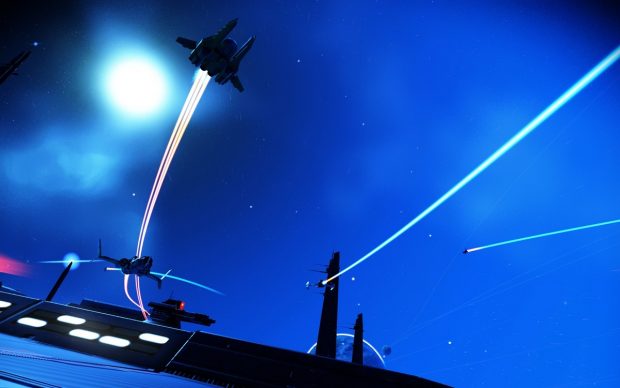 But those weird, specific ambitions aren’t what sold people on a high-profile spacefaring adventure in 2016. People still wanted their space opera. And when No Man’s Sky launched a little more singleplayer than imagined, dreams of an infinite empire didn’t completely die.

While thousands of star travellers have never met face to face, they’ve been able to see each other’s marks clear as day. Names could be etched on the stars themselves; over time, more physical reminders of other players’ passing could be built and found. It didn’t matter that players would never extend a handshake to each other - slowly, over unthinkable distances, the community formed civilisations of ghosts and signals.

No Man’s Sky NEXT isn’t a sudden step into MMO territory - multiplayer instances are limited to 16 players. But the ability to see, hear and shoot each other over practically infinite worlds could cause a seismic shift in how these factions interact. To understand how things could change, we first need to look at how they started.

One of the earliest of these galactic civilisations was the Galactic Hub. Dissuaded by the underwhelming news that the centre of the universe simply led to more universe, a handful of players decided to create their own end-goal. Together, they mapped out and catalogued their own region of the galaxy, naming and claiming planets and plants according to a plan. Creating maps and fan-art, the Hub intended to bring a largely disparate community together, despite vast distances and sparse tools. A third-party pathfinder app even let prospective members track a direct course to the Hub from wherever they were in the galaxy. 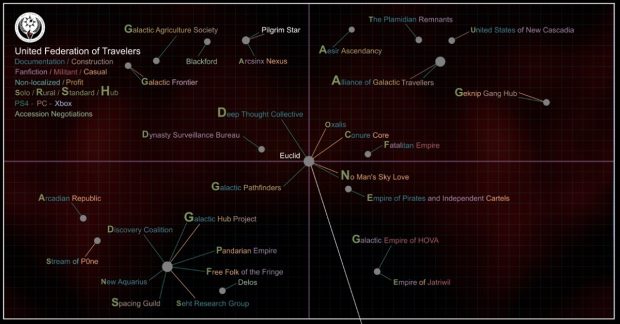 As updates shaped the game, so did they shape communities. With the Foundation update, players could build communal farms, sharing resources through shared bases. Message terminals allowed fleeting communication across time. Trails were built, guiding people along discovered systems with refuel stops along the way.

One of the strangest artefacts of the ways No Man’s Sky actually works reared its head during a planet-generation overhaul update, Atlas Rises, that changed the game last August. Mountainous worlds turned flat; lush forests terraformed into open ocean in the blink of an eye. The Hub had to move, their civilisation rendered unusable by the change, but they hardly left behind empty space.

Archaeologist Andrew Reinhard wrote about his attempts at digital archaeology in No Man’s Sky, and the report reads like the greatest and weirdest science fiction ever written. Bases lost long below impenetrable bedrock; terminals frozen high in the sky where a mountain once stood, now flattened into dunes.

Those empires are still very much alive, however. The Hub isn’t the only player in town, and there’s a number of interstellar nations building themselves a home in No Man’s Sky. Imagine EVE, but with less grand space battling, backstabbing espionage and rampant libertarianism.

With borders comes friction, and the No Man’s Sky community even found a way to fulfil that worst tendency of our species. Full-blown war happened between the Empire of Hova and the Vestroga Hub last November without a single laser fired. Instead, the invading force of Hova made a region of space unmappable through flooding - landmarks for navigation became hard to locate as Hova claimed every missed system, planet and moon. Vestroga disbanded, their nation disintegrated from within. 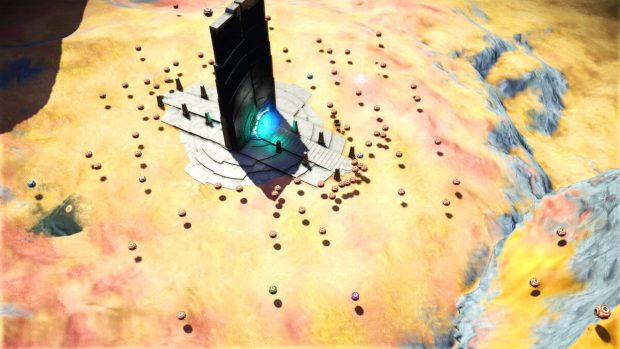 What happens in July, when lasers shot by one traveller can finally hit another? On the scale that No Man’s Sky operates on, it’s unlikely that grand gestures will change. The potential for eight versus eight dogfights could create the impression of war for the more role-play inclined players, but dissolution seems to be the preferred tactic for getting rid of the neighbours.

Instead, I’m interested in seeing what happens once the community can start working together in more constructive ways. Imagine events like Elite: Dangerous’s Distant World expeditions, bringing a flotilla of ships across the galaxy just to see if it can be done. Shrink that to ground-level, and picture a road trip across one of No Man’s Sky’s alien worlds, a convoy of curators meticulously logging the flora and fauna. There’s potential for storytelling of the likes that we see come out of Eve Online, but with far more Utopian aspirations.

As updates have rolled out, there’s a clear sign that this side of the community is gaining the most from No Man’s Sky’s continued development. Bases and farms helped create focal points; freighters aided in trade. The most recent updates have been facilitated by fourth-wall breaking ARGs (alternate reality games), rewarding players with physical tokens for their investigative prowess.

This is the community that No Man’s Sky is ultimately for. Players like me will forever be happy with whatever small improvement aids us in our perpetual voyage; but the vast, silent societies are the lifeblood keeping the game alive. With the long-awaited call for meaningful multiplayer about to be finally answered, I’m excited to see what happens when these civilisations become loud.

If you're interested in how much No Man's Sky has changed since its release, Rich McCormick took a look at it at the start of the year for Update Night.