In Where the Water Tastes Like Wine, stories are currency. You walk the backroads and fields of the United States during the Great Depression, occasionally freighthopping or hitching a ride from one town to the next. Along the way, you meet many people and witness many events, most of them insignificant in the grand scheme of history and the land, but all contributing to a complex tapestry of a certain time and place.

Everything that you witness and every conversation you have becomes a tale in your repertoire, and in retelling these tales you learn about the characters you share them with, around campfires that are dotted around the map. It's at the campfires that stories become currency, and also where the game's combination of folktale and interactive systems becomes muddled.

I'll remember some of these stories forever. The creepy ones, mainly, and the tiny tragedies. Where the Water Tastes Like Wine flits between genres like a whip-poor-will, one moment reminding me of forced migrations and hard journeys through the dustbowl, the next of runaway slaves and departing souls. There's so much to admire and enjoy in this tale of tales that I'm sad and slightly surprised that I haven't slapped a Recommended badge on it. The reason I haven't is quite simple though; exploring these states is exhausting, and I too often lost the meaning of the stories during the long treks from one place to the next. 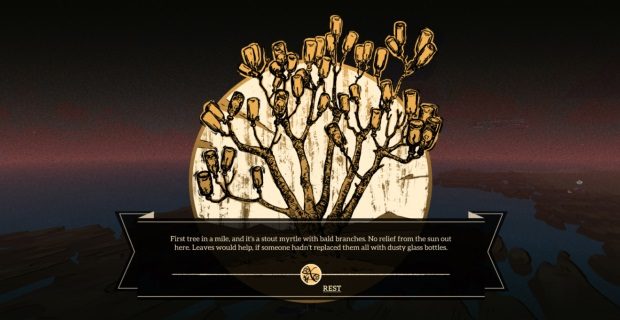 A game about storytelling might seem like a complex thing to describe, in terms of its inner workings, but Where The Water Tastes Like Wine is quite simple. Icons on the map tell you where stories are located, you walk, very slowly, to those icons. You hear and read the story, the narration beautifully delivered in just the right kind of gravely bone-tired voiceover.

At that point, the story is in your possession. An inventory item, basically, to be traded for new stories. Sometimes you'll hear a retelling of a story you already know, embellishing it or changing the tone completely. This is important because when the time comes to share the stories, your listeners will have specific requirements: tell me something sad, they might say, or perhaps they want to laugh in the face of adversity.

The stories are tiny things. Tweet-sized almost. Often, their meaning or emotional impact is hard to pin down until you've heard them retold and reshaped, at which point the phrase that describes them hints at their content and the likely response to them more clearly. A story about a ghost or terrifying urban legend might become a romance or a farce, a scarecrow takes on more sinister qualities. And the stories cover a whole range of humanity and its various conditions, including the multitude of ways people harm one another because of love, prejudice, desperation, anger, grief, greed and poverty. 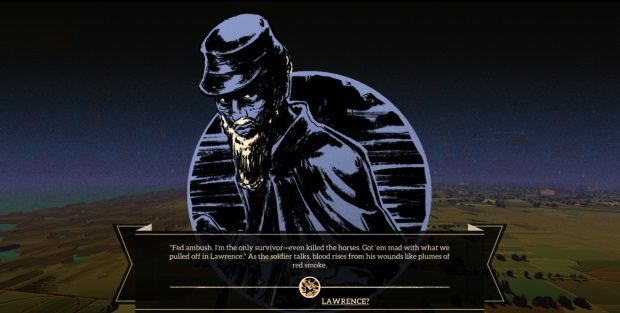 It's often a bleak game, but empathy and respect for people is the common thread in the writing. Often, choices in the encounters that make up some stories relate to an anger or sense of injustice on the part of the player character. You can be a passive observer if you choose, but you can also strike out or lend your voice to the suffering during certain events.

Those are my favourite interactions in the game, when encounters play out like tiny text adventures. It's during the rest of the interactions that my patience started to wear thinner than road-weary boot soles.

The map, where I spent most of my time, quickly became a dreary place. It's large and the character moves across it slowly. A trek from one state to the next, or to a story token on the horizon, probably takes thirty seconds at most, but it's half a minute of nothing. And that means much of the time I spent playing was made up of these scattered half-minutes of nothing. The aesthetic that acts as a backdrop to all that nothing is superb, the map a patchwork of fields, mountains, cities and rivers, and the songs that play as you explore, changing with the territories, are uniformly superb. They evoke a past that probably only exists in the blues and folk music, history shot through with imagination and artistry.

But as the backdrop to these lonely hikes, the music felt disconnected. I wanted to stop and listen to it but for all of its apparent tranquility, the game had filled me with a need to move forward at all times. I wanted to unlock more stories, to chase down my friends as they laid down their bindles around the country. It was no longer a game about wandering, it was a game about hunting stories so that I could exchange them for more stories.

And that's where I started to lose interest. It all goes back to the first line of the review - “stories are currency”. It's a conceit at the heart of the conversations and exchanges that are the key to the wider story that contains all of the others, but it became an abstraction for me. A swapping of tokens to progress through content rather than a patient and involved sampling of the tales people tell. 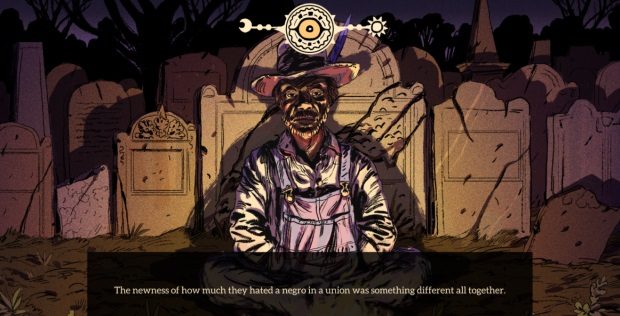 The real shame of it is that I realised I'd prefer to take the mechanics to their simplest form and simply interact with menus to find my rewards rather than wandering across a big map. Whenever Where The Water Tastes Like Wine isn't words, it feels like its turning away from its strengths and trying to find meaning in mechanics that feel disassociated from the actual tales.

At times, that made me think the game was doing a disservice to the stories it contains, but for the most part I've managed to find small pleasures in the passing of time. I just wish I'd felt like I had any connection to the places I visited, other than through the stories I heard. As it is, the words, the music and the map all feel like separate things sitting alongside one another, but never touching. That's most evident in a button that allows you to whistle along with the music. Whistling in time makes you walk faster. It's a pleasant idea that barely ever worked for me and just served to remind me that I wished there were an actual 'run' button. 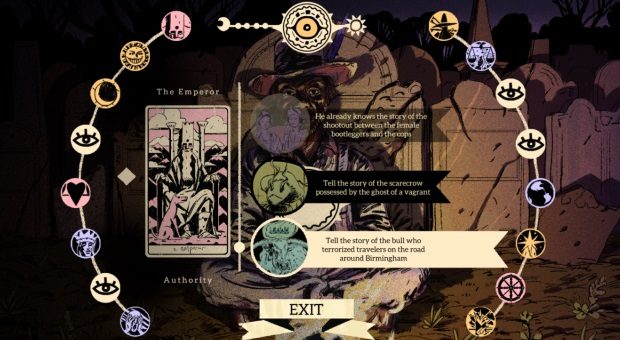 What frustrates me is that I want everyone to play the game, but find it hard to recommend that they do. It's a beautiful and wonderful depiction of a country haunted by its own past and occasionally in awe of its own possibilities, and even though the journey itself felt like a chore to me, the moments when all the individual threads resembled a great tapestry of life and death made me grateful that it exists. Perhaps there is no ideal structure to contain all of these stories, and the meandering shaggy dog nature of the telling and retelling is essential to the tone, but I repeatedly found myself falling into those routines of map-checking and icon-hunting.

Eventually, even though the stories in those icons have more meaning and value to me than a new gun or collectible trinket, I started to treat them as trinkets – the means to unlock the next chapter of one of the more significant stories. I wasn't playing for the sake of the words anymore, I was playing to gather and exchange currency. Where The Water Tastes Like Wine became a game about shuffling around a mostly-empty map, hoovering up icons in order to advance the plot.

The sense of discovery became a sense of duty to see every story through to its ending. Those stories are either fragments, in the case of those gathered in the road, or told in fragmented form in the case of the fireside conversations. There's a great deal to cherish in both varieties, but the journey to discover them drove me to distraction so often that the impact of even my favourite moments was diminished. There's every chance you'll have more patience for those half-minutes of nothing, or that the rules of the game won't distract you from the delicacy of the stories, but for me it ended up being more water than wine.

Where The Water Tastes Like Wine is out today, and is available for Windows, Mac and Linux, via Steam and itch.io for $19.99. Disclosure: former RPS columnists Cara Ellison, Leigh Alexander, and Emily Short were part of the vast writing team for the game.