At GDC this week, Prey's lead level designer Rich Wilson explained why their team decided to change the immersive sim formula for its Mooncrash DLC. Mooncrash is a fascinating artefact: it blends the immersive first-person exploration and triple-A production values of its parent game with experimental, permadeath, randomised elements pulled from roguelikes. It's a marriage that could not be more targeted to my personal tastes, but confusingly, Rich did not cite pleasing me personally as their primary motive.

Some disclosure, though: I've hung out with Rich socially and he mentioned a game I designed, Heat Signature, in this talk. Mooncrash is also a vindication of something I said on a podcast 5 years ago, so I'm heavily biased towards it.

Rich describes the first step of their process as a 'deconstruction' of the particular breed of immersive sim Arkane specialise in. For each component, they asked whether it was something they needed to preserve, even when venturing into new ground, or if it could be set aside. Skill trees, for example, fit well with the roguelike elements, but a "linear, beat by beat narrative" did not.

As for what they'd add, inspiration came from a game jam the company held after Prey. The team got to try building whatever they liked into Prey, including fleshing out the basketball game, adding a dance party, and several ideas that ended up working well enough that they were added to Mooncrash wholesale. The ability to have a pet mimic, and the tentacle grenades, both came from this jam.

But Mooncrash ended up being something far more complex and ambitious than a few fun tricks with no linear plot. I can't go much further without just telling you how Mooncrash works, and there's enough to it that even I had forgotten some of the particulars. It's set in a simulation of a moon base, and you play a series of unique characters in turn, all of whom are trying to escape. Play as the psionic-empowered Test Subject to fight your way to an escape pod, and whether you manage that or die, now you might start as the Security Chief, with the same enemies dead and the same doors unlocked. It's only when you lose (or escape!) all your characters that the simulation resets, and you can try all over again.

That's the roguelike part. There's no saving or loading, characters who die stay dead, and the game is short to complete if you manage it, but designed to be replayed many times. In particular, you're trying to check off a long list of objectives, the most ambitious of which is to get all 5 characters to escape in one run, without resetting the simulation.

This is extremely different from the vibe of Prey, which was all one enormously long playthrough as the same character, correcting yourself along the way with saving and loading. But the shorter, looping structure actually makes a lot of sense for an immersive sim type environment, for reasons that Rich will now explain with pictures of dollar bills.

Broadly, making good quality 'stuff' the player experiences costs money - and time, and people, and work, they're all linked. In a linear action game, the player is going to see nearly all of what you made, since all players take the same path. 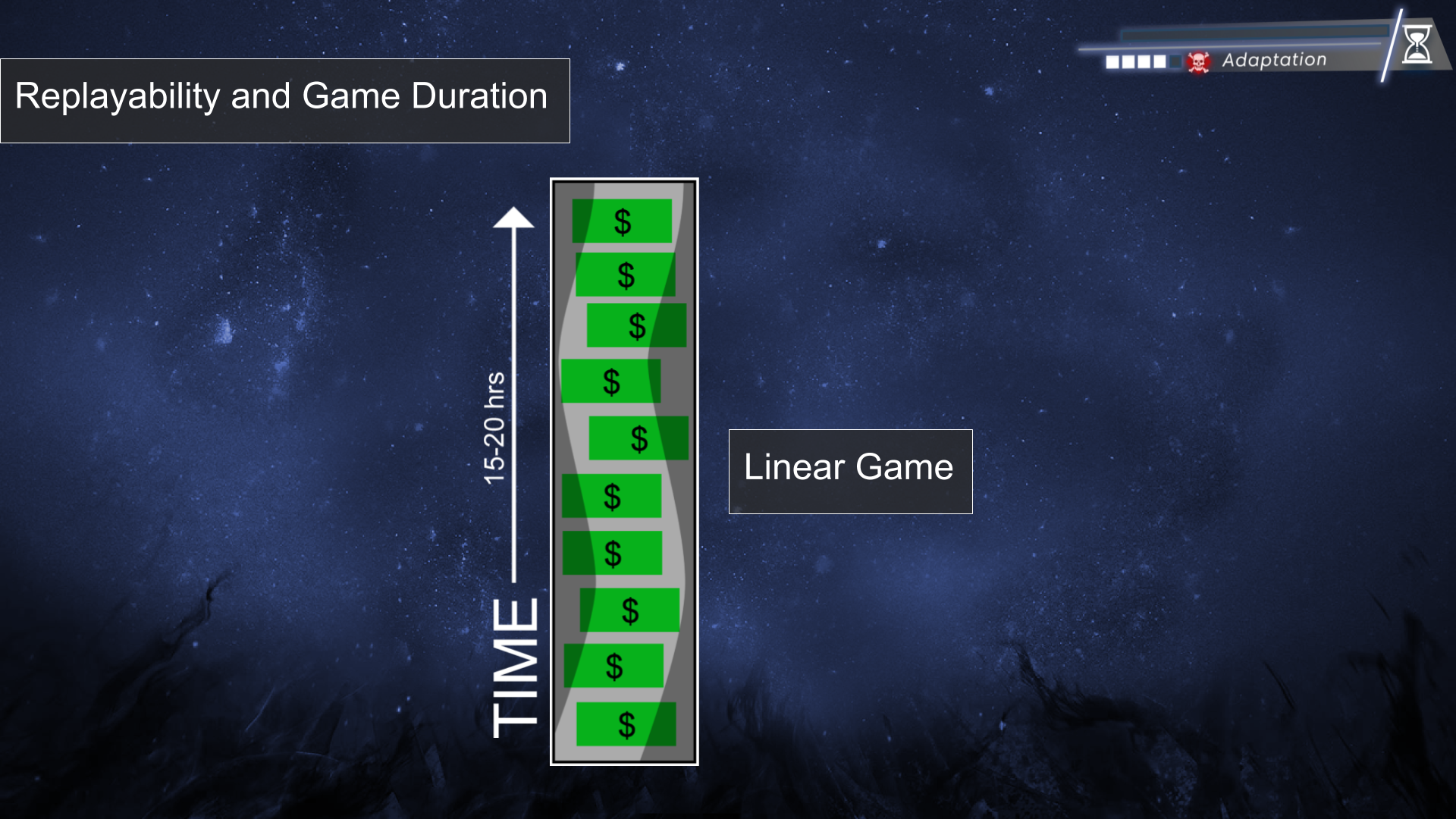 In a more open ended game like Prey, where there's a wide spectrum of paths from the start to the end, you have to make more stuff total, and most players miss most of it. That makes these games very expensive buck-wise for the apparent bang the player gets. Rich stresses he still believes in this way of doing things, that it has a value to the player beyond this kind of maths, but it's obviously worth exploring other structures. 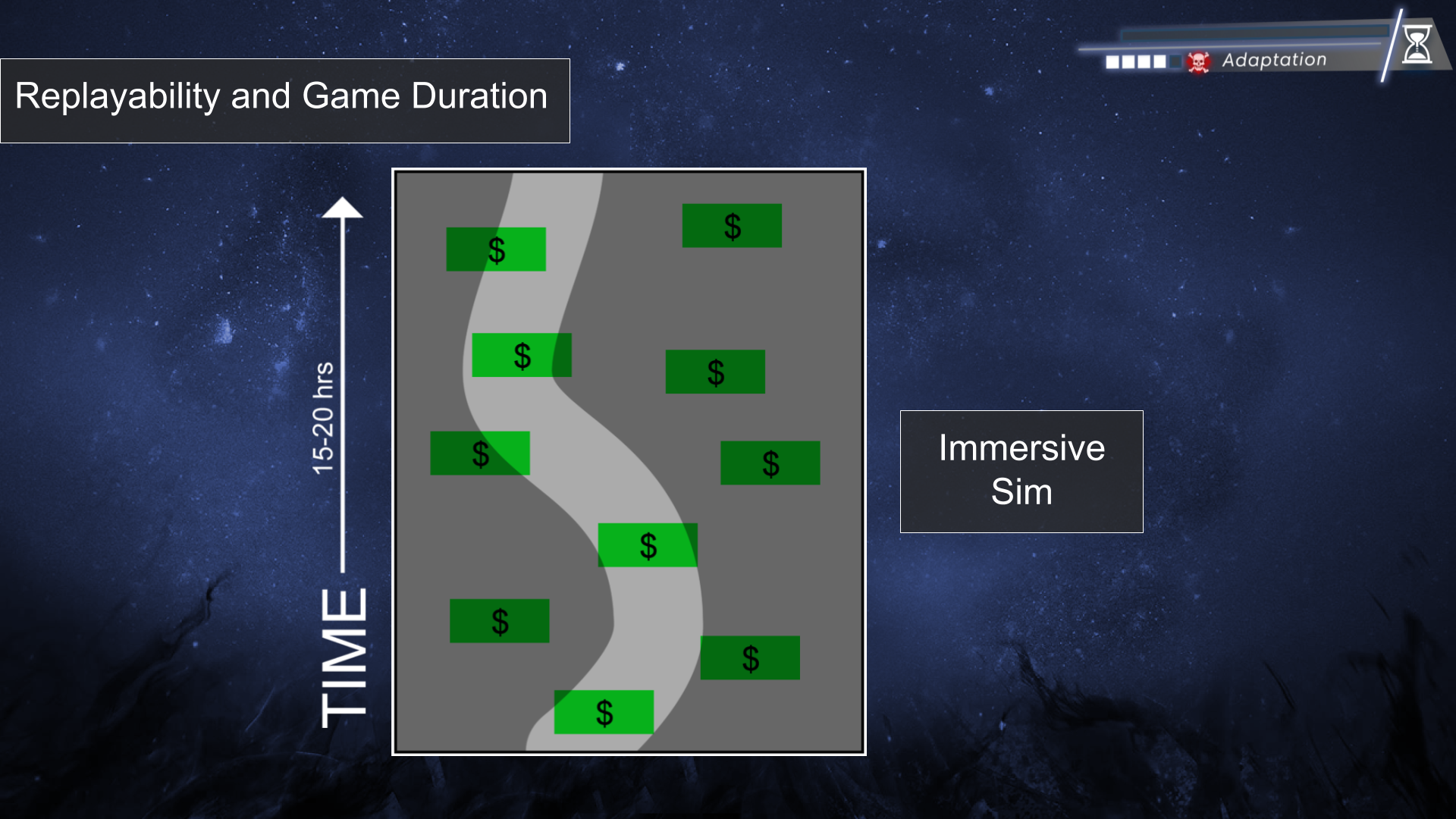 If you want more of your work to be seen and enjoyed, and you don't want to go linear, you can make a shorter game designed to be played many times. Multiple playthroughs will naturally discover a bit more of the breadth of what's possible, but Mooncrash also does some neat things to push you not to repeat the same route each time. 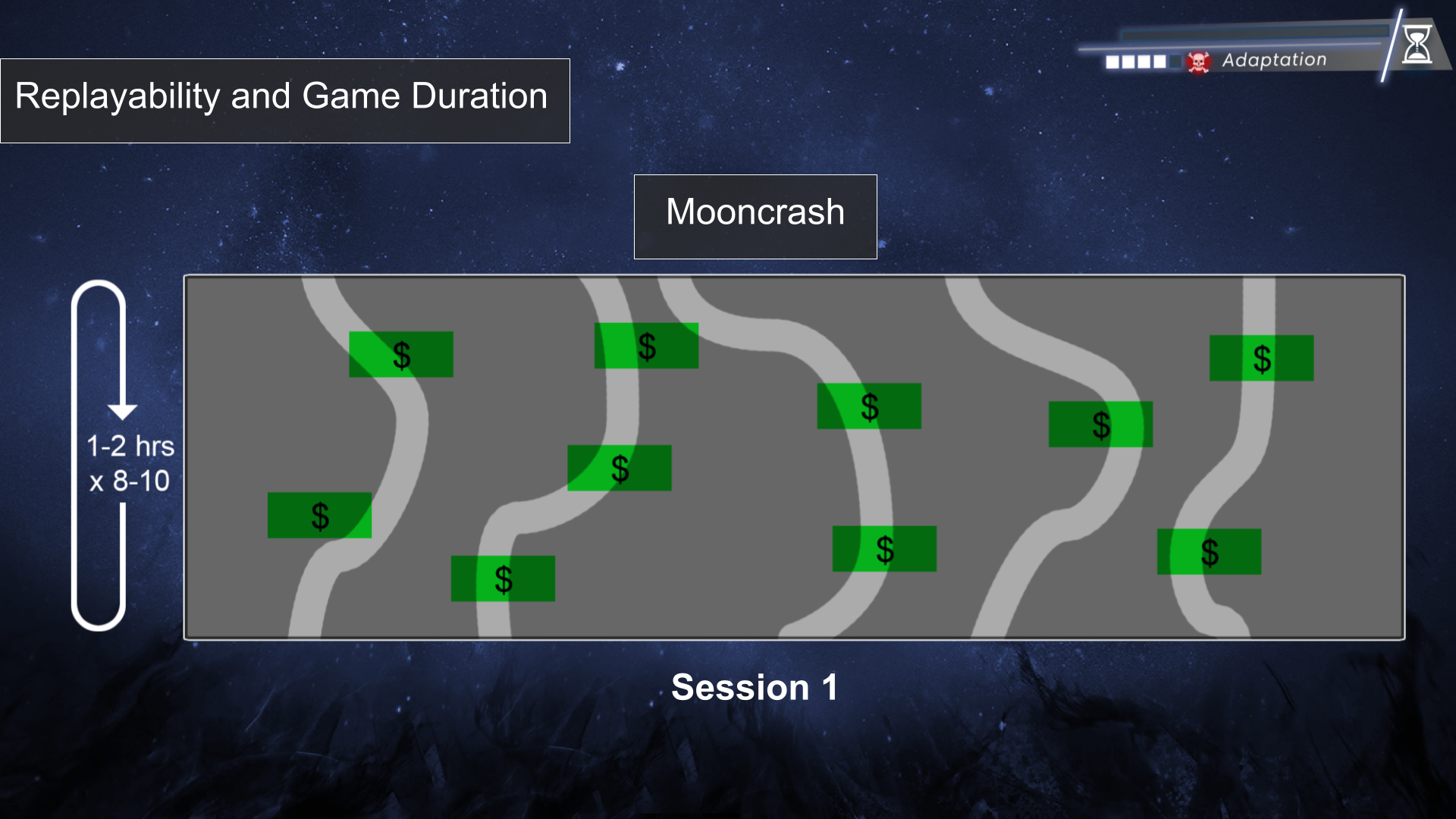 For one thing, starting as a different character each time you die or win inherently changes how you'll play: they each have different skill trees and starting kit, and their different themes and backstories prompt you to try playstyles you might not otherwise. I don't think I ever put points into the security skill tree in Prey, which makes you better with guns and able to slow time. But when you tell me I'm playing as the Security Chief, and that's one of only a few upgrade paths available to him, of course I try it -- and have fun.

For another, your runs as each character don't even start in the same place. When you finish as one character in Mooncrash, the next one you play begins elsewhere in the same level. That both saves a level loading time, and varies the starting location for each life without leaving the player disoriented.

Even with variable starting locations, the same chunk of environment could get repetitive over multiple lives. So each time Mooncrash resets, it also randomly adds hazards to various bits of the levels. A whole staircase might be collapsed and on fire, forcing you to either fix that with tools like the Gloo gun, or find another route. Other hazards leave an area flooded with electrified water, deprived of oxygen, cut off from the power system, or flooded with radiation. Some combinations of these can even stack.

I'm mixed on whether that system worked. I certainly wasn't bored of over-familiar corridors, so that's a win, but I also didn't find myself pushed to find interesting solutions or meaningfully vary my approach. The ways I navigated these hazards were basically the same ones I'd been using in 40 hours of Prey, so they didn't provide the same kind of variety that, for example, Spelunky's level generator does. where slight rearrangements of the same elements create interestingly new challenges each time. That's a high standard to hold this system to, but I think it points to where a roguelike immersive sim could go next.

The most controversial roguelike element Mooncrash adopts is time pressure. The longer you spend in one run of the simulation, even across multiple character lives within it, the more dangerous enemies spawn. The original Rogue itself pushed you forwards with hunger: you needed food to live. Spelunky chases you with a ghost. Roguelikes want to push you to move forward instead of letting you scour the levels for everything of value. "But- !" a legion of immersive sim fans cry, gesturing frantically at 80% of their play time in Prey and Deus Ex. Yep. Rich acknowledges this system rubbed some people the wrong way, and in the time they had they didn't manage to find a sweet spot that worked for everyone.

All the same, Rich says Mooncrash is one of the most engaging projects he's worked on in his career. And he ended with a nice line that gets at why I'm so glad Mooncrash exists:

"Immersive sims are not dead, but the monolithic vent-crawler is no longer the only expression of that system."