As I've mentioned before, one of my absolute favourite things to do in videogames is to hang around in The Witcher 3 [official site]'s remarkable countryside, revelling in the gorgeous flora and marvelling at the none-more-atmospheric weather effects.

So news of a mod that specifically makes The Witcher 3's grass and grass alone even prettier makes me sit up and pay attention in a way that almost no other graphics tweak could. The greatest great outdoors, now even greater.

Beautiful Grass, by one 'Boostin4kix' (and aren't we all, really?) is a mere 5 Kilobytes in size, and specifically tarts up the grass in the White Orchard, Velen, and Skellige areas of the game. In tandem with the mod itself, you need to get you hands a little dirty and edit ini files to up the number of blades shown at once, and the rendering distance thereof.

The net effect: SHITLOADS OF GRASS. But not simply more grass - more detail, more varieties of species, more seeds, more variations in height. More organic, believable meadows, basically - and Witcher 3 already had best-in-class meadows, as far as I was concerned. 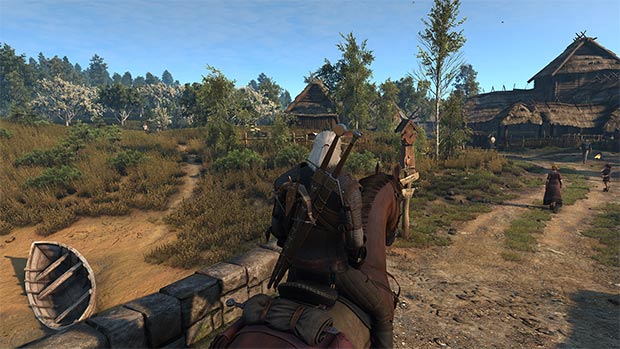 Please note that this isn't the only Witcher 3 grass mod in town, and sometimes it's not quite a perfect improvement either - in some places, the grass is all the same height, for instance something the creator says he's working on. But it's some real nice grass alright, in a game that at least 50% of the reason for playing is the vegetation, so it's good enough for me.

To install, download the mod from here and extract the contents to your Witcher 3 mods folder. Then, browse to My Documents - The Witcher 3 and open up user.settings in Notepad. Find the below lines, and change the values to the following:

This is likely to cause a big performance hit if you haven't got a pretty beefy graphics card, so you could try the following if the framerate is intolerable. Still a decent visual improvement, but only half the GPU toll.