The fight to become the best panda in videogames is the smallest, fluffiest battle royale. Until last week, there were two serious contenders. The Just Dance panda was the bookies favourite, for clear reasons. And the panda who became last year’s Tekken World Champion is the other (don’t @ me). But now we have a third competitor.

Contra: Rogue Corps is a new twin-stick co-op shooter from Konami. Up to four players go blasting aliens amid the ruins of a place called the Damned City. This would not normally excite me. The old Contra games are ancient and difficult. The twin-stick shooter is one of my least favourite genres. But there is one thing I can appreciate about this new shmup. It features a panda with a minigun.

The panda’s name is “Hungry Beast”. Here is the description sent to us in a recent press release:

Hungry Beast – Once the noted (human) scientist Kurt Steiner, he had his brain inserted into a giant cyborg panda and now spends most of his time looking for delicious snacks.

That is stupid and I enjoy it. He is not the only bulletperson in the game with a smirking backstory. There is an assassin whose belly contains an annoying alien, which she can only silence by stabbing a sword into its mouth. There is a cross-eyed soldier whose arm is a giant drill, and a man-sized alien grub called “Gentleman” who “feels the rest of the team are ill-mannered and vulgar, especially the Panda.” 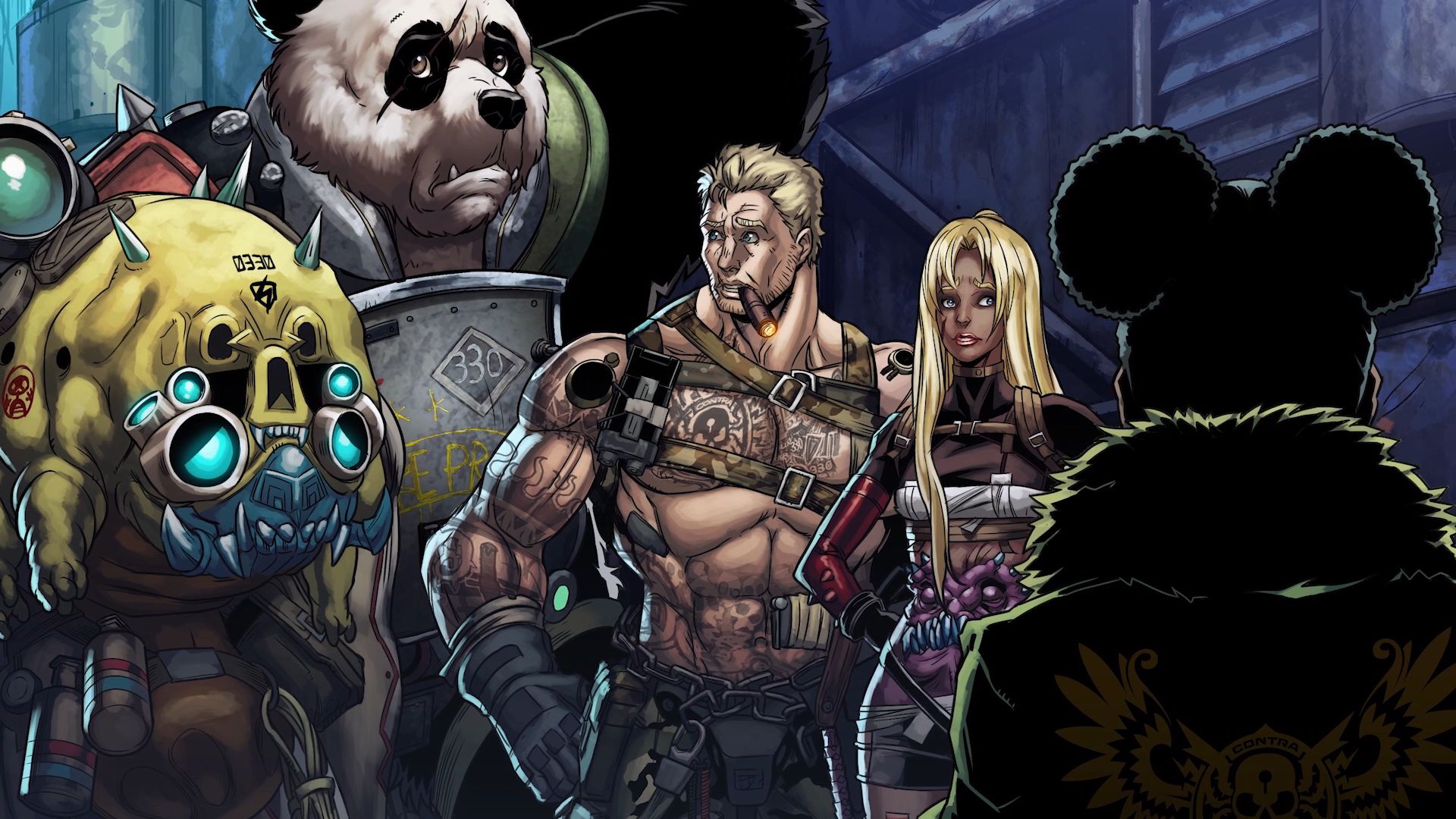 They’re all scavengers in the Damned City, a settlement with such a distressing atmosphere it turns people into unhealthy zombaliens even if they just hang out there. A sort of psychic Chernobyl. I got a chance to shoot some of these fleshy baddies in a demo at E3 last week, and it was mostly an uncomplicated bullet trudge through an urban wasteland, fighting turrets and mutants.

Your characters can dash through enemies, they can find bomb pick-ups that unleash damaging megasplosions, they can fire special attacks, and perform finishing moves on stunned baddies. It's not exactly the side-scrolling platform shmupping of the Contra series thus far, but as genre transplants go a twin-stick bulletfield is probably the right recipient. 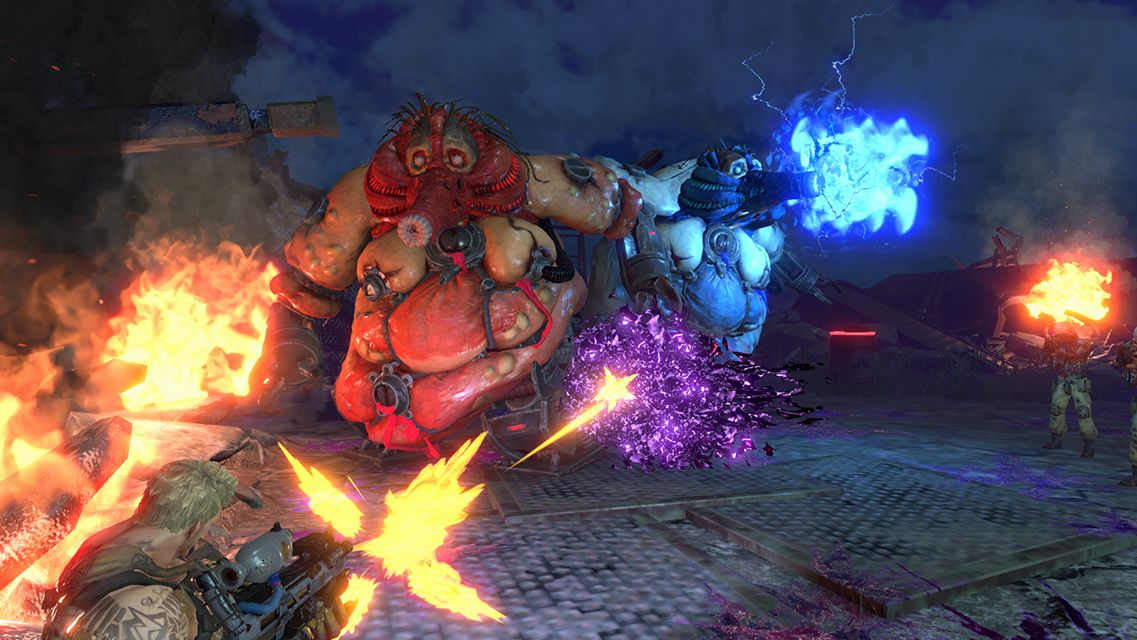 It's also going for a particular angle of batshittery. Sometimes when you blow up a mutant it will be flung into the air and splat against the camera, like a flayed and brutalised Wile E Coyote. Your special attacks are powerful and dumb. The drill-fisted army man can fire a wide-spreading hose of gunshots, for example. While the panda gets to place three smaller pandas on the ground, who shoot in neat uniform lines, just like real pandas do in the wild. The first mission ends with you rescuing a hostage. Then a casket of toxic sludge accidentally shatters above the hostage, and he is promptly melted. 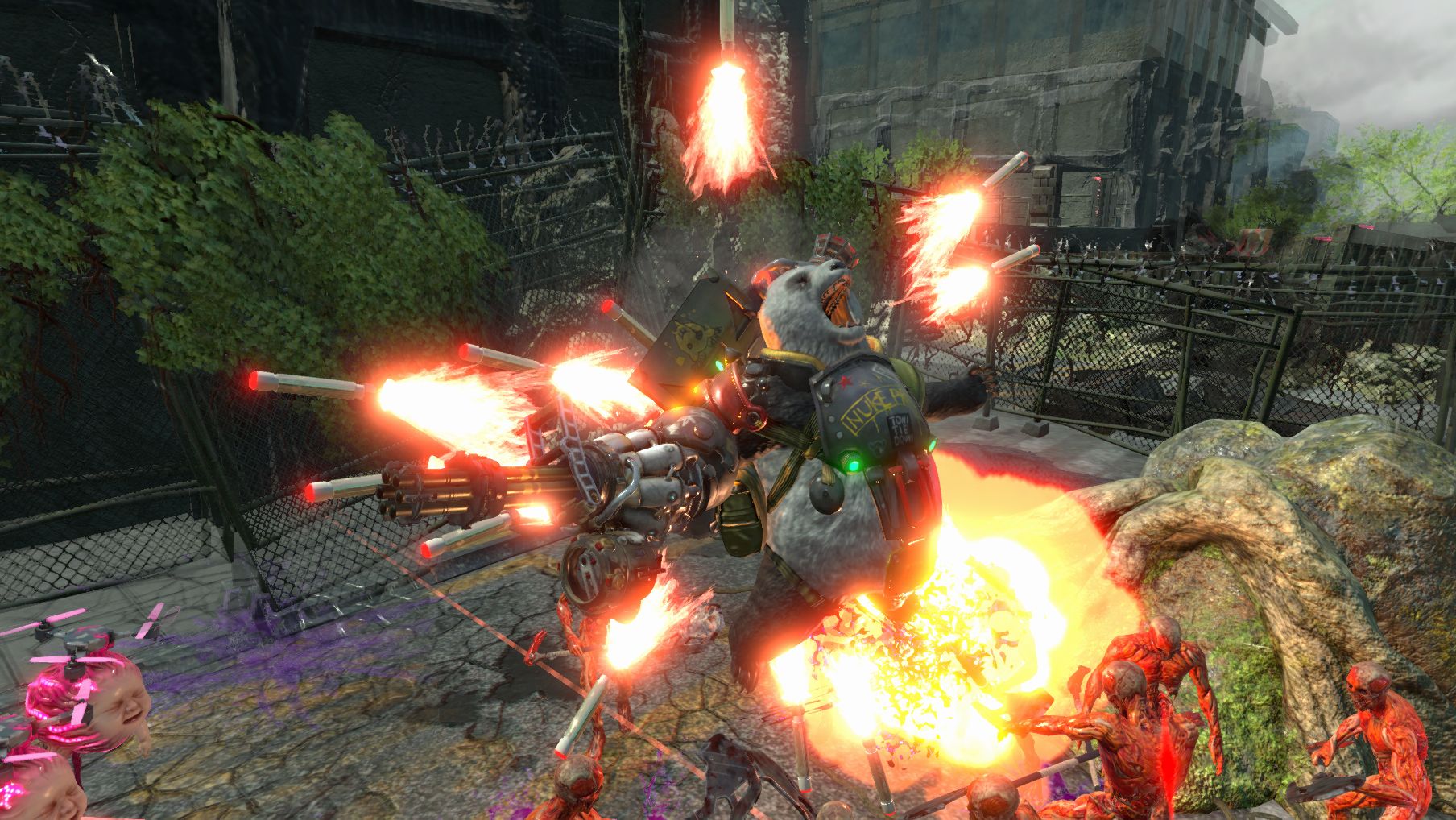 Between levels you get to hang out in a base, where you can swap and customise your warpeeps. One screen allows you to perform surgery on your heroes, and lists their body parts. “Normal eyes” says one square on the menu. “Normal organs” says another. The suggestion is that you can replace these with cyborg organs or other improvements, then sell your “normal brain” in the headquarters shop, but I’d be surprised if anybody paid you for it mate. 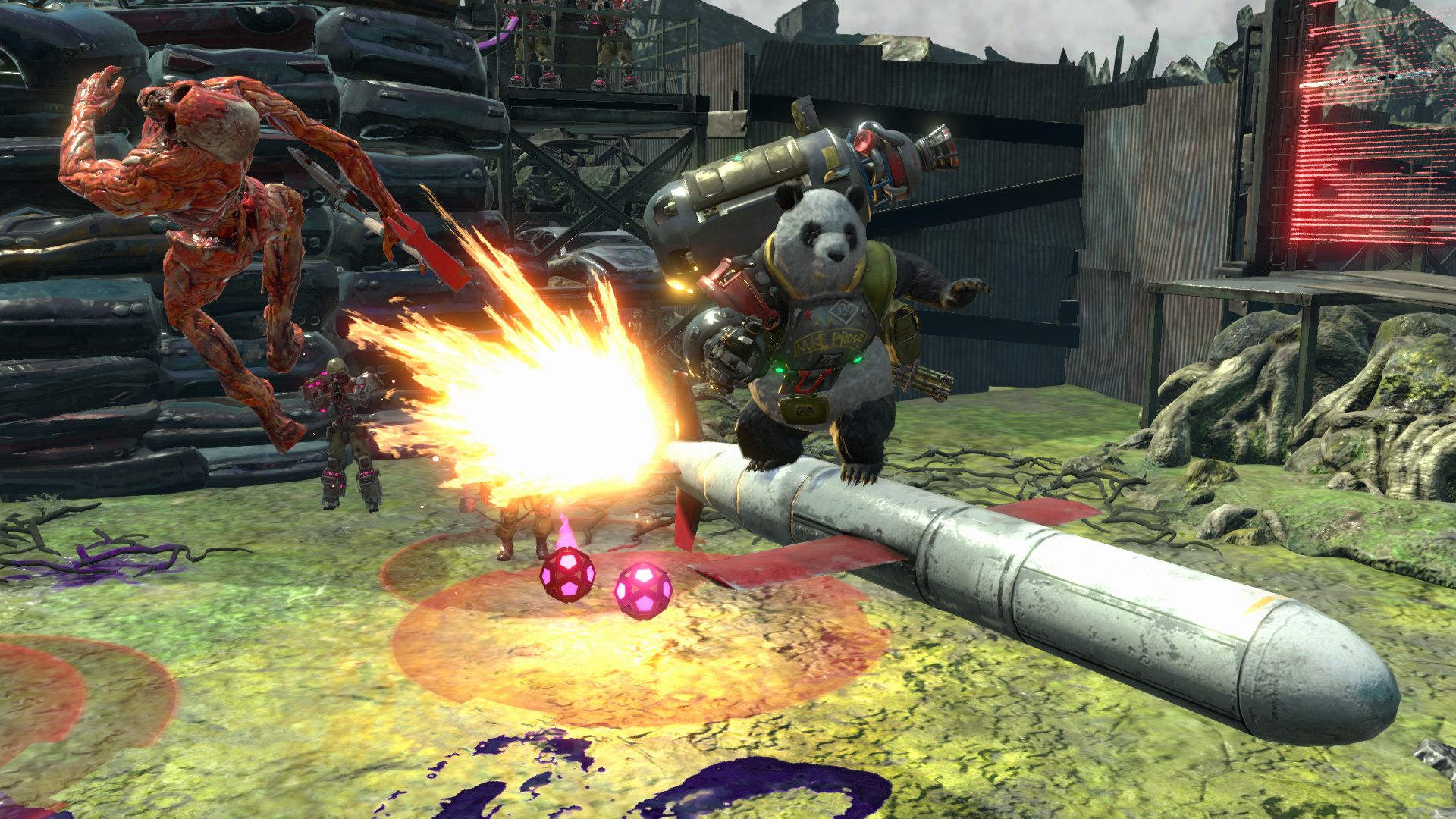 Anyway, the whole thing feels silly, explodey, and conventional. I didn’t get to play co-op, which is where the idle Sunday afternoon goodtimes will likely ooze forth for its players (it includes local co-op on top of accommodating online pally wals). But based on my short singleplayer frolic, it feels a lot like buddy-based blast ‘em up Helldivers, the game which came closest to making me forget that the twin-stick shooter genre is largely an uninspired bog (I told you not to @ me). And with characters this daft, it at least understands its own place in the grand scheme of gamey media. At one point the panda picks up a tank by the bombnozzle and hurls it into a wall, a move I would later see performed by an unfamiliar Hulk in a demo for Marvel’s Avengers.

I know which hero I prefer.