Star Wars: Squadrons has arrived! Are you excited? I'm excited. Are you terrible at the game right now? I was too when I first started. But no longer, thanks to these top Star Wars: Squadrons tips for beginners, which will walk you through everything you need to know about this high-skill-ceiling space combat sim, from power management to advanced movement techniques and much more.

Star Wars: Squadrons is a challenging game with an extremely high skill ceiling. Strangely, it reminds me of Rocket League: you're trying to learn the capabilities and limitations of a fiddly and confusing vehicle, so you can learn to pull off incredible moves instead of just constantly exploding. But with the below practical top-tier tips, you'll sidestep the early pitfalls currently plaguing most beginners in Squadrons, and skip right ahead to the "incredible moves" part. Speaking of skipping right ahead...

Squadrons can be played both singleplayer and multiplayer, and I'd highly recommend you curb your enthusiasm for the intense PvP dogfights, and work through some of the singleplayer content first. The first few missions of the campaign act as an extended tutorial, teaching you the controls, advanced techniques, and capabilities of each ship. All vital information you'd be lost without.

And there are more ways to practice than just the campaign. You've also got a training ground where you can fly around, practice moves, summon AI allies and enemies to engage with, and even an obstacle course to help you get to grips with ship handling. Even after all that, it might be a good idea to try out a Fleet Battle against AI before heading into multiplayer and ranked. Otherwise you might be in for a rude awakening.

Never come to a complete stop

Most newcomers to Squadrons will regularly bring their ship to a complete stop in space while they turn. This is a huge mistake, because it makes you the easiest target in the world for any enemy to come along and blow you up. Teach yourself to never bring your speed down to zero. Instead, make use of the next tip to maintain speed while turning.

Maximise mobility with Boost Drifting and the Sweet Spot

Boost Drifting is an extremely potent early skill to learn in Squadrons, and will enable you to conserve velocity while you turn. To Boost Drift, you need to Boost (which is only possible if you've converted power to engines), then hold down the Boost button again while turning. This will allow you to drift and sharply redirect your ship. For full details check out our guide on How to Drift in Star Wars: Squadrons.

Hand-in-hand with this skill is mastery of the Sweet Spot, which is the section in the middle of your speed gauge that sticks out a little more than the rest on your HUD. While your speed is within this sticky-out block, your ship will have much better handling and can turn on a dime, giving you an edge whether you're tailing an enemy or shaking a tail of your own.

Capital Ships are the primary objective of each team in Fleet Battles, the main mode of Squadrons. Your eventual aim is to destroy the enemy Capital Ship - a fact which prompts many beginners to fly slow around the enemy CC so that they have as much time as possible to damage it. This is a huge mistake, because a Capital Ship can obliterate you unless you keep your ship at a high speed while going on these blaster/bombing runs. Preserve your speed, and your life, and don't underestimate those Capital Ships. 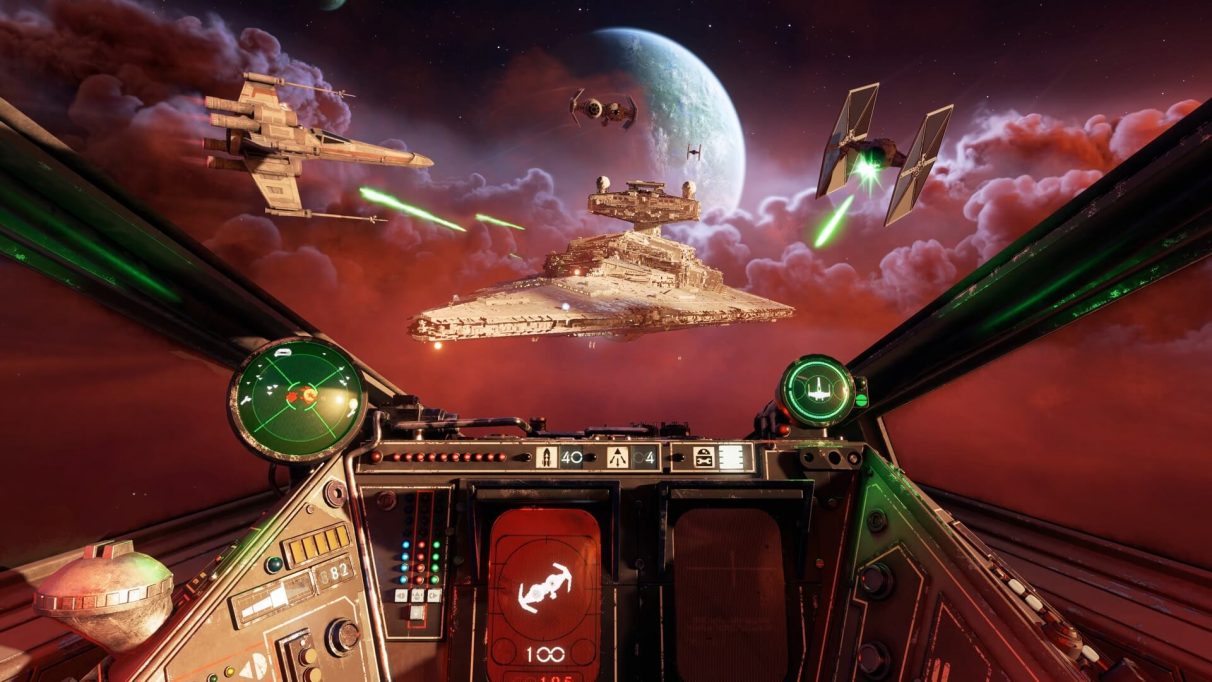 Deploy countermeasures as late as possible

Deploying countermeasures can save your life if a missile is locked onto you - but one thing most beginners don't realise immediately is that the time you decide to deploy countermeasures is very important. Too late, and the missile will explode on you, dealing massive damage. Too early, and the countermeasures won't even reach the missile - and you'll have spent your one defence on nothing.

Pay attention to the little UI element that appears when a missile is locked onto you, with the arrows pointing inwards. Only when the innermost arrows light up should you deploy your countermeasures.

There are four different ship classes in Squadrons, and of each class there are two ships - one for the Republic and one for the Empire. All eight ships work quite differently in almost every way. Not only are their basic stats such as health and mobility completely unique, but the ship components available to them and even their cockpit layouts differ from one another. Even if you find yourself an early favourite ship type, it's best to spend time in every cockpit so you can learn the strengths and weaknesses of your allies and enemies.

Pay attention to your team composition

Hand-in-hand with the previous tip: your team composition is important, particularly in Fleet Battles. Every team should have a support-class ship. Depending on the phase of the battle (whether you're fighting enemies or the Capital Ship primarily) you might want more bomber-class ships. Tie Fighters and X-wings may be versatile, but that doesn't mean the whole team should use only those ships. This is a team game. If you want to succeed, you should look at your team composition and figure out what you're missing.

Use pings and the targeting wheel

Yes, there's a ping system in Star Wars: Squadrons. With your reticule over any ally, enemy, or other target, you can tap the Ping button to highlight that target for your team. Other members of your team can then respond with pings of their own to communicate tactics and ideas.

The targeting system is another essential aspect of your HUD. Most players who play the first mission of the campaign will know to tap the target button to target a particular enemy, and that you're able to cycle through different possible targets. But it's also important to know that you can hold the button to bring up the Targeting Wheel, allowing you to change your ship's definition of a "target". Do you want to target only friendly ships? That would be very useful if you're playing as a support-class ship. Do you want to target your last known attacker? Great for getting revenge. You get the idea. 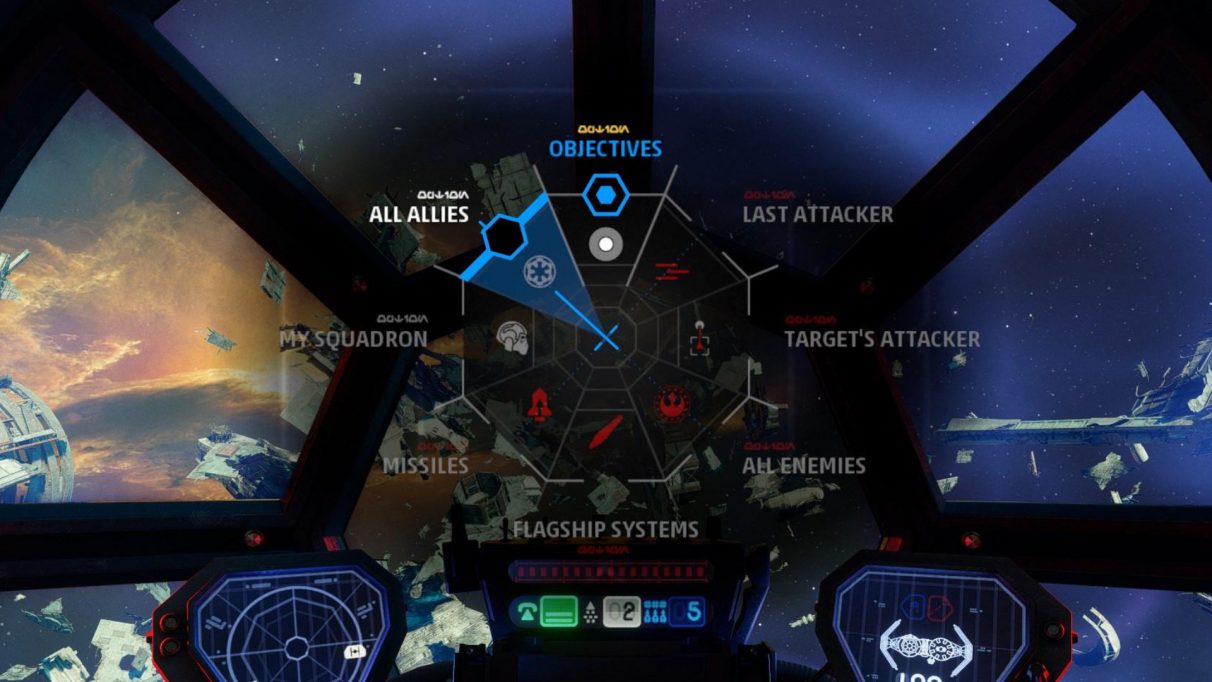 Power Management is an essential skill

Power management is the next big aspect of Star Wars: Squadrons to master after "how to fly around". On an Xbox controller you can use the D-Pad to divert power to weapons (faster weapon recharging), engines (mobility and Boost) or in the case of certain ships, shields (faster shield recharging). You can also divert power to certain systems (depending on your ship) by holding down the "X" button on your controller. For some ships you can divert power to engines (to enable Boost) or weapons (to enable more powerful blasters); other ships are able to divert shields to the front or back.

In the game settings you can also set the power management mode to "Advanced", which allows you to change your power ratios by increments instead of just maximising or equalising across all systems.

Because everyone is confined to their cockpit, it can be hard for a player to have as great a situational awareness as they might have in other games. Which means the opportunities for third-partying (butting in on a 1v1 fight for your own or your team's benefit) are extremely high. Keep an eye out for allies being tailed, and flank or tail the enemy for an easy kill.

Prioritise survival over getting kills

In both Dogfight and Fleet Battles, your survival is more important than getting kills or dealing damage. A death in Dogfight loses a life for your team, which directly contributes to the outcome of the battle; and a death in Fleet Battles will give your whole team a morale penalty, which can swing the tide in the enemy's favour. The best pilots are not gung-ho explosion-chasers, they are the slippery ones that never seem to die. Survival, above all else.

Pay attention to your killcam

One of the best tips I found early on was to study exactly how you died by watching the killcam of the enemy that slew you. This is your one chance to view your own actions from a perspective other than your cockpit, and it will show you exactly what you did wrong and how you came to be destroyed. It's an extremely potent learning tool which you should take advantage of at every opportunity.

And that's everything we've got for the time being on Star Wars: Squadrons - but stay tuned for more tips and guides on every aspect of this fantastic and challenging space combat sim as we all play and learn more about the game. Or, if Squadrons isn't quite your cup of tea, why not check out RPS's list of the best Star Wars games on PC?