When I was a kid I was really, really into The Sims. The first one came out around the same time that my big brother went to university, which meant I got to move into his room – the big room, which had the computer in it. I stayed up way past my bedtime making versions of the adult my 11-year-old self wished to be (a willowy, elegant type with red hair). I played with the lights off so that if I heard mum coming up the stairs I could turn the big CRT monitor off and leap back into bed, and trick her into thinking I’d been asleep the whole time. This did not work, because the tower made a noise like a helicopter taking off, but still.

It was a phenomenon that gripped most of my school that year. I remember clearly that I was told the ‘motherlode’ and ‘rosebud’ money cheats by a maths teacher. This continued well into The Sims 2 a few years later, which had some of the best expansion packs and build options. But The Sims 3 just… lost me, and by the time The Sims 4 came around, I’d forgotten what I loved about the series. Until the Tiny Living Stuff Pack was announced.

It all looked so cosy and lovely that I was moved to buy The Sims 4 just so I could build a teeny little witch’s cottage when Tiny Living came out. Except VidBud Alice L. told me Graham had expressed exactly the same interest, so I instantly and very aggressively challenged G-Star to a Tiny Build-Off.

Then, because I had put myself in a position where failure was not an option, I spent the week watching Sims 4 building tutorials and speed builds (shout out to James Turner) and all of Alice L’s Sims videos about custom content and the best packs.

Then I spent the whole weekend practising building, using the moveobjects cheat and the one to reveal items, and resizing, and all that kind of stuff. I was pretty proud of my first go at a cottage, which was quite small even without any Tiny Living additions. 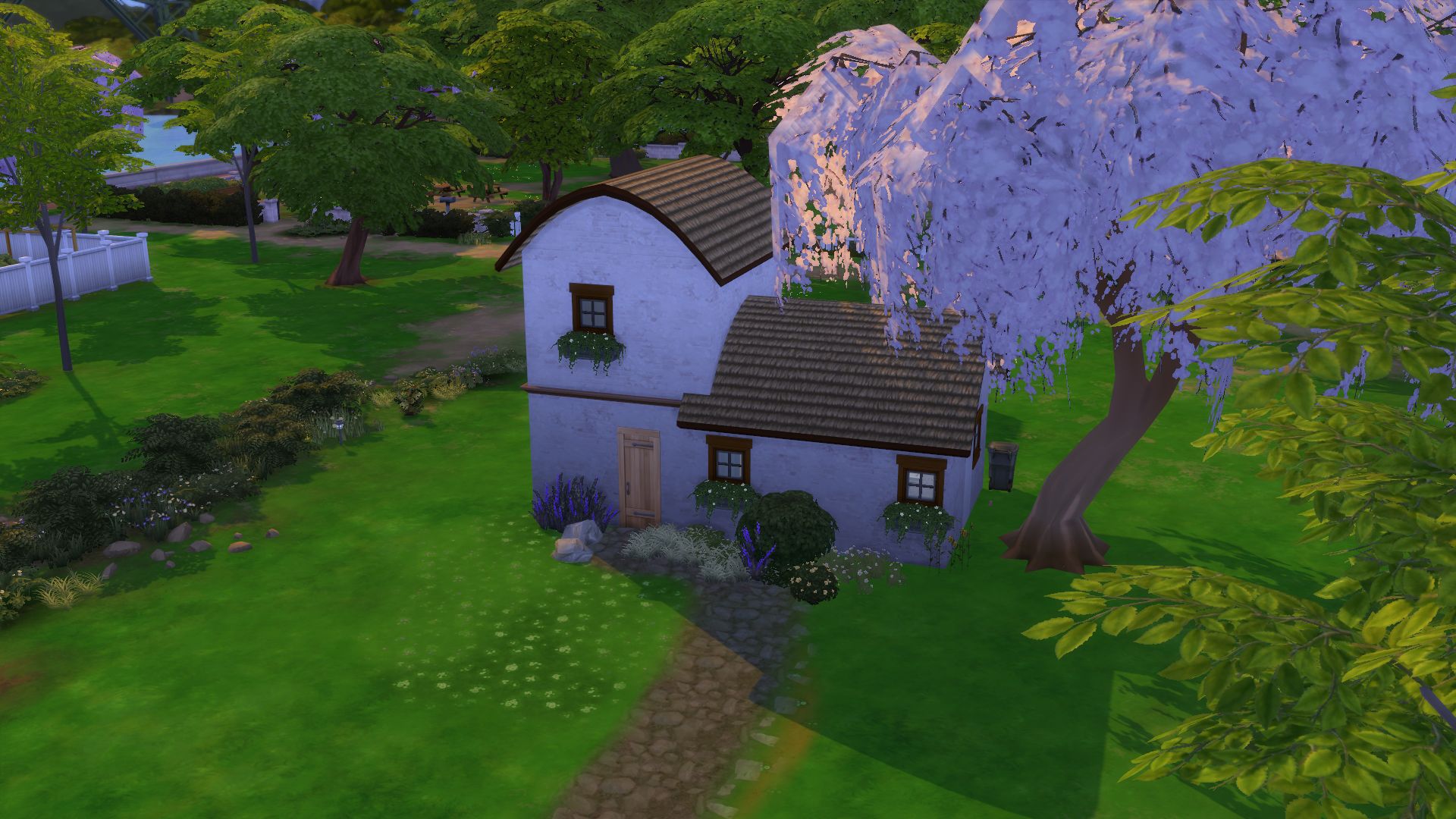 The outside is the worst bit

I excitedly texted some pictures to Alice L.. “That’s so cute,” she replied. Sims Mum liked it! She might even put it on the fridge! 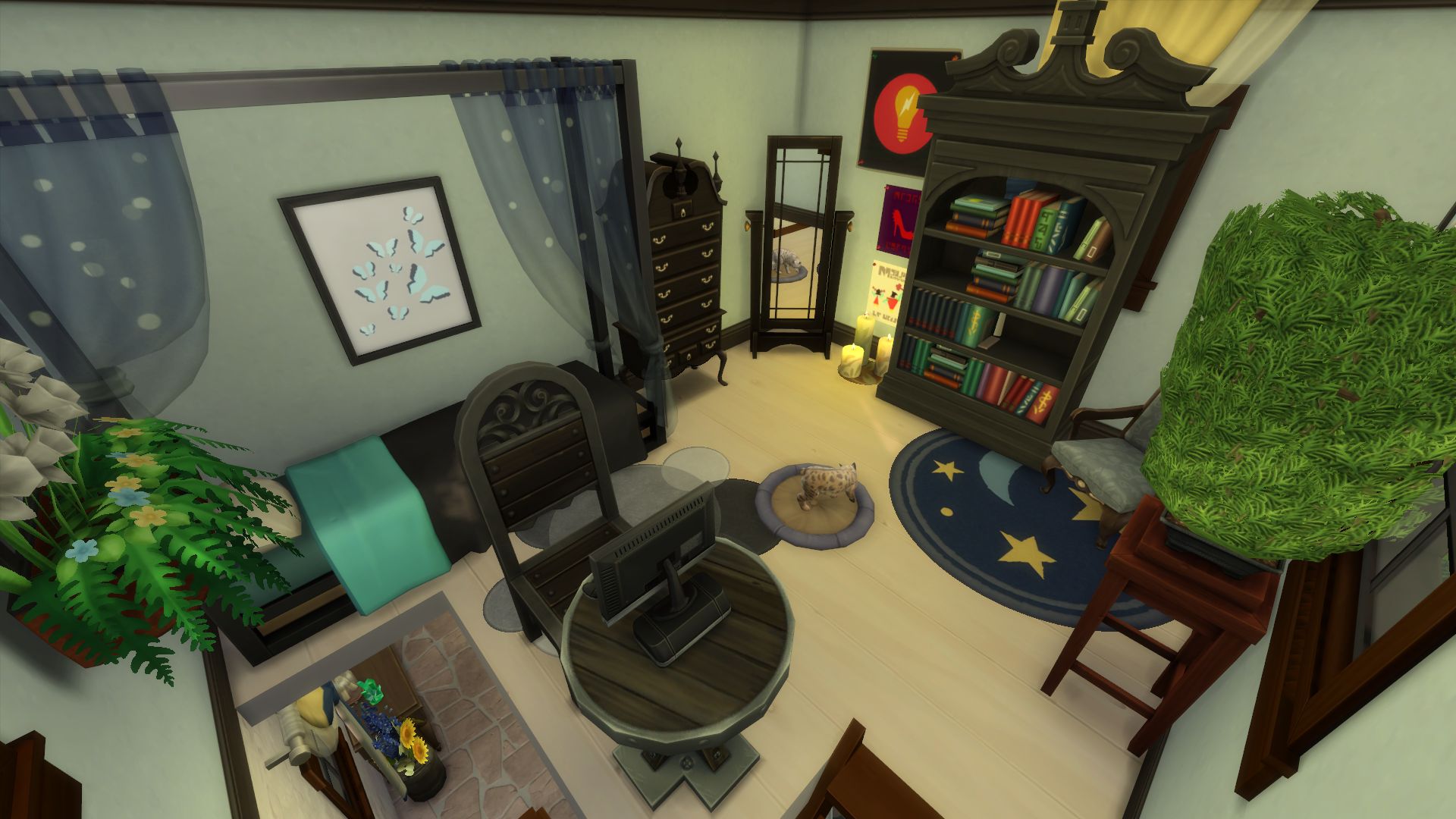 The bedroom, plus stupid cat

Because I am me, and despite saying all the time that I don’t get what people see in all these competitive sports, I also texted Graham some trash talk. 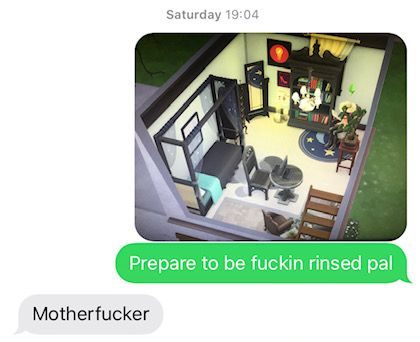 The side effect of my need to utterly destroy Graham at imaginary building is that now I just really like building in The Sims 4. I am fighting the desire to get the Island Living expansion, and all the previous Stuff packs, because I want to experiment with more items – especially plants – but also part of me is like, “that’s how they get yer, Alice. They lure you in with the base game for a tenner, next minute you’ve spent 200 quid on some, fuckin’, fancy ferns and a new kind of side table!” So I am making cautious explorations into CC, aka custom content.

I am getting obsessed with the specific tolerances for how far you can clip an item into another item and them both still be usable. I got a cat and right now its food bowl has to be outside because it cant fit under the wooden frame stairs and still be usable by the actual stupid cat (which is called Bubblegum). But I’m going to find a way. Everything will fit inside the house.

The important thing is that I’m pretty sure Graham has no idea how to do any of this. 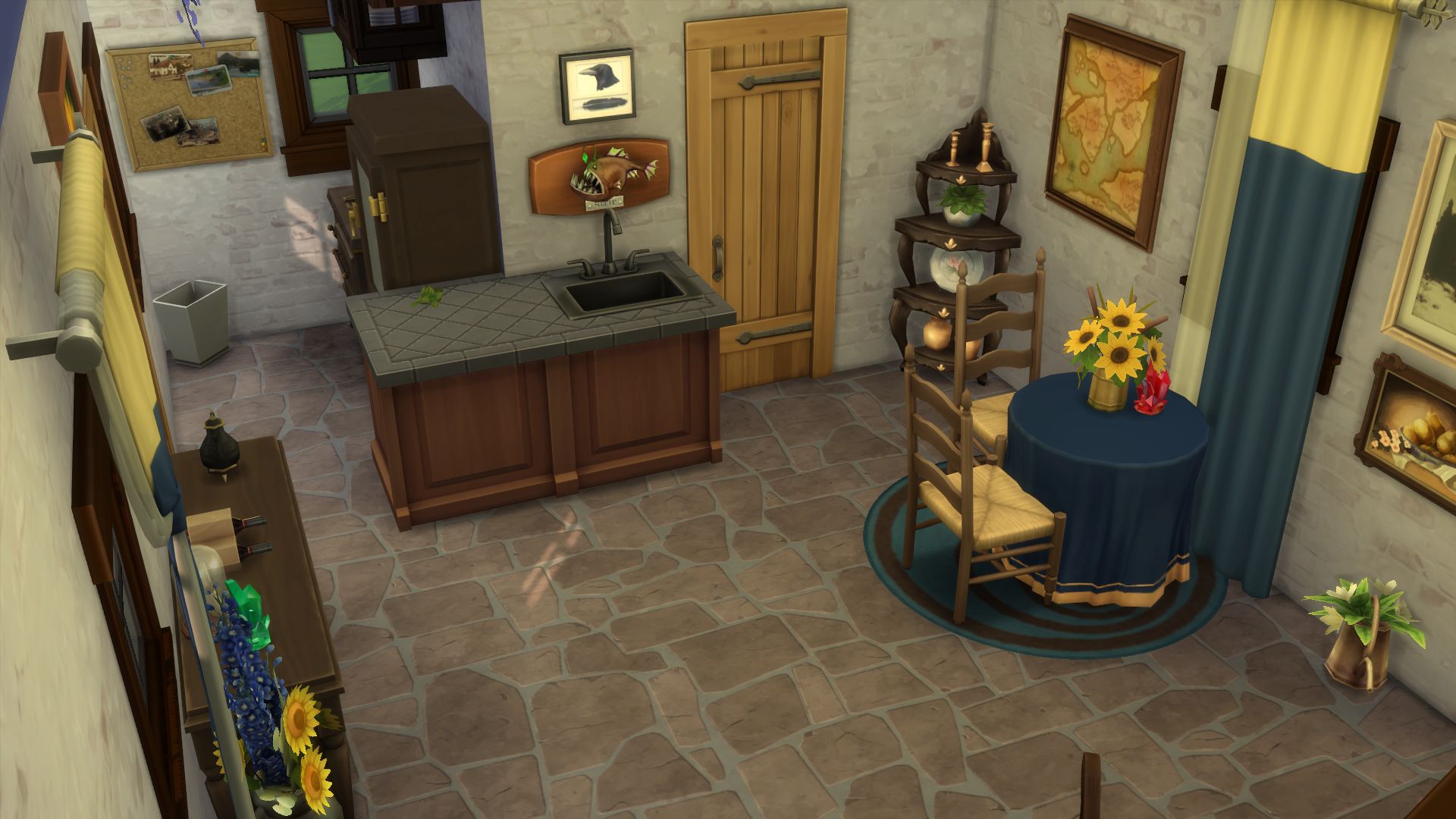 View of the kitchen/dining area from the stairs. Unhappy about those island counters, but I haven’t yet been able to place regular counters that the Sim can still use to complete meal prep.

I hope you like articles about new bookshelves and knitwear, motherfuckers.