The Acer Predator Triton 500 is probably the first gaming laptop I've tested where I've almost completely forgotten it's a gaming laptop. Sure, the keyboard's RGB backlight is a bit of a giveaway, as is the blue LED Predator logo on the back of the display, but this is by far one of the quietest gaming laptops I've had on my desk in quite some time. It's by no means completely silent, of course - its fans still kick up a bit of fuss when playing games - but it never got to the point where I felt the need to plug in a pair of headphones or fiddle about with its various cooling profiles. If my Dell XPS 15 gave up the ghost tomorrow, I'd seriously consider making this my next laptop.

It's expensive, costing £1799 in the UK at time of writing and $2000 in the US (albeit with a new 9th Gen Intel Coffee Lake processor instead of the 8th Gen Core i7-8750H in my particular sample), but Acer's Predator Triton 500 ticks a lot of boxes for me. It's powerful, sure, coming equipped with that aforementioned Core i7 CPU, an Nvidia GeForce RTX 2070 Max-Q graphics chip, 16GB of RAM and a 512GB NVMe SSD, but crucially it's not too bulky or indeed shoulder-cripplingly heavy, weighing approximately 2kg and measuring just 17.9mm thick. That's only 200g more and 1mm bigger than my XPS 15, which for me at least is a worthwhile trade-off considering the upgrade you're getting in the old gaming department.

Nvidia's energy-efficient RTX 2070 Max-Q chip is a great match for this laptop, as it's not only able to hit a smooth 60fps on max settings in a lot of today's biggest games, but knock the settings down to High and you'll start making use of the display's 144Hz refresh rate, too - which is a refreshing change after the number of high refresh rate laptops I've tested that aren't able to do this unless you start dropping the quality down even further.

Take Monster Hunter: World, for example. On Highest, I managed an average of 58fps on Highest at 1080p as I sauntered around the game's Ancient Forest, which rose to an average of 83fps when I ran through the same sequence again on High. It is, admittedly, not quite as nippy as the RTX 2070 Max-Q equipped Asus ROG Strix Scar II or Asus ROG Zephyrus S, with each laptop squeezing out just a couple of extra frames on both settings, but they also sounded like they were about to launch into space at any given moment. The Triton 500, on the other hand, was barely audible above the sound of the battle music.

It was a similar picture over in Total War: Three Kingdoms and Shadow of the Tomb Raider, too. In Total War, the Triton 500 managed an average of 58fps on Ultra in the game's internal benchmark, while High produced an even smoother 74fps. Shadow of the Tomb Raider, meanwhile, was even smoother, producing an average of 62fps on Highest with its top SMAAx4 anti-aliasing option enabled as I wandered around the busy festival of Cozumel's Day of the Dead festival, and an average of 86fps when I dropped its anti-aliasing down to just regular SMAA.

Forza Horizon 4 was faster still, averaging 95fps on Ultra in its built-in benchmark and 119fps on High. Again, Asus' Scar II technically pips the Triton 500 to the finish line here, but I'd rather take that hit on the Triton's performance than have its fans sound like they're getting ready for take-off. The Triton 500 will almost certainly be a great fit for older games as well, as even the taxing Witcher III reached average heights of 74fps on Ultra and 97fps on High.

Naturally, there will still be some games out there that push the Triton 500 to its limits, such as Final Fantasy XV, Assassin's Creed Odyssey (whose strange juddering bug seems to have been fixed now) and Metro Exodus, but even these can reach a playable 60fps on almost max settings without bursting your ear drums.

Assassin's Creed Odyssey, for example, still managed an average of 58fps on Very High (Ultra High only mustered an average of 51fps), while Metro Exodus' benchmarking tool came in with an average of 60fps on High (and that was with a lot of its PhysX bells and HairWorks whistles all switched on, too, I might add) and 50fps on Ultra. You'll likely have to drop down to Medium if you want to switch on Metro's ray tracing, but that's still pretty good going for a Max-Q laptop chip.

The same applies to Final Fantasy XV's various Nvidia effects, too. While it was capable of producing of lovely, smooth average of 67fps when I was running up and down the hills of Duscae on Highest with all of its effects switched off, this dropped to 49fps when I turned on HairWorks and TurfEffects. That's still perfectly playable in my eyes, but even High struggled to do much more than an average of 55fps with these switched on as well. Without them, it was hitting 73fps on High, but it really depends on what your priorities are.

Either way, bar a handful of tough titles, the combination of the Triton 500's graphical grunt and superb fan control is a real winner in my books, and this alone would have probably been enough to put it head and shoulders above almost every laptop I've ever tested. Then I tested its display and it just sealed the deal even further.

Not only is its 15.6in IPS screen nice and bright with a peak white level of 338cd/m2, but its contrast ratio of 1071:1 and reasonably low black level of 0.31cd/m2 (the closer to 0.00cd/m2, the better) means there's still plenty of depth and detail in darker, shadowy scenes, too. Add to that an sRGB colour gamut coverage of 84.8%, which is pretty good as far as laptop screens go (the Asus ROG Strix Scar II only covered 85.2%, for example), and colours have a level of punch and vibrancy to them that you simply don't get on cheaper, lower-end gaming laptops.

Its six-core 2.2GHz Intel Core i7-8750H processor is also plenty fast enough for everyday desktop tasks, and its Geekbench 4 single core and multicore scores of 4987 and 21148 put it pretty much exactly in line with its Asus ROG Scar II and Zephyrus S rivals.

Acer's picked a good 512GB NVMe SSD for the Triton 500 as well. Its random read speed wasn't quite as fast as Asus' two laptops, admittedly, coming in at 38MB/s according to AS SSD's 1GB 4K random test compared to Asus' 47MB/48MB results, but it did have a marginally quicker random write speed, finishing AS SSD's test in 101MB/s as opposed to the two Asus laptops' scores of 99MB/s.

I also really liked the Triton 500's keyboard. Not only do each of its well-spaced keys provide lots of tactile feedback, but there's also plenty of travel - which is more than can be said for my XPS 15 laptop. As a result, I rarely made a mistake while typing on the Triton 500 - except, that is, when it came to occasionally hitting the left Shift key, which is bizarrely the only key apart from Enter that's squashed right up close to its next door neighbour (probably so they can use the same manufacturing mould for their US layouts without making them feel absolutely enormous). Still, it's a small quibble in general, and one that I gradually adjusted to over time anyway. 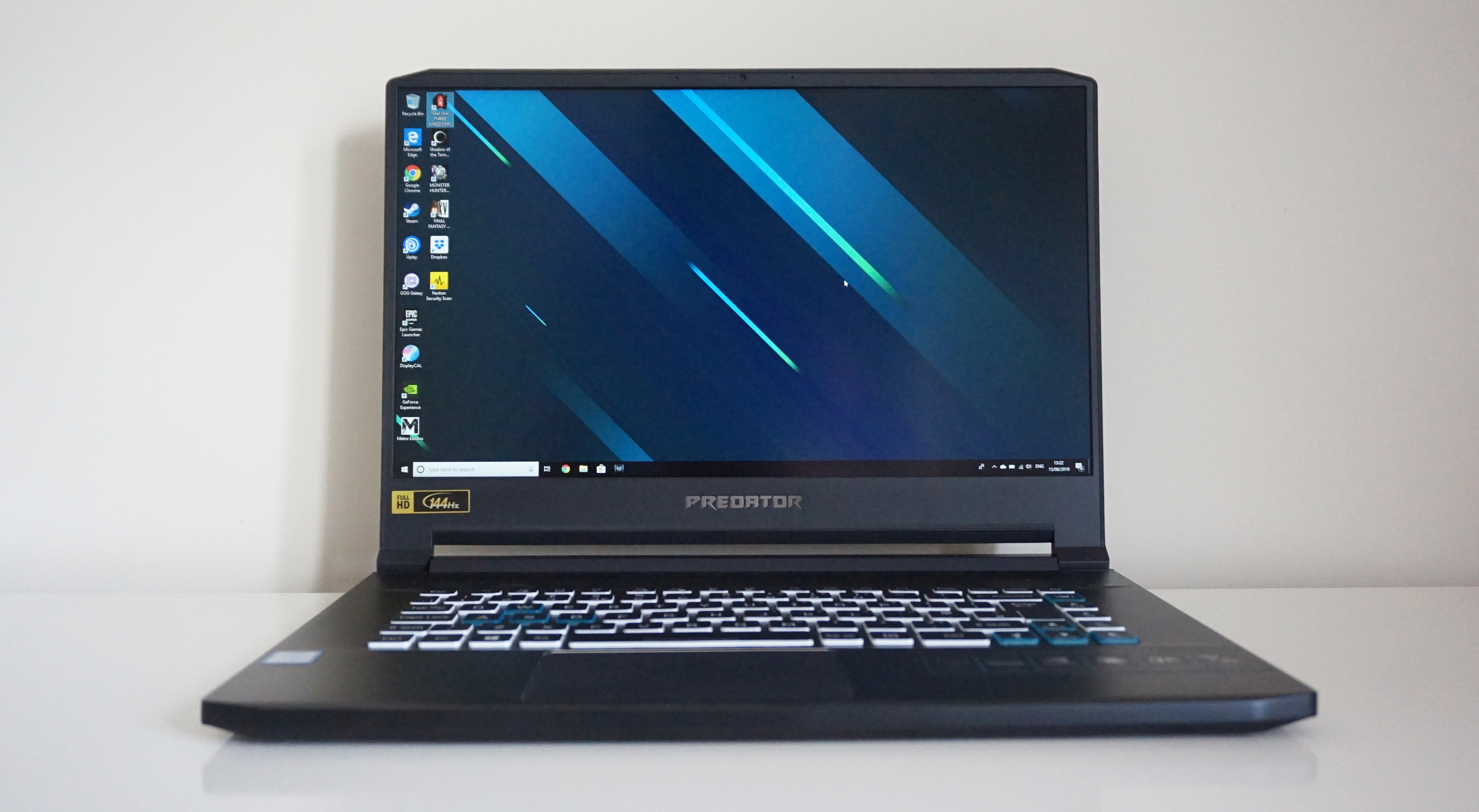 Most importantly, I didn't notice the WASD keys (or any of them, for that matter) getting overly hot while playing games, either. This meant I could carry on gaming as long as I wanted without feeling like my fingertips were about to melt, unlike Asus' Zephyrus S.

All in all, the Acer Predator Triton 500 is one of the most impressive gaming laptops I've seen in quite some time. It's powerful without being horribly noisy, and it's comfy, light and practical enough for general desktop tasks when I actually need to get on and do some work on it.

There's no denying it costs an absolute bomb at £1799 in the UK at time of writing and $2000, but compared to my £1500-odd XPS 15, the Triton 500 definitely gets you a heck of a lot more for your money overall. The Asus ROG Strix Scar II is, in fairness, a tad cheaper at time of writing, coming in at £1630 / $1929, but for me, the Triton 500's quieter fans, slimmer chassis and superior keyboard are well worth the extra expense. Come Black Friday, this is definitely the laptop you're going to want to watch.