Apex Legends' Heirloom sets contain items such as Wraith's Knife Heirloom, along with other of the rarest items it is possible to obtain in Apex Legends. If you've played or watched a fair amount of Apex you may have occasionally seen Wraith banners touting this wicked-looking glowing Knife, or even seen it in-game once or twice. Our Apex Legends Heirloom guide will walk you through exactly what this Knife is and does, and how to get your hands on these rare Heirlooms (yes, there's more than one!). 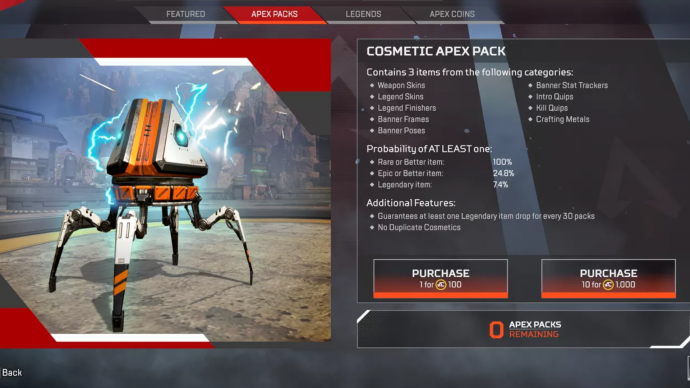 This is just one tiny corner of our massive Apex Legends tips and guides series, which is expanding every day with pages on everything from guides on individual Apex Legends characters and Apex Legends guns & weapons to perfecting your Apex Legends landing using the little-known wave-jumping method. So check it out! Go on; we'll wait.

Heirlooms are the name given to the rarest of all Apex Legends' cosmetic items. You probably know by now that Apex follows a similar route to other battle royales - particularly free battle royales - with regard to unlocking or buying cosmetics from character skins to finisher/execution styles. As you progress through the different experience levels you'll unlock Apex Packs (loot crates), each of which can be opened out of game to reveal three new cosmetic items.

Usually, these items range from Common (white) through Rare (blue) and Epic (purple) and finally, if you're lucky, to Legendary (gold). But in fact, there is an even higher tier than Legendary. These unique cosmetic items all currently revolve around Wraith's Knife, and you can unlock all of the Knife Heirlooms at the same time in a single set - if you play enough games, that is.

How to get Apex Legends Knife Heirloom

Unfortunately, the odds are not in your favour with regard to unlocking these rarest of Apex Legends cosmetics. According to the official FAQ for Apex Legends, the chances of receiving an Heirloom in an Apex Pack is less than 1%. How much less, we don't know. But you'll know when you've found one, because it has a distinctive red glow about the item once revealed, accompanying the keyword "Heirloom" just beneath the item name. 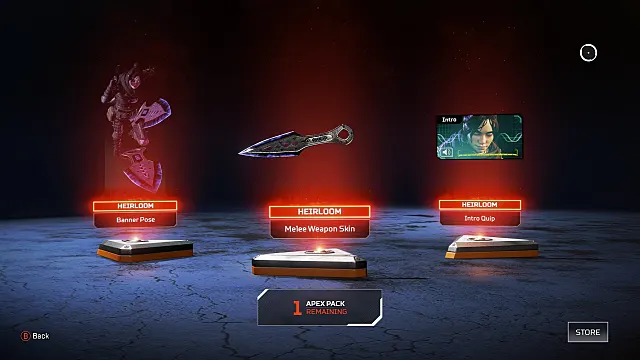 However, there's good news too! Because Respawn Entertainment are such lovely people, they've decided to give you a guaranteed Heirloom set in your first 500 Packs. This is very similar to their decree that you'll receive at least one Legendary in their first 30 Apex Packs, but on a larger scale. And notice that I say "Heirloom set", because it means you will unlock all of the Knife Heirlooms together.

Now, before you get too excited, you should know that these Heirlooms are - and forever will be - purely cosmetic. So you can slash at enemies with your fancy new Knife instead of punching them, but it doesn't deal any extra damage or give you any benefit other than looking roughly 80% cooler while doing it.

But that's still enough of an incentive, if you ask me.

There is currently just the one Heirloom set in Apex Legends, which is the Knife set for Wraith, composed of three items:

But it's agiven that Respawn will be adding more Heirlooms to Apex Legends in future updates, and I'm sure we won't have to wait too long before this happens. The real question is whether they will announce when new Heirlooms are added, or whether they'll keep it hidden from the playerbase until players find out for themselves, to maintain the items' mythic and secretive reputation.

So that's pretty much everything we know on the Heirlooms and on Wraith's Knife in Apex Legends. So good luck on the road to 500 Packs! Hopefully the upcoming Battle Pass (expected later this month) will help speed things along and offer you a sweeter deal on the packs required for these Heirlooms, the rarest items in Apex Legends so far.