Like all trading card games, the bread and butter of every deck are cards that are first introduced. There's a reason why the Power Nine were so revered in Magic the Gathering, and to some degree still are. In Artifact, the base set that will be released is called the "Call to Arms" set and will include a whole host of cards for each of the five different types. This guide has all the currently known cards in the set, along with a brief explanation of what each card type is. 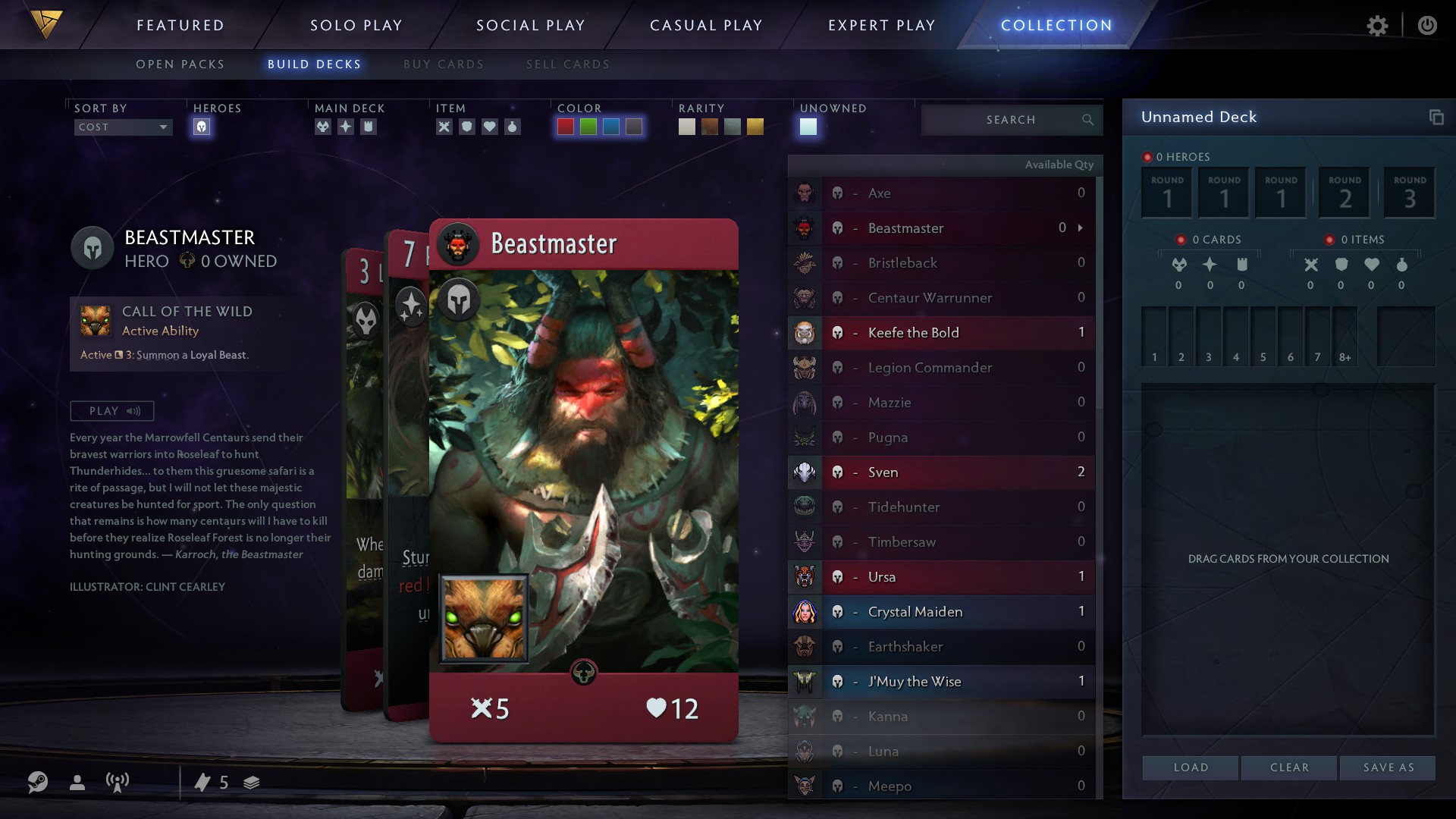 Each deck can have up to five hero cards. Not all are in play at the beginning of the game. More come in at the beginning of each round and they appear at random until all the heroes have been placed. You can place the heroes in lanes when they appear. Heroes have attack, health, and sometimes armour (this can go to negative numbers and work exactly how you'd expect - attacks will deal more damage!), but can be upgraded to increase all three attributes. They can also have skills that act as passive abilities.

Each one comes with their own values for attacking and health. Some excel in melee combat, coming with starting armour and skills to suit it. Others have abilities that trigger multiple times via the pulse key term. All of them are associated with a particular colour and come with their own signature spells, creeps, or improvements that you can cast. On top of this, they're also a bit of a restriction on the kind of cards you can cast in each lane. For example, if you have Phantom Assassin in row 1 and Zeus in row 3, but nothing in row 2; then you can only play black cards in row 1, nothing in row 2, and blue cards in row 3.

Should a hero be killed, they're out of the game for the rest of the round and the entirety of the following round, but return at the beginning of the second full round that they're not present. You can change which lane a hero is put in at this stage. When a hero is out of the game, there is an indicator at the top left of the screen to show how many turns they have until they return.

Heroes have icons above them which are slots to equip items. You retain these even if the hero dies, though you can replace the item with another of its type should you wish. Here are the three slots in detail:

Here are all the currently available heroes in Artifact. Since this is a long list, you can search for your favourite hero using the search bar at the top of the table, which will bring up more information about the hero. 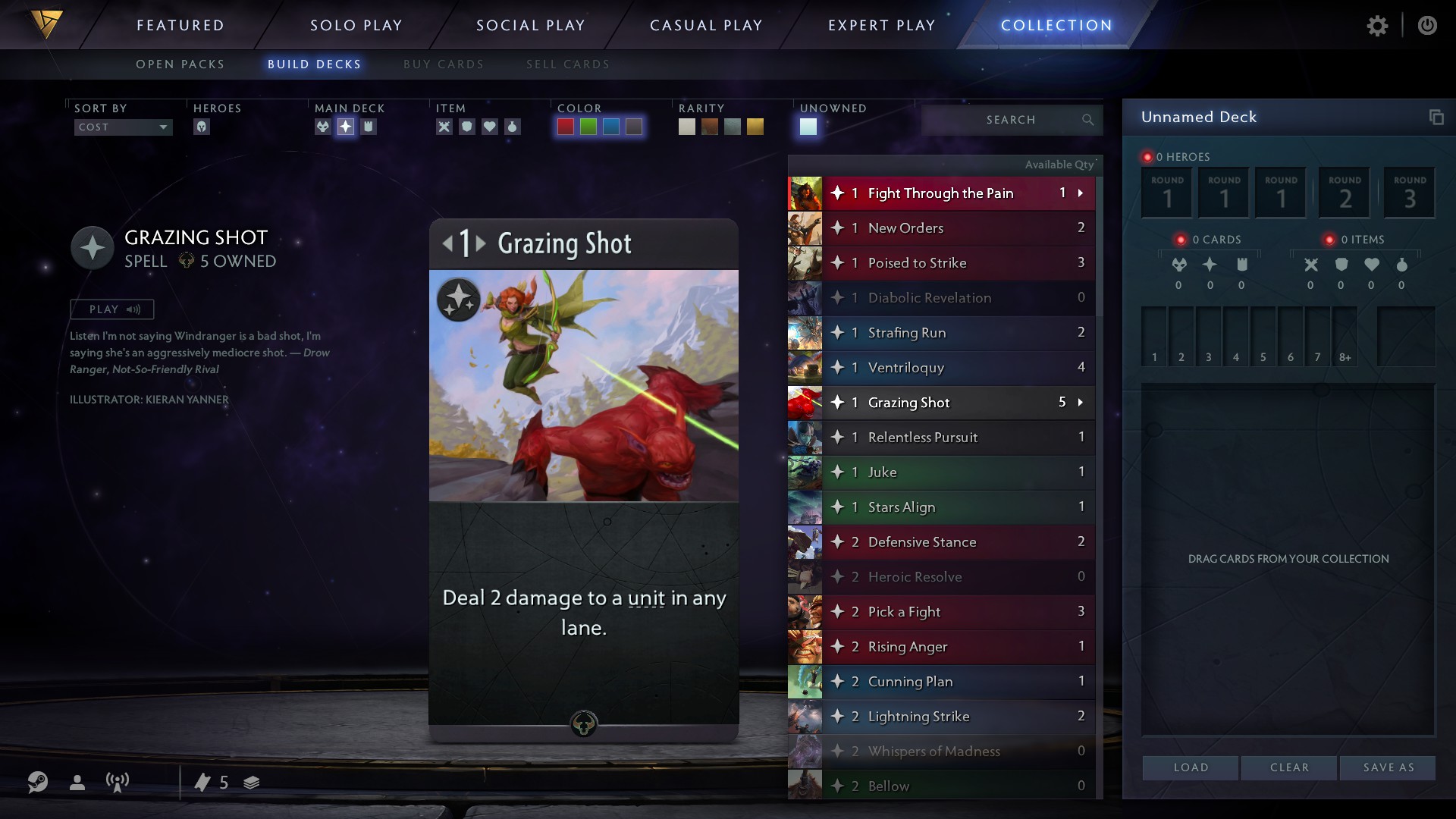 Spells work exactly like you'd imagine them to, in that they cost mana and can affect the game board. You can only cast spells during each of the lane phases, so there's none of the "Instants" you can wield in Magic the Gathering, and they can affect either their own lane, another lane, or every lane. There are exceptions of course, which are always indicated on the card as to where you can play the spell. Below are all the ones in the game at this time. 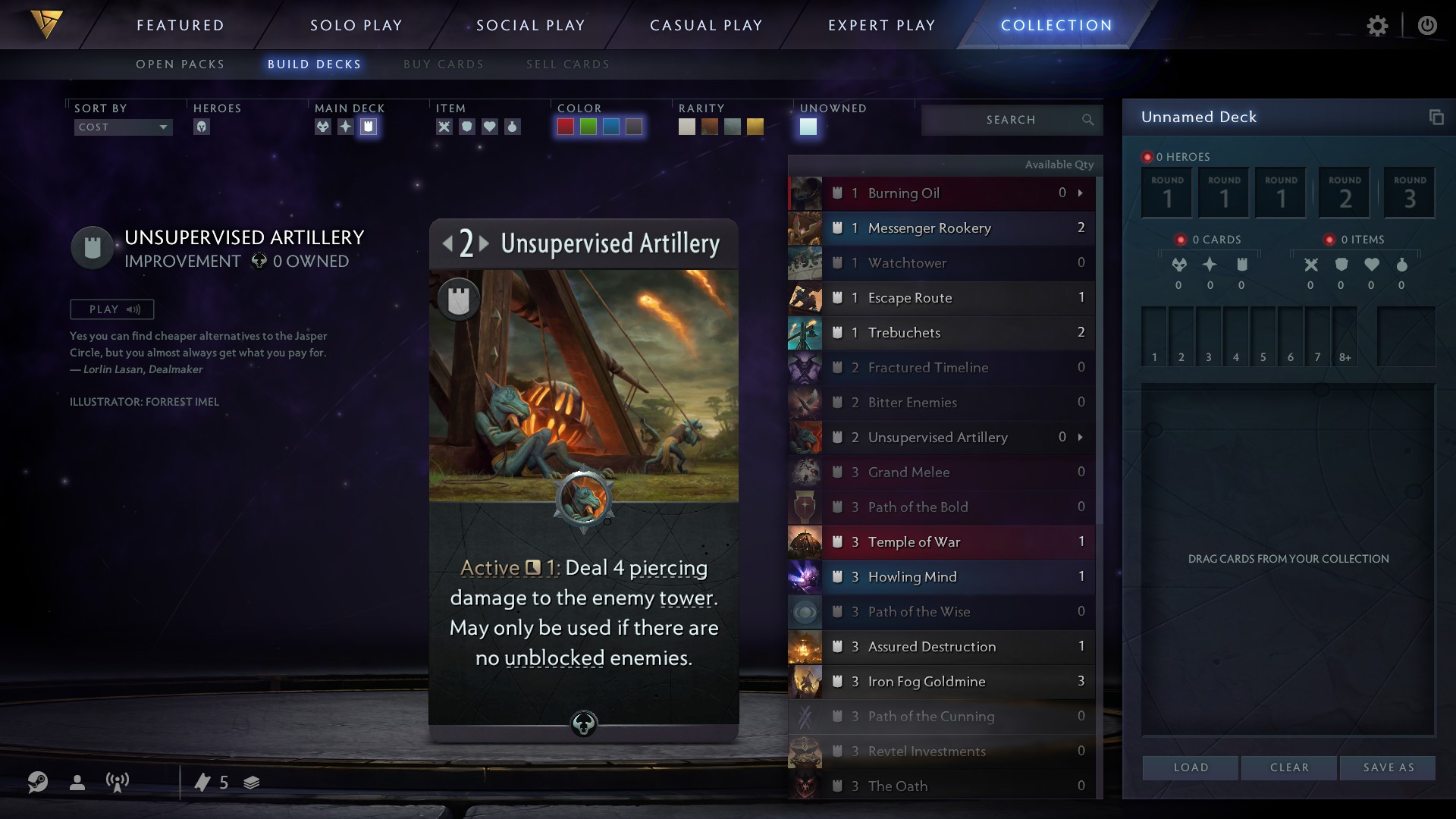 Improvement cards are semi-permanent buffs that you can apply to each lane. They can be removed with some condemn effects, but they either give an affect that triggers at the beginning of that phase, or an active ability that uses mana to trigger it. Below are the improvements that you can augment your lanes with. 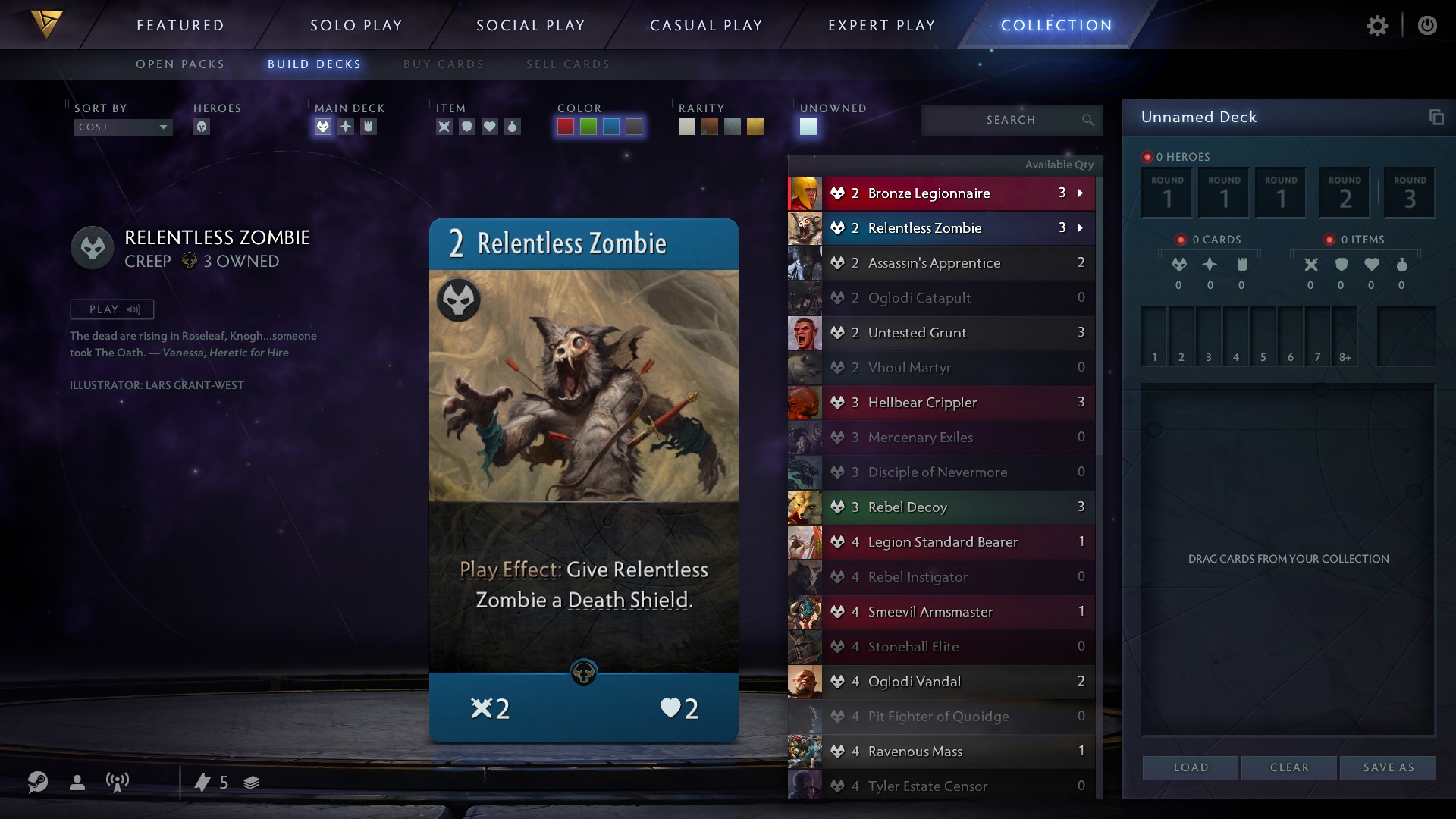 Finally in the main decks, you can put in creeps. They're basic allies that have the same attack and health stats as heroes do. These do not come back once condemned and cannot have items equipped to them to make them stronger. Each one has a creep type indicated by the symbol on the top left, as well as a casting cost. All non-basic creeps have a casting cost, even those that come into the lane via spells. These are different from the generic creeps in that they come with abilities that can help or hinder units throughout their assigned lane. While not being able to equip them is a bit of a bummer, they can be targeted with any spell that targets units rather than just heroes. Below are the currently known creeps that are in the game. 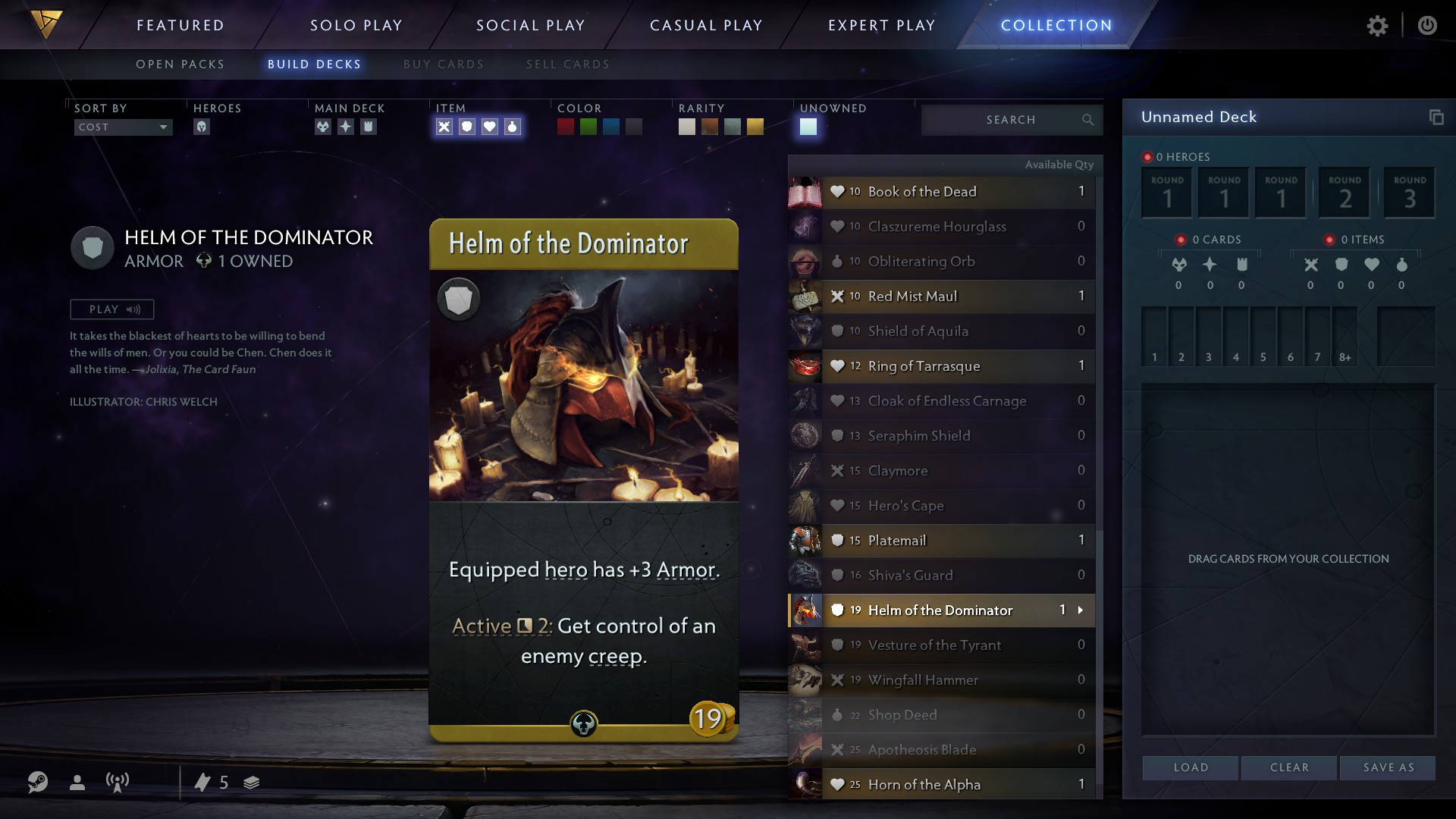 Items are gold lined cards that are obtained at the end of each round. You'll have the choice to buy cards out of a selection of three per round, which does get refreshed with a new card from the item deck when you buy a card. In order to draw them, you'll need to pay the cost in the bottom right hand corner.

Coins are accrued by killing things, so for killing creeps you get one gold, and heroes net you five gold. These can then be equipped to heroes for free, so ones with heart icons for example can be equipped to the heart slot. These are equipped and remain on the hero even after death. Some items also have activated abilities that can be triggered during the lane phases.

Items are the only cards that are not colour dependent and are split into four categories: Weapons, Armour, Health, and Consumables. Below are the ones currently in the game.

With all the cards in the set now explained, you'll probably want to get a list of the best decks and how some of the keywords are used to the player's advantage. Head over to our Artifact best decks to find them, or if you think you can make a better one, head to our Artifact deck construction guide.