Artifact is Valve's contender to the Tradeable Digital Card Game genre throne, currently dominated by Hearthstone. It takes inspiration from DOTA 2, and other MOBAs, with its three lane system and is a highly complicated game at first glance. However, now that Artifact has been out for a short time, there's a fair few decks cropping up that are worth looking at if you wish to get a competitive edge. This guide hub will take you through the basics of how to play the game, as well as define some key terms, show you how to draft well, and list some of the best decks currently available for the game.

Like any other digital TCG (Trading Card Game), the emphasis is to construct the best decks that you can in order to smite your enemies. Below are all of the links to our other guides on Artifact to get you started. These will be periodically updated as time goes by, so make sure that you check back frequently for any additions. 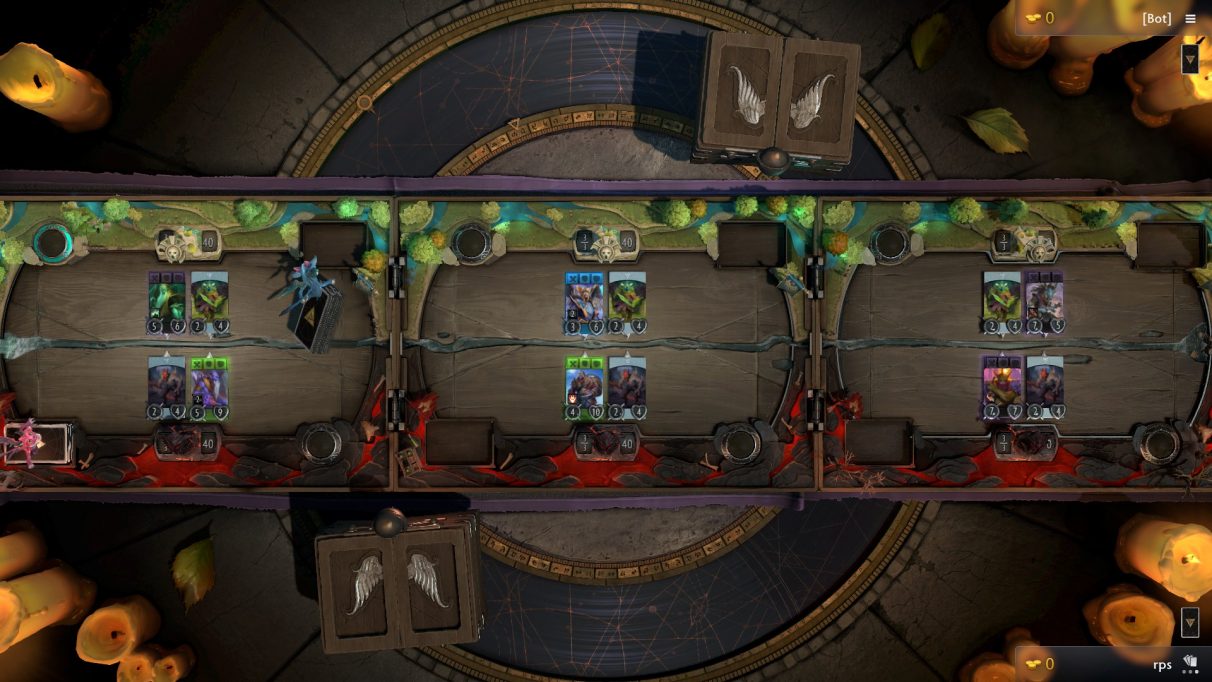 In order to win a game, you either need to kill two of the three towers, or kill one tower and its ancient outright. Each tower has two health pools, with the second representing the ancient. The ancient has double the health that of the tower, so normally the health of a tower is 40, but goes up to 80 upon being toppled for the first time. It is possible for players to have handicaps, reducing the tower's overall health. The thing to keep in mind is that the second tower has immunity to damage the first turn that it appears, so you can't just build up a lot of damage and expect it all to hit home.

At the beginning of the game, players will skip the first shop phase and their units will already be deployed for the first wave of heroes and creeps. During the beginning of each subsequent turn, players will then be able to shop for items at the secret shop with gold accrued from killing enemies so far. Upon completing this shopping trip, players will place any heroes and basic creeps that come into play onto a corresponding lane. Their position will then be randomised.

Once done, the players will draw two cards and then begin to play cards onto the left-hand lane, starting with the player who has the initiative. Certain cards affect who has initiative. Players can opt to pass priority, giving their opponents a chance to play a card. If both players pass, their units attack each other. When units attack, they typically only attack the unit in front of them, meaning those without a blocking combatant can attack the opponent's tower. Some cards do affect which units are targeted by a particular unit.

After they attack, it's onto the middle lane, where they cycle repeats, but the mana pool used is for the middle lane. After these creeps and heroes attack, the game shifts to the right lane with its own mana pool. Once the right lane has attacked, the round is over, with a new one beginning thereafter. To put it simply, aside from the first turn that skips :

One other thing to note is the timer in the bottom right (the circular Artifact symbol with the green border. This ticks down when you have priority for the turn, no matter which phase you are in. Once the priority runs out, you'll pass initiative and have less time during your next initiative. The time you have reduces for each turn that is skipped. Naturally this is something you don't want to do, but it's useful information for those who come up against a player who is away from their computer.

Artifact features many modes on to play the game, but the game doesn't make it completely clear what the restrictions are for some of the modes. It's likely that these will change during the game's lifespan, so keep checking back to see if there are any updates. 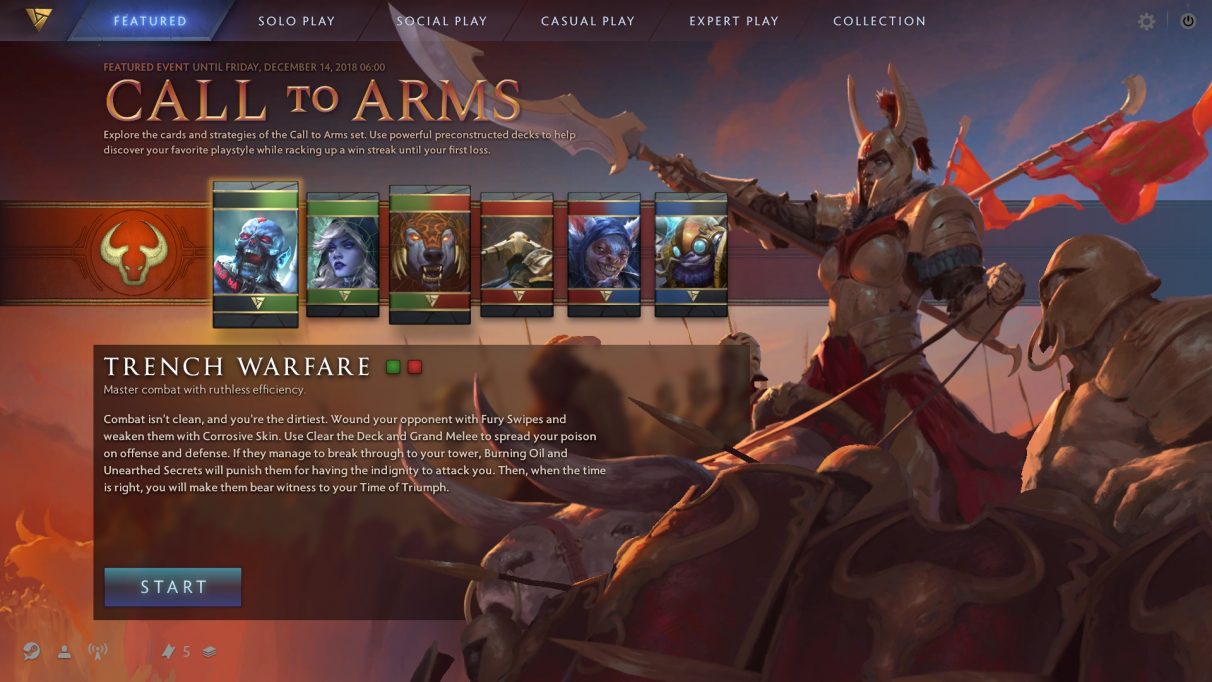 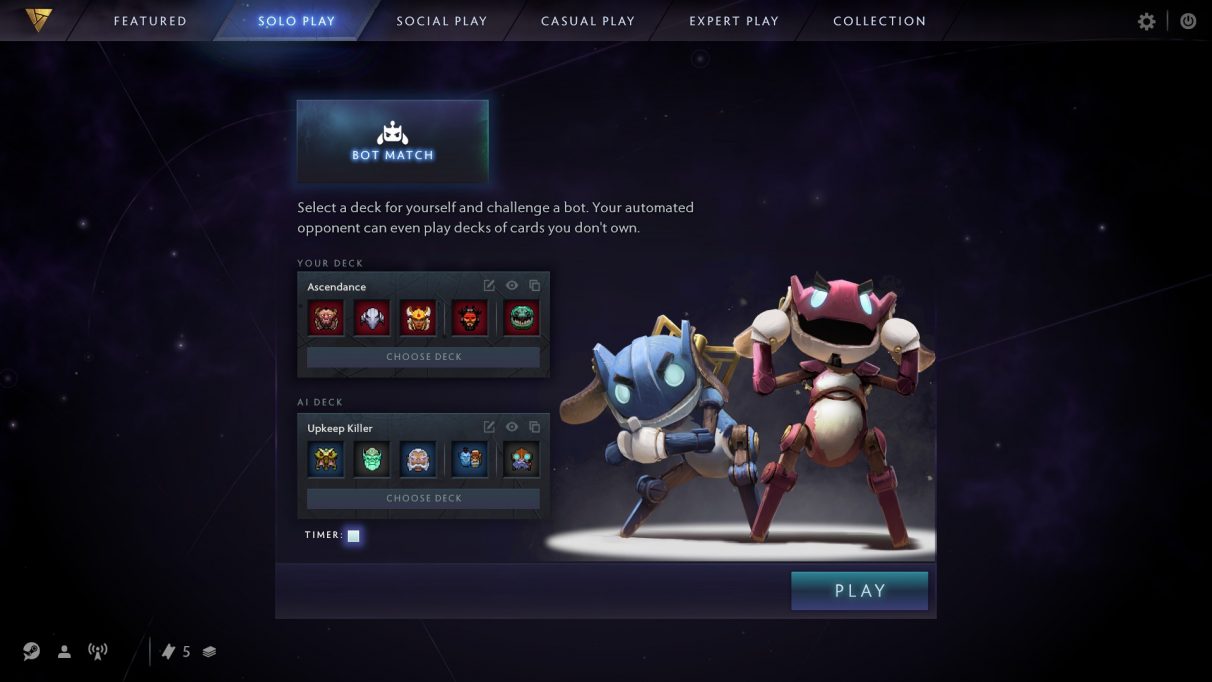 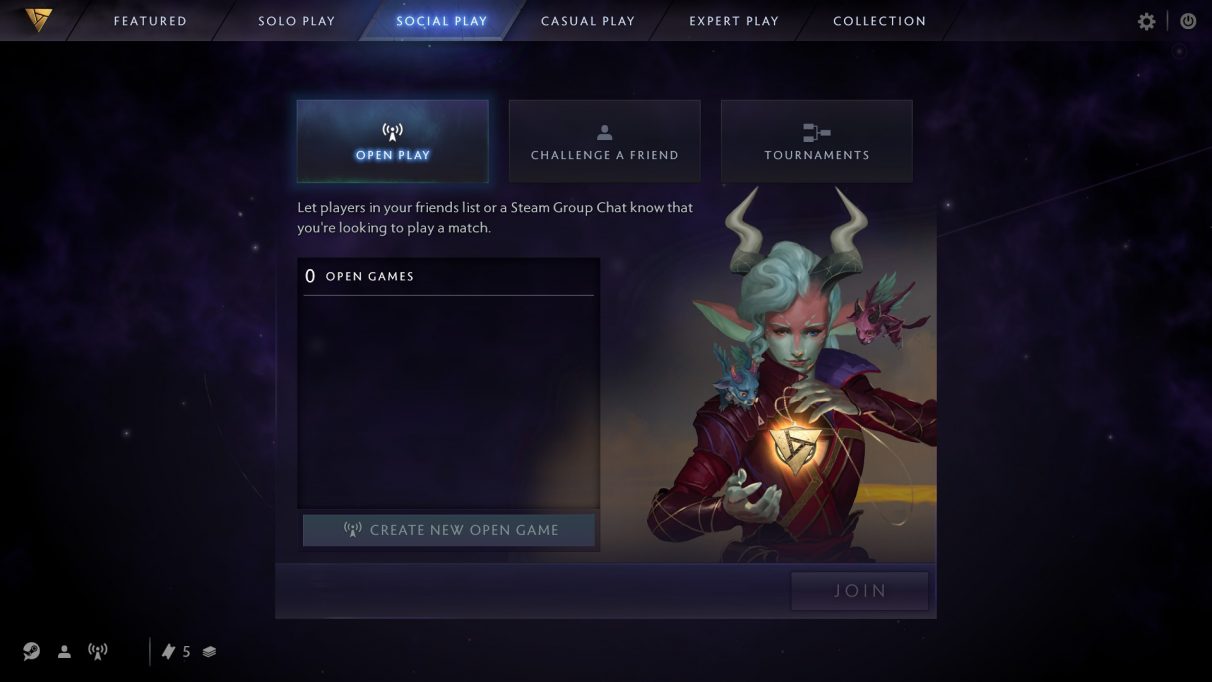 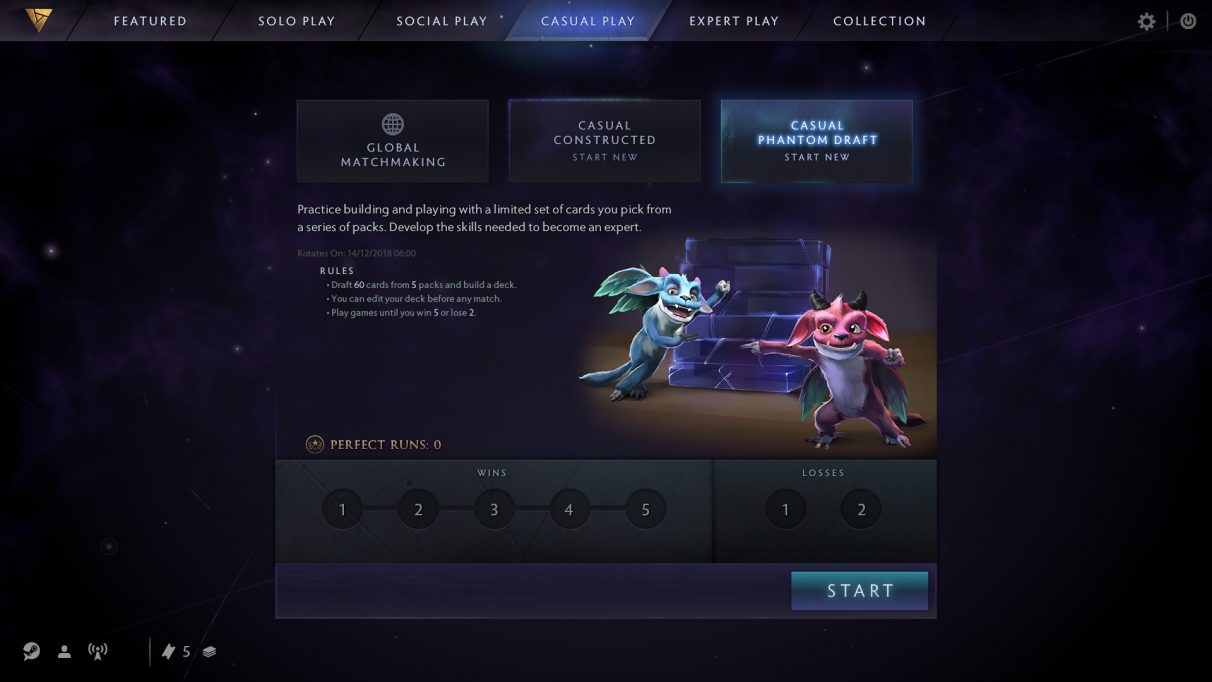 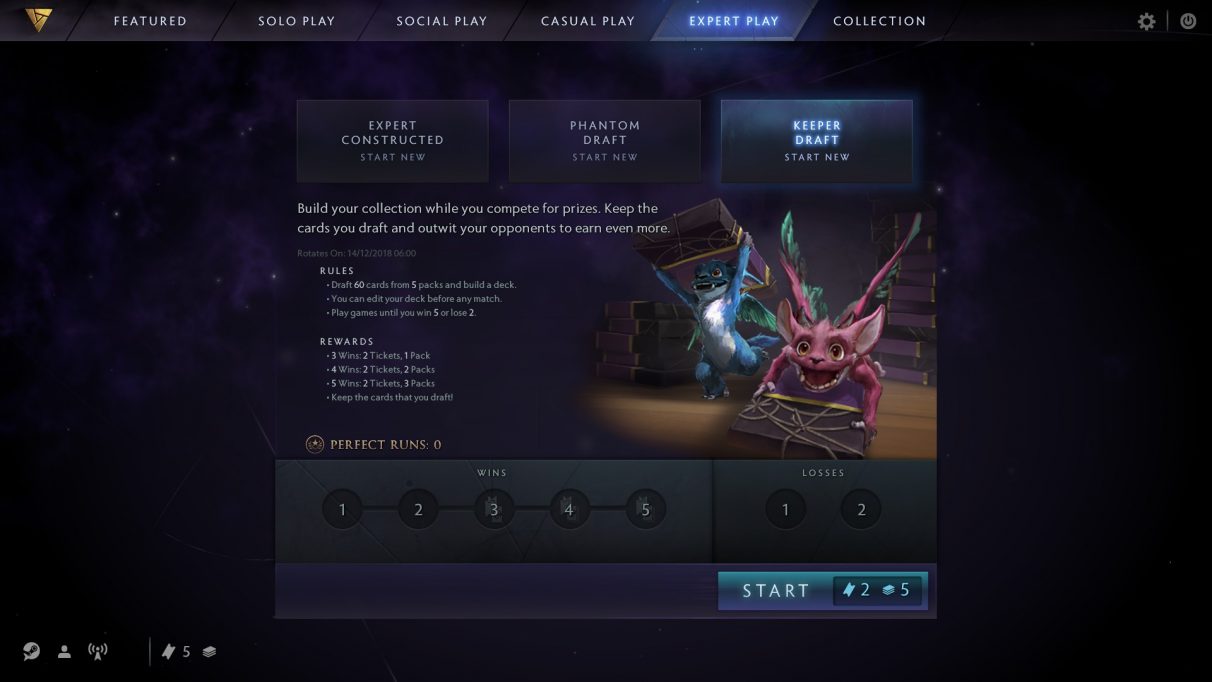 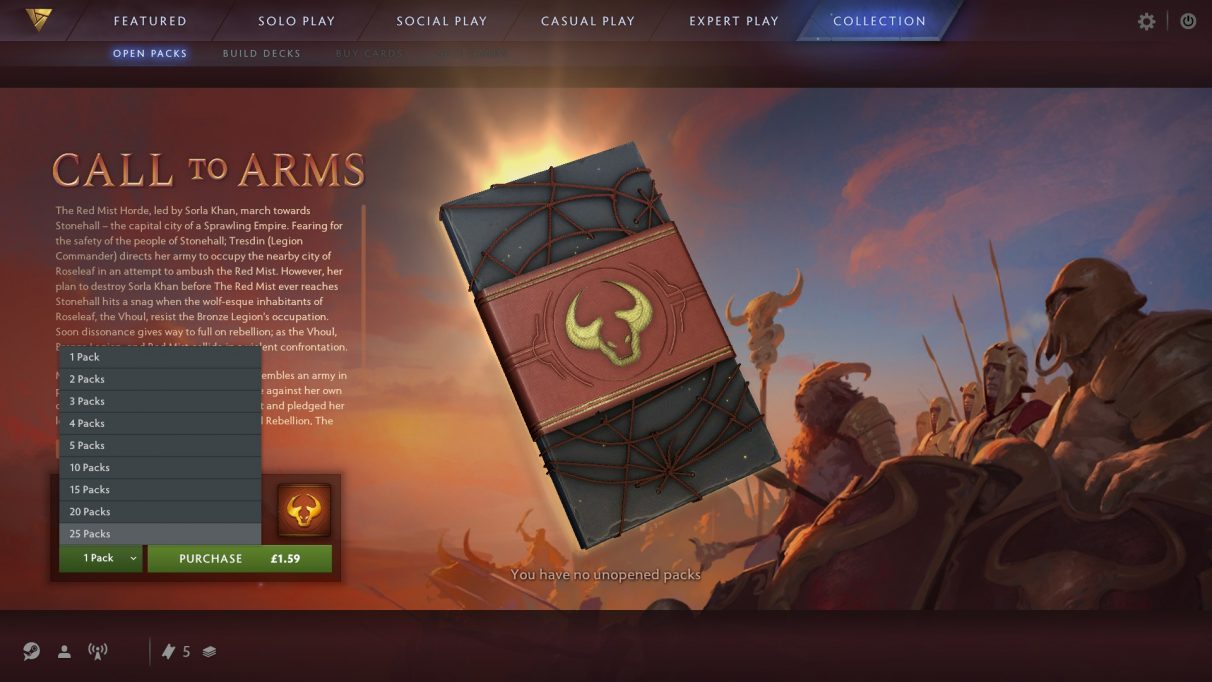 Artifact isn't a free-to-play game, with an upfront cost associated with it of £15.99/$20.00/€20.00. Buying the game will net you a Green/Red deck and a Blue/Black deck to start you off, as well as ten "Call to Arms" set packs. These packs normally cost £1.59/$2.00/€2.00 for one pack and you can buy multiple packs at any given time, up to 25. However, there is no discount for buying multiple packs at the same time, so if you wish to buy booster packs, make sure that you set yourself a cap and stick to it. You can also obtain packs as rewards for winning games in Expert play modes such as Expert Gauntlet.

Each pack contains 12 randomised cards, with a guaranteed hero, two items, and at least one rare card. Additionally, cards that you obtain in booster packs can be sold on the Steam Community marketplace, accessible in the game itself. Currently when you open booster packs, there is nothing that you can do when you open a duplicate hero in a booster pack. This will change in the next week or so, as Valve have said that duplicate starter heroes will be converted into Event Tickets for use in other modes. Other improvements are also coming, though exactly what is coming hasn't been announced.

Finally, as we tend to do with these guide hubs, I figure I'd leave you with some choice tips for effectively playing Artifact based on my experience with the game thus far.

That's all we have so far in this hub guide for Artifact. Do check out some of our other Artifact guides for more information on things, such as all the keyword explanations, how to construct a deck, and even a complete list of the cards in the game so far.