There are normally two kinds of trading card game players: Those that like to construct decks and then challenge other players, and those that like to draft packs and build viable decks from their limited pool. With the variety of drafting modes on offer in Artifact, including a no-risk, free variant that is good for those who like to practice. This guide has some tips to get you started, such as some things to think about when drafting, as well as the best cards that you can draft.

Drafting is just one component of Artifact and it's worth understanding how the game plays and what the cards do before jumping into a draft. Check out our Artifact guide hub for more on how to play the game, as well as a rundown on the colours and the types of cards that you can play. 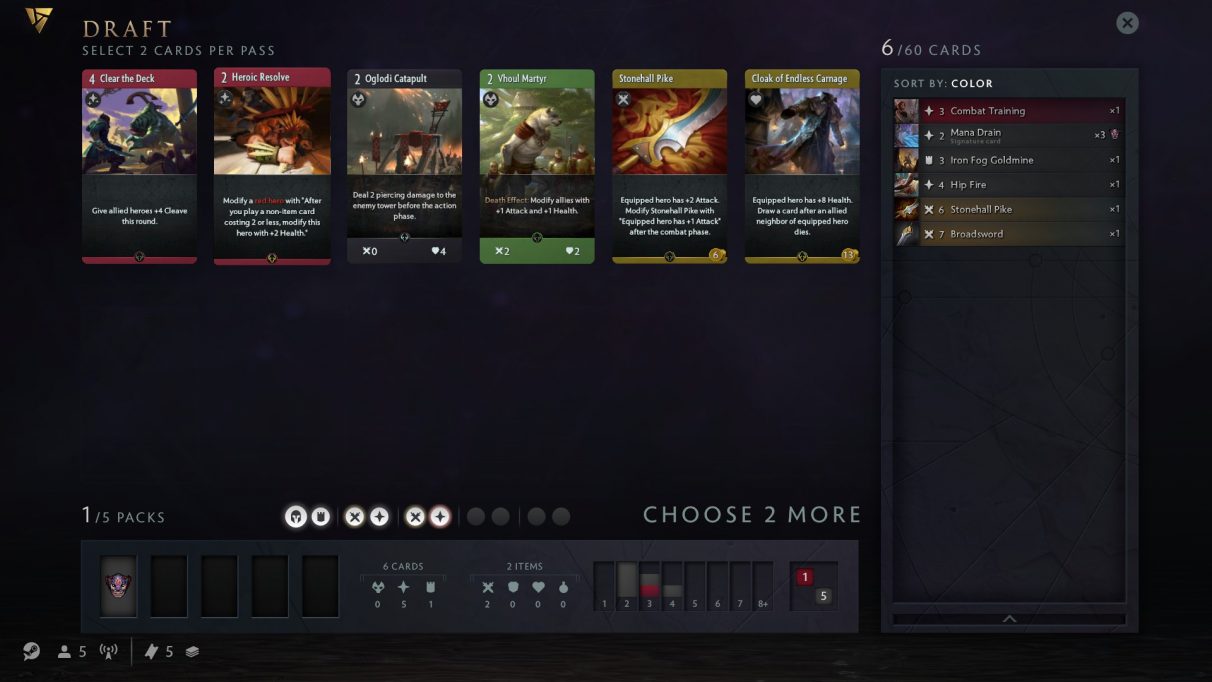 Limited play modes such as drafting always have some stand-out cards, but some are almost certainly universally good. Black heroes seem to be dominating the meta, but in particular there are some great ones such as Bounty Hunter that put in a lot of work in gold generation. There are other Red heroes as well whose spells can make them tougher, while green units that focus on aggro strategies can overwhelm players easily.

As for a tier list, there is one here that's being constantly updated by Reddit user "Nostam", along with fellow contributors by the handles of "muzzy", "frankinabox", and "Yoisflo". Currently it seems that Blue is the most consistently weak colour with small number of cards getting consistently good rankings, while Green has the majority of highly rated cards, including the bulk of its heroes being of mid-to high tier. Green cards also have the most mandatory picks, with Mist of Avernus and Unearthed Secrets being top priority picks. There's also a fair few items that are considered playable, with the likes of Blink Dagger and Stonehall Cloak being among the most coveted picks.

That said, I have had the most success so far with a Blue/Black control deck that focuses on using Sniper and Zeus to manipulate the board. You can take a look at it here, just don't ask too many questions as to how I am able to play two Bloodseekers. This seems to be a quirk with drafting in that you can have multiple copies of particular heroes. Other powerful effects can be improvements that focus on creature management. Conflaguration may be worth running a copy of just so that you can control a board position, while Aghanim's Sanctum makes throwing buff spells on your black heroes all the more viable for burst damage. Finally, limited play relies on having an arsenal to unload with and having the opportunity to do so, so any cards that allow you to draw cards or give you initiative can be worth considering.

As for which items to pick, it's generally not a good idea to have the really expensive items unless you know for certain that you picked up a Bounty Hunter and copies of Payday. Stick with a budget of 10 gold as it's unlikely you'll have more than this in your coffers at any time unless your deck is focused on gold. Good examples of items to draft are Blink Dagger and Phase Boots for manoeuvrability, Stonehall Cloak is a great defensive item, while Barbed Mail and Blade of the Vigil for mid-game boosts to heroes attack and defence.

The first thing you should consider when you open your first of five packs is which colour(s) you'd like to play. The basic principles found in our Artifact deck construction guide apply, so be sure to check that out if you need a helping hand. You are able to choose two out of the pool of cards per selection, so it's a good idea to see which two you think would work well with each other first.

As you pick cards, you will find yourself forced to pick a second colour. At this point you should have a few cards of your first colour to get an idea of which cards in the selection may be the best fit. You may find on a rare occasion that you can't pick anything that's appropriate. This is par for the course as you will have spare cards that you won't be using when you build your deck. As the cards run out in the pack, you will also find that you get cards of completely unrelated colours, so don't worry about them.

When you get to pack two and beyond, be sure to use your card selection on the right hand side to scan through the already drafted picks. You may find some cheeky combination of spells and items that bolster your current roster, or fill in a gap in your arsenal you may have missed, such as removal spells or card draw. This can also be where you decide to change your colour combinations if you get a really good run of an unrelated colour. Only do this if you're around pack two though as any later will only hurt your selection going forward.