Artifact has such a vast lattice of rules and mechanics permeating its CCG/MOBA chimeran mass, it takes a fair amount of time before your mind turns to some of the subtler phenomena present within each match, and you start to wonder: “Wait… So how does that work again?”

Prime among these confusing minor-but-actually-major mechanics is Artifact Pathing, which is the game’s term for what a unit targets each turn. As it turns out, a full understanding of this deceptively simple set of rules can contribute enormously to your ability to avoid those unfortunate oh-I-didn’t-realise-that-would-happen occurrences.

Below you’ll find just about everything you need to know about Artifact's Pathing rules, including what determines unit Pathing, how to reset Pathing, and how certain abilities such as Swap affect Pathing in interesting and possibly unexpected ways. Ready? Nor am I. Apply some downward momentum to your mousewheel and let's puzzle this out together. 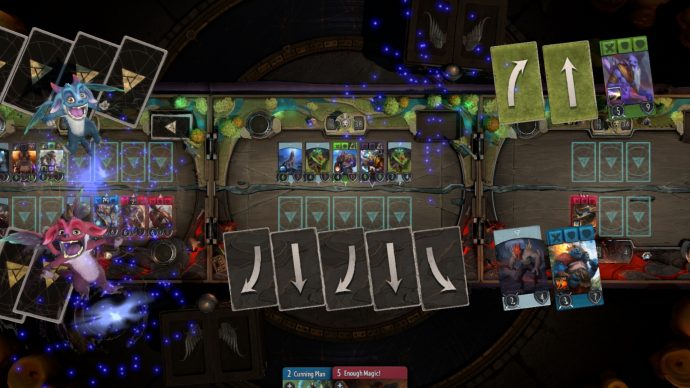 You may have noticed during your games that units will not always attack what is directly in front of them, even if it seems like they should. The answer lies with a secret set of cards known as Pathing Cards - and in fact, you’ve likely seen these cards being played many times before. They’re the arrow cards which appear briefly at the end of the Deployment Phase, just after you’ve bought your items and designated lanes for your heroes (if you’d like a better grasp of the various phases of a game of Artifact, head on over to the Turn Structure section of our Artifact guide). 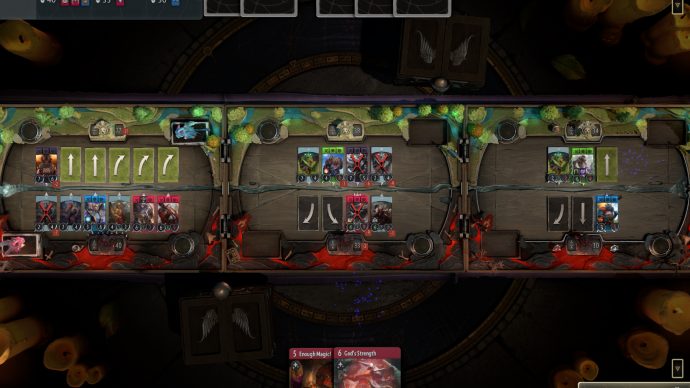 On round one, units will always path straight forward, which makes each of the lanes at first nice and easy to understand. However, on subsequent rounds, each unblocked unit (units which are not immediately opposite an enemy unit) at the end of the Deployment Phase will be randomly assigned one of three Pathing cards: Forward, Left, or Right. If a unit paths forward, then they will attack what is directly in front of them - i.e. the opponent’s tower. If a unit paths left or right, they will attack the left or right enemy neighbour, respectively.

Now that we’ve peeled back this precursory layer of the Pathing Onion, the important thing to bear in mind is that the game is biased towards direct attacks. Forward Pathing has a 50% chance of occurring, while Left and Right Pathing each have a 25% chance. If you like you can think of it as a deck of four cards containing two Forwards, one Left, and one Right.

What’s more, if a unit draws a Left or Right Pathing card and there is no corresponding enemy neighbour to target, then that unit will default back to a direct head-on attack. Which makes sense, really, because if not then that unit’s attack would be wasted hitting thin air. So if two out of the three of a unit's possible targets are empty, then there is actually a 75% chance that the unit will path straight forwards.

Those are the fundamental tenets of the Artifact Pathing system, but there are a few situational addenda (aren't there always?) which allow you to assert some control over the randomness. You’ll need to remember these things if you want to avoid getting caught by surprise during a match:

However! There is one notable exception to this rule, and that is…

As you’ll know if you’ve cast your eye over our handy guide on Artifact keywords, Swap is an ability which, predictably, swaps the positions of two units. Sometimes Swap is limited to neighbouring cards; sometimes it bestows the freedom to swap with any other allied unit. However, the crucial point is this: you can swap the units around, but the pathing directions will stay fixed in place. 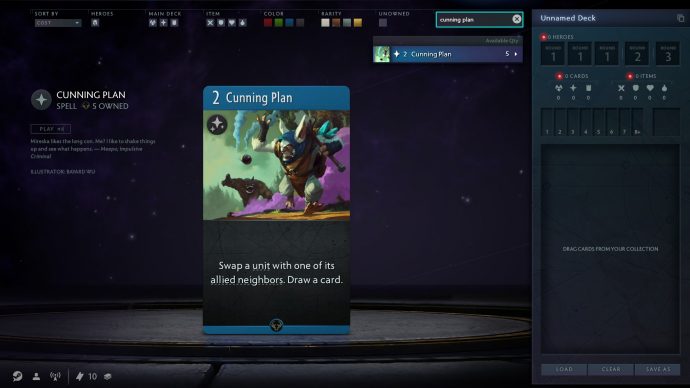 It’s rather confusing to explain in text, so I’ve prepared a little gif below to illustrate this point. Here, I play Cunning Plan, which swaps the two units in the lower-right corner of the lane. Keep an eye on their arrows, and you’ll see that while at first the arrows seem to swap over along with the cards, they then rotate back to their original positions.

Confused? So was I at first. Don’t worry. It takes some time to wrap your head around the intricacies of the Pathing system as a whole, but once you take all of these tidbits of information into account, you'll find that you are able to influence the game on a greater number of levels than before, and possibly than your opponent.

A great way to get used to the Pathing system and to see all these rules in action is to slap together a test deck (I’d recommend Green/Blue for the purposes of this), and fill the deck with nothing but creeps and abilities which move around or swap units. Then play against a bot, and just try out different things. You’ll soon get the hang of it, and the rules will become second nature.

Hopefully that clarifies a few things, and answers some of the pained “but why…?” questions you had after that last game. While we’re talking about decks, why don’t you head on over to Dave’s Artifact best decks guide? Or alternatively, you could have a gander at crafting your own using this handy walkthrough of Artifact deck construction principles and guidelines.