The Asus TUF Gaming K5 falls into this latter category, although Asus would rather you commit an even graver crime and call it a MECH-BRANE keyboard as opposed to membranical. Both terms deserve life sentences as far as I'm concerned, but thankfully the TUF Gaming K5's generous feature set and quick, tactile keys earn it a get out of jail free card. Here's wot I think.

Priced at a reasonable £69 / $80, the TUF Gaming K5 is already a lot cheaper than my other favourite membranical and best gaming keyboard winner, the Roccat Horde Aimo. It's still pretty bulky thanks to the built-in wrist rest, but its more traditional shape and shaved off edges make it feel less like a giant hunk of plastic than its Roccat rival.

Indeed, being part of Asus' TUF series means it should be a lot more durable than your average gaming keyboard, with Asus claiming it's both spill-resistant up to 60ml of liquid from "cans or cups" (more on that in a sec) and 1.5x more resistant to sweat and friction. They also claim it's 5x more resilient against abrasion, but unless your palms have the texture of a scouring pad, I'm skeptical over what this will actually protect against compared to the regular friction resistance. 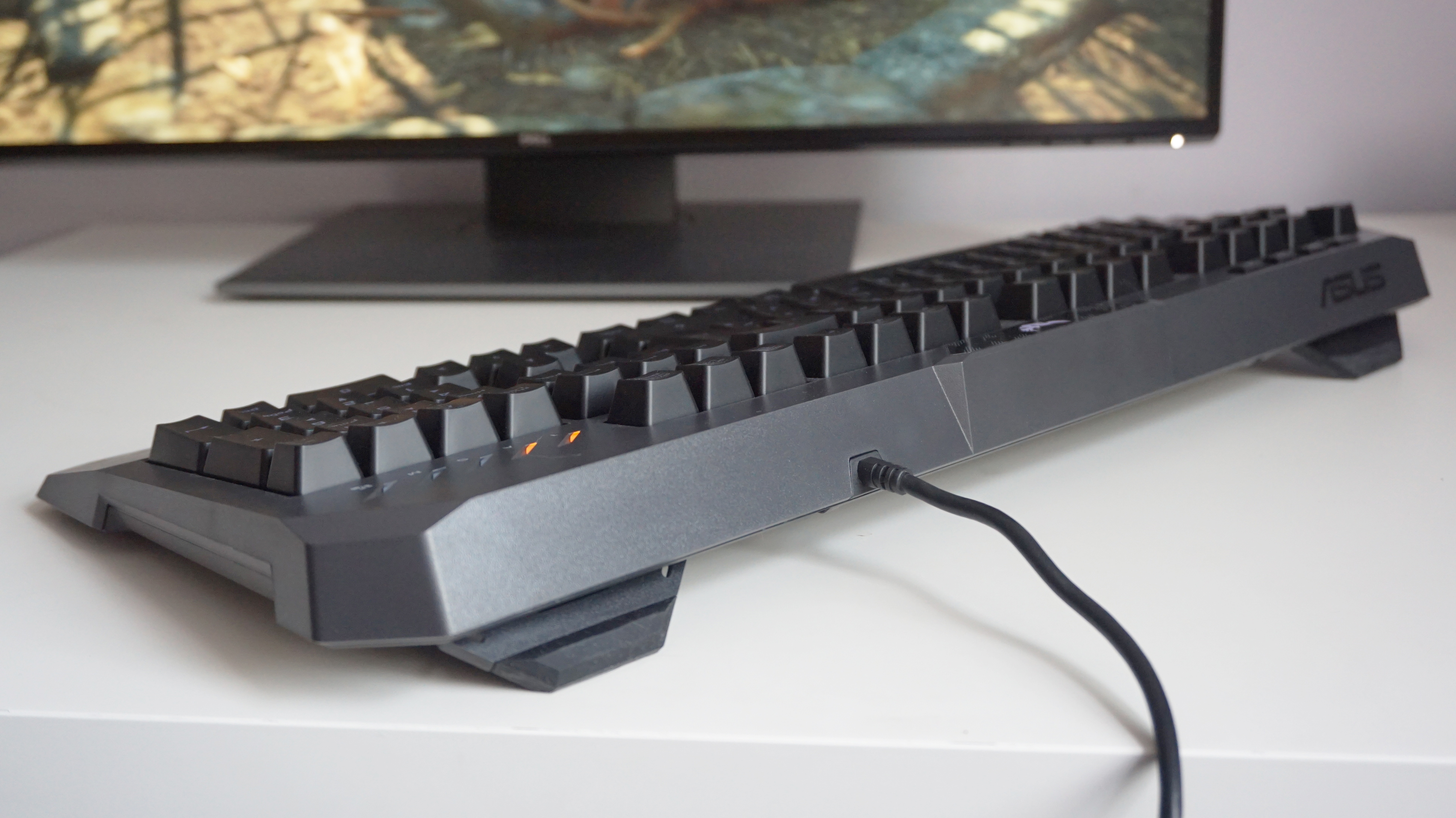 Of course, durability claims are always tricky to test without an extreme amount of long-term use. However, I can say that during the month or so I've been using the TUF Gaming K5, it still looks pretty much good as new - which isn't something I can say for the Horde Aimo. Whereas the Horde Aimo started to look a bit scruffy after a similar amount of time on my desk, with small greasy imprints starting to show on the wrist rest and a little bit of discolouration elsewhere across its plastic frame, the TUF Gaming K5 could almost be fresh out of the box. There are still traces of grease if you squint hard enough, but there's no denying it's in a much better shape than the Roccat.

Its spill-resistance should also go some way to help keep it in tip-top condition as well, although once again I was initially a bit wary of Asus' "cans or cups" claim. After all, most spill-resistant things are only spill-resistant to water, not the fizzy pop concoctions you usually find in "cans or cups", and the last time I tried pouring a bit of water on a spill resistant keyboard - see my Corsair K68 RGB review for the full story - it really didn't end particularly well.

Now, 60ml is a fair old dollop of liquid when you measure it out. Far from being a tiny splash, I reckon 60ml is about the amount of liquid you might spill from a significant jolt to your very full nearby drink. First off, I tried it with just regular tap water. After spilling it over the length of the keyboard, I plugged it back in, and it worked just fine. So far, so good. Then, after waiting for it to dry, I tried 60ml of Pepsi Max Cherry - Matthew's fizzy drink of choice - and lo and behold, it carried on working. Sure, the Pepsi Max left a more noticeable stain on the keyboard once it had dried, but consider me converted. 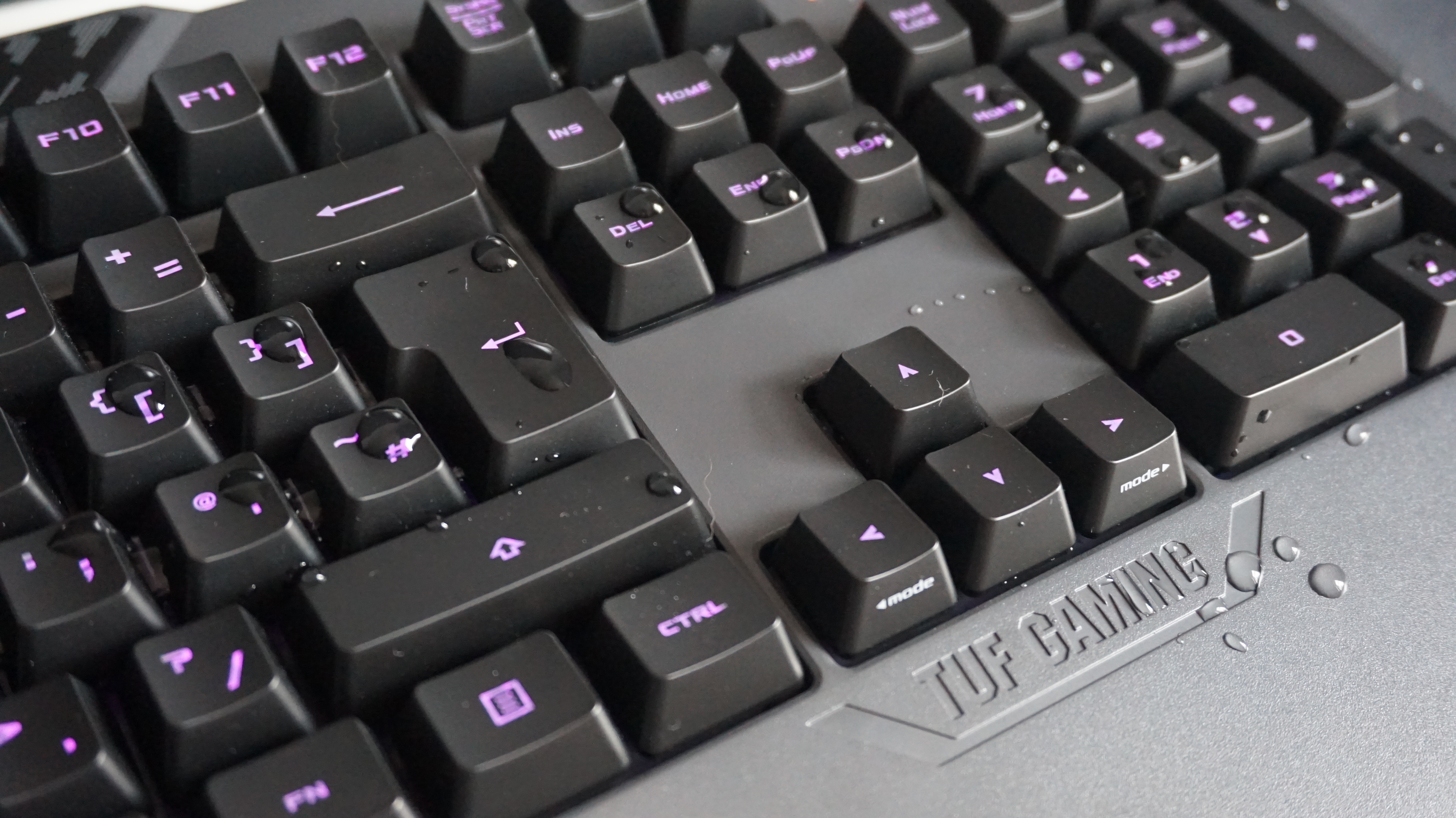 Of course, all this would mean nothing if the TUF Gaming K5 wasn't very pleasant to type on, but luckily this keyboard just keeps on hitting it out of the park. Asus' mech-brane switches are both sharp, crisp and tactile when you press them down, and they're not going to pierce everyone's eardrums if you start typing away in the company of others either. There's still a certain amount of CLACK to them, all told, but I reckon they're a lot more family-friendly than a full-blown mechanical keyboard.

Overall, they're probably closest in feel to Cherry's MX Brown switches, which have a small bump around halfway down the key press to give them that extra bit of tactile feedback. The general gaming keyboard hivemind often say these are the best kind of switches for those after an equal mix of gaming and typing use. While not as quick as the linear, gaming-friendly MX Red switches, they also don't require as much force as the louder, typing-friendly MX Blue switches, making them a good halfway house between the two.

Indeed, if you put a blindfold on me and asked me which keyboard was the K5 and which one was a Cherry MX Brown, I'd probably have a hard time telling them apart. This means the K5 isn't just a good first stepping stone to the world of full-blown mechanical keyboards - it's also good enough (in my books, at least) to replicate the entire experience of a mechanical keyboard without the need to spend buckets of money on it, which is good news for the more budget conscious keyboard hunters out there. 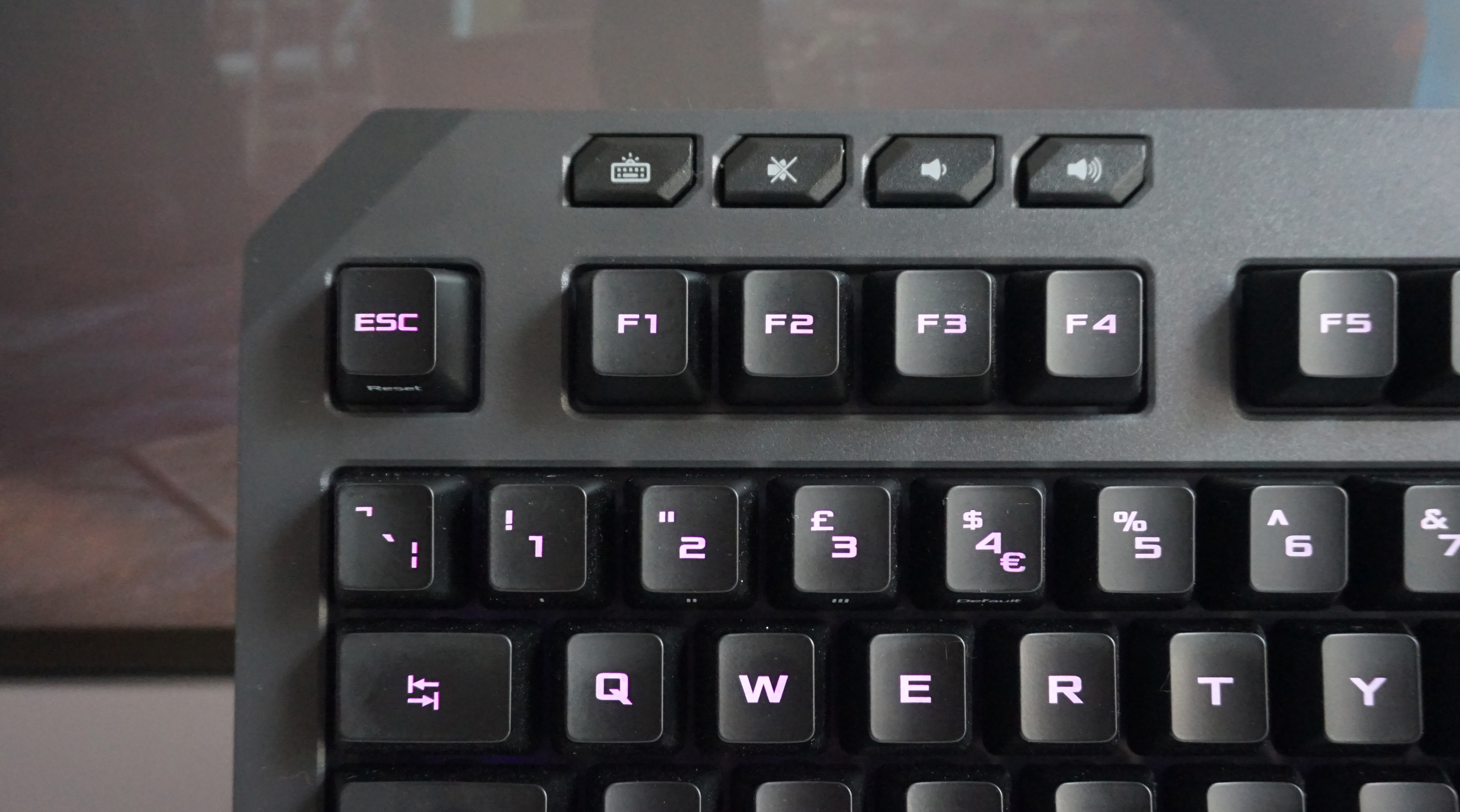 The K5 comes with a decent number of extra features, too, including dedicated volume keys and a button to change the brightness of its RGB lighting (or turn it off altogether). You can also record your own macro commands without having to load up Asus' Armoury software by pressing Fn and Alt Gr, as well as switch between its four available profiles by pressing Fn and 1-4. Asus' Armoury software isn't actually that bad to use, all told - and you'll definitely need to use it if you want to reassign any of its keys, tinker with its RGB settings or sync up your chosen lighting mode to other Asus AuraSync devices in your PC - but it's nice to have the option of bypassing it altogether for some of its more commonplace controls.

The only real hurdle you'll have to get past is the overall look of the thing. It's not too heinous, but I appreciate the dash of camo pattern and RGB TUF logo at the top of the keyboard won't be to everyone's taste. There's also the extra indented TUF Gaming letters on the right-hand side of the wrist rest, which luckily is too high to interfere with or grate against your palm, but may well still grate against your eyes depending on your preference for that sort of thing.

Still, design niggles aside, the Asus TUF Gaming K5 is a superb gaming keyboard for £69 / $80, and arguably a much better buy than the Roccat Horde Aimo for those looking to dip their toes in the mechanical keyboard pool. The Roccat still has some extra features that some may find worth the extra expense, such as its wider range of media controls and dedicated volume knob, but if all you want is a straightforward gaming keyboard that can stand up to heavy-duty use and you're not too fussed about what it looks like, the Asus TUF Gaming K5 comes highly recommended.