This is Playstyle Royale, where I head into Playerunknown’s Battlegrounds and try to win my chicken dinner while adhering to arbitrary rules. This week, I’m going with Godwhacker’s excellent suggestion in the comments from last time:

You’re allowed one kill with a weapon, but then it must be dropped, in order to outfox the Hampshire Constabulary who are fast catching up with you and your trail of murder. You can keep the usual four weapons in your inventory and switch between them, but each gun and any attachments must be disposed of after it’s been used, ideally somewhere it can’t be found easily. I’m also going to embrace my role and try to take out every player I see - I wouldn’t be much of a hunter if I didn’t. As usual, I’ve got five tries to reach the number one spot. Let’s get to it!

For my first game, I parachute down into my favourite central area that has a likely car spawn, along with two other people. I have time to grab a shotgun before I hear shooting in the room next to me, so I hide behind a corner as I hear the fight come to an end. Only one person is left standing, so I leap around and kill the victor while his back is turned. Heroic.

As he was using an identical shotgun to mine, I swap it out with my own. That leaves my murder weapon on...the victim’s corpse! It’s the last place the cops will think to look. I comb over the nearby buildings while I think that through, then return to the scene of the crime and hide my shotgun in a nearby bush instead.

I drive around in a Dacia for a while, before trying to run someone over who just shoots me out of my seat. Imagine I'd managed to flatten that person with the car though? It would have become a murder weapon and by the rules of the game, I'd have to dump it in a lake.

I start in Pochinki for my next round, though I land in a relatively quiet corner of town. I spend ages lurking on the bottom floor of a house, convinced that someone is waiting above me - but when I eventually go up and check, they were either never there or managed to leave at some point without me noticing. Some murderer I am.

A few minutes later, I spot someone running down a hill ahead of me. I dutifully follow the rules, despite not having a scope, and take a couple of shots with my AKM only to see my target duck away unharmed. I think I catch a glimpse of him going prone and sidling up to my position, so again I sit tight and try to wait him out. After a while I conclude that he must have left, but while I’m waiting I spot someone else at the top of the hill I just came from. I spend another age watching something that I’m convinced must be my new target, but in the end the regularity of the movement makes me realise that I’m hiding from some grass blowing back and forth in the wind.

A little later someone comes along in a car, gets out, and unceremoniously shoots me in the head. This is just getting embarrassing. 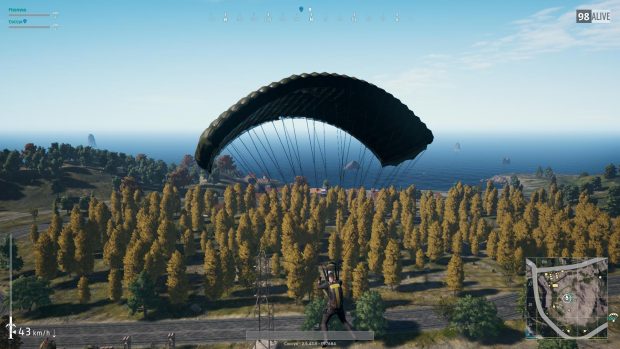 I recruit my friend Pete as a partner in crime, and once he’s up to speed on the rules we drop down into the same spot as before for the third match. Fortunately, this time we’re all alone. Less fortunately, the car that's usually in this spot hasn't spawned, so we have no choice but to run in between the school and some buildings to the north-east where we saw some people land.

We spot someone in Rozhok and chase after him into a building. Figuring he must be hiding upstairs, we make our way up but find nothing. Foiled again! We run on, but don’t manage to leave town before encountering another duo. They run towards us, and I somehow manage to miss two shotgun blasts in a row at point blank range.

I'm dead, but Pete gets revenge - only to die shortly after to the most yellow man I’ve ever seen in Plunkbat. His clothing would be a massive liability in any other setting, though you couldn't ask for a better get-up for ambushing people in wheat fields. 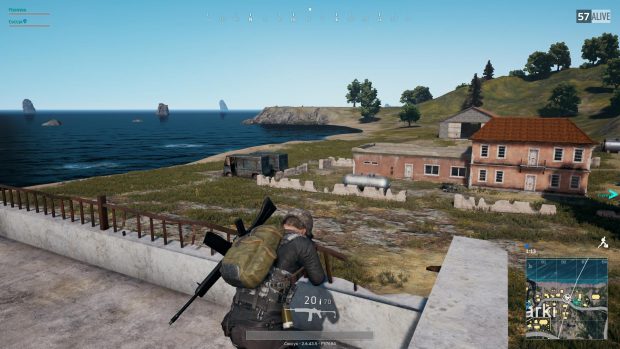 For the fourth game, we decide to land in the far north-western town of Zharki, which neither of us had ever been to before. There are beige trees! A playground! A mini-lighthouse! After so many hours of trudging across the same scenery, I can’t get over the novelty of being somewhere new. I wouldn’t have thought seeing a climbing frame could get me more excited about the upcoming desert map, but here we are.

We’ve gotten incredibly lucky with the circle of safety, and are somehow more or less already in the middle of it. That affords us the time for some thorough looting, and I end up with a Mini 14 and an 8x scope, while Pete finds himself similarly well kitted out. By the time we're done Zharki is no longer within the circle, so we head east until we spot a jeep parked up outside some houses. We get into position and wait for whoever parked the vehicle to return - and that’s when the server crashes. Oh well, at least we got a go on a jungle gym. 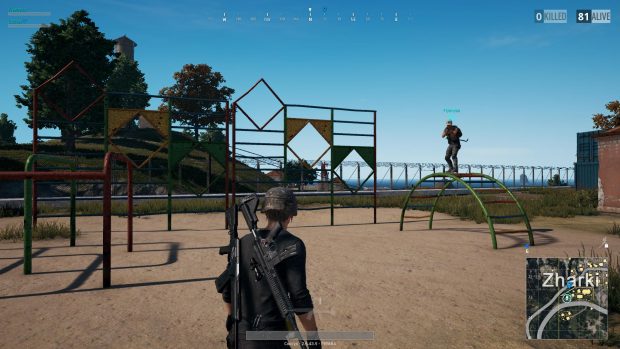 I’ll be damned if I’m counting that as one of the attempts, so we treat our next game as the real fourth effort. We land by ourselves next to some central houses that we’ve taken to calling our special place, and it lives up to its name, providing us with an assault rifle each. Ten minutes later, we’re searching through some buildings when someone pulls up outside in a Dacia. I lie prone in front of a door I reckon he’s about to run through, and sure enough I soon get the chance to welcome him with a hail of bullets. I chuck the AKM I used in the bin outside - or right by it, as for some reason the engine doesn’t actually facilitate burying weapons in the trash. I might be taking ‘dump the evidence’ a little literally.

We nab ourselves a Dacia, and aren’t driving for long before a jeep pulls out in front of us. We give chase and are lead through a cluster of buildings where both us and our quarry are ambushed by another group. The other car gets away, but Pete - perhaps also a little overly keen to run someone over - circles around and starts heading back towards them. He gets shot before we can collide with anyone though, and the car lists slowly to a halt a few metres from our attackers.

I lose half my health bar but manage to sprint into a tiny hut, heartlessly leaving Pete to be finished off in the field outside. My cowardice only gains me another 30 seconds of life: I’m injured and only have a Tommy Gun to defend myself with, so Pete’s murderer has no trouble putting me down with his shotgun. 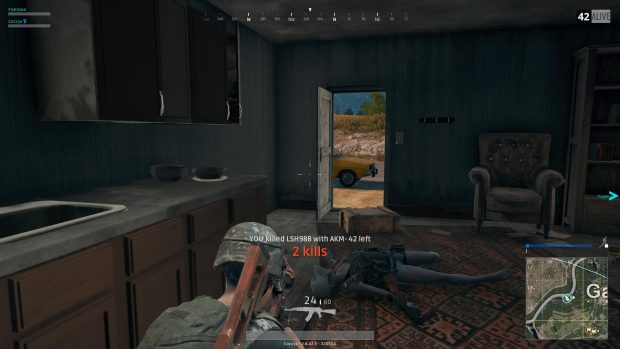 Pete scarpers after that, abandoning me as I abandoned him, and leaving me to face the fifth and final round on my lonesome. When I spawn in, I’m pleased to see that my screen is obscured behind waves of drizzle. I’m a sucker for a good in-game rainstorm, and Plunkbat’s don’t disappoint.

I parachute down into the shooting range, and this time I’ve got company. It’s only one guy, but he beats me in a race to a picnic table with a SCAR on it. I’m forced to flee down to the to the end of the range, where I find nothing but a helmet and a can of pop.

As I creep back to where I thought he’d landed, I’m surprised to find an M16 and a Kar98k. I use the former to take a shot at the chap with the SCAR, but miss - though I don’t think he spots me. I slink around to the side of his position and a ridiculous 60 seconds follow where I repeatedly try and fail to jump over a concrete wall - vaulting can't come soon enough - while my quarry miraculously keeps his back toward me.

Eventually I give up, and just crouch behind a bit of concrete. As if rewarding my lack of persistence, he then starts running directly towards my spot - I rotate around my concrete so that I stay out of sight as he moves by, then shoot him in the back. I dispose of my M16 in a nearby burning car… sort of. 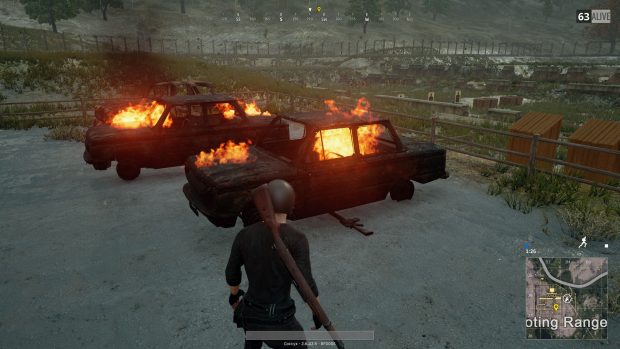 I find a Dacia on a road just to the north, so drive around looking for trouble. I don’t find any, until I enter a seemingly unlooted house and encounter someone who was camping inside. This week’s Royale ends not with a whimper from inside a bush, but a bang from an unseen shotgun.

Despite over a hundred hours of plunking, I think this might actually be the first time I’ve died to someone who fooled me into thinking a place was safe. Remember kids: always close the door behind you.

If you’ve got a suggestion for my next Playstyle Royale, pop it in the comments below.