A number of Blizzard employees seem to be protesting the company's decision to ban a professional Hearthstone player for voicing his support of Hong Kong's ongoing pro-autonomy protests. Some have reportedly covered up two of the company's supposed core values that are cast in bronze in a sculpture outside their headquarters, "Think Globally" and "Every Voice Matters". It seems more later gathered in support at the statue, carrying umbrellas, a symbol of the protests.

Blizzard banned player Chung "Blitzchung" Ng Wai for one year and cancelled his prize money for saying "liberate Hong Kong, revolution of our age!" in a post-match interview on Sunday. They pointed to the section of the rule book which forbids "any act that, in Blizzard's sole discretion, brings you into public disrepute, offends a portion or group of the public, or otherwise damages Blizzard image." They also cut ties with the match's two commentators.

Hong Kong is part of China but governed with autonomy, which often causes friction with the mainland. The latest series of protests were sparked by a proposed extradition law which many feared would give China too much power over Hong Kong. It's claimed over a million people joined in some rallies. The protests have been met with violent resistance from police, and that itself fuelled further protest. Here's a brief BBC primer if you want it.

China frowns greatly on people and companies supporting the protests. Only last week, an NBA basketball team manager tweeted support for protesters and, in response, state TV channels said they would stop broadcasting games. Blizzard are likely fearing similar reprisals against their own games and sporting endeavours.

Not everyone at Blizzard, apparently. Former Blizzard esports lad Kevin Hovdestad tweeted yesterday that some Blizzardeers have (very politely) defaced the company's public declaration of values on a statue outside their headquarters. The statue, which was manufactured in China, depicts a wolf-riding Orc warrior encircled by a compass declaring Blizzard's eight "core company values."

Not everyone at Blizzard agrees with what happened.

Both the "Think Globally" and "Every Voice Matters" values have been covered up by incensed employees this morning. pic.twitter.com/I7nAYUes6Q

While Hovdestad doesn't say who's responsible (for obvious reasons), I'd trust him as a source considering he worked there.

The core values covered up yesterday are, in full:

Every voice matters
Great ideas can come from anywhere. Blizzard Entertainment is what it is today because of the voices of our players and of each member of the company. Every employee is encouraged to speak up, listen, be respectful of other opinions, and embrace criticism as just another avenue for great ideas.

Think globally
Everywhere on the planet there are people who play Blizzard Entertainment games. While respecting the cultural diversity that makes people unique, we strive to grow and support our global gaming community. We also seek the most passionate, talented people in the world to enrich our company and help us forge the future vision of Blizzard Entertainment.

Later in the day, a pseudonymous Reddit user claiming to be a Blizzard employee (known only as "Standingwhk") posted a photo they said was of "Blizzard employees standing with [Hong Kong]". It shows two dozen people, several with umbrellas, gathered at the Orc statue. Umbrellas are a symbol of Hong Kong resistance movements, having started simply as tools to protect against police pepper spray. 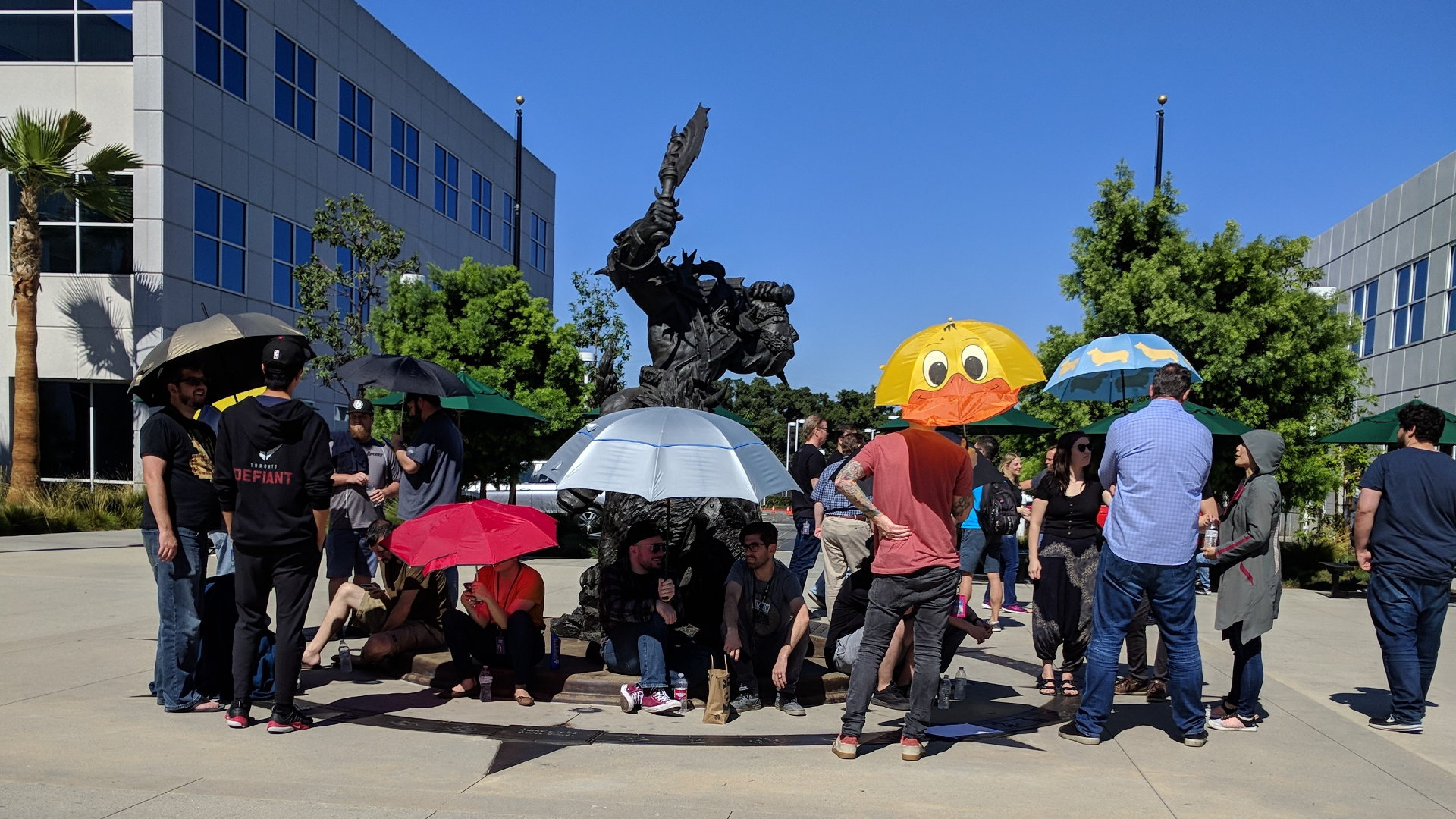 While I can't verify the identities of the Reddit poster or the assembled people, that clearly is Blizzard's wolfman and one compass point is visibly covered by paper.

The Guardian report that Blitzchung stands by his words.

"I don't regret saying that stuff. And even now, I don't regret it at all," Blitzchung said. He did say it was "a pity" to face this after four years in digital sports.

"I sacrificed time hanging out with my friends and studying because of this competition. Even though it seemed that I had wasted four years of time, I have something more important in my heart – if we lose the movement, Hong Kong will end forever."

Players have protested Blizzard's response. A team in Hearthstone's official Collegiate Championship yesterday held up a sign supporting Hong Kong protestors and calling for a boycott of Blizzard. The company seem to have wiped this from their stream archives but hey, this is the Internet so (thanks to swift backeruppers) we can still see it right here:

I'm sure this isn't the end of things.