I'm going to tell you about the time my Bomber Crew accidentally dropped a food parcel on Birmingham. But first, a tragic tale.

A spitfire has gone down somewhere in the English Channel and it falls to my crew to rescue the pilot who is bobbing around in the water. We'll need to fend off enemy fighters while dumping survival packs into the water in the pilot's vicinity, but I'm new to this Bomber Crew lark and oh no one of our wings is on fire, and I think our plane is going into the drink. At least the spitfire pilot has some wreckage to cling to. Job done, I guess?

Bomber Crew is a bit like FTL. Not a great deal, but a bit.

If you've played FTL, you'll know how stressful it can be when a bit of your spaceship bursts into flames. It's a bad thing on several levels. Primarily, that ship is the only thing between your crew and the big horrible deathzone that scientists call “the great big vacuum in the sky”. Bomber Crew looks as cute as a button, with its bobble-headed people and colourful liveries. It's war by way of Nintendo's Mii characters and I spent enough time in the two tutorial missions and poking around my airbase that I'd been lulled into a false sense of security by the time everything burst into flames. 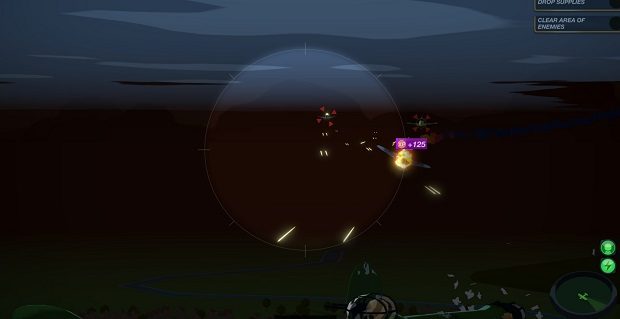 As the bullets shredded the paintwork of my plane and the first bouquet of flames bloomed into life, I felt like I was watching Sesame Street burn down or seeing a pile-up involving the Magic School Bus. It was like the time my sister convinced me to throw some of my Lego figures onto the bonfire when I was a few years old, just to watch them burn. I regretted it immediately but couldn't look away as Luke Skywalker bubbled down into a puddle of yellow pus. Bomber Crew convinced me I was playing with childish things and then it tore my wings off and sent my jolly little crew spiralling into the sea.

Lesson learned, I restarted the mission prepared for the chaos of conflict. We didn't end up in the water on the second attempt; we ended up somewhere far worse – Birmingham.

I've only played for a couple of hours, but as far as I can tell Bomber Crew requires two distinct skills. You need to be able to multi-task, paying attention to what's happening outside the plane as well as what's happening inside the plane, and you need to be good at prioritising. Is it more important to tag the incoming fighter planes or to correct your course? Can you afford to keep your bombs in the bay on this particular run while you concentrate your attention elsewhere, or would it be better to take a few hits while ensuring you dump your load? 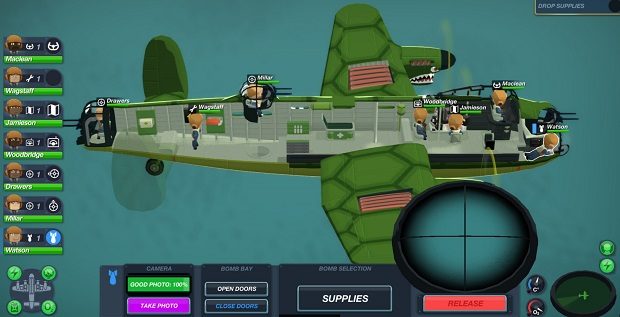 None of the things that you have to do are very complicated. Sure, flying a plane and navigating said plane while also operating the radar and repairing any damange might seem like complicated tasks, but as the all-seeing overlord of your bomber crew, you just need to click on a person and then click on the area you'd like them to attend to. If the area is on fire, they'll try to extinguish that fire, if it's a gun and they're a gunner, they'll hop into position and fire on any fighters that you've spotted and tagged.

It should be simple, but it isn't because fighters come from every direction and you need to click into spotting view to tag them, and then you get a message telling you that the electrical systems have been knocked out so you need to click into the other view and zoom in to direct somebody to carry out repairs. I've only played the first few missions of what looks like a fairly brief but replayable campaign, and things aren't horrifically hectic just yet, but I still managed to visit Birmingham by mistake.

I can explain. We'd reached the pilot and as we prepared to drop supplies nearby, six fighters came swooping in from the clouds above. There are three guns on the bomber and I had two gunners in place, so we had coverage everywhere except to the front. That's because the person responsible for peering out of the plane's bottom as you target bombing sites is also the person who controls the front gun. I'd ordered her into bombing position, in readiness to drop the supplies, but I quickly reassigned her to the gun as the fighters approached.

That meant we passed over the stranded pilot without dropping any supplies because nobody was in position to do so. But it also meant we were unleashing hell on the fighters swarming around us. Imagine my surprise, then, when our entire plane fell apart. The radar broke, then two of the guns ran out of ammo, and then I had to send someone out onto the wing with a fire extinguisher. I say had to but I'm not entirely sure it was necessary or even useful, but I did it nonetheless.

During the chaos of fire-fighting and fighter-firing, I made a fundamental error and I hope that you will learn from my mistake. Here is the lesson and pay very close attention: if a plane is pointing in one direction it will continue to travel in that direction until somebody deliberately tells it to do otherwise. Planes are not intelligent creatures in their own right and they do not know where you want them to be.

I knew where I wanted the plane to be. I wanted it to be circling around the drowning pilot. I wanted it to be in the vicinity of that pilot for the forseeable future, while I tended to the small matter of ensuring the entire apparatus didn't fall out of the sky. The plane did not know that I wanted it to do anything except to fly forward forever though, and the reason it didn't know is because my navigator was the person trying to extinguish the fire on the wing.

Without a navigator in position, Bomber Crew does not allow you to redirect your plane. You never have direct control, simply tagging new waypoints as the navigator plots a course. Nobody was plotting a course for our bomber though, so we flew far away from the pilot, with enemy fighters still in pursuit.

As soon as I realised what was happening, I sent the navigator back to his seat and a chirpy moustached chap informed us that we were approaching Birmingham. I hadn't realised we'd left the Channel. Truth be told, I thought we were a few metres away from our objective at most. More like a couple of hundred miles.

The enemy fighters were still following, though we'd shot most of them down which seemed like a small victory. I don't feel fantastic about leading the rest toward one of the biggest cities in England, but they're fighters, not bombers, so I doubt they can do a great deal of damage.

As an apology of sorts for leading baddies to their city, I dropped the supplies intended for the pilot onto the streets of Birmingham. I hope there's some chocolate and spam rather than a flare pistol and some inflatable armbands.

I'll return to Bomber Crew, partly to prove to myself that I'm not the worst planesman in all of history, but also because it seems like a splendid game. There's serious business beneath the playful paintjob, but not so serious that I can't enjoy my mistakes. If you'd like to deliver much-needed supplies to the good people of Birmingham, Bomber Crew is available right now on that there Steam.