In yet another show of words, Activision and Infinity Ward have updated Call Of Duty: Modern Warfare with a new loading screen proclaiming Black Lives Matter. This follows two other attempts to show support for those protesting the death of George Floyd and police violence in the United States and around the world that disproportionately affects Black people.

Our community is hurting.

The systemic inequalities our community experiences are once again center stage. Call Of Duty and Infinity Ward stand for equality and inclusion. We stand against the racism and injustice our black community endures. Until change happens and Black Lives Matter, we will never truly be the community we strive to be. 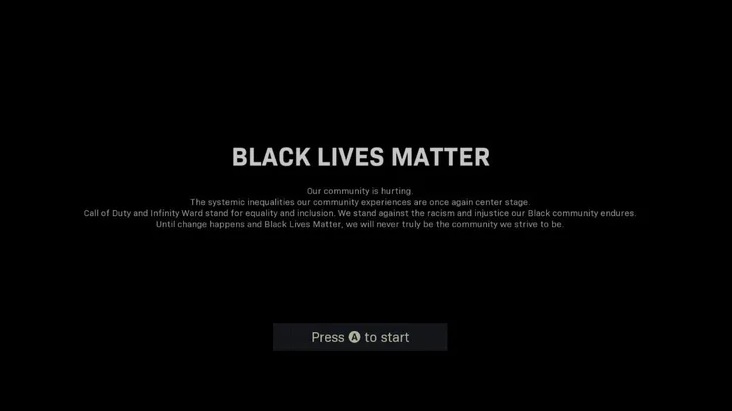 So far, Call Of Duty has delayed its new season, saying that "now is not the time." Infinity Ward have outlined plans to crack down on racism in Call Of Duty from additional filters to permanent bans for repeat offenders, but I'll hold off praising them until we see the actual fruit of those efforts.

In the meantime, something more tangible than words would be a better show of support—something more similar to the $2 Million that Activision donated to the Call Of Duty Endowment during Military Appreciation Month in May. Perhaps given to bail funds that would help release Black Lives Matter protesters from jail in Activision Blizzard's home city Los Angeles.

I get that military charity is more in line with Call Of Duty's theme, but it's hard not to notice which causes deserve money and which just get words.