Assault rifles are by far the most versatile and numerous weapons class in Call of Duty: Warzone. They are reliable, effective at any range, and the backbone of the vast majority of Warzone loadouts out there.

Our guide to the best AR in Warzone will walk you through the stats and relative power of all the Assault Rifles in Warzone Season 4. Here’s all the assault rifles in Call Of Duty: Warzone, and how good each of them are in the current meta.

The best Assault Rifle in Warzone Season 4 Reloaded is the FARA 83. The massive balance update in Season 4 Reloaded made many top Assault Rifles require an extra bullet or two to kill in many situations. The FARA's damage took a hit too, but not enough to matter. Here’s an up to date stats list for Warzone’s assault rifles:

Now, it's time to break down every AR in Warzone from best to worst. We’ve got plenty to explore here, so let’s get to it.

The FARA 83 has survived yet another nerf in Season 4 Reloaded. While its maximum damage per round was reduced, it wasn’t enough to actually change the number of body shots required to kill. The recoil increase was very modest, so the FARA remains easily controllable. It's going to take more than this to knock the FARA 83 out of the top spot.

Check our FARA 83 Warzone loadout guide for more info on it.

The Krig 6 was one of a few weapons to catch a slight buff in Season 4 Reloaded. This highly accurate rifle has never had great damage output, but now most other options have been brought down to its level. The Krig’s recoil is practically nonexistent, which makes it more reliable and consistent than many of the other Assault Rifles that now have similar times-to-kill. This will be a very powerful, popular choice in the new meta.

If you want to deck out the Krig 6 properly, check out our Krig 6 Warzone loadout guide here.

The C58 had its body shot multipliers completely removed, which knocked its body shot only time-to-kill down from best in class to fairly average. However, it still has great range and a huge headshot multiplier. If you can land a headshot, the time-to-kill is great. If you hit two, it's fantastic. The average player will likely find more success with the Krig 6, but if your shot is on the C58 is best in class.

If you want to try this new toy out, take a look at our guide to the best C58 loadout.

An AK-47 that's actually good in Warzone. Rejoice! The Cold War AK has a great time-to-kill close up even after nerfs, and still has a manageable recoil pattern. You can use it as a mid- to long-range gun, but the close-range build makes the Cold War AK-47 one of the strongest sniper supports in the game.

We have a handy guide for each way to build this gun in our Warzone Cold War AK-47 loadout guide.

The CR-56 AMAX has seen nerf after nerf over the past year, yet it remains a solid long-range Assault Rifle in Warzone. Like many other Assault Rifles, the midseason patch makes it take roughly an extra bullet to kill in most situations. That hurts on a slow-firing weapon, but the time-to-kill is still good if you can land a headshot. The AMAX is finally out of the top two or three rifles, but it’s still a good option.

If you’re wondering how to kit this gun out, check out our guide for the best CR-56 AMAX loadout in Warzone.

Since its release, the AS VAL has been near the top of the time-to-kill charts. This gun absolutely shreds but is unfortunately held back by its tiny 30-round magazine, which it burns through in the blink of an eye. The AS VAL also lacks the mobility of the Cold War sniper support ARs, a theme with the Modern Warfare weapons. Still, it went untouched in the Season 4 Reloaded patch, so the damage gap between it and other rifles has only grown. If you’re playing solos or duos where the small magazine is less limiting, the AS VAL is extremely powerful.

The AS VAL is a personal favorite despite its shortcomings, so I definitely recommend you check out our AS VAL Warzone loadout guide and give it a try.

The QBZ has had its poor damage improved slightly, but lost some of the excellent mobility that made it an interesting, if bad gun in the past. Still, that damage was much needed. The QBZ is now a competitive long-range option, though not quite top tier. If you've never used it, now is a great time to give it a try.

If you're a first time QBZ user looking for build options, check out our guide to the best QBZ loadout here.

The classic M4A1 saw a slight nerf to its close-range damage, along with a compensatory buff to its long-range damage in Season 4 Reloaded. The adjustments were so minor that the time-to-kill won’t actually change in most situations. With heftier nerfs bringing many other weapons down to the M4’s level, I think this old standard will start to creep back into the Warzone meta.

Why not use our M4A1 Warzone loadout guide to help you out?

The Grau is another Assault Rifle in the “everything else got nerfed down to its level” category. This weapon has been an absolute laser beam since it released. The damage is low, but the gap between the Grau and the top dogs has become significantly smaller. With how easy the Grau is to keep on target even at extreme ranges, it should perform well relative to its nerfed competition.

Check out exactly how to kit this gun out with our Warzone Grau 5.56 loadout guide!

The Groza has had its damage reduced in line with the other Assault Rifles, but it also had an early horizontal hitch removed from its recoil pattern. The time-to-kill on the Groza has always been solid, and now it’s a bit easier to use. There are still better options at long range, but I think the Groza can be a really good sniper support right now.

Those of you looking to try it out and shred enemies, give our Groza Warzone loadout guide a read.

The XM4 has really been through the wringer over the past month. A pair of buffs briefly made it a strong option both up-close and at long range, but the most recent midseason damage nerfs hurt its time-to-kill. It also caught the worst of the recoil tweaks. The XM4 should still do all right as a sniper support with the superior mobility of Cold War attachments, but there are better options at longer ranges now.

If you still want to give it a shot, check out the best Warzone XM4 loadout guide.

The FFAR finally had its reign of terror ended after a series of nerfs. However, it’s still no slouch, continuing to boast a really strong time-to-kill if you’re okay with its recoil pattern and reduced mobility. It actually has some of the best long range damage output in Warzone right now - it's just harder to keep on target than the competition. If you loved the old FFAR though, I'd give it another shot. You may find it's due for a comeback.

If you need a refresher, have a look at our Warzone FFAR 1 loadout for more.

While the RAM-7 lacks the mobility to compete with the Cold War sniper support Assault Rifle builds, it's still one of the better Modern Warfare options. The time-to-kill is solid at most ranges, though it doesn't currently stand out. Still, if you can manage the recoil and stick to more mid-range engagements, the RAM-7 is a decent choice.

If you’re interested in running another Modern Warfare classic, check out our RAM-7 Warzone loadout guide.

The M13 has always felt like a bit of a squirt gun at long range, but a slight buff to its minimum damage may help. Its recoil is low and its rate of fire is excellent. Even with the poor damage per shot, the M13 should be able to put enough rounds on target to compete with some of the nerfed options. If you want the accuracy of the Krig and Grau on something that can put more rounds down range, the M13 is a respectable choice.

With the Kilo 141, you’re getting a similar amount of utility as the Grau and M4A1, but with lower damage at the longest ranges and a different recoil pattern. With its long time-to-kill, the Kilo isn't a good choice right now. It does have one advantage, however; a 100-round magazine option. Overall, though, it isn’t good and it looks ridiculous.

If, however, you are looking to build a good version of this gun, our Kilo 141 Warzone loadout guide is here to help.

Though its time in the sun is long over, the FAL remained a decent choice if you could hit a couple of headshots due to an enormous headshot multiplier. Now that multiplier has been significantly reduced. I don’t think the FAL is bad necessarily, but it feels hard to justify over a DMR-14 right now.

This is a personal favourite. The Oden is a big time Marmite gun, and some people absolutely despise it. However, with its slow fire rate and ridiculous damage per shot comes a gun that can completely ruin enemies when you catch them trying to run somewhere. As long as you’re aimed already, the Oden chunks them down like no other, and it’s so satisfying to pull off once you master it.

The Scar hits like a truck but continues to struggle to find a niche in the Warzone meta. High recoil holds it back over long-range, mobility holds it back up close, and a 30-round maximum magazine size cripples it everywhere. Even inside its best effective range, a Cold War AK-47 will kill faster with a bigger magazine and better mobility. There just isn’t much reason to run the SCAR.

If you wanted a standard assault rifle, look elsewhere. The AN-94’s ‘hyperburst’ feature is its pièce de résistance, firing off its first two shots at an outrageous rate. If you can consistently land the hyperburst, the AN-94 does all right at close-to-mid-range. If you can’t, it falls well behind the competition. The AN-94 has one of the shortest ranges before its damage drops off among all Assault Rifles. The AN-94 isn’t exactly the worst gun in Warzone, but it’s not particularly good.

We have a best AN-94 loadout, so have a look and see if this gun is the off-beat pick to help you break the meta.

The Modern Warfare AK has always struggled with a really bouncy recoil pattern. Sure, it feels great when you can get kills with it, but the reliability just isn’t there. The damage drop-off over range is also absolutely brutal. This one isn’t good for much other than a change of pace.

"Maybe burst guns are good now", I hear you say with regards to former the dominance of the AUG and M16 in Warzone. Alas, this is unfortunately not the case with the FR 5.56 assault rifle. This gun just feels left behind in the current Warzone meta. Personally, I suggest you avoid it. 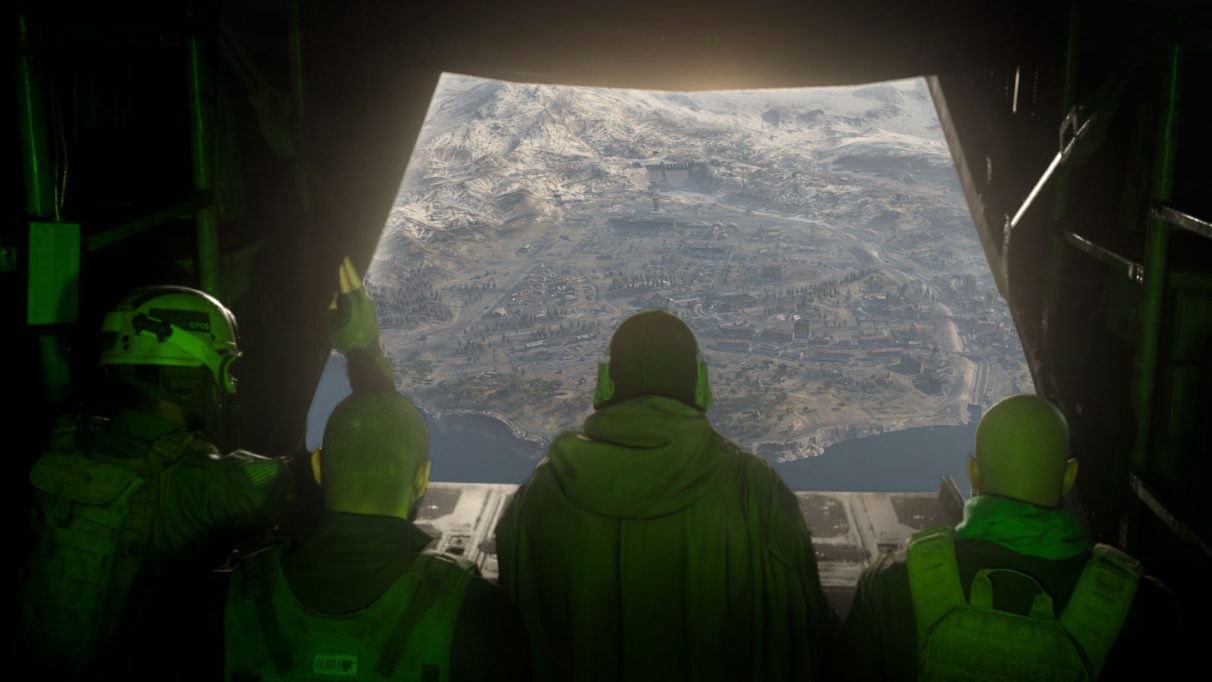 And there you have it! Hopefully now you're a master of the Warzone Assault Rifles arsenal, and you're ready to put your newfound knowledge to the test. But in case you're still hungering for tips and stats, be sure to check out our other Warzone guides! We have tips on all sorts, from the best sniper rifles to all the war tracks in Warzone to play in your truck.