There are two types of ray tracing games that have emerged over 2019. On the one hand you've got your big, bombastic feast-for-the-eyes type games like Minecraft RTX, Control and Metro Exodus, and on the other you've got your subtle, squint-and-you-miss-it jobs like Battlefield V and Shadow of the Tomb Raider. Call of Duty: Modern Warfare and its ray traced shadows fall squarely into the latter camp, although at least its campaign has the added benefit of taking place mostly at night so you can be doubly sure you don't miss them.

But what exactly does Modern Warfare's RTX support add to the game, and is it worth switching it on if it means taking a hit to your PC's performance? In my Modern Warfare RTX guide below, I'll take you through exactly what Call of Duty's ray tracing looks like, as well as what kind of performance you can expect to see across all of Nvidia's RTX graphics cards.

Unlike Control's RTX options, Modern Warfare only has a single setting for its ray tracing support, and you'll find it buried deep in the Shadow & Lighting section of the main Graphics menu. 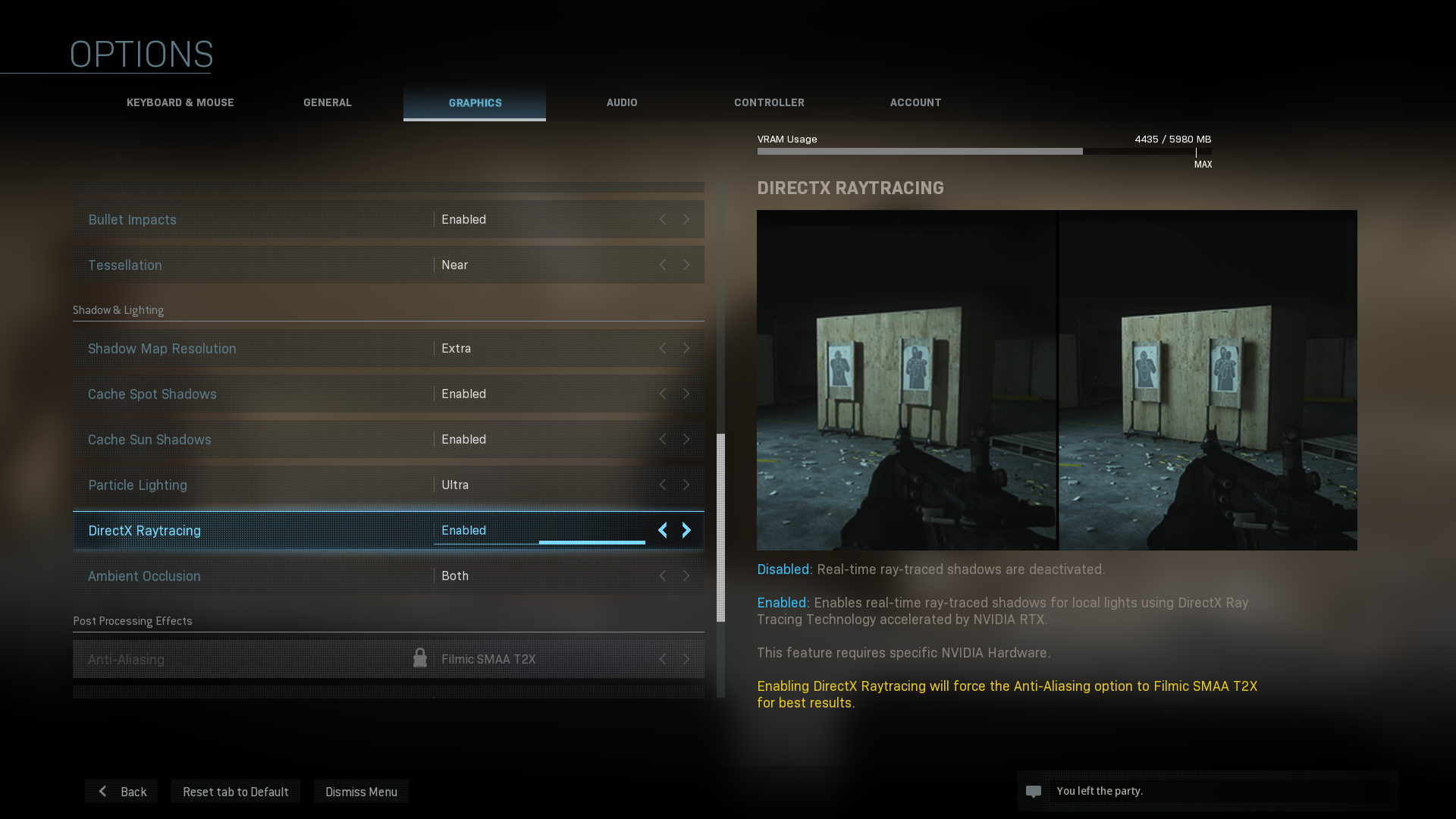 As you can see from the screenshot above, it's either 'Enabled' or 'Disabled'. There's no additional shadow settings like Shadow of the Tomb Raider's RTX options, changing the intensity of its ray tracing. Just a simple On or Off switch.

In some ways, that makes things much easier. Instead of spending ages faffing around with the settings trying to find which level of ray tracing your PC can handle without exploding, it's simply a case of "Can my graphics card do it or not?". As I mentioned above, however, it's pretty damn subtle a lot of the time, and I struggled to find bits of its campaign where I could see a visible difference in the quality of its shadows. Have a look at the screenshots below to see what I mean.

Here we've got the opening of the campaign's second level, which is set in London's Piccadilly Circus. I thought, 'Brilliant, lots of lovely lights and shadows here, let's see what this thing's made of.' Cue a lot of peering at my monitor and double/triple-checking of the graphics settings menu to make sure I'd actually switched it on properly.

Another scene from that same level left me similarly unimpressed.

Apart from the obvious immersion-breaker that is that diamond-shaped Tube sign, there's even less of a difference here than the first set of screenshots. I was expecting the lamp shadows to change, the railing shadows to become realistic, something that would make it look more realistic than having RTX switched off.

Finally, I found it:

Doesn't that just want to make you cut your PC's performance by 15%?

There was, admittedly, a much better example I found in one of the nearby bookshops in the Piccadilly level, but even then I'm not sure I'd really care and / or notice any of it when I'm scrabbling around trying not to get shot in the head all the time.

Yep, the best example ray tracing I could find was a slightly more authentic looking armchair and accompanying plant. And that statue by the front door, let's not forget that, either. Still, while all these bits of furniture might look more realistic when you look at them side by side, I found there was simply too much going on in the various campaign levels for me to really stop and appreciate it all. At least Battlefield V had the added bonus of catching the odd explosion rip through a puddle on the floor every once and a while. This, though, doesn't really look hugely different to having no ray tracing at all.

The good news, though, is that you might as well switch ray tracing on in Modern Warfare, as Infinity Ward, Beenox and Nvidia have all done a remarkable job getting it to run nice and smoothly. Even on a regular RTX 2060, for example, I saw average frame rates well above 60fps on max quality settings with ray tracing enabled, and that was at both 1920x1080 and 2560x1440. As a result, those with higher-end RTX cards will be absolutely laughing at these resolutions, and the only area where I really struggled to get a consistent 60fps was at 4K. For that, I needed at least an RTX 2080 Super, if not an RTX 2080 Ti just to be sure.

Of course, without the aid of a proper benchmarking tool, I was only able to take rough estimates using the game's built-in frame rate counter. As a result, the following figures may vary a bit from level to level, but in the Piccadilly level at least, I recorded the following minimum and maximum frame rates for my standard RTX 2060 card.

That's really not bad for Nvidia's entry-level ray tracing card, and it's definitely a lot more impressive than what EA managed with Battlefield V this time last year. As you may recall, Battlefield V's ray tracing support incurred a pretty big performance hit when its RTX reflections were enabled, making it difficult to run at a smooth enough frame rate on an RTX 2060, even at 1920x1080.

As a result, I'm actually not that bothered that Modern Warfare's RTX stuff doesn't make a huge amount of difference to the overall look of the game. Unless you've got a high refresh rate monitor, the actual impact on your PC's performance is pretty minimal, so you may as well have it turned on, even if you can't really tell where it's making a difference.

So stay frosty, RTX owners. Modern Warfare might not be as impressive as Control or Metro Exodus, but at least it won't one-hit KO your PC when you try and run it.