If you click on a link and make a purchase we may receive a small commission. Learn more.
Developer: Pyro Studios, Yippee! Entertainment
Publisher: Kalypso
Release: Out now
On: Windows
From: Steam, GOG
Price: £17

When you send your Renoir nude off to the restorer for a spruce-up there's no danger it will return with the nipples painted out because the restorer thought they might cause offence or arousal. Things work a little differently with computer games it seems. Much-loved isometric sneak-em-up Commandos 2 has come back from refurbishment missing a few aesthetic details. German flags have shed their swastikas, Hinomarus have disappeared from the wings and fuselages of Japanese aircraft, and footage of vile misery-monger Adolf Hitler has been cut from the intro cinematic. The edits plus a host of bugs and shortcomings explain the game's less than rapturous reception and the waspish words about to waft from my word piano. 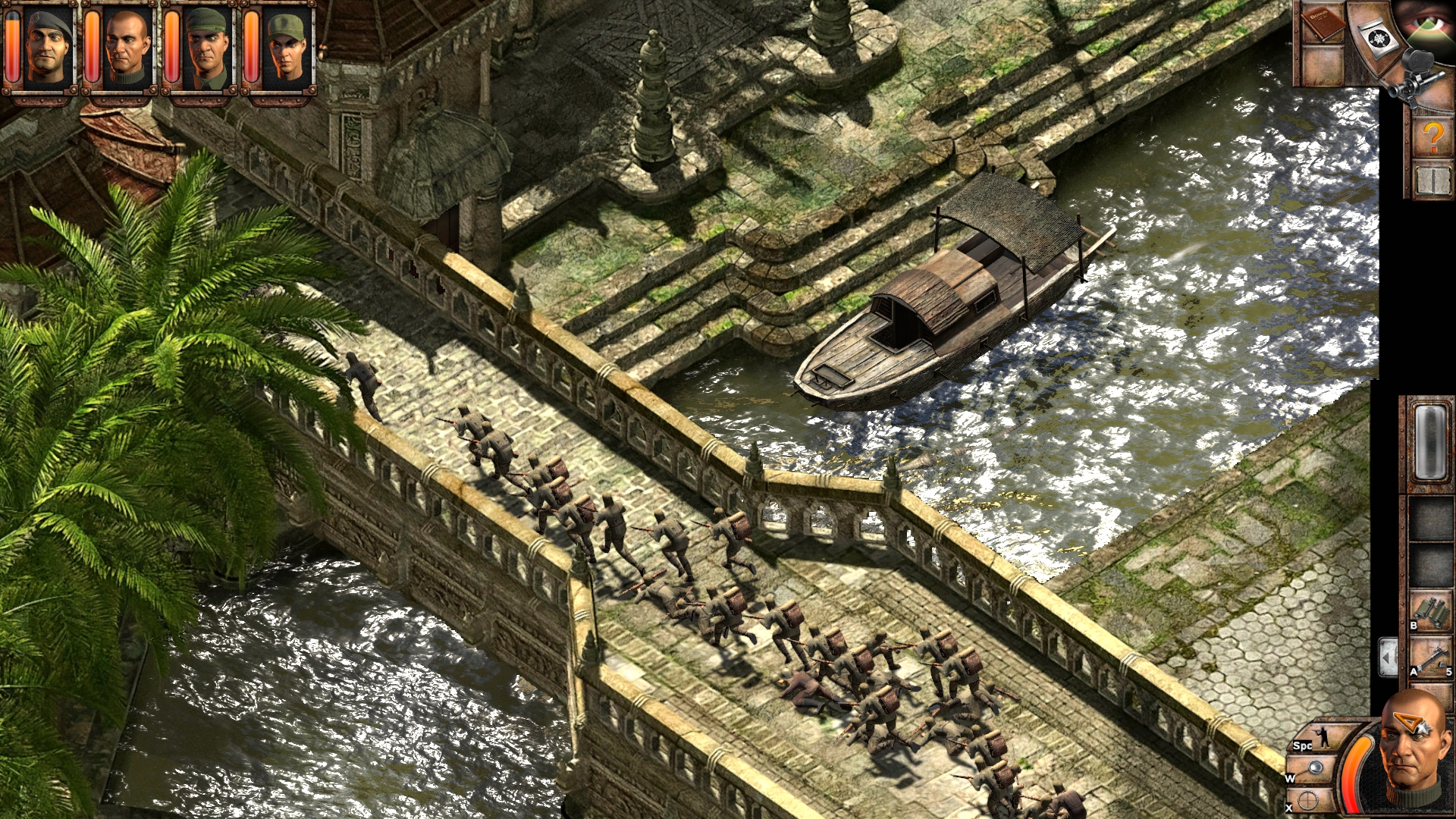 Kalypso's attempt to explain the bitmap alterations has probably riled more purchasers than it has placated:

“We have consciously decided to release only one global version of Commandos 2 HD Remaster, one which as far as possible avoids the use of political symbols such as Swastika or SS-runes. We do not want to encourage racism, discrimination or exclusion with our games. As a cosmopolitan but German company, we see it as our duty to refrain from any kind of radical symbolism.

We really do not believe that avoiding extreme political symbols diminishes the fun or authenticity of our games and we feel that this attitude is supported by a large part of our community.

We know that this decision won’t be shared and agreed upon by everyone and we appreciate your own opinions, but hope that you can accept our standpoint.” 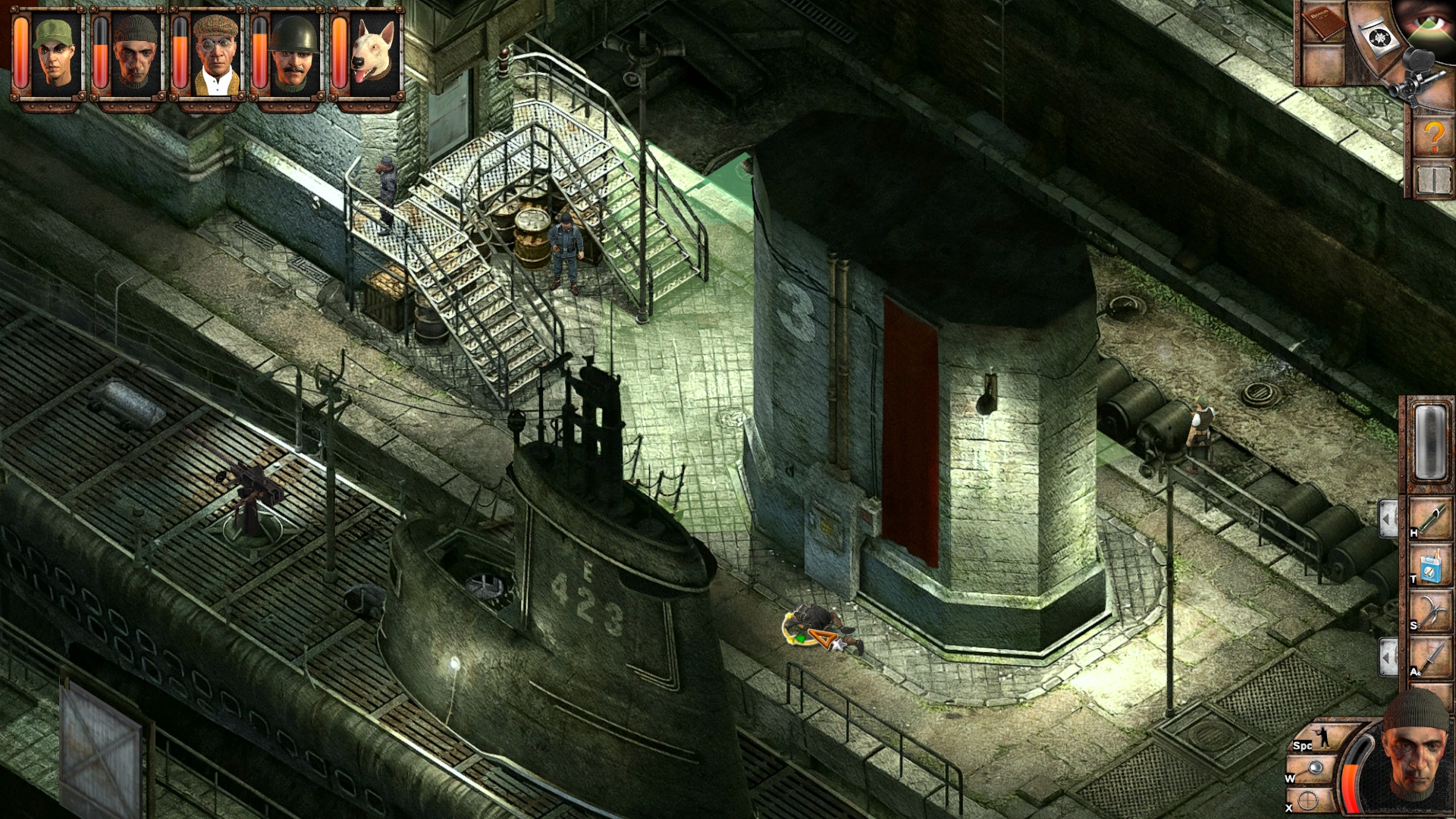 As many have pointed out, removing “extreme political symbols” such as swastikas from a game as thoroughly steeped in WW2 as C2 can't fail to diminish authenticity. The fact that German judges now take a more nuanced view of fascist logos in games, that Pyro used Nazi iconography sparingly back in 2001, and Kalypso is perfectly happy to sell titles that cast players as energetic Großgermanisches Reich enlargers like Guderian and Bock, makes the publisher's position seem even shakier.

If you're a history buff there's a world of difference between this image: 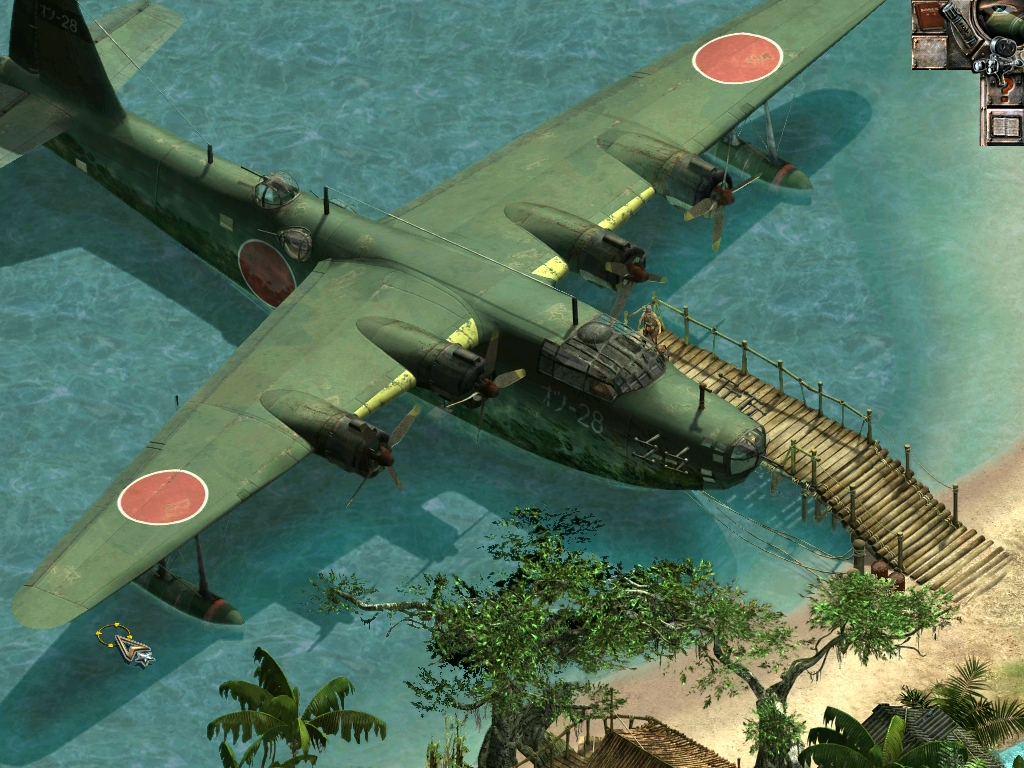 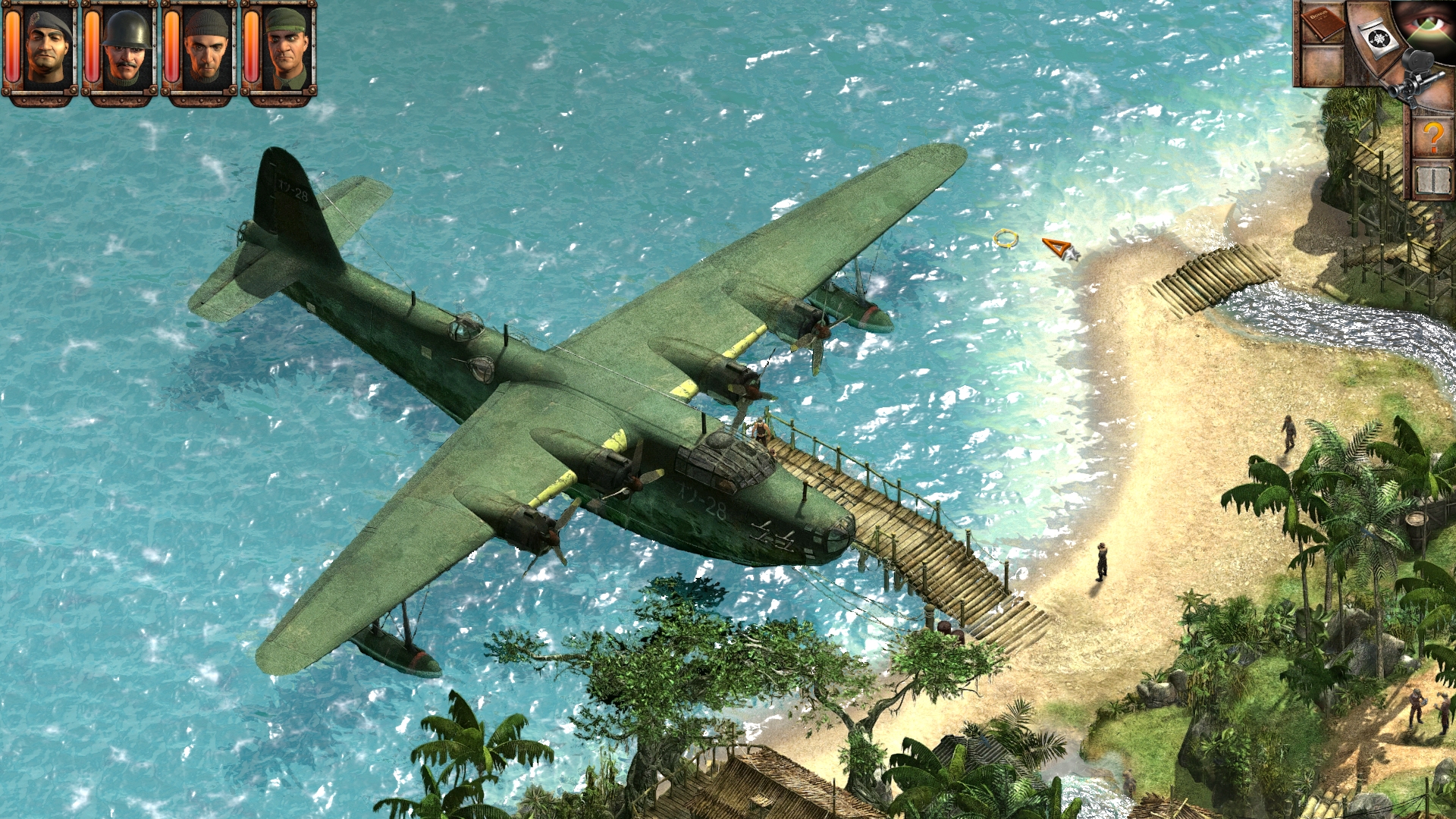 The original Emily buttresses the illusion, the roundel-stripped HD one undermines it.

While the feelings that inspired the excisions are commendable, and, yes, the changes have negligible impact on C2's ability to furnish fun, I stand with those arguing that the censorship was a mistake. Commandos 2 is a strategy heirloom and heirlooms deserve to be handled delicately by their conservators. 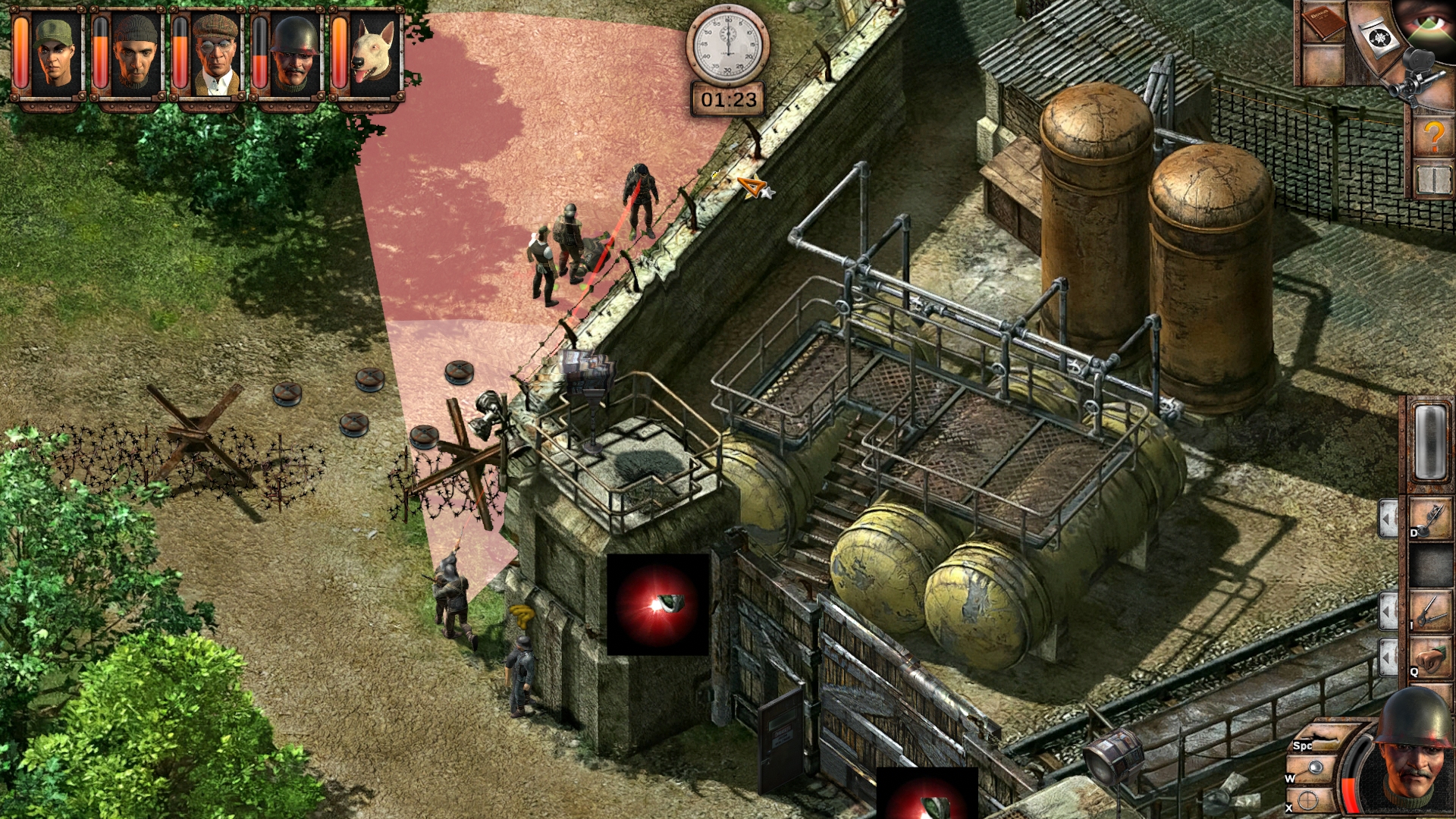 They also deserve to be worked on by capable teams with generous deadlines. The swarm of brightly coloured bugs that scuttled from C2HDR's crannies on release day, suggests that Yippee! Entertainment (the contracted refurbisher) wasn't just beaten by the clock, it was bound, gagged, and concealed in the shrubbery by it. Cursor accuracy problems, absent sounds, occasional framerate slumps and mission-curtailing freezes, inventory issues, missing interior catwalks and floors, opaque wire gates and lamp auras… the idea that the devs and publishers were unaware of this mound of malfunctions when they pressed the big red RELEASE-AND-BE-DAMNED button on the 24th defies belief. 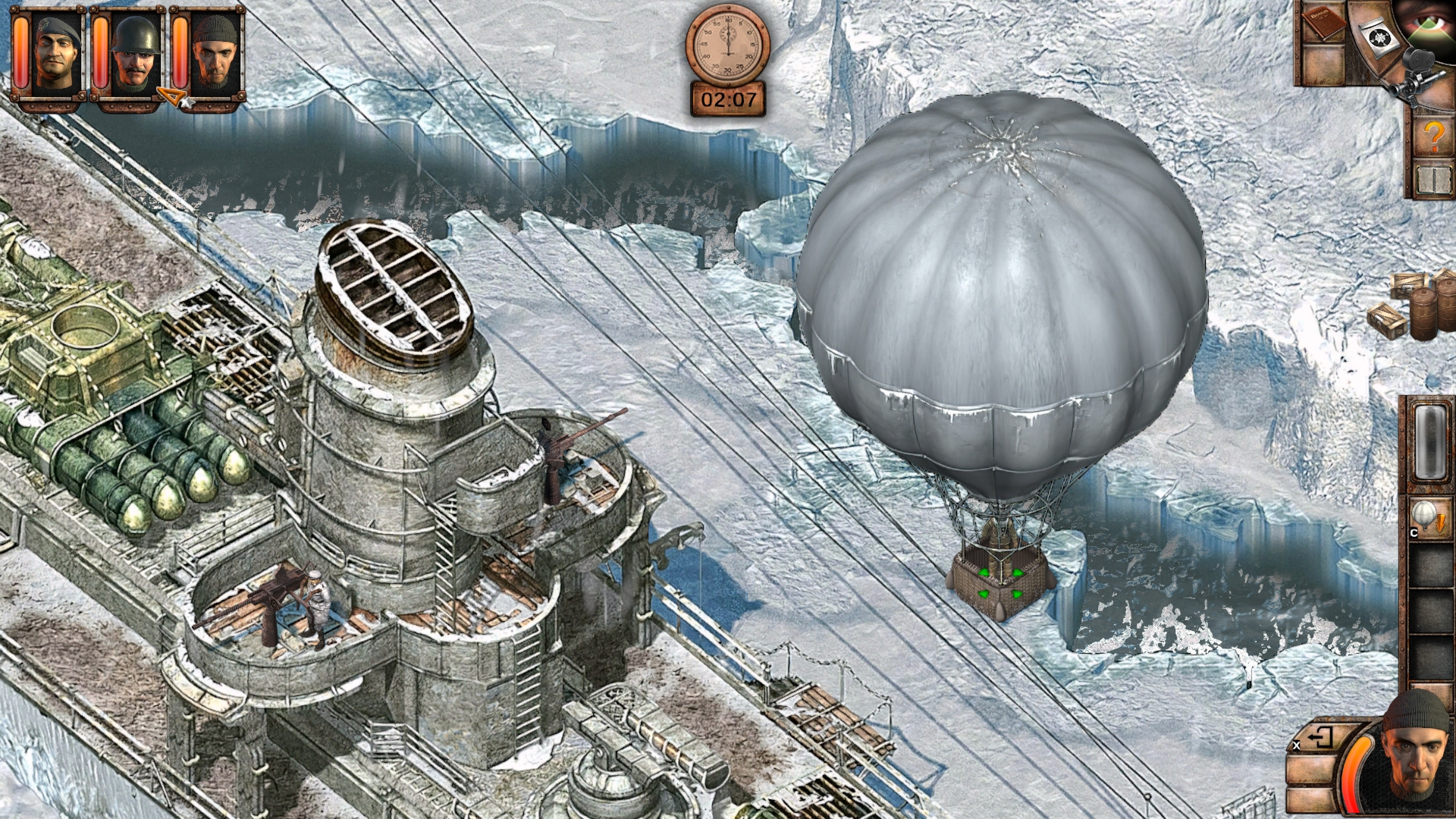 For “a true homage to one of gaming’s most celebrated masterpieces” the Remaster also shows a surprising lack of interest in the ancillary features of that masterpiece. Multiplayer has not survived the refurbishment, neither have multiple view panes (in the original you could monitor several areas of a map simultaneously by creating new view windows) or camera movement via the mini-map (on the way, apparently). Old-timers like me who return to C2 periodically, playing favourite levels with the help of trusty cheats, haven't been catered for. Those convenient five-character shortcuts to Savo Island, Castle Colditz, White Death and the like? Blocked up with metaphorical rubble. 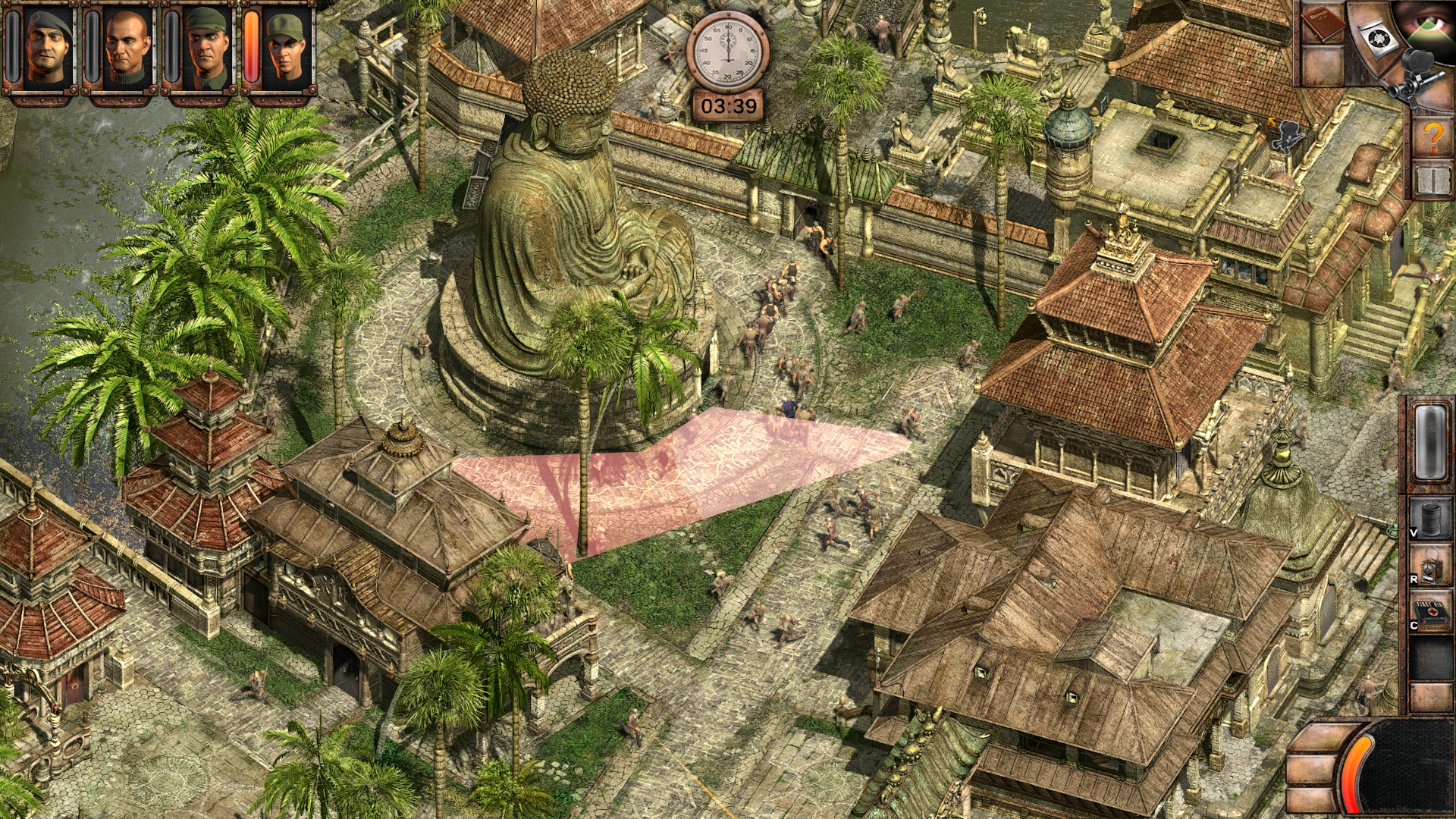 Two days ago, players got a tantalising glimpse of what C2HDR could and should have been at launch. The 1.05 patch introduced camera zooming, a truly transformative improvement that almost single-handedly justifies the re-release.* Although Pyro's fabulous pre-rendered backgrounds - arguably the one element of C2 that Shadow Tactics didn't outshine - haven't benefited in the slightest from the HD treatment, it's splendid that we can now decide, with a roll of a mouse wheel, how much ravishing real-estate we have on our screen at any one time. Before 1.05 the most tangible and – to me – most welcome things the newcomer brought to the table were crisper interiors, commandos and sentries. There's no denying, Tiny and co. look awfully fuzzy in legacy versions. 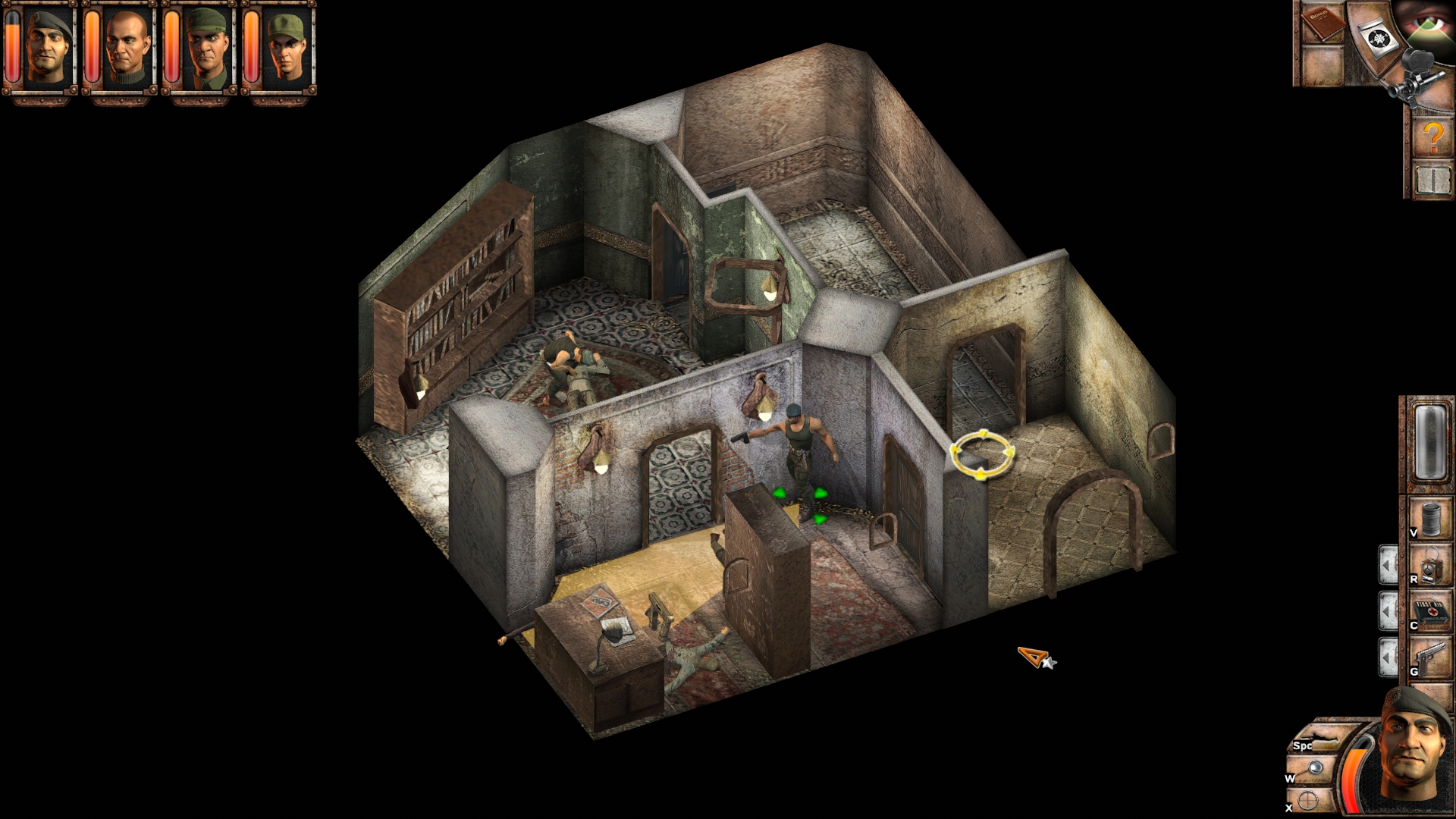 The sections of this review concerned with censorship and bugs really should have been devoted to extra content and engine improvements. If the new IP owners had provided an extra bonus map or two, figured out a way to add Desperados-style synchronised actions, randomised sentry positions or mission variants to the game, then C2HDR might seem more attractive to those of us who've already purchased Pyro's magnum opus twice before. As it stands, bug-speckled and prudishly pruned of period sigils, it's eminently ignorable. 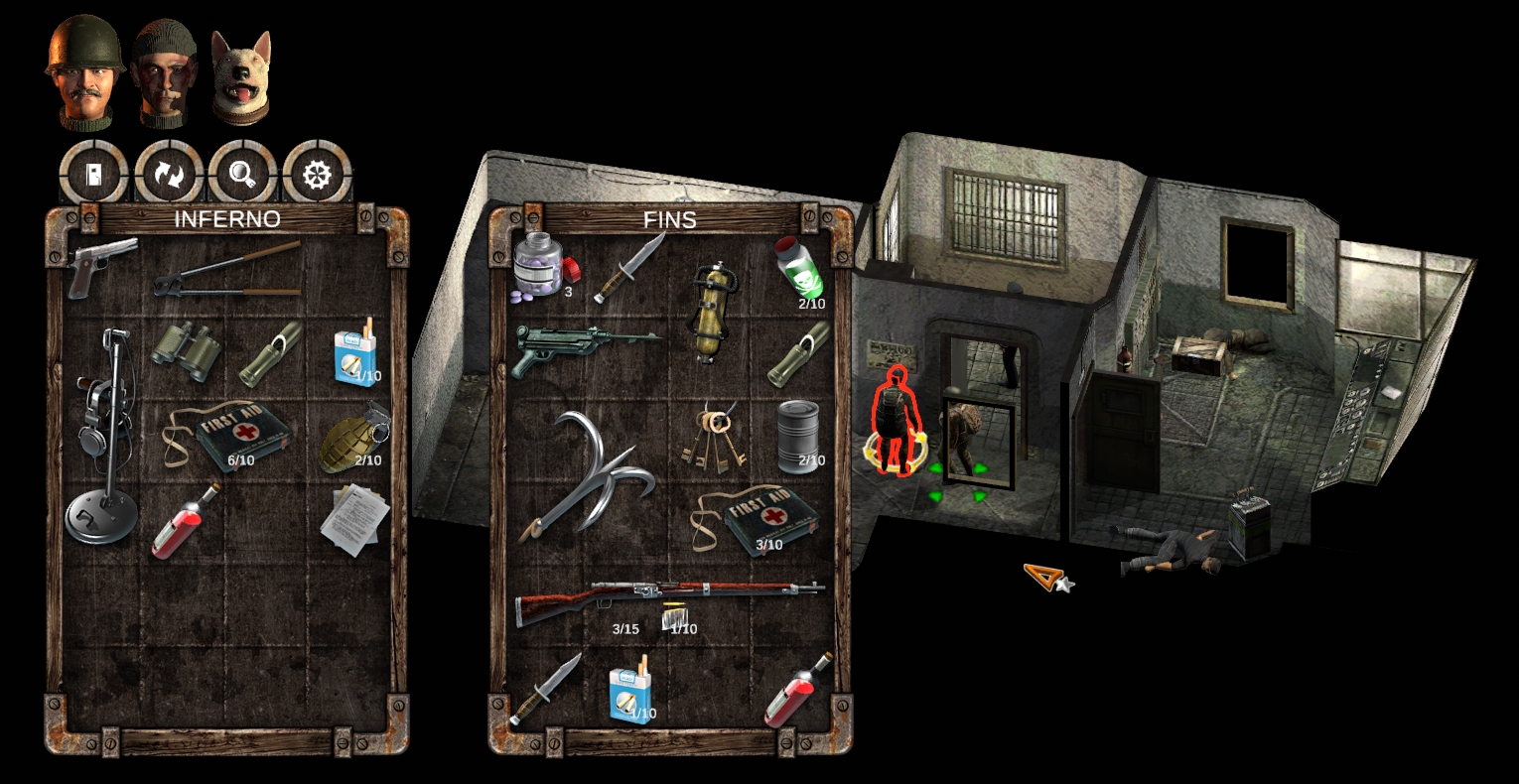 Of course, in addition to being rather disappointing, it's also one of the most colourful and engrossing WW2 games ever made because, at heart, it's still Commandos 2: Men of Courage. Shadow Tactics: Blades of the Shogun might have made its inspiration look a little shabby in the UI, AI, character design and story departments but in terms of ambience, equipment variety, and endearing eccentricity, the son could still learn a thing or two from the father. 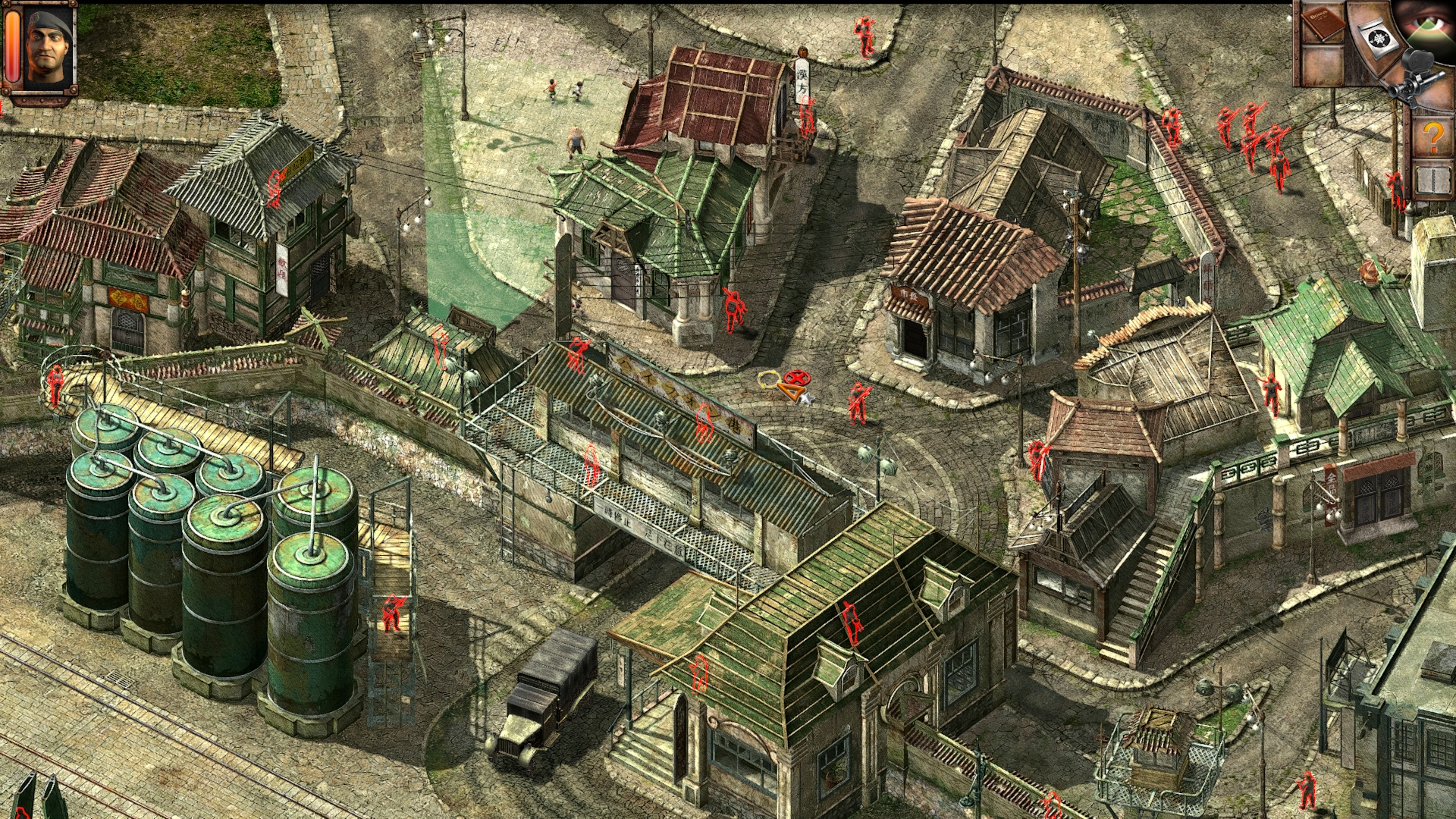 While the unimaginative can, if they wish to, painstakingly depopulate most of the game's ten main dioramas using the dull/efficient combination of cigarette packet and knife, there are inducements to use more novel tactics everywhere. Creative commando choreographers cull with the aid of trip wires, disguises, drugged wine, radio decoys, fists, firearms, fire*, hastily dug holes, freshly applied lipstick... They employ performing mice, tame elephants, even hungry crocodiles at times.

* Squeamish Kalypso have modified molotovs so that they kill instantly. 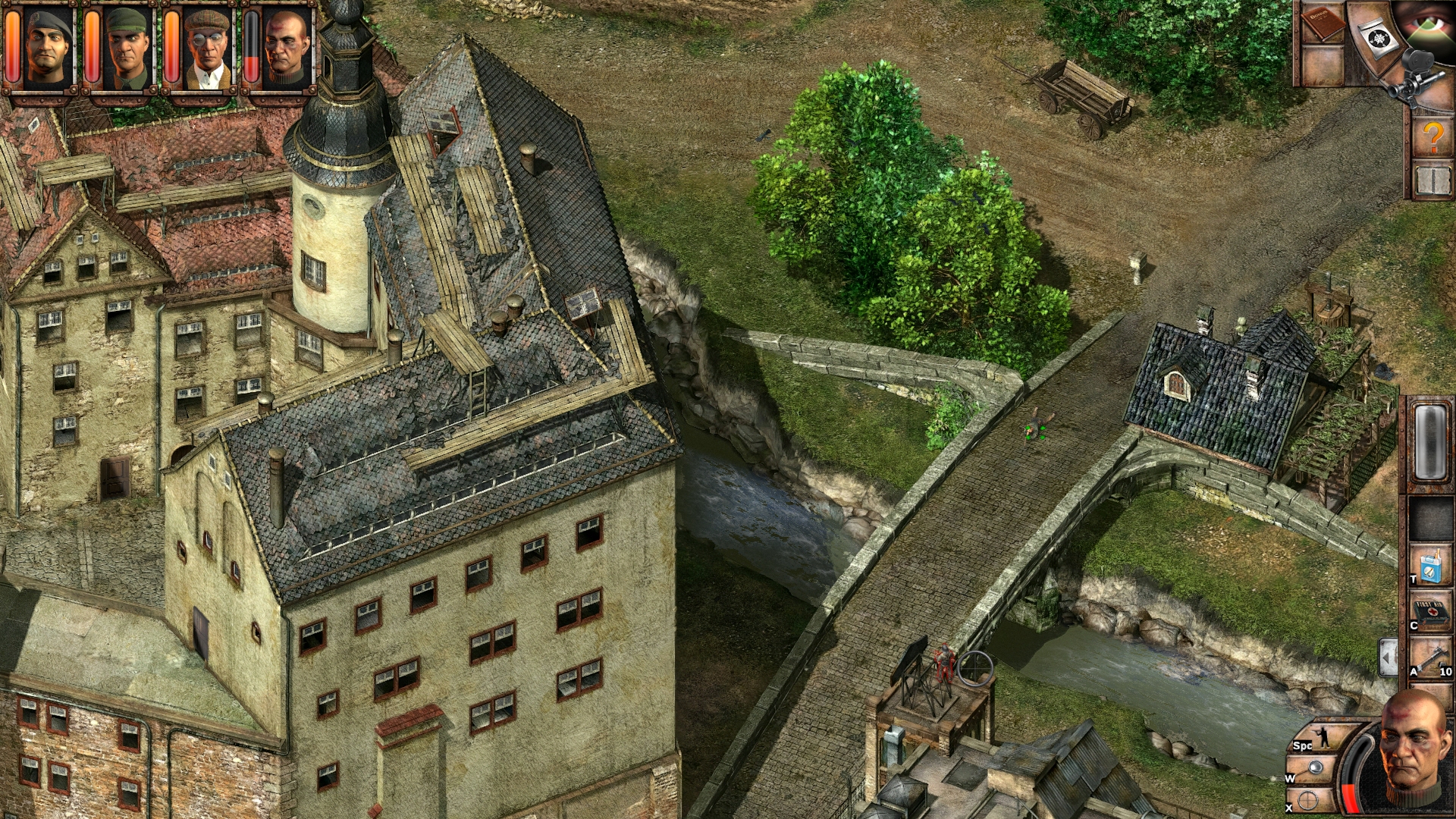 The freedom to tackle the magnificent levels almost any way you choose, remains one of C2's most beguiling attractions. 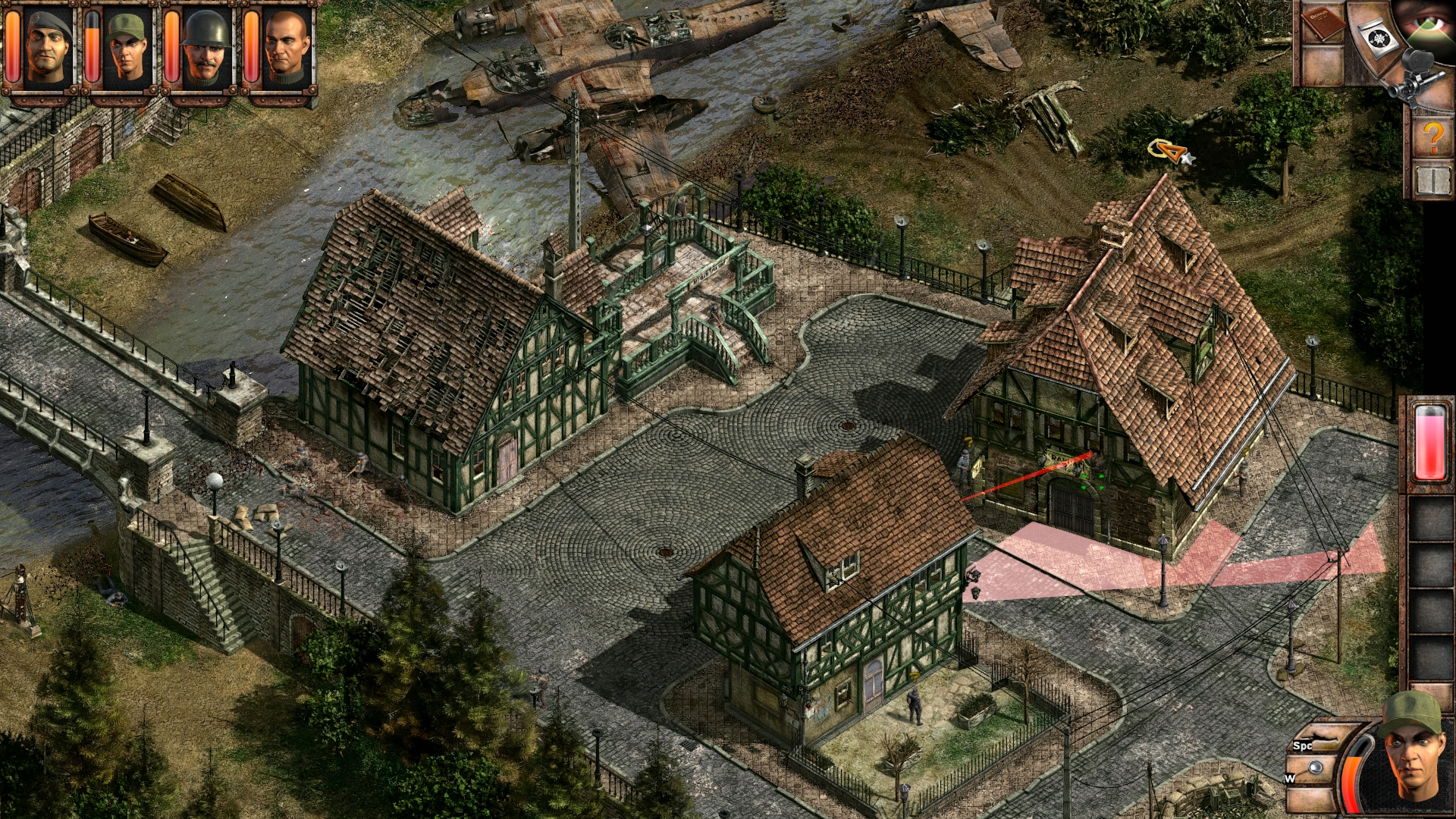 Kalypso and Yippee seem determined to banish memories of the ropey release build (As I type this, my install is being modified by a fresh 1GB patch - 1.08) as quickly as they can. If they stay the course and keep delivering fixes at the current rate, by March, Commandos 2 HD Remaster could be entirely error free. I'm reasonably confident the repairs will be completed satisfactorily. Whether Pyro's masterpiece will ever get back the minuscule black crosses and red circles, it wore, without controversy, for nigh-on twenty years, remains to be seen.