Villain monologues: forever a trope to make the eyes roll. I tend to skip through them as quickly as I can, waiting my inevitable escape. I don’t enjoy self-aware villain monologues either; they’re even worse because the villains know that they’re clichéd yet they do it anyway. I'd prefer it if they just immediately murdered me instead.

Danganronpa, a visual novel/detective adventure in which a sadistic cyber-bear drives teenagers to murder each other, takes this trope and spins it on its head. Ursine villain Monokuma’s monologue doesn’t occur during the climactic scene of the game; instead, it occurs throughout, in segments known as “Monokuma Theater”. Ever wanted to know what chatting with a psychopath over drinks would be like? Monokuma Theater is for you.

Danganronpa can be a heavy visual novel. One day you’re hanging out one-on-one and bonding with your friends, and the next day you find one of them dead, covered in pink blood. Classmates who had previously told you that they treasured your friendship are now screaming at you and demanding to know why you did it. In the midst of all this chaos and confusion, the pseudo-philosophical ramblings of a homicidal robot teddy bear can seem almost serene.

I don’t mean to criticise fans who believe this: the very joy of Monokuma Theater lies in its interpretive ambiguity. Monokuma’s monologues are the tea leaves the Danganronpa writers sprinkle across the narrative, and it’s up to us to determine what those tea leaves say.

Let me give you an example of one of Monokuma’s rants:

"What do you think guides the world? Speed, of course! That’s why Formula One drivers are so popular! Any idiot can accomplish something if they take it slow. Even a human piece of excrement could create a masterpiece if they spent their entire life on it!" 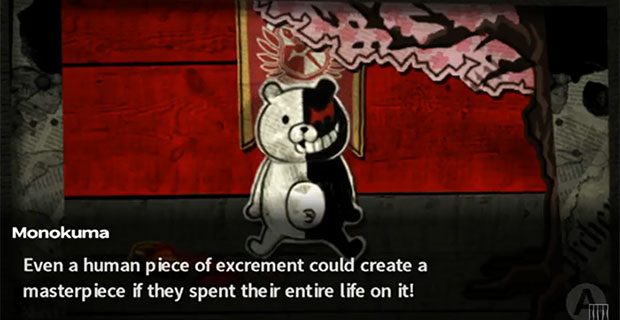 When I first heard this monologue, I assumed that Monokuma was telling me that something extreme was about to occur, presumably as soon as the next in-game day began. Now that I have played the game through, my theory is that Monokuma might be explaining why he provides the characters with motives to kill one another.

Sure, one of the characters might devise the perfect murder and alibi after ten years of planning, but isn’t it so much more impressive to figure out how to do it mere days after Monokuma's murder game has begun?

The Monokuma Theater monologues are like Rorschach blot tests for Danganronpa players. Do you see a butterfly or a bat? Do you see murder or redemption? Tell me what you see.