The best time to play a Destiny raid is as soon as it launches. Before the puzzles are solved, the bosses cheesed, the builds optimised, and the surprises spoiled, get in and discover it for yourself. Raids are extra brutal at launch because the first 24 hours are under a special 'Contest Mode' making enemies so much tougher while players race for the world's first completion. So when Destiny 2: Beyond Light opened the Deep Stone Crypt last Saturday, I dove straight in with my fireteam for puzzling and a pummelling. It was: great.

The Deep Stone Crypt is the mysterious birthplace of Destiny's robot people, the Exos, and - surprise! - it's monstrous. Bungie have dropped cryptic hints for years so it's good to finally see what friendly neighbourhood megalomaniac Clovis Bray was sciencing up. It's a real looker too, balancing clean sci-fi labs with a touch of horror and a big kick of spectacle. I'll wander into spoilers a bit later in the post so, y'know, give up if you're waiting to see for yourself.

The launch of a new raid is a big celebration in Destiny, with Bungie sending actual title belts to the one team who win the 'raid race' and special in-game emblems for everyone who finishes in the first 24 hours. Because figuring out how a raid's battles and puzzle work evidently isn't challenging enough, for the first day Bungie also slap on the Contest Mode which caps player levels way below enemies. So you're trying to figure out how the encounters work (which this time involve juggling special buffs to see hidden things, control machinery, or interrupt bad things) while also taking a sound kicking. We died a lot. Even once we figured out solutions, being forcefully underlevelled gave little leeway for mistakes.

It's great. I adore hard Destiny. The game has a lot of scope for careful builds of skills, weapons, armour, and mods, but it's rarely necessary so I relish the opportunities to get serious. I've talked before about the tactical challenge of Grandmaster Nightfalls and my solo flawless Prophecy attempts, and day-one raids scale that up to six players. It's demanding, but makes success so much sweeter. I was pure stoked when we finally beat Artaks-1, the self-replicating boss who most groups stalled at for hours. But Jesus, it took a while.

After playing across maybe 13 of those opening 24 hours, we didn't finish the raid - but we did reach the final boss. That was satisfying enough. The winning team took 5 hours and 29 minutes, and fair play to 'em. No raid race emblem for me, not this time, though it was closer than I've got before. I'm glad Bungie waited until later in the season to launch a raid this time, and that it started on a Saturday, not a weekday.

I finally returned to the Deep Stone Crypt last night with many of the same people, and we finished the whole raid in two-and-a-bit hours. I'm sure we'll soon be under one hour. It's easy now, really. We know the puzzles, we have the builds, and we have the levels. It was still great fun but man, I almost missed Challenge Mode. I don't want Bungie to make the whole game harder, but do like them adding tough options. As much as I enjoy regular happy-go-lucky Destiny, having humility kicked into me every now and then does a world of good.

Spoiler time? Spoiler time. Destiny 2 is always great at spectacle and scale, and MAN the Deep Stone Crypt has some good spots. One boss battle is split between the Crypt on Europa and an orbiting space station, having players ride up and down in wee pods carrying fragments of the boss to flush out airlocks. That's good.

Also great: platforming along the underside of that space station, with sound muted by the vacuum and a lovely lullaby piped in.

Continuing greatness: a chaotic encounter about juggling nuclear cores while that space station plummets down through the atmosphere.

Though the final boss did once again make me feel like I was attending someone else's school reunion. I did not recognising Taniks because he's from the first game, which wasn't on PC. But he's back, and this time he's a Doom Eternal baddie? Anyway, some of the fireteam seemed glad to meet this absolute ledge again. 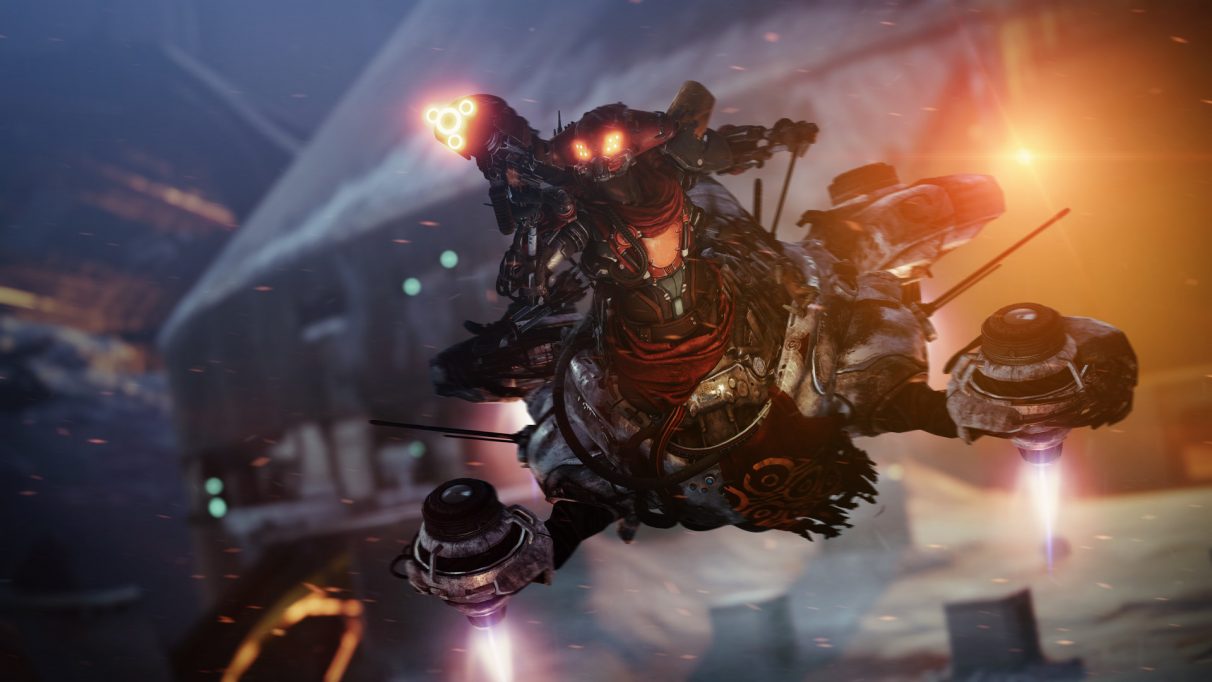 The best time to play a Destiny raid may be as soon as it launches, but the second-best time is any other time. They're great fun. I do recommend having a go, even if you're not super serious about Destiny. They might sound intimidating but they're really not too tough, and the teamwork is satisfying and the spectacle spectacular. We have an RPS clan with plenty of people active on the RPS community Discord, with kind-hearted folks often volunteering to walk newcomers through the raids. I swear it doesn't take 13 hours.