As we grapple to understand Destiny 2's looming spacepyramid threat, this week the enigmatic forces extended an olive branch in the form of a gun which... turns its victims into orbs you can pick up and dunk on their mates to murder them too? And this is to help us understand them? Great. We'll be having coffee mornings any day now, then. The new quest for Ruinous Effigy arrived in Tuesday's update and it's well worth getting. It's great fun to play with, and such a perfectly odd gift from an alien presence.

Ruinous Effigy is a new Exotic trace rifle which, like other Exotic trace rifles, fires a constant beam of energy. Normal enough so far. Then you kill someone, and the gun turns them into an orb. Hundreds of kilograms of muscle, metal, chitin, and gristle somehow condensed into a small glowing orb. Then you can pick up the orb and wield it as another weapon.

Left-click is a powered-up punch that one-shots trash mobs. Hold C and it'll pop a purple dome which reduces damage and negates boss stomps while hurting enemies and healing you. The orb has limited ammo which counts down every second as well, but if you run out when holding the dome it'll hold steady but eat your health instead. And right-click consumes the orb in an almighty dunk with a good amount of AoE damage (best performed from the air for dramatic effect). With the weapon's Catalyst, wounding an enemy with the orb boosts beam damage too. It has a lot of clever little tricks. But why would a gun do any of this?

Ruinous Effigy is a gift from the mysterious forces of the Darkness pyramids, see, born of a branch from the spacetree they're so interested in on Io. Eris thinks they're trying to communicate and reaching out with what we understand best: weapons. Zavala thinks the gun might be a trap. Banshee-44 says it is organic but certainly not wood. 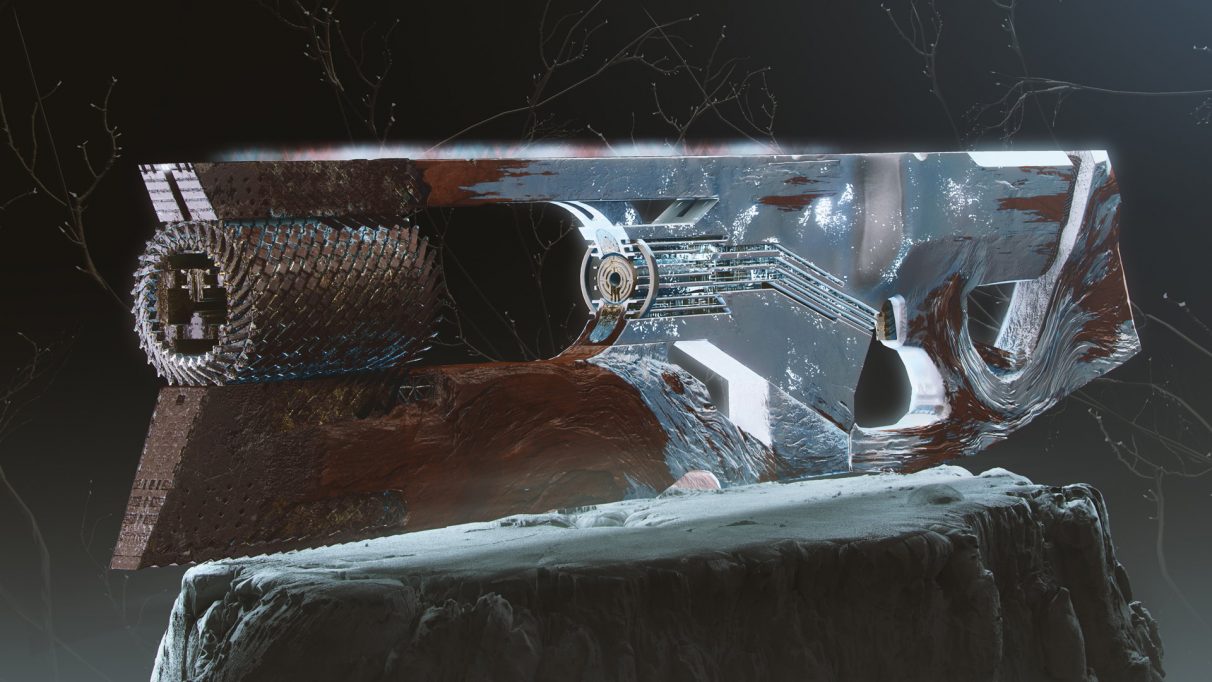 "Effigy" is the right word. It looks like it's made from scrap wood glued together with some mechanical doodads and sloppily painted with white gloss, as if a child tried to make a toy gun from junk found in the shed. Its warbling beam sounds like a Doctor Who ray gun too. Appears to be trash in the shape of a gun; actually performs gunmagic beyond our understanding. It's a delightfully strange artefact of first contact: "Hey, we've noticed you primates enjoy guns and hot dunks, take this, go transmute some lifeform into an orb then use that impossible object to punch their mate in the face." I'm not saying they've read us wrong, but I wouldn't accept a neighbourly muffin basket from them.

I am really digging the apocalyptic vibe in Season Of Arrivals as the pyramids start spreading out and giving us weird toys. They're such an ominous presence, crackling with energy as they hang over the planets and moons we know will be removed come September's expansion. I'm so glad this orbplank is the first bit of pyramid tech we really get to play with.

Season pass holders can now get Ruinous Effigy from a new Exotic questline started by the Drifter's Prismatic Recaster. You'll be sent through Eris Morn's weekly Interference quest, then to collect some crystals and kill the Savathûn's Marionette enemies around the solar system, the finally grind out a few rounds of Gambit or Reckoning, get Void kills, and score some precision multi-kills. It took me a few hours, and the busywork was fine because: 1) I like fighting the Marionettes and their beefy mates 2) The crystals are highlighted from 200 metres away if you whip your Ghost out; 3) Look I enjoy Gambit Prime, okay.