Tekken 7 is a strong fighting game, strong enough to break your ankles. My exploits have included having a robot’s head thrown at me and haymakering a Swedish ninja. It’s been emotional. But winter has descended on the fighting ring, and there is too much resentment and anger in the air of Tekken. So I dressed up as Santa Claus and visited all the good boys and girls of online multiplayer, to deliver the joy of Christmas.*

*The chance to knock Santa unconscious.

The goal here was to give my opponents a single free win – a present for those in the lower ranks. And to do it in such a fashion that they’d know they’d been visited by old St Nick. For this very important and serious mission, I needed a good costume. I toyed with creating a Santa version of leggy chef and Bruce Lee knock-off, Marshall Law. 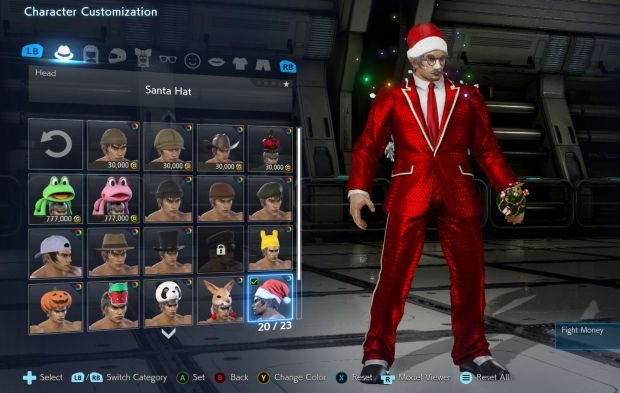 But this felt too flashy. In the end I went with a jollified Bob. 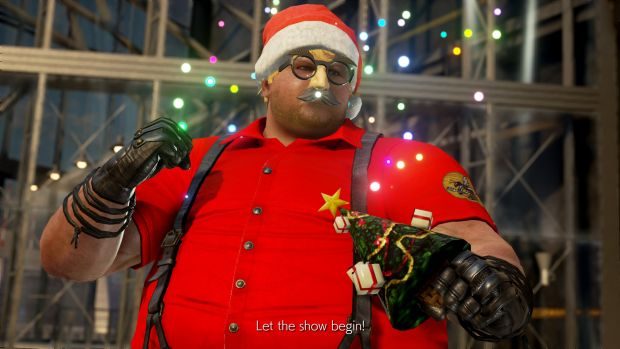 This character is normally seen wearing a Hawaiian shirt and rocking a blonde bed-head. But thankfully he has a costume option which puts him in suspenders and a red shirt. After that I simply added the final touches: a Santa hat, red trousers and black boots. Sadly, there was no white beard but I do have two usable items. A snowflake that can be thrown across the arena. And a tiny model Christmas tree that can be planted in the ground, like so. 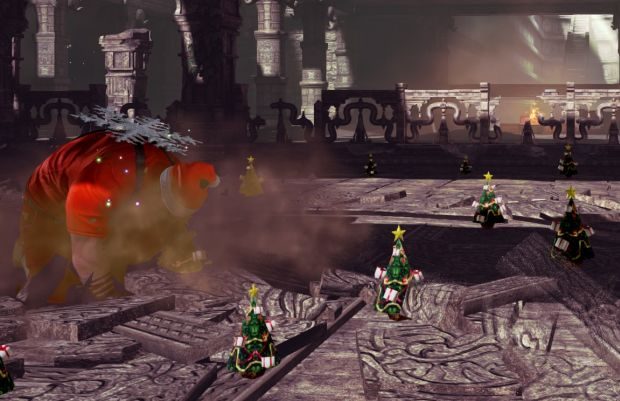 Now to visit the boys and girls of the Iron Fist Tournament. What better way to find out if someone is naughty or nice than by facing them in hand-to-hand combat and seeing if they will welcome Chris Cringle with open arms, or a swift knee to the side of the head.

My first match-up is with Asuka, a girl who arrives to every fight by bicycle. According to the Tekken wiki , her likes include “confrontation” and “vigilantism”. She is described as “good” and “alive”.

She is also notable for her uppercut. 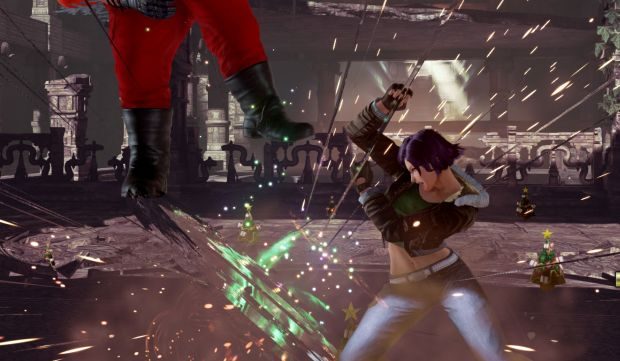 Next, I visited another rowdy young woman, Ling Xiaoyu. 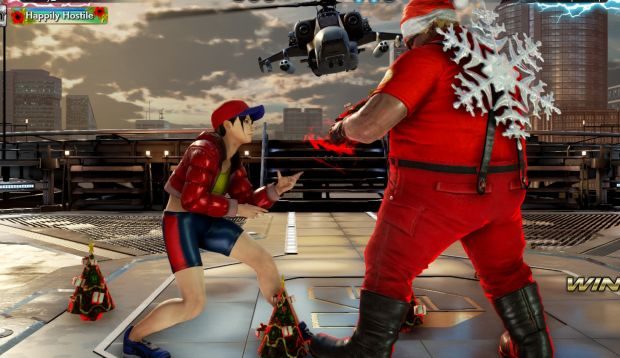 Her likes include "steamed buns" and “Pressing her cheeks to fridges (during childhood)”. She was a very good-natured girl and quickly realised that all I was doing during our fight was planting one tiny Christmas tree after another, without fighting back. During the final round, she stopped punching and allowed the time to run out. Then she stood over my battered body in the closing cinematic and regretted her actions. 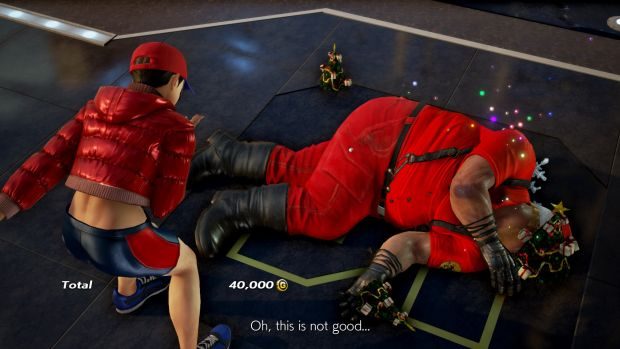 I also visited this Gigas, who is a large “biotechnological weapon” whose fighting style is described as “Destructive impulse” and hobbies are listed as “N/A”. 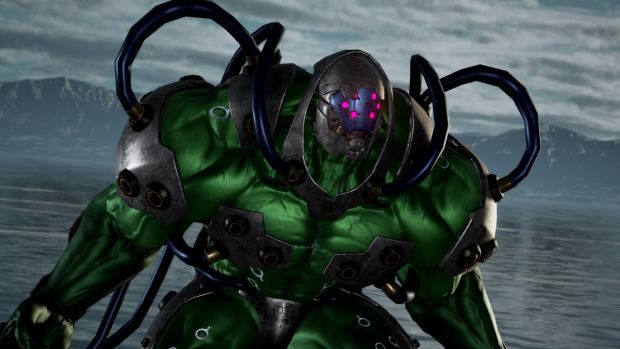 I do not know why people malign this sweet young man. We spent the entire time dancing together across an infinite azure (we sidestepped a lot on a map with no walls). 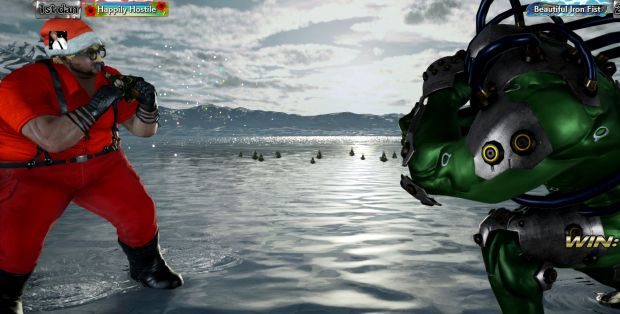 This gentleman, playing as CEO and literal reincarnation of the Christian devil, Kazuya Mishima, was a bit confused by all the festive trees I was planting on top of his corporate headquarters in the rain. 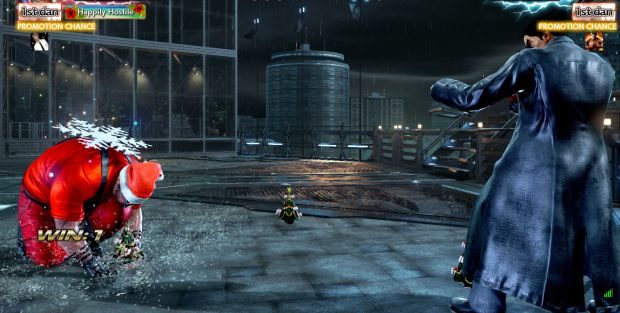 But even the modern-day Japanese embodiment of Satan can find it in his heart to stop fighting and start jumping up and down in happy unison with a gift-giving visitor from the North Pole. 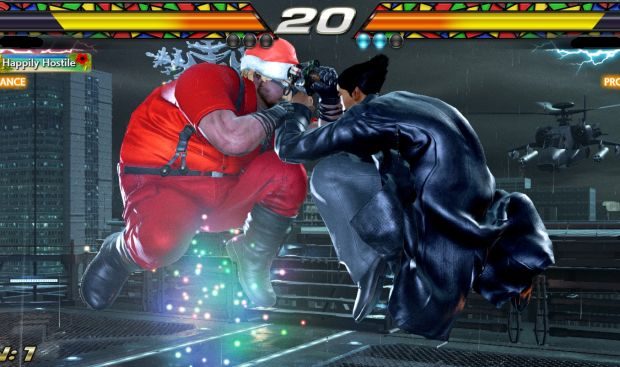 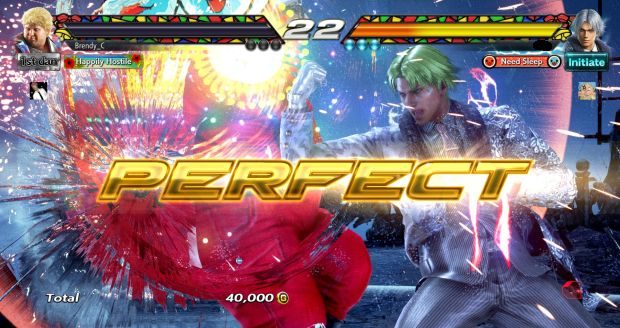 … knocked me unconscious without even a warm cookie or glass of milk.

This Lee came at me with a knife! 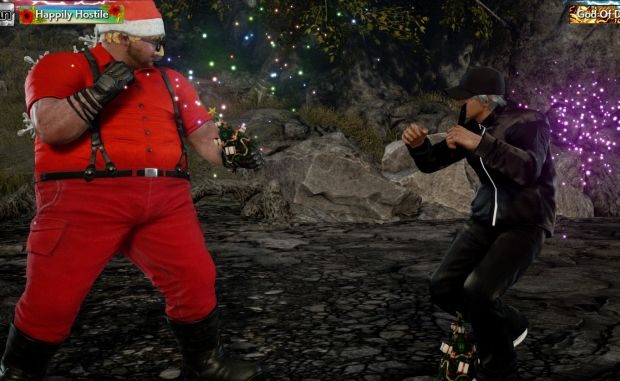 Santa doesn’t give presents to kids with knives! 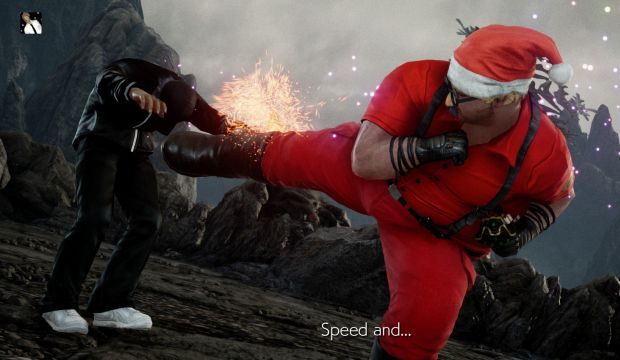 Rating: Sent to a borstal.

This Jaguar-masked wrestler, known as King, was wearing a cowboy hat when I decided to drop by the wistful winter wonderland of Siberia. 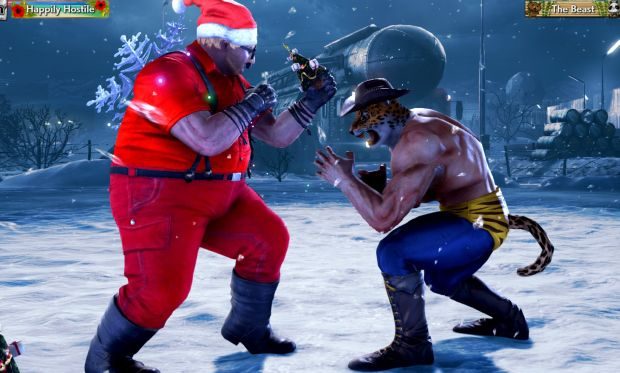 He watched me plant many trees, but in the end he just couldn’t help enthusiastically breaking most of my limbs and submitting me to generous chokeholds. He even gave me a hand getting on with my job of circling the globe in a single night. By picking me up by the legs and launching me at the sky. 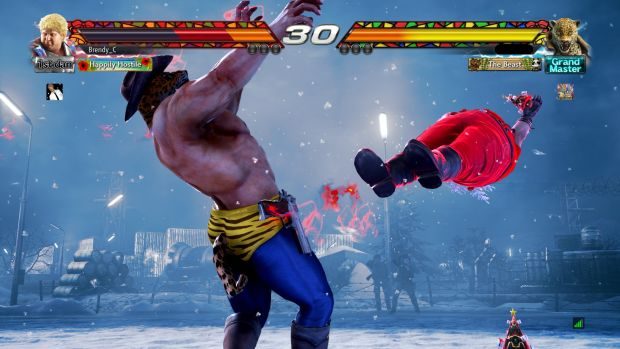 I visited many more children. Some were naughty, some were nice, and many simply defied classification, caught betwixt their innocent desire to receive gifts and a deeply embedded instinct to crush the skulls of all who come before them. 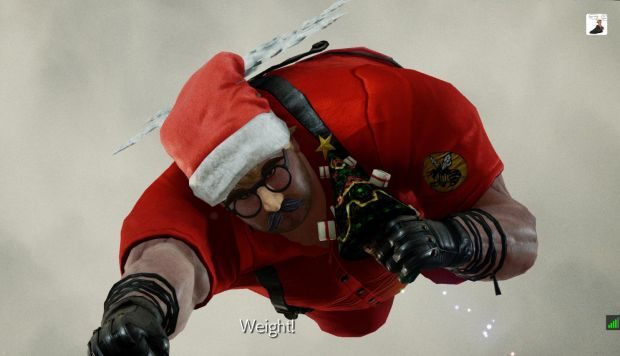 Overall, however, it was a positive experience, with most players happy to indulge a wholesome visit from Santa. With that, I say goodbye and Merry Christmas to all the Children of the Iron Fist. Ho ho ho.

Except you, Lee. Enjoy your time in juvie.