There are some good, silly names in the latest expansion for monster-battling card game Duelyst. A goth called Maehv Skinsolder. A mutliarmed sorceress called Shidai Stormblossom. One guy is called "Brome", which is the most US high school footballer name imaginable. They're all new generals, part of the 100-card roster of Immortal Vanguard, which came out a couple of days ago. I haven't summoned my precious winged rat babies in a while, so I can't say what this adds to the shifting tactics of the game. But I can say that "Ragnora the Relentless" sounds like a good name for a superhero dinner lady.

There are six new generals in total, one for each of the weirdo factions. Ragnora belongs to the green-skinned gym scum known as the Magmar, for example, and her special spell is to summon slimey eggs nearby. The expansion also adds a "build" mechanic. This means there are new minions that start life as a structure, with a building timer. When the timer reaches zero, it turns into its final form. That's explained in more detail here.

They're adding more mechs too. Previously, there was a collection of colourful robot minions, and once you summoned all five of them, they unleashed "Mechazor" a spell-proof pain in the backside. He is like Voltron, except that he has never done anything positive for humanity. But it looks like he's getting nerfed. You can inspect those changes here. 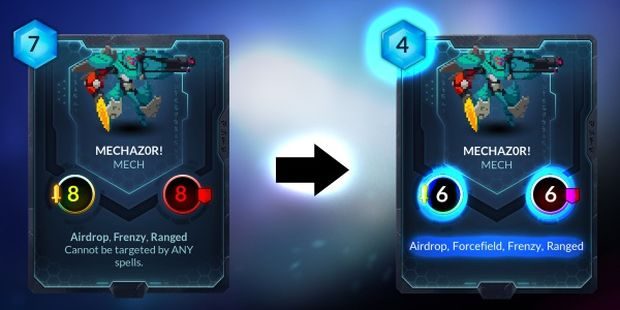 There are also some pricing changes when buying diamonds (the currency that lets you craft specific cards), a large number of tweaks to the core set, and some other quality of life bits and bobs (you can now see what a transforming enemy will change into by hovering over it). It's all in the patch notes.

Duelyst is free-to-play, so it has plenty of the grubby rando drop nonsense that has everyone upset in recent times. But it is also better than Hearthstone, so never mind?