If you click on a link and make a purchase we may receive a small commission. Read our editorial policy.
Premature Evaluation is the weekly column in which Steve Hogarty explores the wilds of early access. This week, he's bothering innocent trees in wood chopping life simulator Lumberjack's Dynasty.Developer: Toplitz Productions, UMEO Studios
Publisher: Toplitz Productions

The weirdest thing about Lumberjack's Dynasty – in a very long list of strange things – are the overheard snippets of conversation as you approach the game’s various NPCs. As you round the crest of a hill you might eavesdrop on a neighbour muttering something about how “everyone is talking about it”. Stroll up the drive of your aunt’s house and she’ll be whispering “yes, it will all be out in the open soon” to your uncle, before they both stop mid-conversation and slowly rotate on the spot like a pair of rotisserie chickens to face you.

Innocuous at first, these throwaway lines of dialogue infuse an otherwise tranquil simulation game about cutting down trees with a kind of chaotic, paranoid energy. The sort that hits you twenty minutes later as you’re chainsawing through a birch and think, what horrible secret are these people hiding? Your auntie looks like the sort who might have mailed talcum powder to her state senator in the 1960s in response to a parking ticket. Your uncle looks like he’s stepped out of a montage of potential suspects in a Netflix documentary about a pair of teenage girls who went missing in the woods - you know, the guy calmly hosing down the back of his pick-up truck at two in the morning. 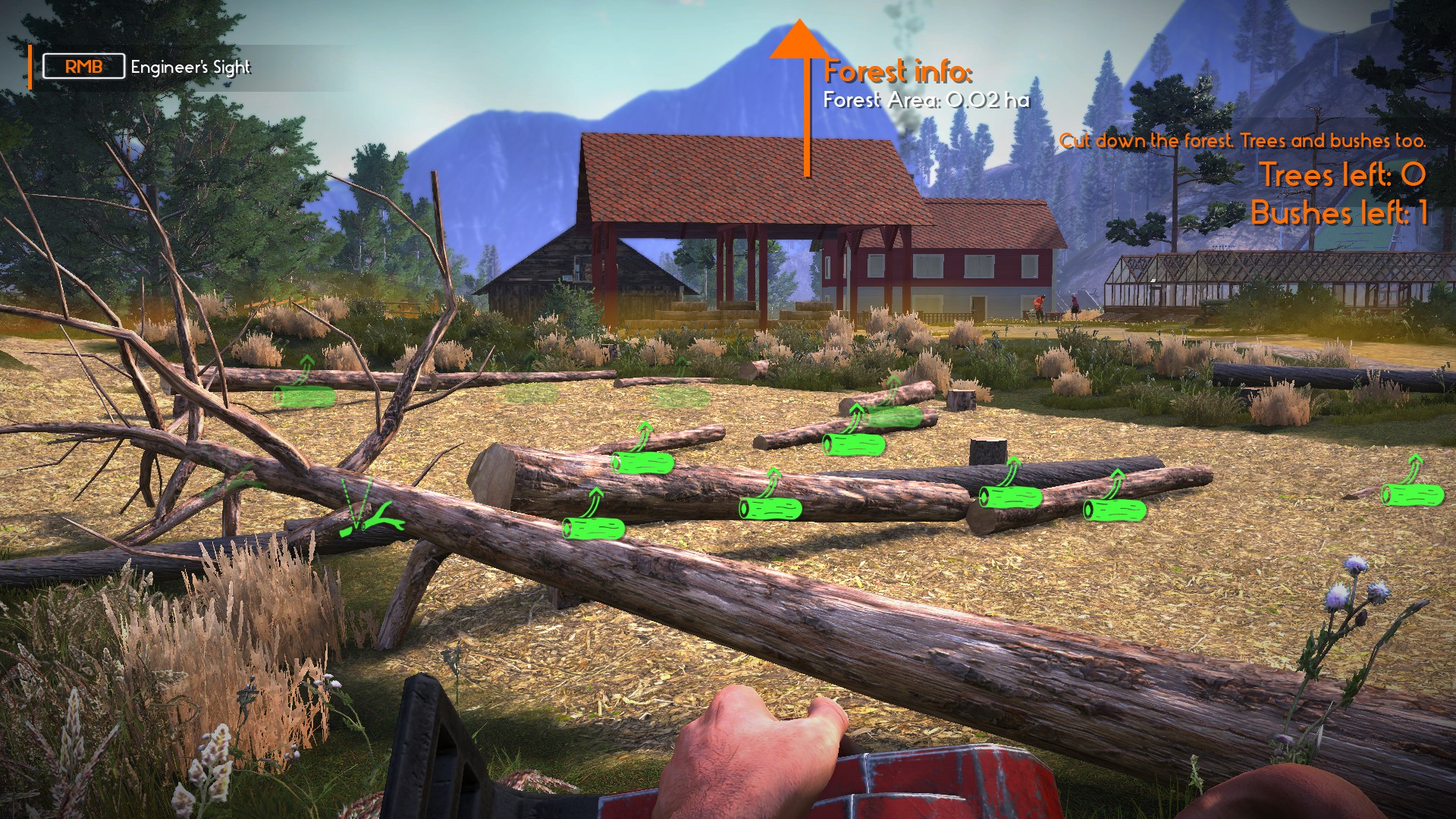 You have the option to refuse to accept ownership of this highly suspicious couple’s highly suspicious logging operation, but all that does is set you loose in a chunk of countryside frozen in time, an indelible objective marker hanging over your aunt and uncle’s house like the sword of Damocles. Try as you might to avoid your fate, it’s inevitable that you take up the mantle of lumberjack and, by extension, become complicit in whatever unspeakable crime the locals are covering up.

Potential hitchhiker bodies at the bottom of the lake notwithstanding, the intentions of the NPCs are more straightforwardly exploitative on a day to day basis. You are young blood, fresh from the big city and in search of meaning and purpose up here in the mountains. You are also the only person within a ten miles radius who owns a nail gun, which you will use to repair the dozens of dilapidated homes, barns and prospective murder shacks of your chore-averse neighbours. 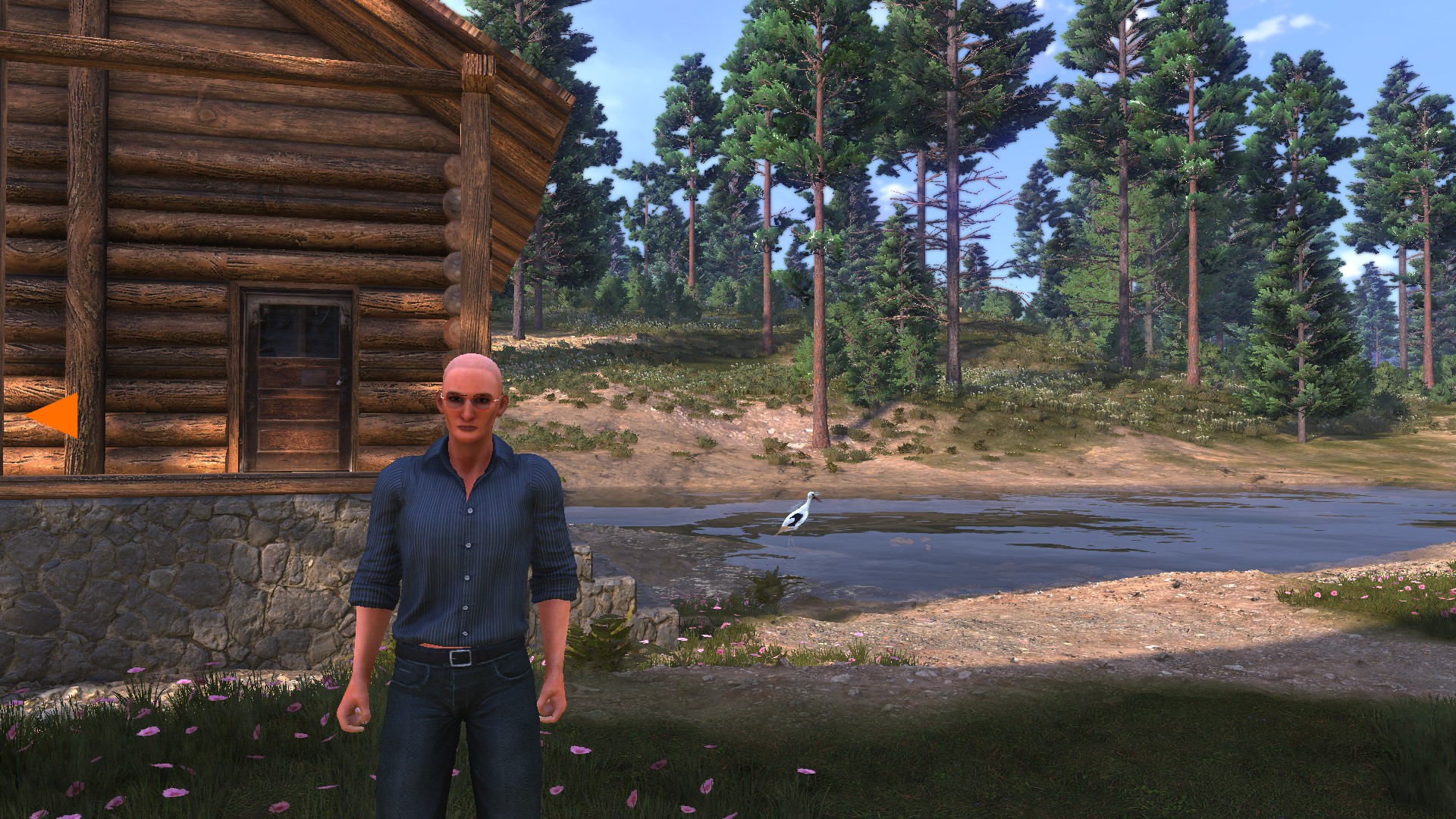 Almost every structure in Lumberjack Dynasty has fallen into disrepair long before your arrival, requiring that you spend tedious real world hours skirting around every last inch of roof and wall clicking on hundreds of hovering repair icons until the job is completed and all the unused dopamine in your body has hardened into a sort of crust. This is how you procure the various tractors and trailers you need to eventually haul your logs around, by repeatedly bartering your nail gun services in an apparently cashless and economically devastated county, one abandoned by any kind of loving god and left to rot in the guilty stench of its own barely concealed moral decay.

Here’s how you cut down trees. You place your chainsaw at one side of the trunk and drag the mouse cursor gradually through it, not too fast and not too slow, until the tree’s structural integrity is compromised. Now at this point you can try to sprint underneath the falling trunk to be crushed to death under its oaken weight, just to feel something, but the tumbling wood bounces off you as though it’s made of styrofoam. No easy escapes here. You then remove the branches by holding down the mouse button over them for a bit, before slicing the thoroughly humiliated tree into a series of easy to manage logs. 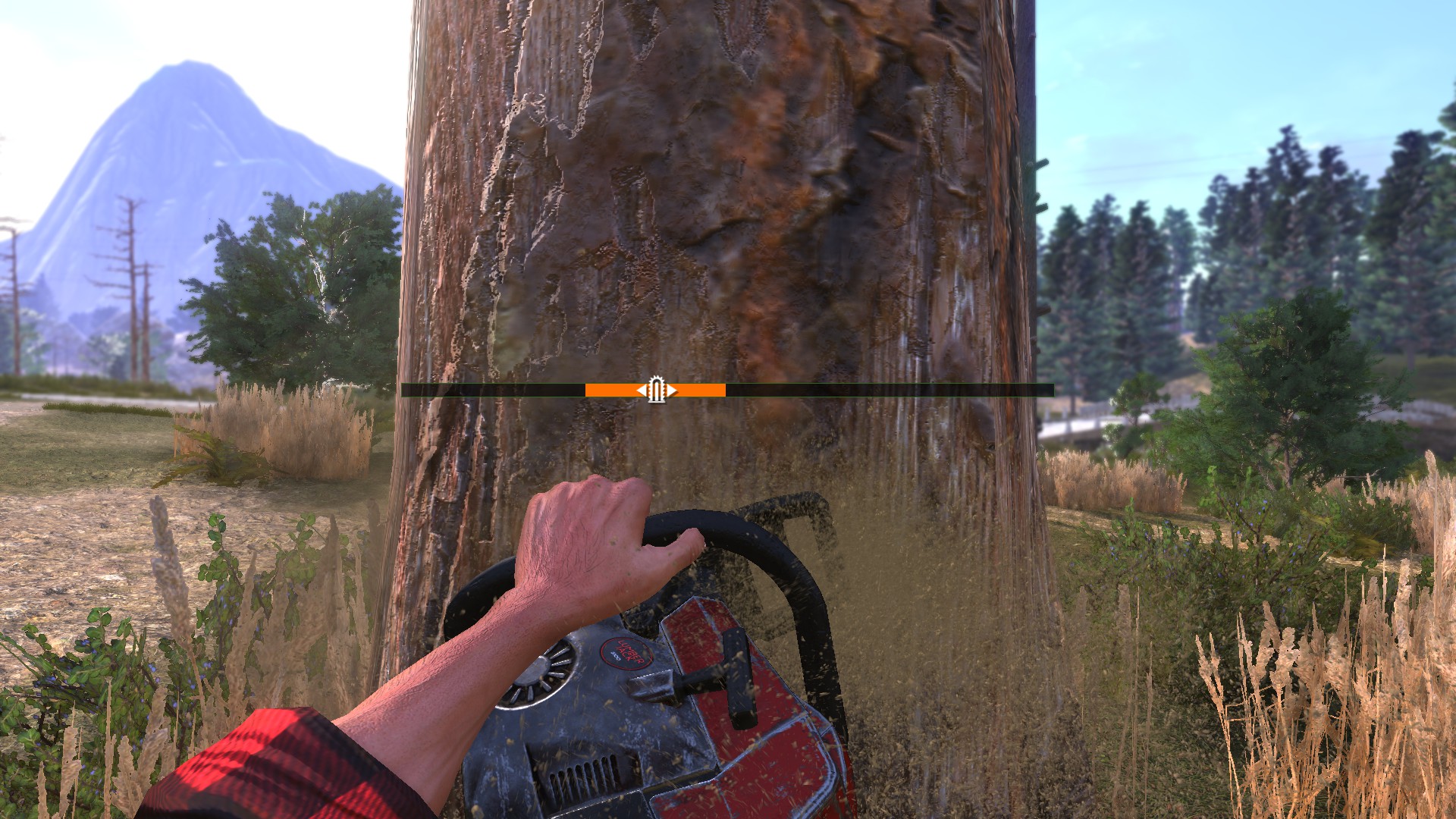 Of all the lumberjack simulators I’ve played, this is the most satisfying depiction of jacking lumber that I’ve found. I’m not being facetious when I say that the buzz of the chainsaw and the strained creak of the falling wood awakens in me some primal urge to wear a check shirt, drink whiskey out of a tin can and crush pine cones between my ass cheeks. That all of this lumberjacking business takes place in a very crudely simulated world, complete with a day-night cycle and a menacing population of badly voiced locals – as if Tim and Eric were put in charge of casting Stardew Valley – contextualises the hard work you’re doing in a way that other sims don't.

Your freshly made logs, which you can chuck in the river where they float downstream to the lumber yard to be dried and cut into planks, aren’t sold off to some invisible, off-screen conglomerate. Rather they’re used to build the various decks and gazebos of your wood-hungry neighbours, or shredded into chipboard to form the cheap interior walls of some shoddily built housing just down the road. Lumberjack's Dynasty aims to be a more holistic simulation of the life of a lumberjack, one that’s not limited by a narrow focus on what each of the buttons on the dashboard of a specific wood-chopping tractor does, but instead takes a wider view encompassing how it must feel to own a chainsaw and couple of trees. 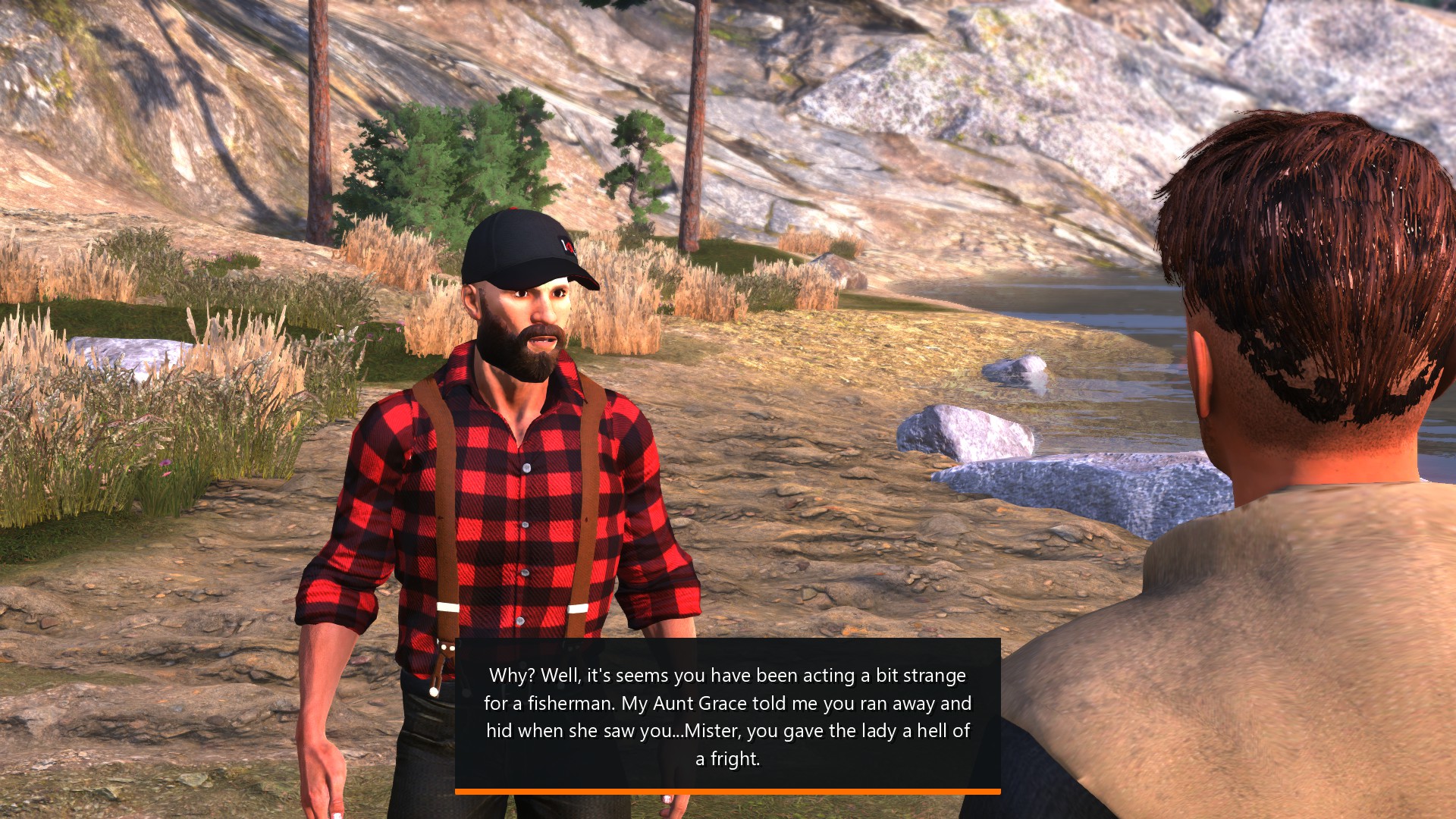 On the road map are various planned features, most of which expand on the life simulation side of things, such as the ability to raise animals, or to find a wife who will stay at home cooking meals for you. But for all its laudable ambition to reset gender roles to the 1960s, this wonky early access lumberjack sim is light on features, riddled with bugs and generally unpleasant to play for very long.

It soon becomes obvious that the endless quests to nailgun strangers’ sheds back together aren’t what's standing between you and the rest of the game, but that they are the game. You are not just the town’s new lumberjack, but the town’s prize chump-for-hire. And that, you'll begin to suspect, is the terrible secret everybody is talking about behind your back.