If you click on a link and make a purchase we may receive a small commission. Read our editorial policy.
Empire Of Sin review
XCOM-style turn based combat in a world of prohibition-era gangsters that also incorporates business management and RPG elements.

Welcome to Chicago in the 1920s; the last known time that fedoras were actually cool. The city is dry, thanks to prohibition, but there’s a rich underworld of gangsters ready to sell you dodgy spirits on the sly. Amid the cigar smoke and whisky-breath, notorious criminals go to war over every street and every establishment.

Speakeasies, casinos, and brothels are the money-makers of the moment. Empire Of Sin lets you take the role of one of 14 criminal masterminds of the time - some real, some fictional - to take control of the city in XCOM-style turn-based combat. I’d do the game an injustice to describe it as gangster XCOM though. Empire Of Sin blends combat with detailed business management, and moonlights as a roleplaying game when your chosen kingpin has a face-to-face sitdown with a rival. You can pay your rival off; intimidate them with some ‘20s tough talk; or pull a gun and wade into their headquarters with a ragtag band of gangsters to take the place by force.

Brilliantly, you control your leader and their entourage from a detailed third-person perspective throughout, gathering your party and venturing forth on the pleasantly rendered streets of Chicago. When you’re not box-selecting your crew and clicking to send them from street to street, you can spin the mousewheel back to see a clean bird’s-eye view of every district in the city. Here you can see where rival gang members and police squads roam, and the game becomes gangster Pac-Man. If diplomacy fails a local gang will shoot you on sight, so you might want to take a detour around the block before you assault that derelict building you want to turn into an illicit brewery.

This is a fascinating hybrid that feels like both Civ and Syndicate. It’s a game that teeters on the edge of excellence, let down by a few key problems. When you mash so many genres together some elements can feel like unnecessary bloat. Oh, I forgot to mention that there’s an entire RPG loot system that lets you acquire extra-special Tommy guns, body armour, health packs, and sticks of dynamite. One moment you’re wading through a spreadsheet listing the status of every building in the block, the next you’re putting your gang leader into overwatch to shotgun a generic goon in a warehouse. It’s a game rich with detail, but the admin and combat systems end up fighting one another. 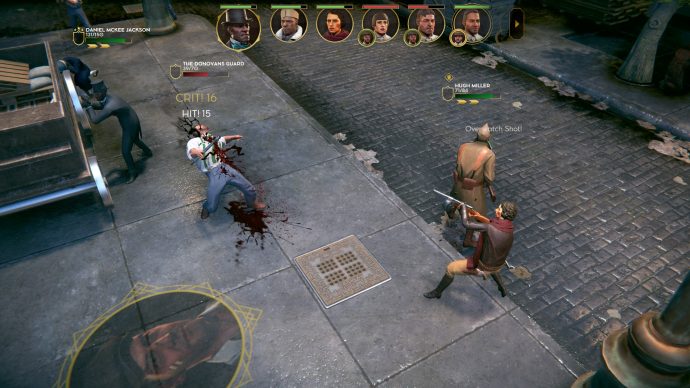 When combat occurs your goons take cover - often in stupid places - and a turn-based shootout ensues. There’s a turn order graphic at the top of the screen that lets you know which goon is going to goon next. When a character’s turn comes you can order them to shoot, punch someone, hunker down, heal up, or watch a section of the battlefield to execute overwatch counter-shots.

It’s a proven formula thanks to Firaxis’ XCOM, but it’s often an odd fit for the setting. It’s easy to imagine that futuristic armour can ablate a laser blast, but when I see a gangster in a sweaty shirt and suspenders shotgun a faceless thug at point blank range, I don’t expect the attack to take half of the target’s health bar with an 80 percent chance of success. Fights are often long, as gangsters hiding behind beer barrels take pot shots to gradually chip down each other’s health pool. There are good points: I’ll be forever thankful to Romero Games for showing me adjusted hit percentages when I move a character. It’s such a simple fix, but incredibly useful information. Unfortunately the game sucks you into so many combat scenarios that progress feels sluggish. 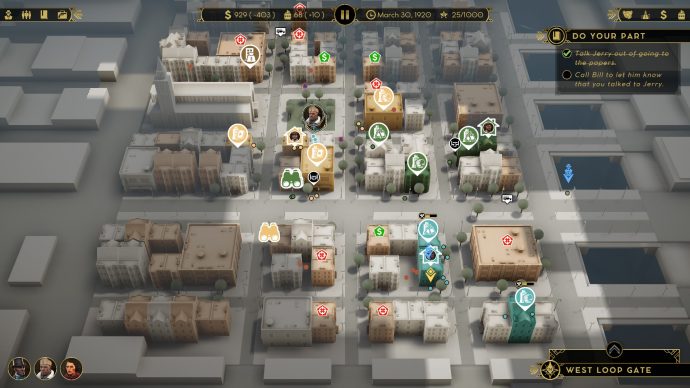 Once you’ve taken a property, the original owner tends to want it back. Cue a relentless stream of defensive missions that barge through your careful crime empire management tasks. I want to guide my posse to a rival’s HQ to have a nice, profitable chat about black market opportunities - but suddenly another gang is assaulting one of my joints, and I have to fritter away enemy health bars for half an hour before I can get back to doing my excellent crime. If you enjoy the RPG side of the game - sitting down in smoky rooms to strike deals - the sudden combat scenarios get in the way. If you love the combat, all of the gritty empire management gets in the way.

For players who enjoy both, this is a detailed sim worthy of your time, but only if you’re initially prepared to put up with some bugs. I enjoyed the review build much more once a 30MB patch landed on Friday - what a difference 30MB can make - but over the weekend I returned to my safehouse and the mouse and keyboard controls simply stopped working. My top-hatted kingpin stood in the parlour, refusing to respond to my right-clicks. I pressed escape to load an earlier save, but that didn’t work either. I had to Alt-F4 out and realised that between the stilted pacing and the technical issues, I’d lost the will to keep going. 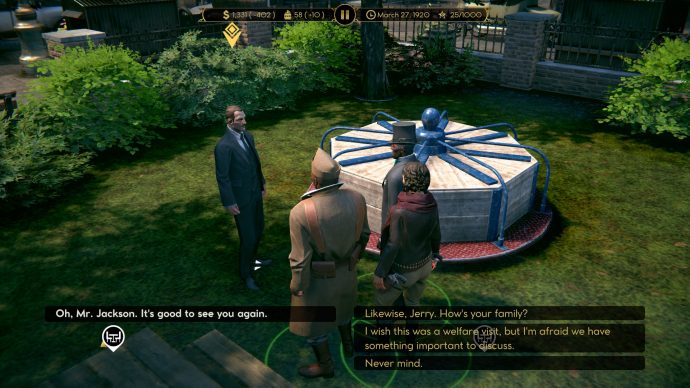 It’s a shame, because it’s a wonderfully ambitious mashup of systems wrapped around a lovely, if extremely cliched, caricature of the golden age of gangster fiction. When negotiations break down and you end up in a shoot-out with enemies that look like they’re dressed for a wedding, Empire Of Sin feels like a farce worthy of a Coen brothers movie.

That feeling is accentuated by a relentlessly cheerful swing soundtrack that plays forever with no regard to what’s actually happening. I love this about the game. The sight of a gang leader brutally shotgunning several enemy goons is only improved by some sick swing high-hat hits on an old fashion kit while horns parp happily. In these moments Empire Of Sin is a world I want to live in, but ultimately not a world I really want to manage.