Tomorrow, Euro Truck Simulator 2 comes (tragically) the closest it is ever likely to come to Eurovision Truck Simulator - with a wink and a smile, giving up on the idea that 'Euro' is any particular barrier to entry. I look forward to the surely forthcoming ETS2: Australia DLC. But for now, we get Beyond The Baltic Sea. Newbie ETS2 nations Lithuania, Latvia, and Estonia are all EU member states, so fair dinkum there, mate - but not so much Russia, some of the more Westerly reaches of which are now also accessible on 18 wheels.

It's SCS's wonderful Truck Simulator series boldly embracing a whole new geopolitical region - and quite likely laying the groundwork for years of ongoing expansion, a la its splendid cousin American Truck Sim, rather than our getting a separate Putin Truck Simulator at some point. Question is, how different does St Petersburg feel from Swansea and Stockholm?

Quite a bit, actually. Granted, some of this is coloured by the SCS games' overall 'any culture you want, so long as it's stark' approach to lighting and stripped-down cities, but a few tours of Russia's second city and its surrounding countryside have both met and busted my Mother Russia expectations. In short, because I am an ignoramus, I expected brutal buildings, time-lost fashions and sinister government propaganda. 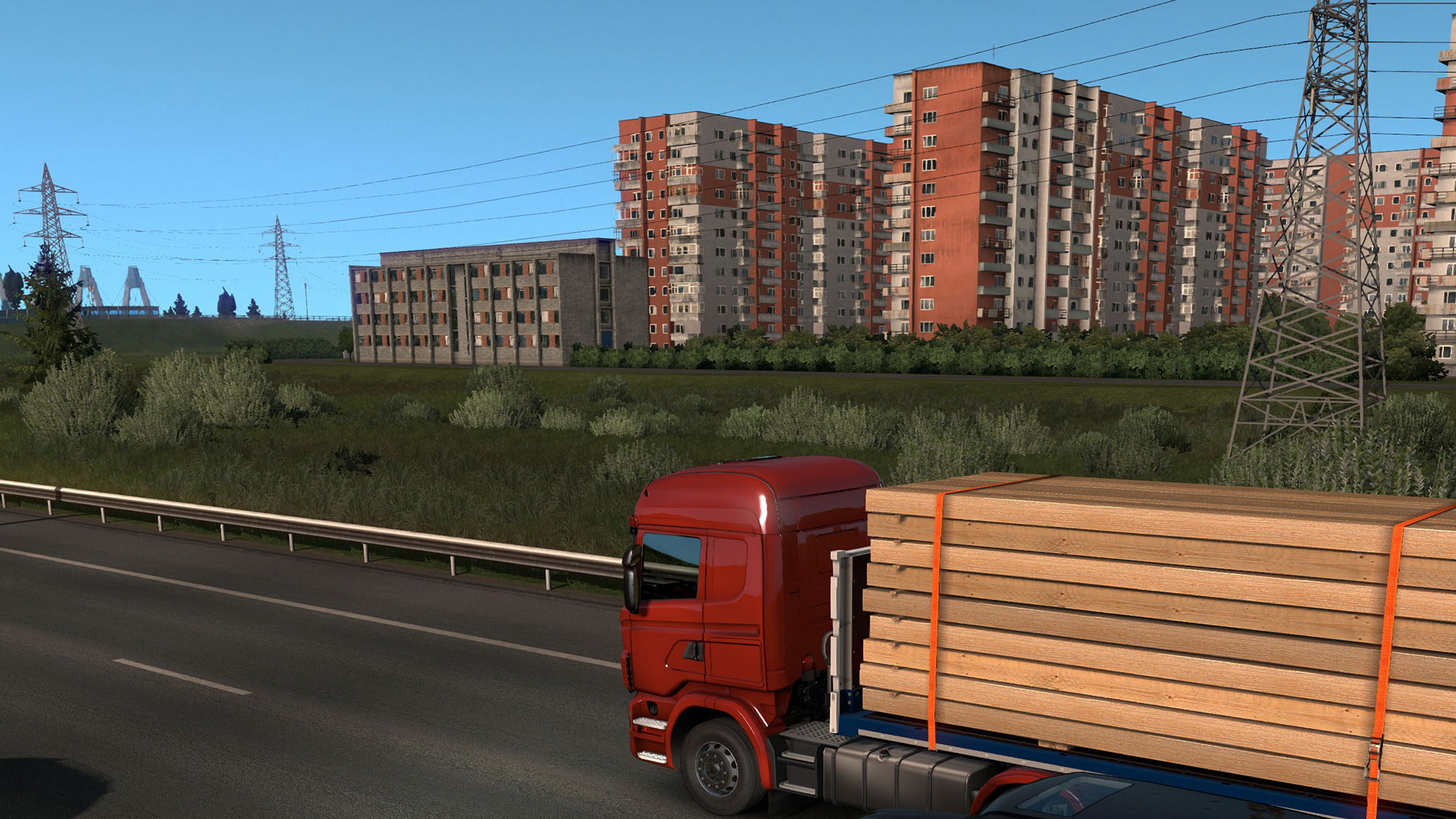 The former is true - squat, cruel rectangles, which in gaming terms evoke City-17 and Pripyat feels, abound. I let out a particularly big, bleak chuckle at the preposterously miserable HQ you're given if you start a new career in Russia: 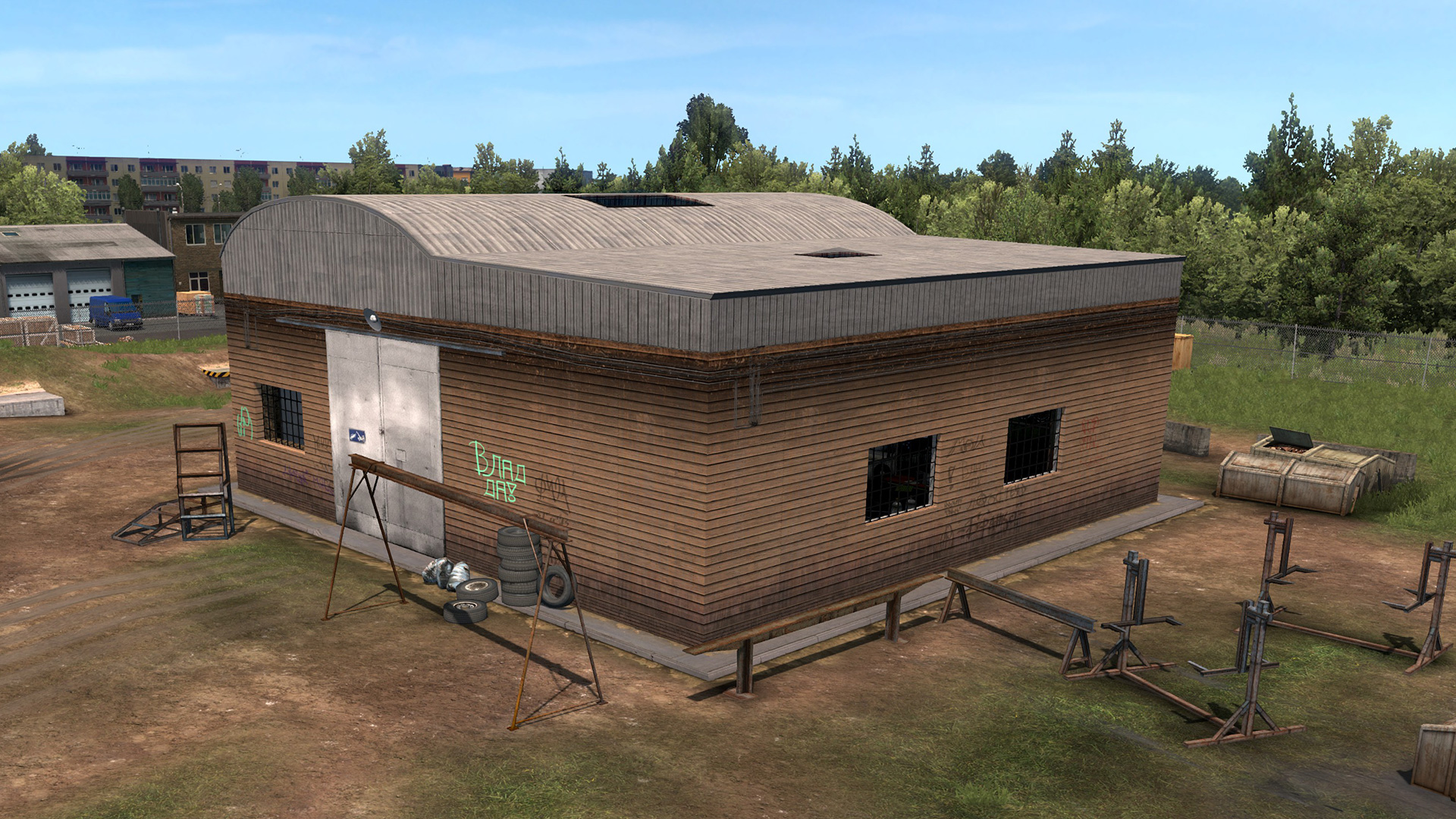 This architecural dourness is, however, very much offset by huge expanses of gorgeous, forested countryside, which Russia-set games and movies hadn't really prepared me for me. A very pleasant and tranquil surprise indeed. This makes Russia feels like a bigger, less populated place than most of the ETS territories to date, but it's also mesmeric in its contrast between the most overtly man-made structures imaginable and all those trees. 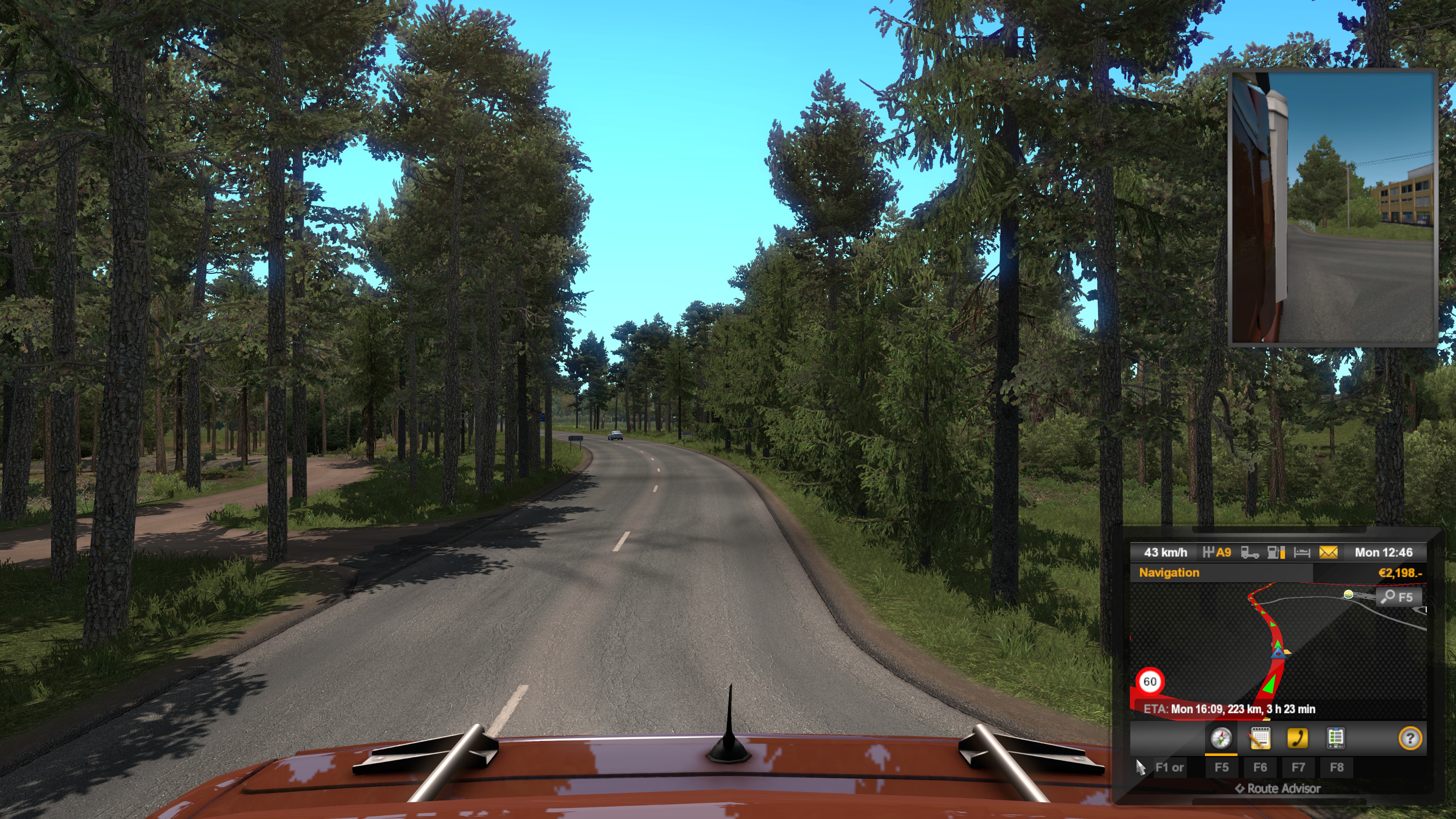 No Putin posters, however, but I did see an incredibly creepy billboard advert for cake - creepy because a) it was seemingly just for cake in general, not a specific brand, shop or cafe, which is almost certainly an encrypted KGB codeword b) it was accompanied by a picture of three biscuits: 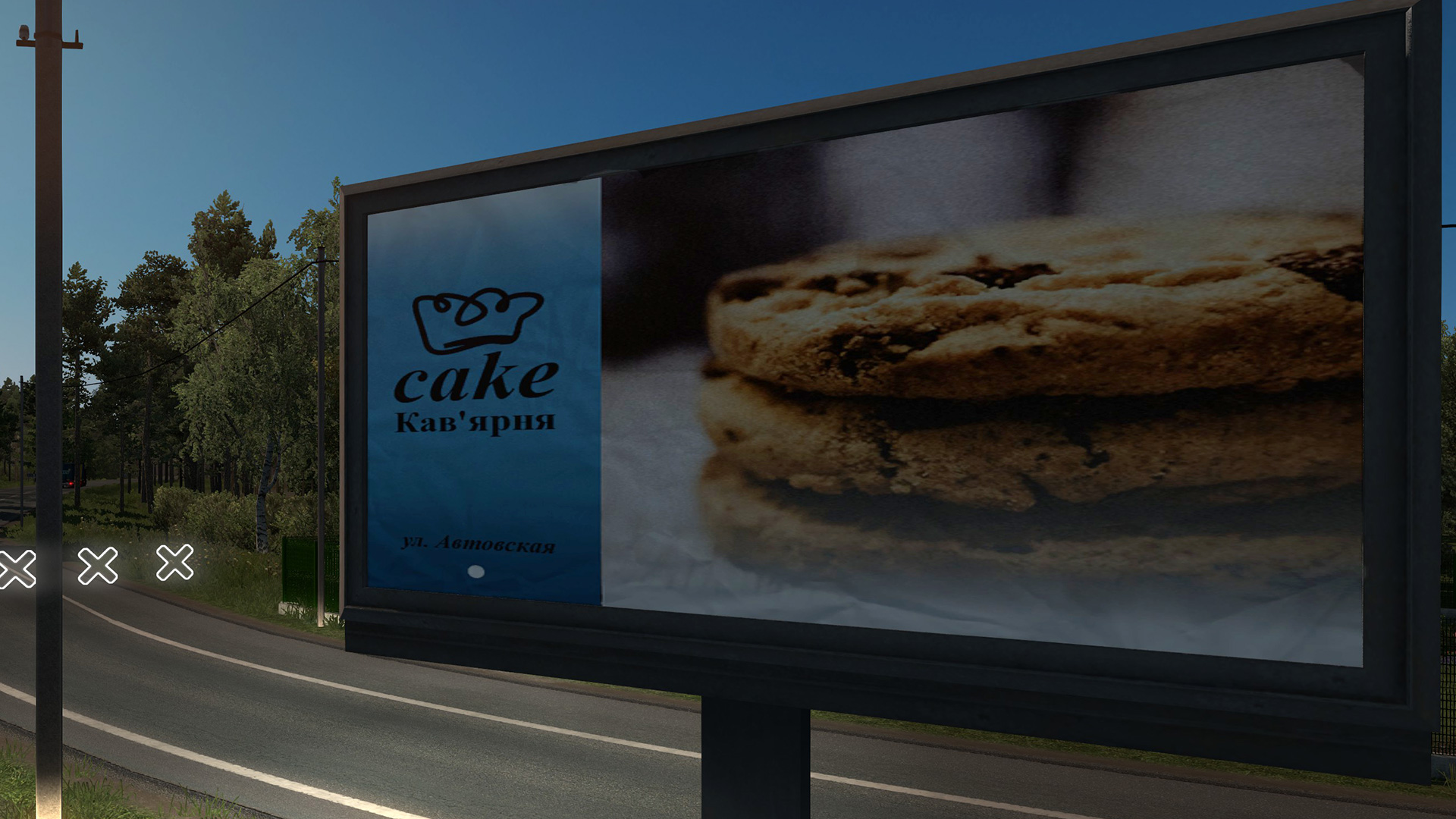 The thing that really baked my noodle, however, was that the road signs were not only in a different language, but also a different alphabet. 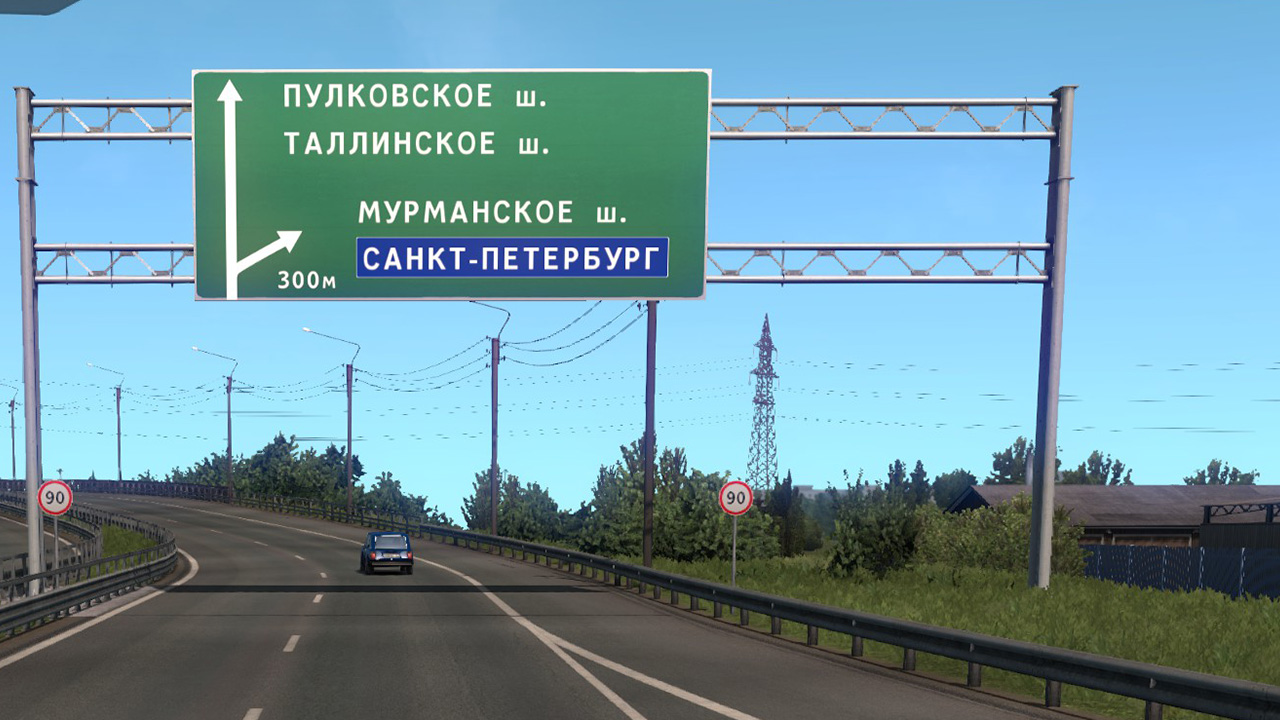 I felt more than ever like a strange driver in a strange land - figuring out where St Petersburg is by the shape of the word rather than the characters within, and having no idea where I was in relation to anything else (unless I looked at the map, but that's cheating). A glorious kind of lost. This is what I want from any new Truck Sim expansion: a feeling of being somewhere new.

Between the horrible buildings, the massive forests, the indecipherable road signs and the false cake advertising, I totally got that 'where the hell am I?' mingled excitement and anxiety I usually associate with getting on the miserable 90-minute courtesy bus ride from the airport. 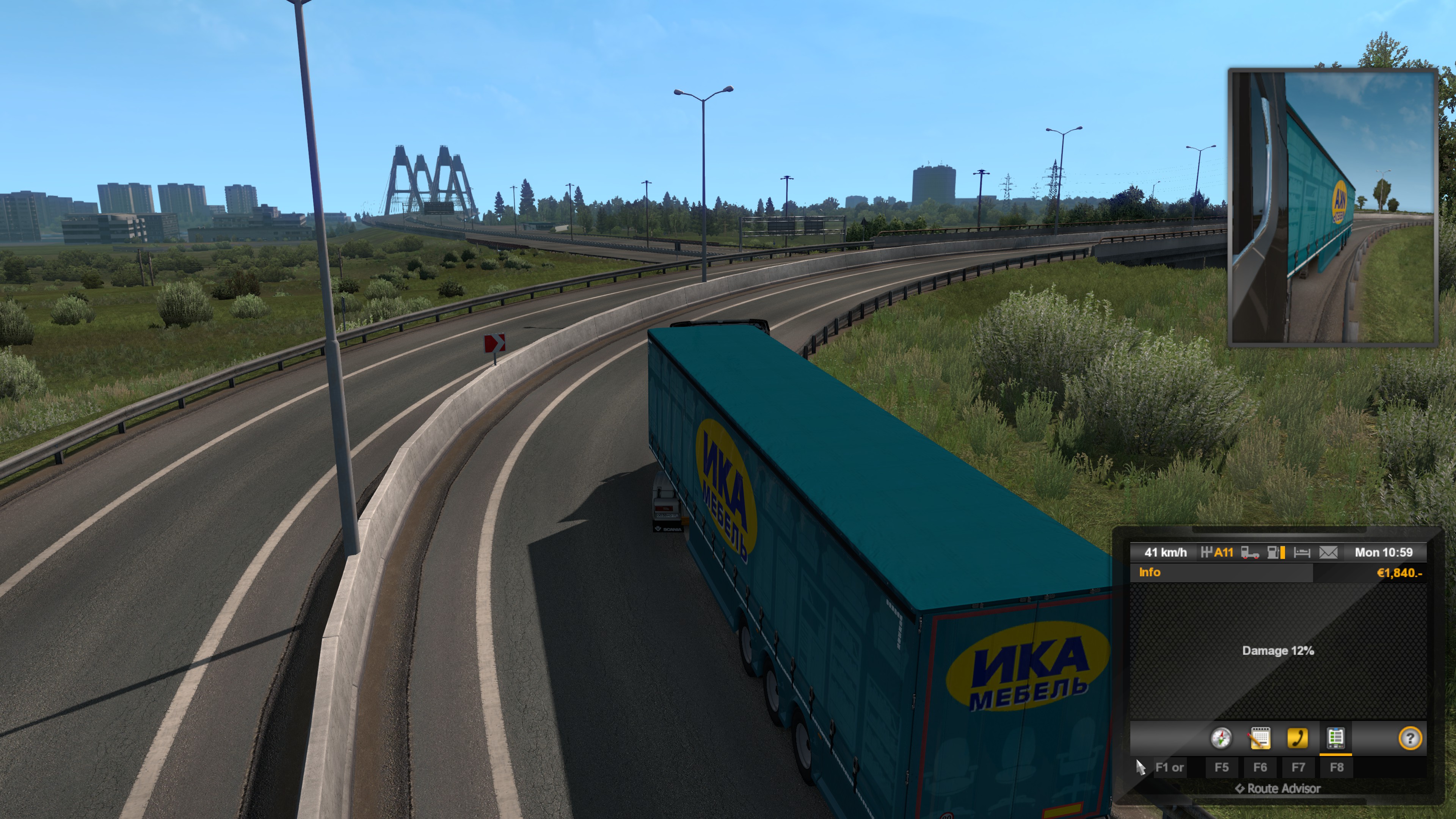 That said, St Petersburg itself is a bit of a wash - more a collection of scenery locked behind those notorious ETS/ATS invisible walls than a place you can explore. There's a sense of distant immensity, but that's about it. However, the roads do occasionally yield striking sites, like this singularly Russian (war?) memorial. 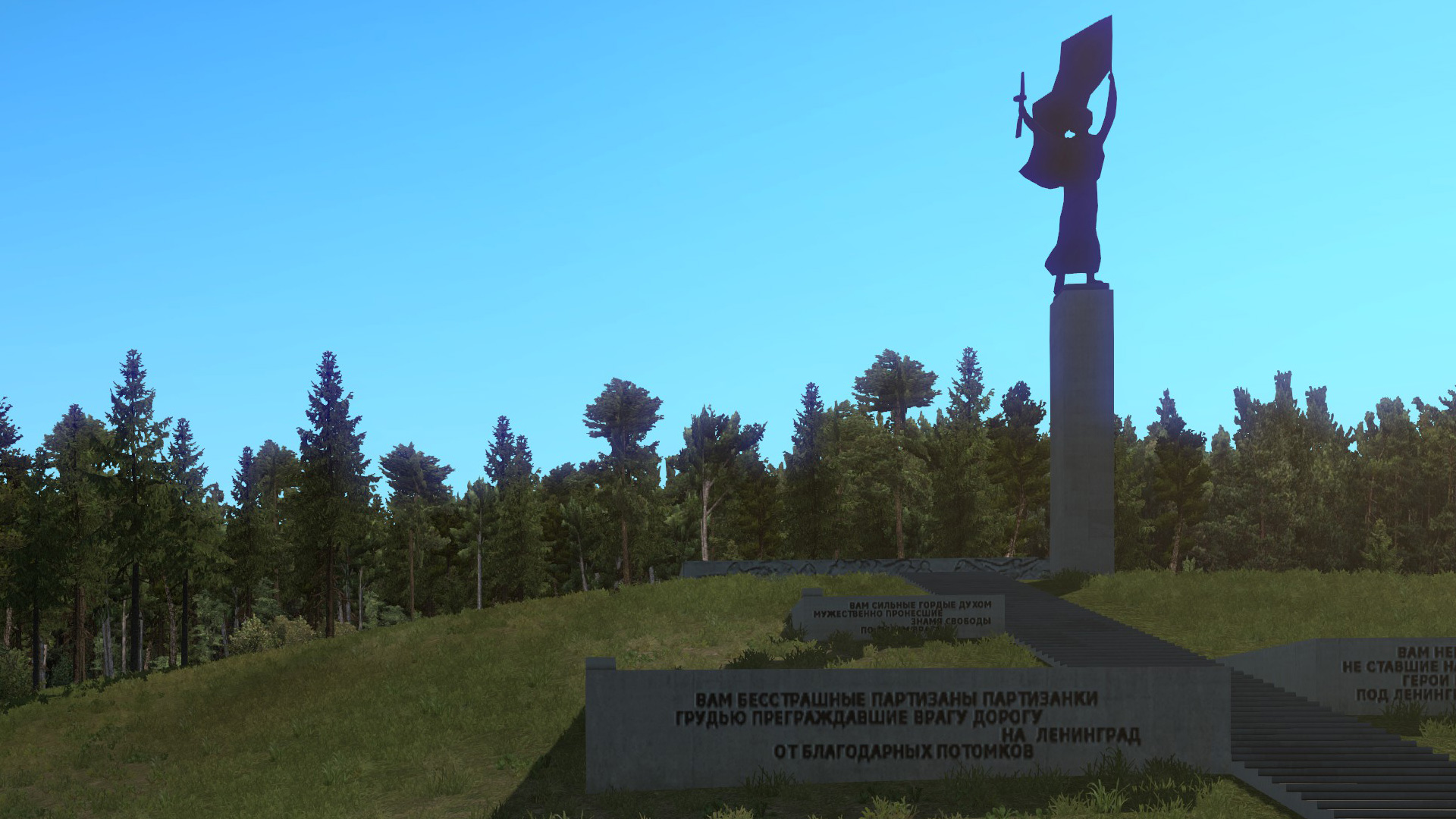 You wouldn't find that in Reading.

All told, ETS 2's first taste of Russia feels a promising step into the relative unknown, a far cry from the pretty as a postcard nature of the recent Italia expansion. If it ever makes it to Moscow though, it really needs to get cities right first.

*Gag credit: Matthew Castle. But hopefully you will never read this footnote and presume that I am a genius.