Every year at EGX Rezzed RPS curates a room of games, and this year we've prepared something a little different: five games you can't play anywhere else, featuring custom controllers and game-making AIs. Read below for more on these unique and fabulous experiences.

Angelina is an AI that makes games, and it'll be making games live at EGX Rezzed with your help. You can stop by to watch it design levels and run tests, or you can press a button to help it be a better designer by introducing new concepts ("like armadillos", says creator Michael Cook's post about it) or to suggest ideas for games. If you're not at the event, you can even interact and influence Angelina's work over Twitter. 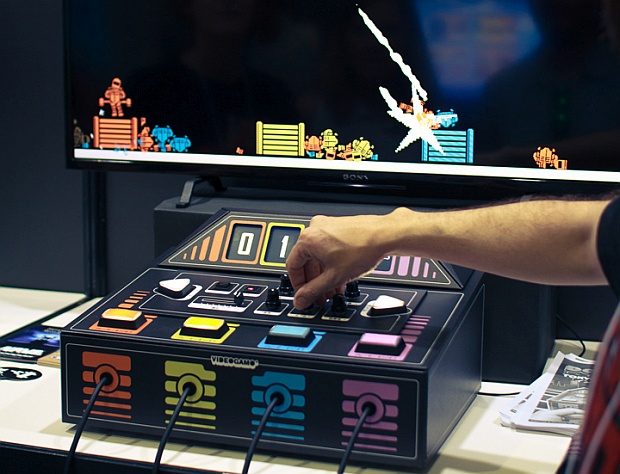 A videogame console specially designed for parties, in which four players compete in a variety of party games using two-button controllers while a fifth person takes on the role of a "Game Remixer who can change the variables of the game in real-time." Graham was lucky enough to play Dobotone at Indiecade in LA in 2016 and we're thrilled to have the machine and its creators at this year's Rezzed.

A two-player game in which one player is the doctor, who sits in front of a screen and scans through a human body to find infections, and the other is the surgeon, who must apply the correct medicine to the correct part of the patient according to the doctor's instructions. It's a little like Keep Taking & Nobody Explodes crossed with the boardgame Operation, and we've got a new and improved version of it.

Brush your teeth, kick a ball, do a fart, rock out: Tenya Wanya Teens asks two players to perform these actions and more, with each request being colour-coded to correspond to a section of a 16-button controller. What starts simple turns frantic as players race to perform each action before their opponent in order to score points and as the buttons on the controller keep changing colour. Soon you're accidentally showering, peeing at inopportune moments, and laughing along whether you're doing the correct actions or not. Tenya Wanya Teens is something of a custom controller classic, created by Keita Takahashi (Katamari Damacy, Noby Noby Boy) and Wild Rumpus in 2013. EGX Rezzed is its first new showing in years.

The World Is Flat

The game gives you a country, a globe map, and asks you to go find that country. The hook: you're rotating the in-game globe by spinning a real-world yoga ball. The yoga ball is sat on a cradle made from two regular mice, and it's superbly satisfying to control the game with such a 1:1 control method.

RPS will be all over EGX Rezzed, interviewing developers on stage such as Matthew Davis of Into The Breach and the developers of American Truck Simulator. We'll also be down the pub. Come along!