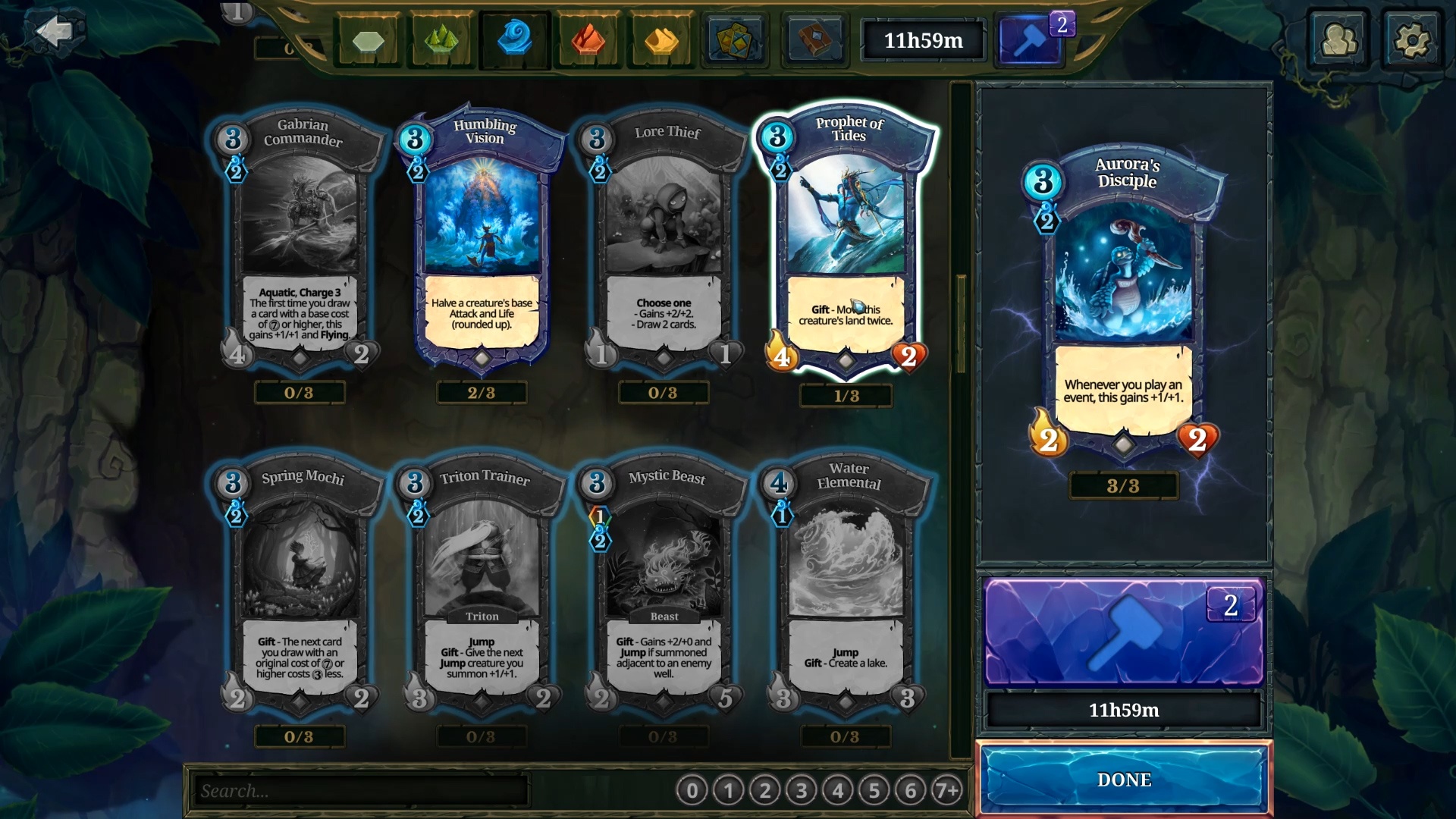 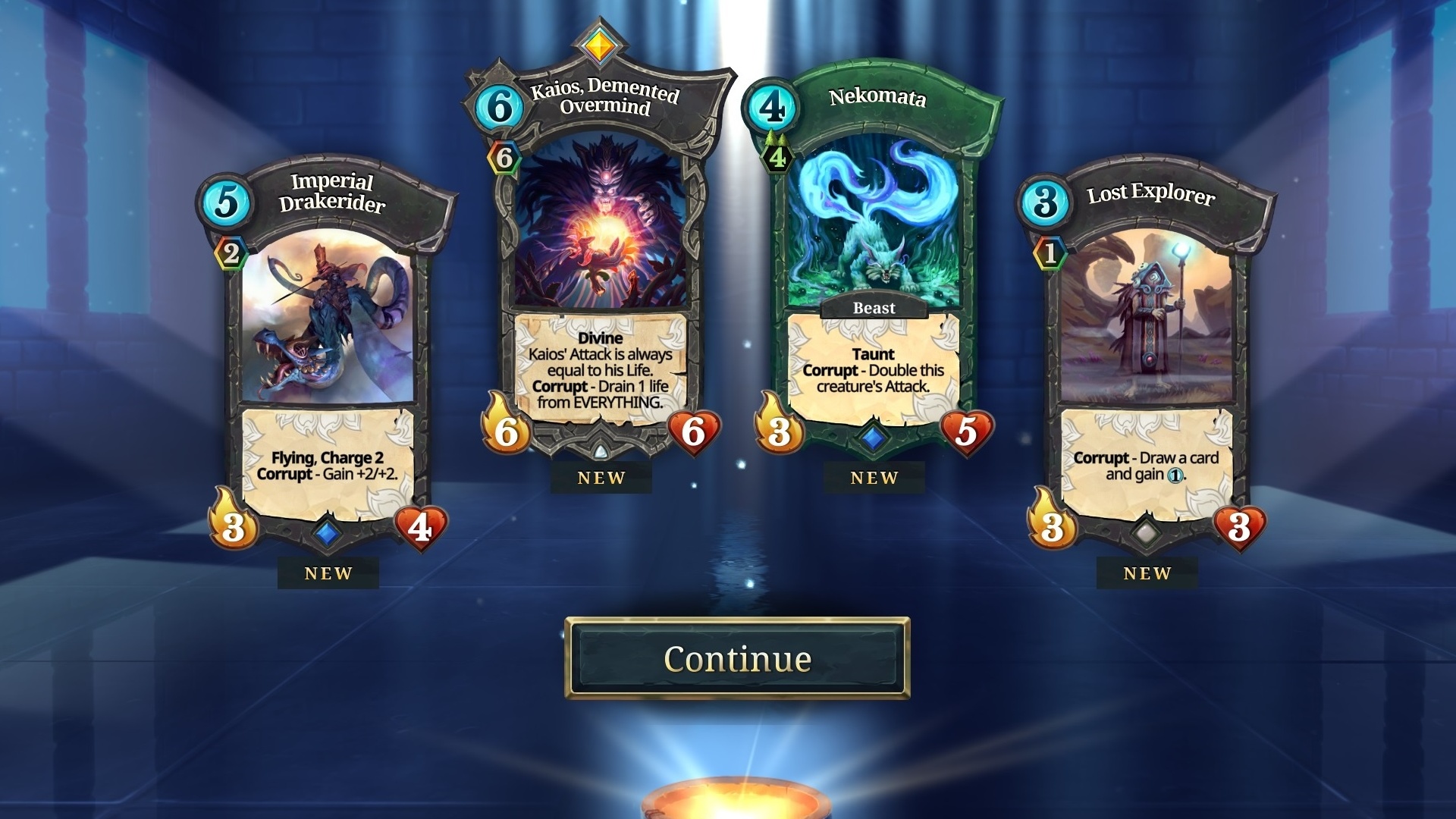 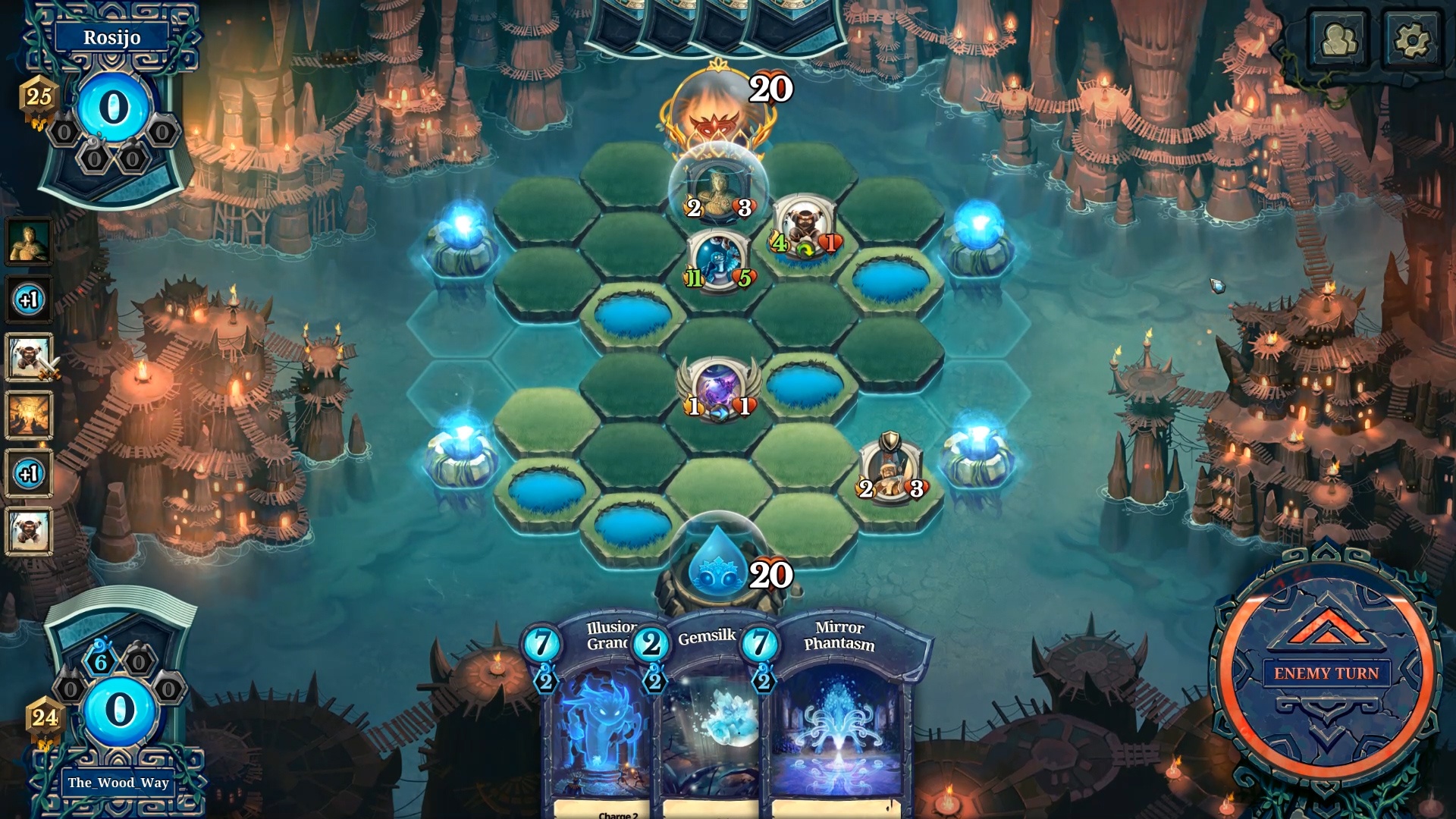 Every digital card game has to have a party trick. Hearthstone's party trick is being Hearthstone. Ta-da! Meanwhile, The Elder Scrolls: Legends cut its board in half, which some might say is a drastic approach, but fair enough, it got my attention. Shadowverse added the ability to evolve minions, and made many of these minions cute anime girls.

Faeria's party trick is a clever board system where you place tiles of land for your minions to walk on. It's significant, then, that the release of the Fall Of Everlife DLC expands that board-building mechanic through new minions that apply it in creative ways. Oh, and it's a buy-to-play card game now instead of a free-to-play one.

In Faeria you place tiles of land on a hexagonal grid and move minions across those tiles so they can punch your opponent in the face. Your land determines what cards you can play and where you can play them, like near the mana-generating wells in the corners of the grid, so controlling territory is your top priority. The new keyword in Everlife, 'Corrupt', means that a minion does something the first time it steps onto a tile of enemy land, which feels right at home in this system. Corrupt minions might draw you a card, generate mana, gain extra stats or even take control of a tile of land. Whatever the case, Corrupt minions reward you for invading enemy territory. It reminds me of the turnaround moments you get when you promote a pawn in chess: Corrupt emphasizes out-maneuvering your opponent and creates alternate lines of attack. 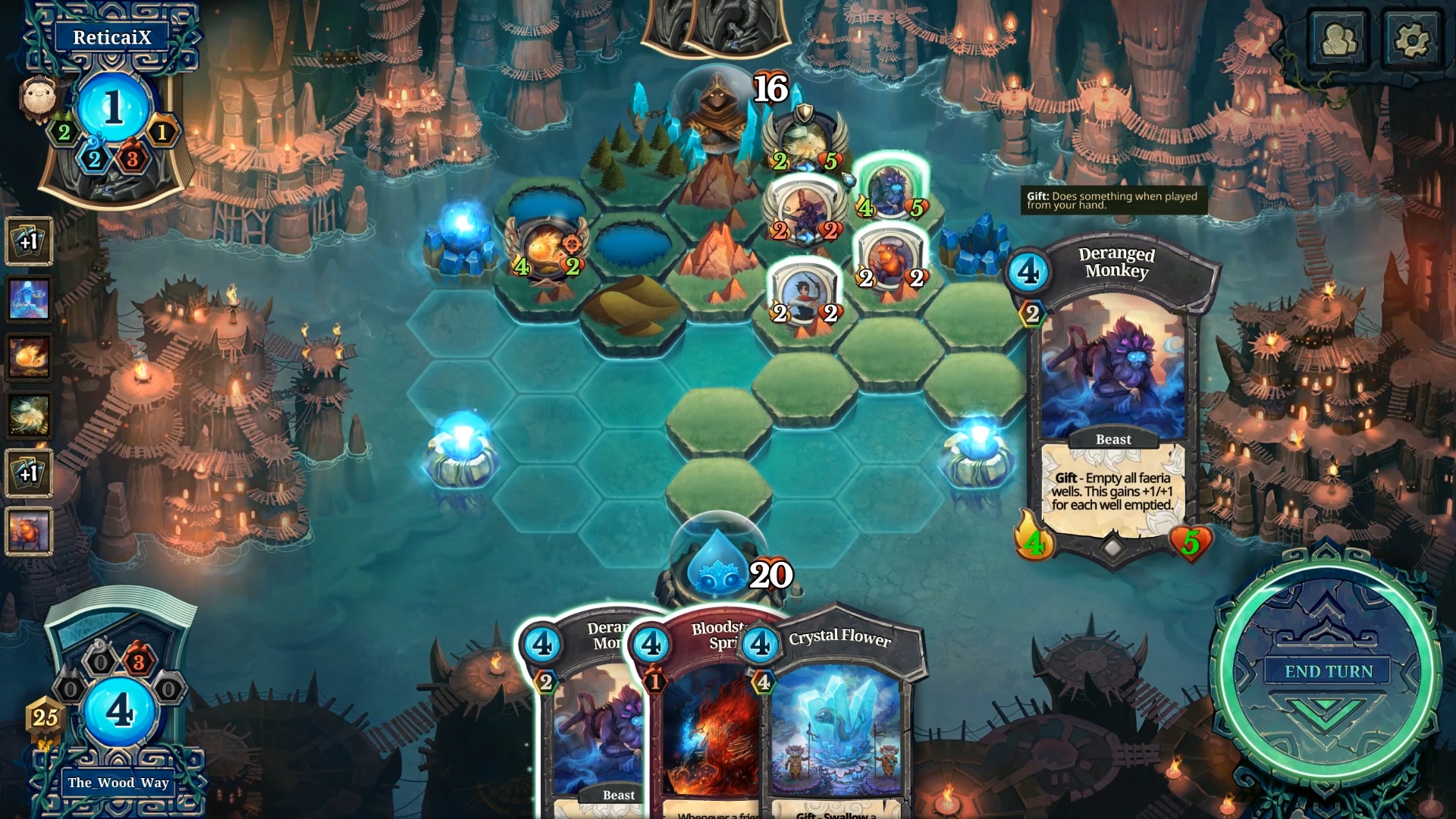 Flashy Corrupt cards, such as the new legendary that drains life from everything, are undoubtedly neat, but my favorites are minions that are good to begin with and get way better if you use them well. Take Rotting Boar, a perfectly playable 5/4 whose Corrupt ability draws you a big minion from your deck, or Monstrous Hydra, which summons an army of little hydras when it enters enemy land. Then there's my personal favorite, Shadowsilk Faerie, which is so damn good that it had to be nerfed. It's just an itty-bitty 1/1, but its abilities make it hard to kill and easy to Corrupt, and when this little guy enters enemy land he draws you two spells, which is extremely potent in the burn decks I like to play.

Even outside of Corrupt, the cards in Everlife are less reliant on card game clichés than the vanilla card pool, and they do a better job leveraging what makes Faeria special. Again because I'm a dirty aggro player, I love the new neutral card Deranged Monkey, which empties all the mana wells when it's played and gains bonus stats for each well emptied. This is perfect for aggro because if I'm playing aggressively, I'm not going to focus on collecting mana from the wells. My cards are cheap, and I'm more concerned with the condition of my opponent's face. So instead of building land toward the wells and putting dudes there to farm mana, I'm going to march right toward that beautiful, punchable face, which means more open wells for Deranged Monkey to empty and a path for him to march down. It's absolutely degenerate, and I love it.

If you're looking for your next - or first - card game obsession, read our guide to the genre for a breakdown of how the big games compare.

It's also exciting to see Everlife adding more rainbow minions - at least, that's what I call them. Basically, you have to put a certain number of coloured lands on the board before you can play these minions, but those lands can be any colour. Like, let's say I want to play a two-land yellow minion. To play it, I need to place two desert tiles on the board first. However, to play a two-land rainbow minion, I could have two deserts, two forests, or one desert and one forest, or two of whatever colour land my deck is running. Rainbow minions are more difficult to play than blank neutral minions without any land requirements, but they're also more powerful and much more interesting. And from the looks of it, the second batch of Everlife cards released on August 21st contains even more rainbow minions, plus some multi-colour ones, which is great seeing as how mono-color decks have pretty much always been dominant, despite being less interesting than dual-color decks.

But new cards are only one part of Everlife. The DLC also totally rewrote Faeria's economy. The base game now costs $25 and Everlife itself is $14. Notably, veteran players were automatically upgraded to the paid version and don't have to buy the game, and the economy changes aren't locked behind the DLC but were automatically added in an update that launched alongside it. For another $14 you can purchase a premium package which permanently doubles your experience rates, or you can get the whole shebang for $40, which is a fair bit to ask when all your competitors are free. That said, Fall Of Everlife did more than hike the price up: it also made earning cards more deterministic.

You can't buy card packs (or battle chests) anymore, but the packs you earn through login bonuses, daily quests, and by leveling your account no longer contain duplicates, meaning every pack you open is four guaranteed new cards for your collection. Naturally, with duplicates gone, Faeria's old Memoria dust-based crafting system had to go too. Now it's time-based: every 12 hours you get a crafting "charge" that you can spend to instantly craft a card you don't have. You can only craft common cards at first, but as you level up you unlock the ability to craft rares and epics, though you cannot craft legendaries. 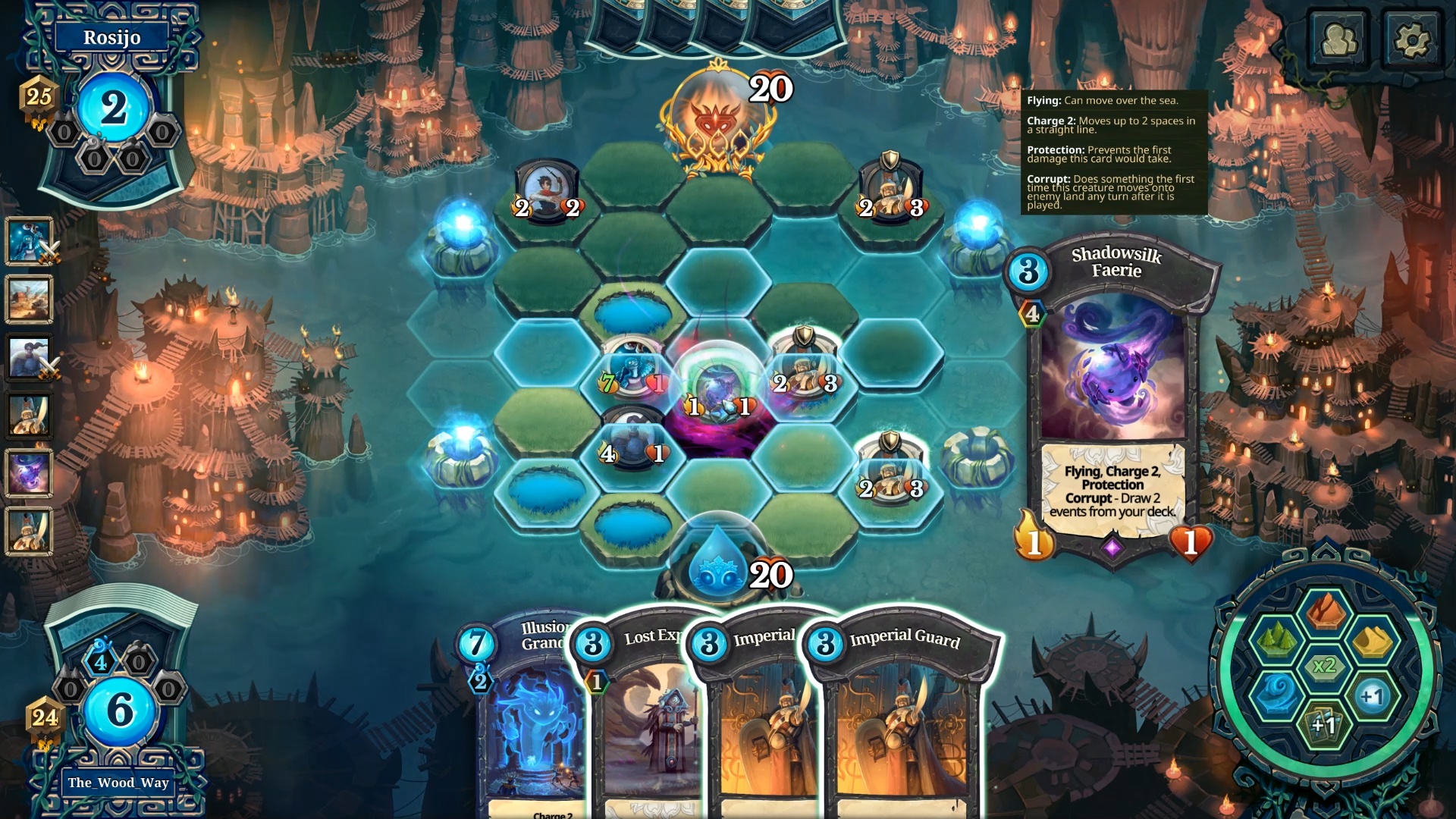 It's an odd mix of free-to-play trappings and buy-to-play practices, and it doesn't always work. The crafting charges are billed as a way to spot-clean your collection but you only get two charges a day, you can only hold three charges at once, and you only start off with three. I understand the need to put a leash on crafting in a system like this, but I desperately wish I started with, say, 10 crafting charges that I could use to experiment and fill in some decks early on. Crafting three common cards and immediately getting slapped with a 12-hour timer is a total buzzkill. Apart from that, paying $14 to double your experience rates is textbook free-to-play chicanery and undermines the shift to buy-to-play a bit. Yes, the premium package comes with some cosmetics, but we all know why we're here.

That being said, like the rest of Faeria, the more time I spend with this system, the more I like it. For starters, I know exactly what I'm getting for my money, which is something I can't usually say when shelling out for card games. Faeria's new entrance fee might sound like a lot to some players, but that $25 goes a lot further than it used to. Getting all the cards under the old system would either cost considerably more or take way longer, and I'd much rather pay a lump sum than be nagged by stingy mechanics. Yes, I still have to invest a fair amount of money and time, but it feels like the new system puts it to better use.

And I'm happy to put the time in because Faeria is not only fun, it could honestly pass for a single-player strategy game at this point. Strings of NPC battles called missions can now be played for free, and so can the sprawling story-based Oversky mode. Add in some clever puzzle challenges and you can have a lot of fun without ever setting foot in ranked play if that's not your bag. If you like Hearthstone's Adventures, I'd recommend Faeria for the solo experience alone.

Faeria's land system is already a wild card and a half, and it just keeps doing weird stuff that I don't expect from card games. Its latest DLC doubles down on that weirdness and is better for it. The buy-to-play business model also feels like the direction digital card games may be headed after years of being increasingly refined Skinner boxes, particularly when you consider Valve's upcoming card game Artifact will also be buy-to-play. I don't think Faeria's implementation is the final form, and I have no idea if it will pay off in the long run, but I'm thankful they're trying.