Overall I'm a huge fan of Fallout 76's loading screens, which often select a picture that you've taken in the photo mode to display as you're waiting. Having a little reminder of a past moment while you're stuck not doing anything else is a nice way of reflecting on cool stuff that's happened in the game. Except that oftentimes my pictures aren't cool moments. A lot of them are just pictures of dead things. Dead brahmin. Dead scorched. Dead other players. It doesn't exactly make for great memories, but it's not my fault! Let me explain myself.

My first several hours playing this game have mostly been wandering around taking photos. This is a common starting point for me, most recently replicated in Assassin's Creed Odyssey. But unlike Odyssey, 76's world is online, meaning it's constantly moving. You can't just pop open the camera to have everything stop in place. Plus, getting into the photo mode at all requires two button presses, so there's absolutely no chance of catching a shot right where you need it. Sometimes you can chase around a frog for several minutes to get a lucky snap, but it's still poorly framed and from a weird angle: 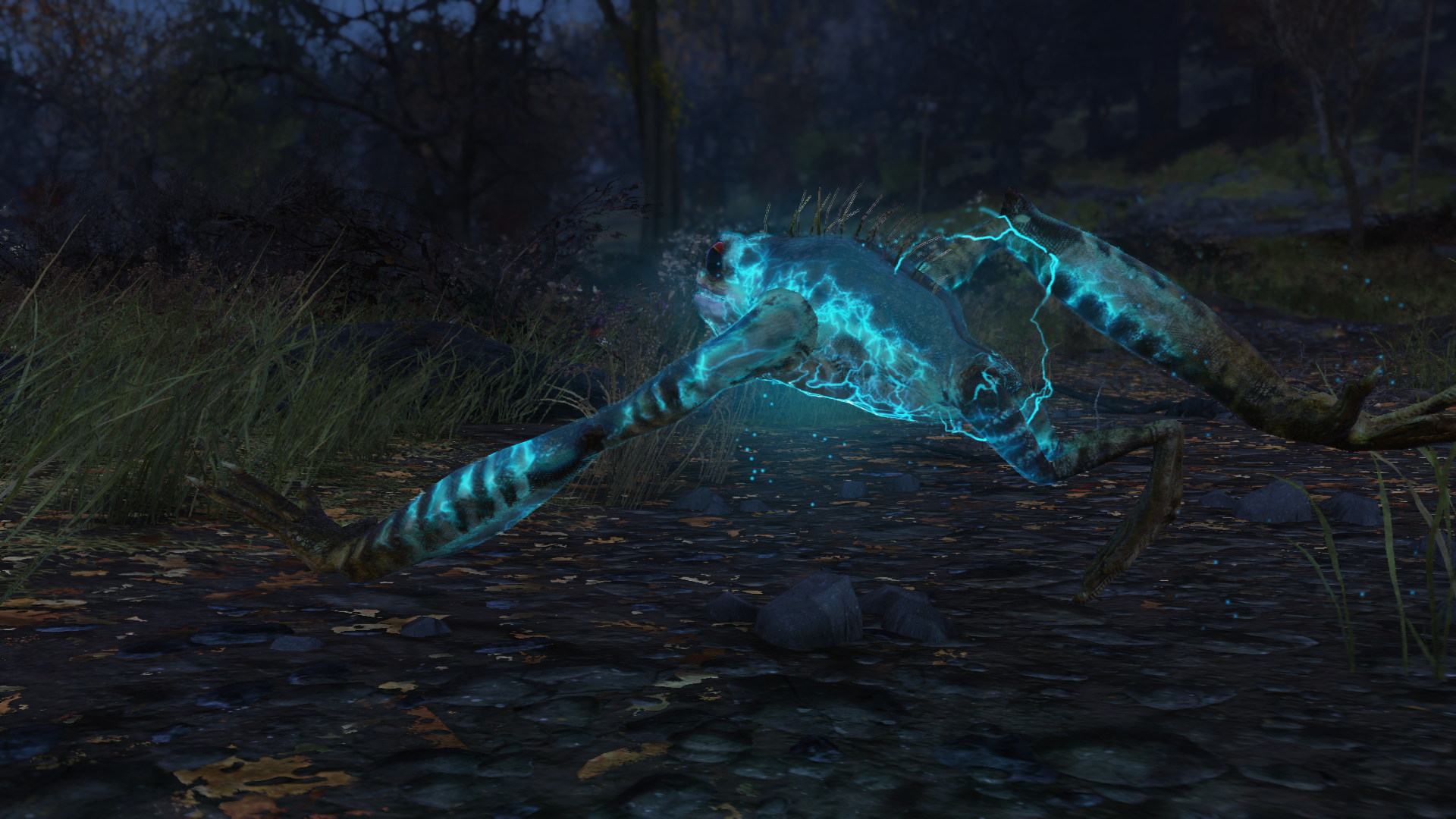 So, usually, I've been stuck with capturing the models that are still - the dead ones. It's a fine way to document the wasteland and its many inhabitants, but when it comes to the loading screens the overabundance of blood and corpses isn't actually reflective of my time in the game, just a side effect of how it's built. 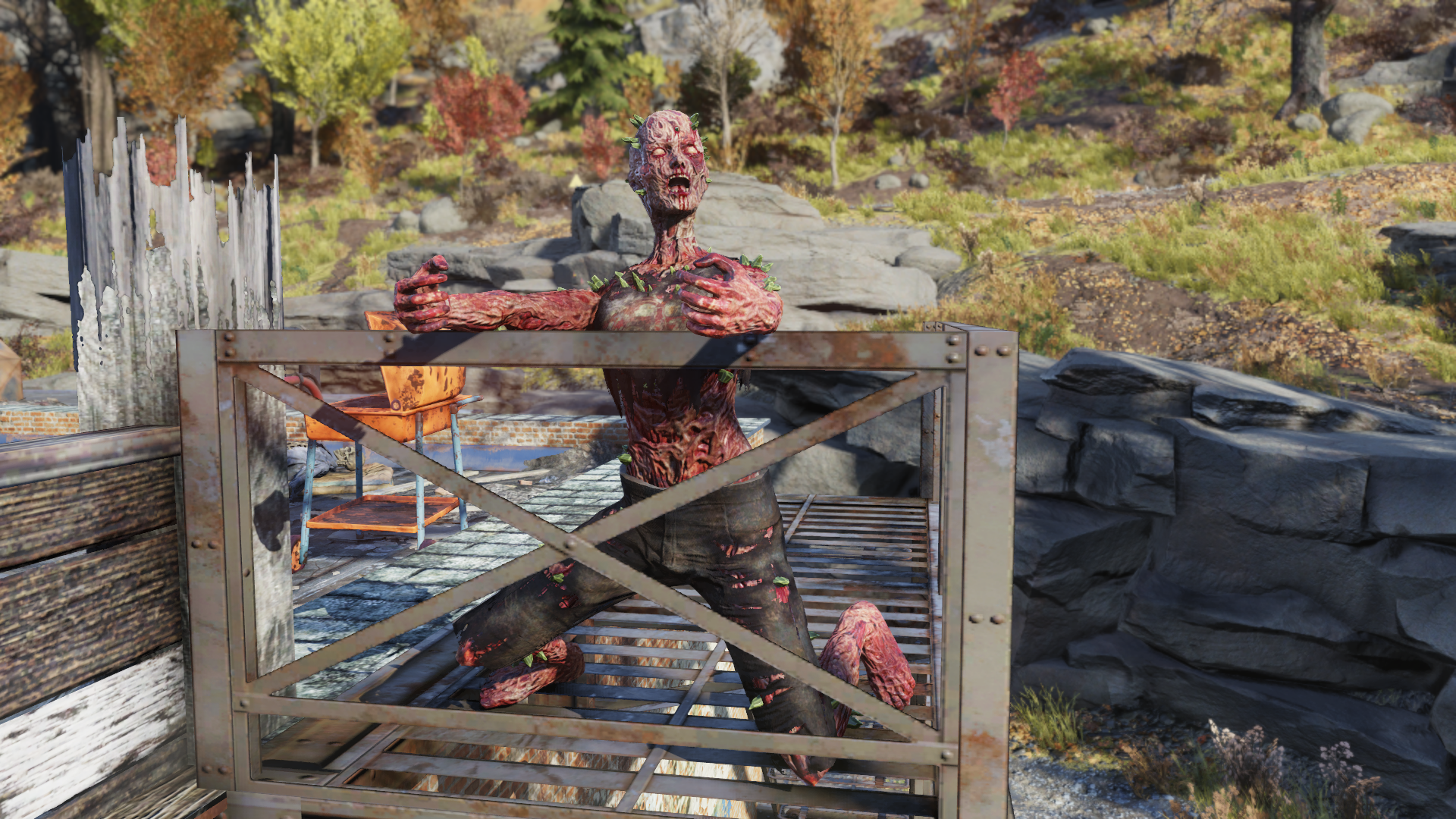 There are, admittedly, some shots where this works - this is a wasteland, after all. I've taken just as many skeleton photos as the next person. 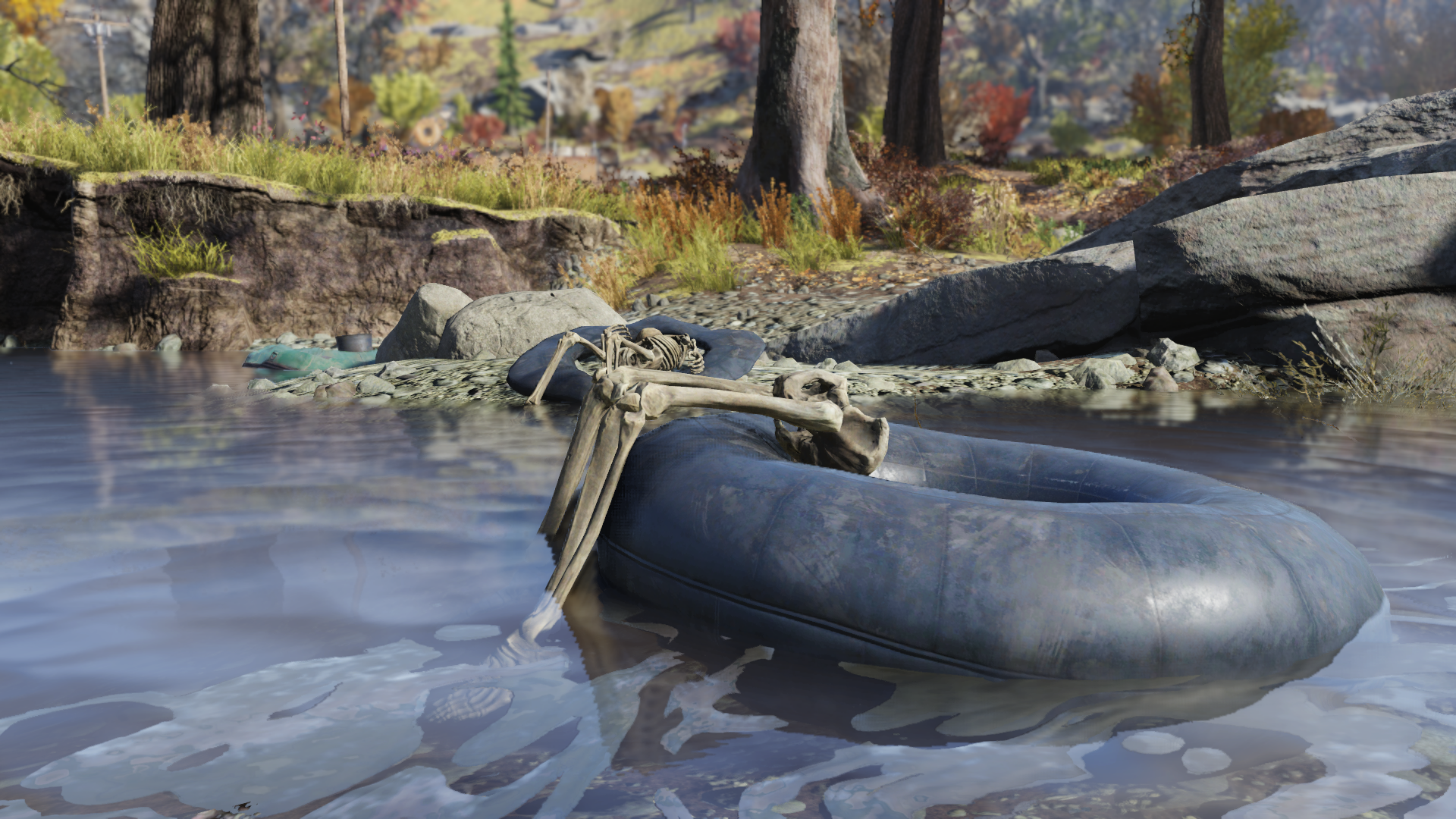 And I especially like it when the focus is less on the dead people and more on what's been left behind. 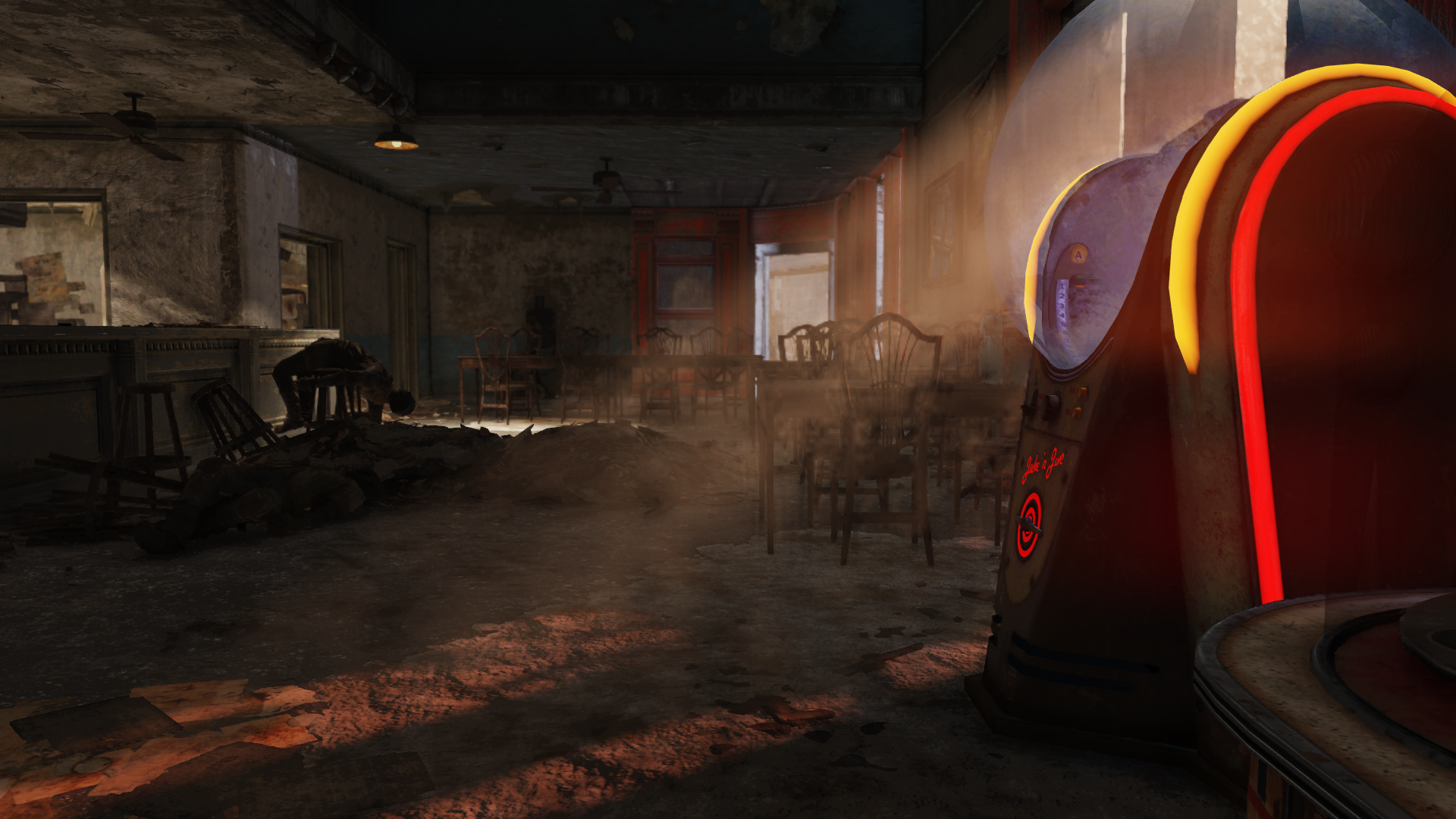 But Fallout doesn't know a butchered mongrel from a beautiful vista, and just statistically it's more likely to throw up one of the former. I know that this means I should focus on taking more actual nice shots and not ones too gory to add to this post, like John Robertson's been doing with his adventurer Milly, but there's just something about Fallout that makes me more interested in the weird mutated animals than the pretty trees.

Take brahmin for example. Do you remember brahmin being this cute? I wish this was a short video, because the way they flick their ears is especially endearing, but look at them. Look at them!! 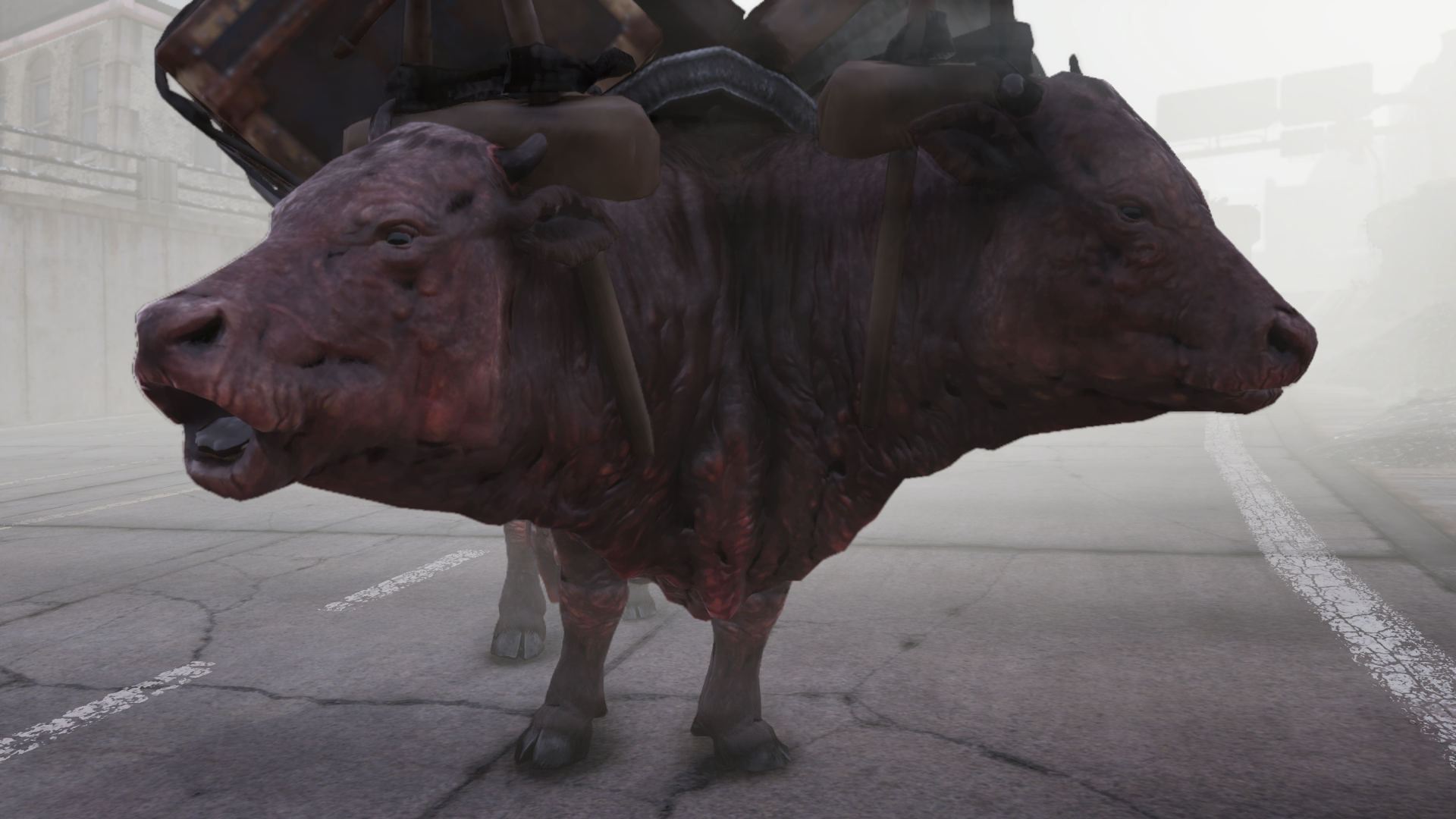 And yet not many of them are willing to pose for the camera, so I just end up stuck in a loading screen with my sixth consecutive shot of those terrifying petrified corpses. Times are truly tough in this post-apocalypse.