Skipping a whole number for this year's iteration of the popular farm-'em-up, Giants Software is looking to the future with Farming Simulator 19, which has just been announced for release this Autumn/Fall. By the sounds of it, it should be a  comprehensive update, with a "complete overhaul" of the graphics engine, new crops and farming activities, plenty of shiny tractors, and horses. You can hear a solitary neigh in the CGI reveal trailer, before a man opens a barn door and then that's all she wrote.

When the game has bolted from that barn door later this year, it'll offer three open worlds in which to develop your farm, either alone or with some green-fingered co-op chums. There'll be a revamped South American climate, which they say has been gussied up to take advantage of the newly prettified engine, and another two fertile lands the developers has yet to reveal.

The most recent of the Farming Sim series (at least on PC) is 2016's Farming Simulator 17, which you can grab cheap-ish in the current Steam sale if you're quick. That game was recently embiggened with its Platinum expansion, which allowed you to till the land, to tip the cows, and generally to endure the baking heat of South America. It seems we'll be heading back there for this year's entry, where we'll hopefully accrue a load of bonkers farming equipment like this lot: 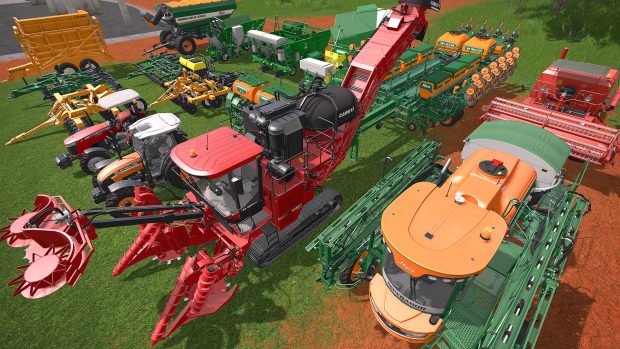 I tell you, there's a very thin line between Farming Simulator and MechWarrior.