The plan was idiot proof. One of us would lob the flares we’d snagged from the church tower to distract the bipedal machine almost as imposingly tall as the church itself, while the other sprinted toward a nearby car and dumped out a backpack full of gas canisters. The firearms we’d collected were so many makeshift plastic straw pea shooters against the hulking automaton’s thick armour plating. We were counting on the hope that a well placed round dumped into one of the canisters would result in enough boom to put the machine down for good.

These are the sort of scrappy, improvised plans Generation Zero’s game director Emil Kraftling hopes players will come up with when Avalanche’s sci-fi tinged Swedish shooter launches March 26th. If, like me, you looked at the game's early screenshots and worried those empty barns and expansive Swedish forests signalled another DayZ-style survival game, then fear not. Though XP-based character progression and acquiring resources are both involved, this isn't a game where you'll die of thirst if you don't sip bog water every few minutes.

“You’re very much an underdog.” Kraftling tells me. “But the enemy is not the environment itself.” 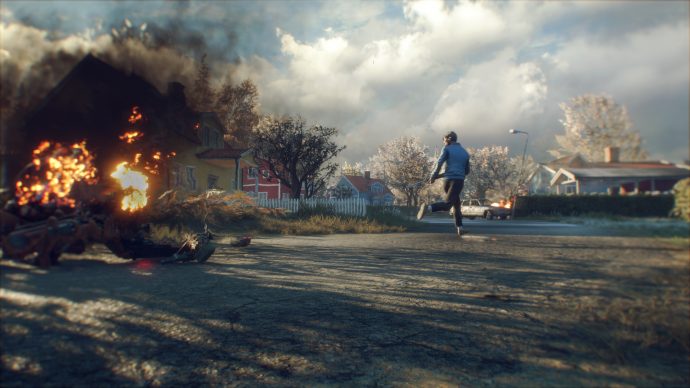 I may or may not have brought my hands together in silent praise to the gods of genre cliche as Kraftling stated that Generation Zero features not a single thirst or hunger mechanic, instead finding its antagonists in “strange big machines that are clearly out of your league.”

Oh, talking of winnable fights. Yes. My three co-op partners and I - the game supports 1-4 people - did manage to take down the tank-bot, although not quite how we’d planned. It completely failed to take the bait, and I ended up dropping a gas canister at its feet, panicking, and blowing both it and myself up in the process. As I said. Idiot proof. Undeniable proof that I am an idiot. 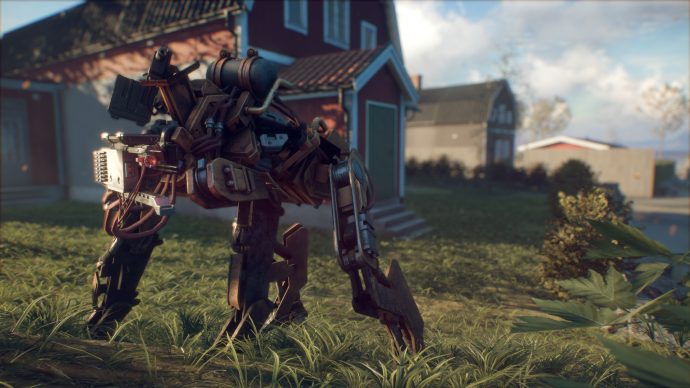 Both the highs and lows of my two hour hands-on with Generation Zero at Avalanche’s Stockholm studio were similar to Dominic’s impressions of the beta. The barren loneliness of the abandoned cold war Swedish countryside, disturbed only by the occasional bird and the distant creaking of hostile machines, is still the game’s greatest asset. Gunning down packs of nippy quadrupeds as we ran through an abandoned castle was exhilarating, but it’s the spaces between the action that stuck with me. The constant eeriness and subtly oppressive chill brought about by abandoned villages and lurking danger, like a thin blanket of Scandinavian snow. The garish neon posters and other nods to 80’s pop culture left in abandoned villages. Far from cutting through the poignant gloom with unwelcome pastiche, these touches contribute to a sense of place once vibrant with youthful fantasy, now haunted by the chemical residue of hairspray and lingering reverb of ghostly power ballads.

The game’s lifespan, I got the impression, is going to rely on how long each encounter manages to stay challenging, or varied, to maintain this atmosphere of adversity. There’s currently six types of mechanical foes in Generation Zero, and if the solution to dealing with each boils down ‘engage in some fun if unremarkable shooting’ or ‘use explosives’, I can see that tension dissipating quite quickly. While each of the bigger tier robolads I encountered was imposing enough to qualify as an ‘oh shit’ moment, I’m not yet convinced it’ll be the same on the tenth, never mind the hundreth, encounter. 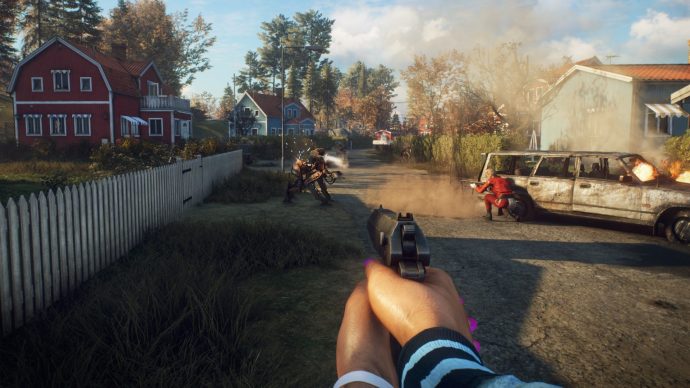 It’s also hard to comment on exactly how these encounters are going to play out, since the enemy AI didn’t seem quite where it needed to be yet. Though I didn’t experience any bugs as extreme as Dominic’s gravity-defying turbo grass, we did run into at least one completely broken quest, and at least one giant robot that decided to run away from me, then keep running away from me, despite the fact I had barely any means to damage it.

These were two standout incidents of jank in what was a largely smooth session, though, and although we were able to take out some of the bigger robots without too much trouble, this was whilst playing as high-level characters. Fightin’, questin’, and even runnin’ away like a giant 80’s chicken nets you XP in Generation Zero, which you can then spend to specialise your character along four different skill trees. Abilities range from the extremely useful, like pinging enemies for your team, to the uninspiring, like making your character slightly better at shooting things. 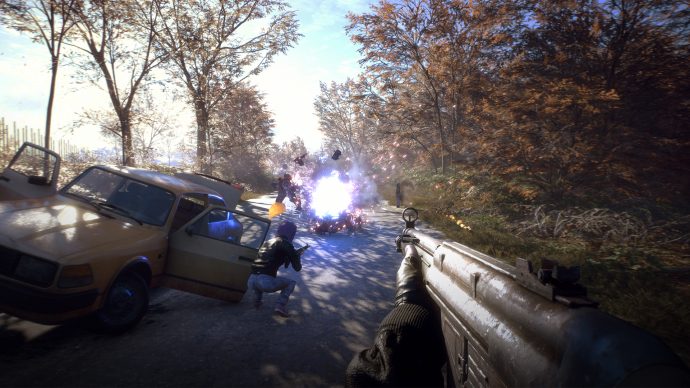 The jump from low to higher level characters changed the feel of Generation Zero significantly, and although having a backpack full of shooters diminished some of that delicious earlier tension, I can see it being hugely satisfying to work your way up to that point. The first guns you’ll find will be rusty and ineffective, with shinier firearms a rare prize for those willing to stick it out. Gunplay is enjoyable, but again, the main draw here comes from how singular Generation Zero’s setting is. For digital games, anyway.

If you haven’t been keeping up with the issues surrounding Generation Zero’s similarities to Simon Stålenhag's Tales from the Loop, here’s a quick rundown. After Generation Zero’s announcement trailer was released, many on social media pointed out the aesthetic similarities between the two settings. Stålenhag himself wrote on Twitter to clarify his stance on the subject.

“I’m sure there are other ways to do Swedish sci-fi that doesn’t look confusingly similar to the Tales from the Loop books and RPG.” Stålenhag finished. 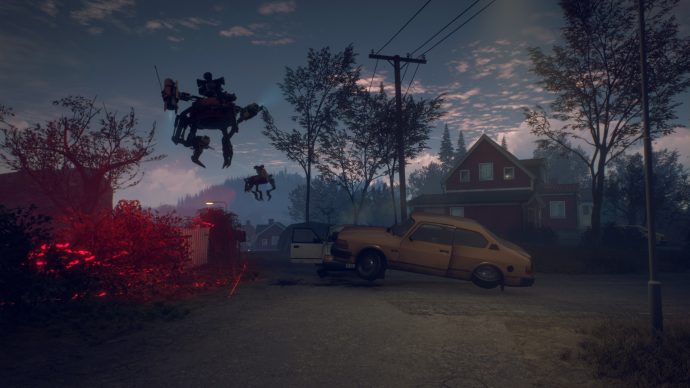 Speaking to Eurogamer’s Emma Kent, Kraftling “flatly denied” any influence, insisting that “Generation Zero is not and has never been intended to be a Simon Stålenhag game. His work has not been the motivation for - nor the inspiration behind - why we decided to create it."

Assuming this is the case, there’s an interesting question here, and one I asked Kraftling myself: what is it about this period of Sweden’s history that provides such fertile ground for this exact type of set-up? The loneliness and beauty of rural Sweden, the robotic threat, the guerilla bands of 80’s teens... 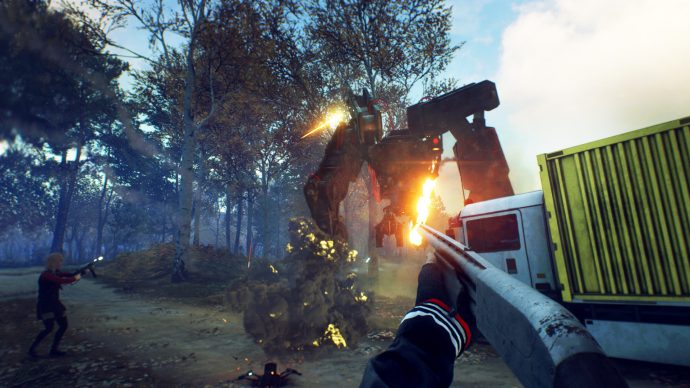 “The thing about Sweden really is, it was a melting pot," says Kraftling. "A border place in between East and West, so socialism has always been strong, and certain aspects of socialism had an impact on society, but still, there was nothing blocking western culture. So we watched western movies and listened to western music, and probably considered ourselves western, more than anything else. It was very exotic in a way, but in the same way it raised us. Red Dawn. Terminator. A fantastical escaping of reality, or a desire to escape, because reality can be quite grey. And that comes through, even in the way Sweden has become such a strong place when it comes to creating games. The Swedish industry is bigger than it should be and that I believe comes from looking towards the fantastical.”

And the giant robots?

“In the case of Sweden, a lot of things are ways to characterize the ‘Enemy in the East’ that was the bogeyman during the cold war.” 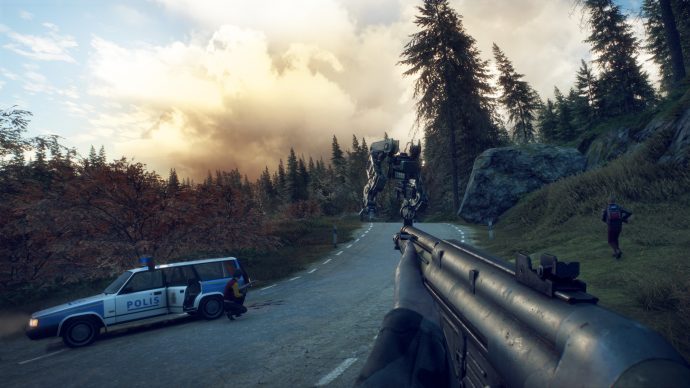 These stories about how the setting grew organically from Kraftling and other’s personal experiences certainly sound good. We were told Generation Zero’s high concept is an evolution of the stealth systems present in Avalanche’s theHunter: Call of the Wild. (“What if you’re the one being hunted”?). The design necessitates a relentless, imposing foe, and science fiction has a wider appeal than hunting, and so, enter big robots and stuff. And, yes, a lot of the team were nerdy kids in the 80’s. All the elements are there for Generation Zero’s setting to have been arrived at independently.

And yet, it’s difficult to take Kraftling’s words at face value given the number of clear similarities. Instead, I will say this: I believe games are more than their high level concepts. However the project came to be, this is undoubtedly Kraftling and Avalanche’s baby now. Generation Zero has a tangible mood that’s hard to imagine rising purely from cynicism and pastiche. It also makes it very enjoyable to blow up things, and it’s hard to stay cynical for too long when you’re throwing makeshift grenades at giant robots while sporting a glorious mullet.